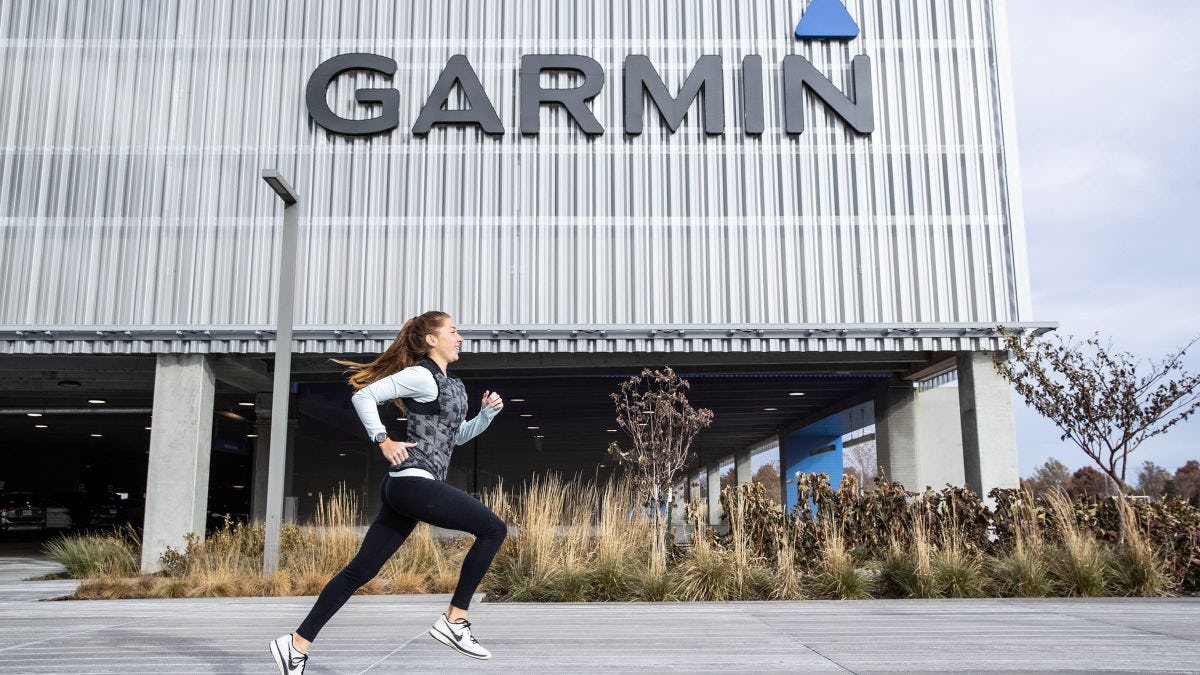 Amy Regan '17, on a run at the Garmin campus, will compete in the U.S. Olympic Trials for the marathon on February 29. Photo: Jake Martin, Garmin

She captured an astounding six national championships for cross-country and track and is one of the greatest athletes ever to have walked the Stevens campus. But Amy Regan ’17 never dreamed of Olympic glory.

Then she recalls that moment back in February 2016. She and her Stevens coach Justin Wood were blazing along the Jersey City waterfront, on one of those early morning runs she loves so much, when Wood said: Four years from today, you’ll be at the Marathon Olympic trials racing with the best distance runners in the U.S.

Regan had never run a marathon at that point and didn’t even compete in a marathon until this past fall. But this February, Regan will fulfill her coach’s promise.

In her first-ever marathon in Moline, Illinois, last September, in the pouring rain, Regan posted a time of 2 hours, 44 minutes and 20 seconds — a time that qualified her for the upcoming U.S. Olympic Team Trials on Feb. 29, 2020, in Atlanta. With up to 600 elite runners predicted to participate, the top three female and top three male finishers will claim a spot on the marathon team and compete for the gold at the 2020 Summer Olympic Games in Tokyo. 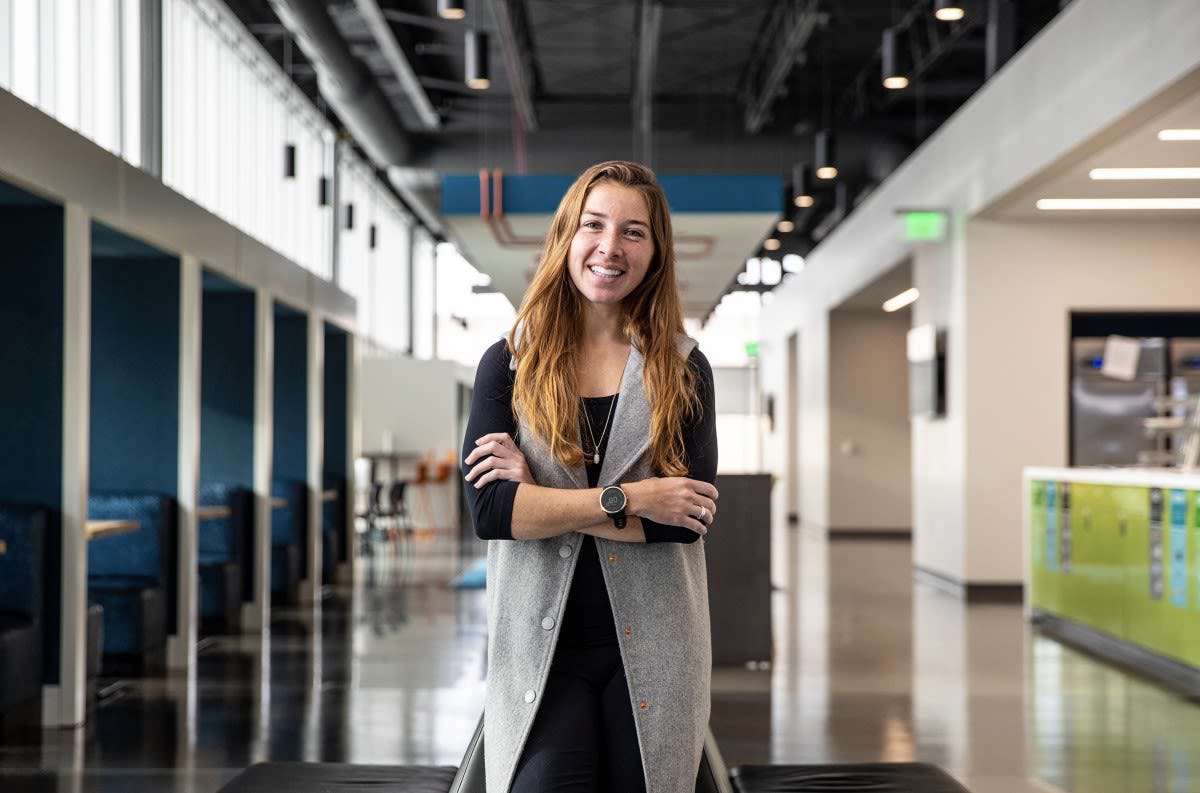 When reached by phone in November at her new home, Kansas City, Regan spoke of gratitude. The competitive nature of running, even at this high level, has never held deep intrinsic value for her, she says. But giving her best in every race is her way of expressing her deep appreciation: to Wood, to her family and to everyone who has supported her during her extraordinary athletic career.

“It’s completely changed my life,” she says of running. “It’s a way to say thank you for what running has brought to my life.”

And as for the Olympic trials, “it’s a culmination of my collegiate career.” Because running, Regan reveals, is the “backbone of my life.”

Running is indeed the thread that connects many areas of her life, from her volunteer work, friendships — even her career. Regan works as a program manager with Garmin International, the Olathe, Kansas-based technology company known for its innovative and diverse GPS technology products, from running watches that measure heart rate and blood oxygen level, to wearable maps that locate hiking trails, satellite communicators for campers who want to go off the grid to auto GPS and flight decks for aircraft.

Regan works with the Engineering Business Development team, with a focus on bringing in technology and practices to the company to support new product development. She loves the exposure to exciting technology and how her role helps support pretty much every product Garmin makes.

Her marathon training and high weekly running mileage are an added bonus for helping test a number of Garmin’s running watches. The Garmin Fenix 6S was her training partner for her first marathon this past year and is essential for helping her prepare for the upcoming Olympic Trials, she says.

“I’m passionate about being on the inside of this innovation…I know the impact of the watch on my wrist,” she says.

Working at Garmin is like being at a “30-year-old start-up” where there’s great dedication to high-quality engineering and design, she says. The company also aligns with her active lifestyle, with a large fitness center on campus, yoga classes, and employees regularly running or cycling on their lunch hour.

She loved the company enough to transplant herself from her native New Jersey to the Midwest, which she has come to embrace for its friendliness and accessibility.

“I absolutely fell in love with the company and the culture, the people and the products,” she says of Garmin. It’s an atmosphere where an elite athlete like herself feels supported, as she trains for the race of her life.

During her conversation with Stevens in November, Regan noted that she had just started a training program that involves running 60-80 miles a week. Wood, who now coaches at the University of La Verne in La Verne, California, coaches her long distance, via phone and email.

Regan doesn’t train at a facility and prefers to run on the open road and surprisingly hilly trails around Kansas City.

The Green Brook, New Jersey, native grew up playing soccer, while her mother and brother were the runners in the family. She also played tennis and golf with her father; they were always active. Soccer was her sport in high school — she ran track to keep in shape — but she decided to join the cross-country and track teams at Stevens as a way to make friends. With Wood as a coach, a love of running fully blossomed and she soared, becoming a national superstar in cross-country and track and a 14-time All-American — with a 3.8 GPA.

The close-knit community at Stevens, and its engineering management program, were a great fit for her. “I never expected the opportunities in my athletics career to unfold like they did. I think that Stevens prepared me to be exactly where I am today,” she says. “No other university could have done that.”

Regan has now fully embraced her new community in Kansas City, coaching young girls through Girls on the Run, a non-profit for girls grades 3-8 that encourages them to participate in community service and embrace a lifetime of fitness.

Looking ahead, Regan plans to continue competing on a national level, for as long as she can. At 25, she is considered young for a marathoner.

She says she will never stop running.

“The freedom to run on an open road and explore a new city is what I love about this sport,” Regan says. “I just love to run. It’s given my life structure and discipline. To get up every day and get out the door — it’s a commitment to yourself. There’s a special cadence and rhythm to it. It’s calming and therapeutic to me.”