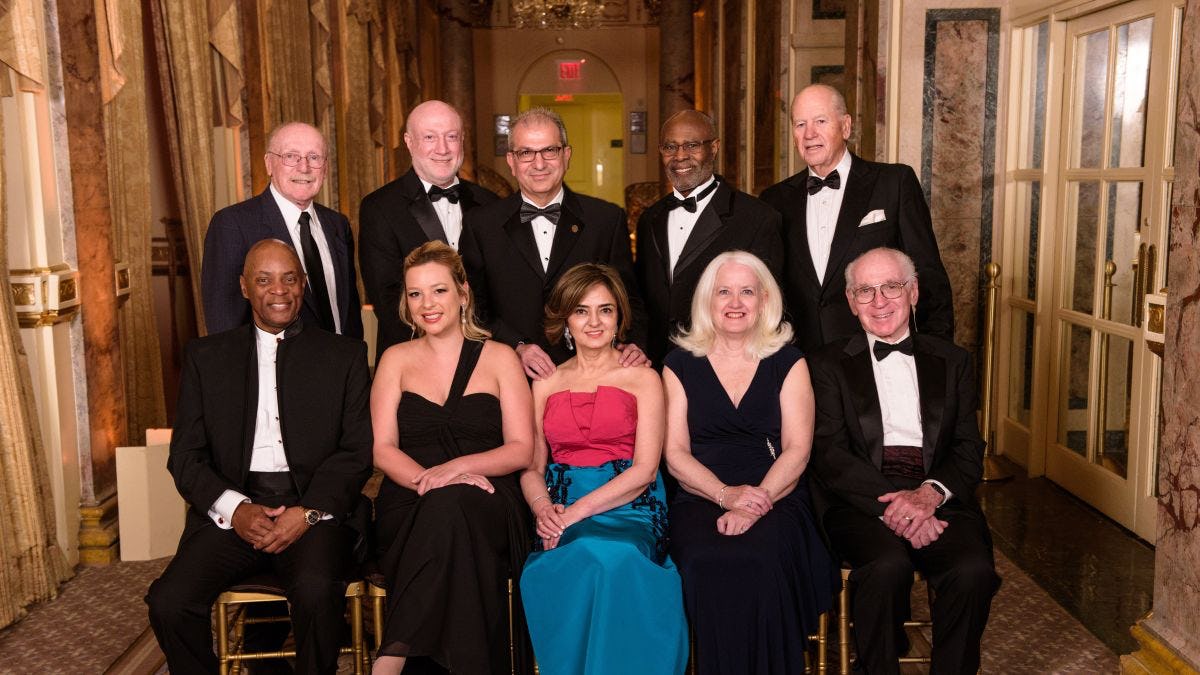 There were messages of hope and gratitude, reflections on the past and optimism for the future at the event of the year for Stevens Institute of Technology. College of Arts & Letters dean and jazz saxophonist Dr. Kelland Thomas played killer saxophone, and one honoree enjoyed a surprise serenade of “Cumpleaños Feliz” (Happy Birthday). It was the Stevens Awards Gala at the Plaza Hotel in New York City — and it did not disappoint.

Close to 400 alumni, students, faculty, staff and friends gathered to see Stevens honor 11 award winners — ten of them alumni — on April 8 for their extraordinary professional achievements or for their support of Stevens that has been game-changing for the university. 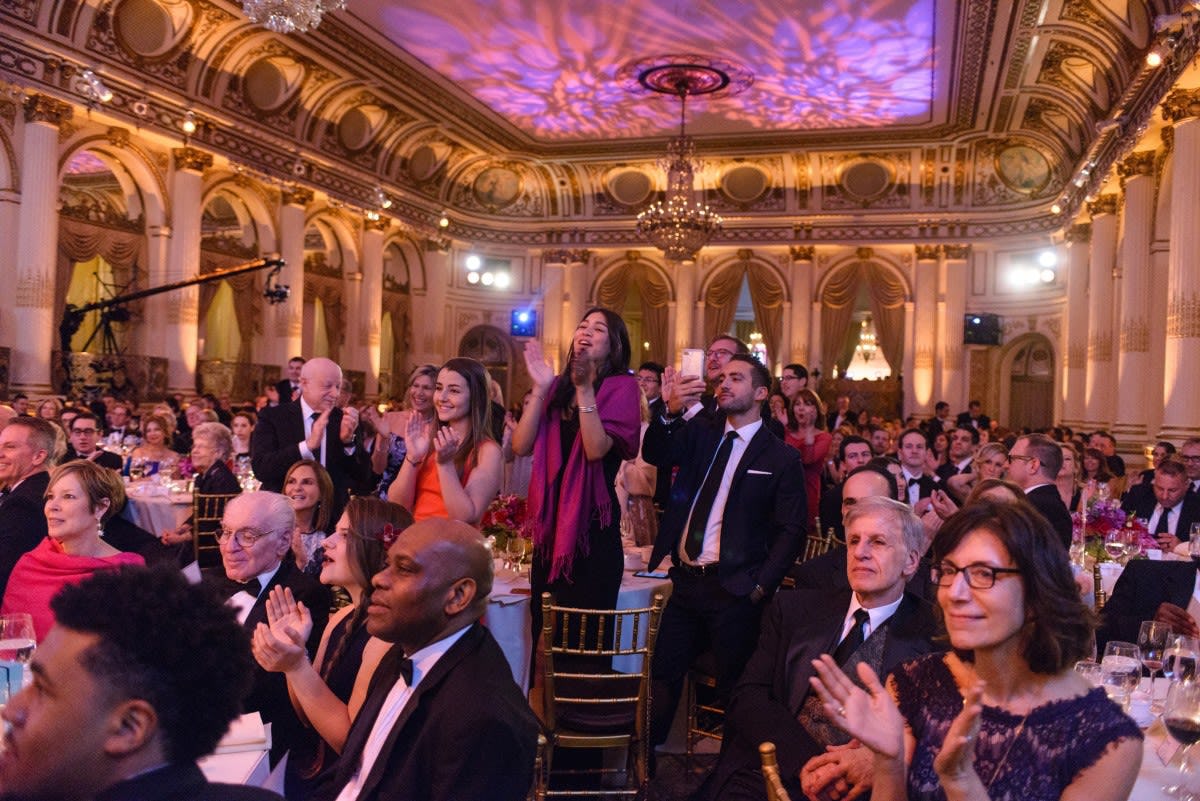 Shulman, a former vice chair of the Stevens Board of Trustees and strong supporter of the Stevens School of Business, received the Outstanding Contribution Award — and helped set the tone for the evening.

“Tonight is the fulfillment of a big dream … it’s a dream for Stevens,” he said. “We’re in New York City at a gala with 400 people.” He reflected on how far Stevens has come over the past five years to now, this moment.

“We always knew that Stevens was a powerhouse,” he said. “For me, this is a lifetime dream fulfilled.”

Gurevich, recipient of the Young Alumni Achievement Award, entered Stevens at 17 and called it her “first domino” on her journey to entrepreneurship, leading to her founding of SPHERE Technology Solutions, which offers data governance, compliance and security services to Fortune 100 companies.

“It taught me how to stay focused and how to test myself and over-achieve,” she said of her Stevens experience. “I somehow built something from nothing.”

Gurevich’s path at Stevens was paved by Stevens’ first class of undergraduate women, who came to campus in the fall of 1971. Connolly, who received the Distinguished Alumni Award, Academia and Government, was a member of that pioneering class of 13 women and went on to much professional success as director of Mtech Baltimore, an initiative of the Maryland Technology Enterprise Institute at the University of Maryland that fosters entrepreneurship in biomedicine. This evening, Connolly reflected on the responsibility that this first class of women felt and honored her fellow classmate and longtime friend Malena Aldecoa Higuera ’75 MMS ’78 and her own two daughters. All came out to support her that evening.

“You two are my best accomplishments,” she told her daughters.

Weston, the retired chairman and CEO of Automatic Data Processing and a prominent philanthropist, was honored with the Friend of Stevens Award for his longtime support of the university, including his leading support of the Pinnacle Scholars program. The scholarship program attracts the best and brightest students and offers them special opportunities such as the chance to study abroad or do research.

While Stevens thanked him for his steadfast support, Weston took a moment to thank all of the “STEMsters” in the country and in the audience that evening. Engineers, scientists, technologists – about 1 percent of the U.S. population – allow 99 percent of the rest of the country to enjoy cell phones, GPS and other technological innovations that help to make life better.

“You’ve helped the country enjoy a quality of life — you’re doing well for the rest of the country,” Weston said. “They should salute you more, but I salute you.”

Many of the honorees, some of them Stevens scholarship recipients, urged their audience to use their considerable talents to serve others.

Noble, a chemical engineering professor at the University of Colorado, Boulder, and winner of the Distinguished Alumni Award for Engineering, noted that he never met the people who supported his Stevens scholarship. But he is filled with gratitude to this day and tries to give back. He supports Voices for Children, a non-profit that helps to stop abuse and neglect and find safe homes for children.

“Everyone in this room benefited from society. Think about how you can give back,” he said. Noble urged the audience members to use their formidable Stevens problem-solving skills to help others, whether they coach a baseball team, support scholarships or protect children from abuse and neglect.

Warde, an MIT electrical engineering professor who received the Distinguished Alumni Award, Science & Technology, shared the turning point of his life — the day he met a couple on the beach in his home country of Barbados. They urged him to apply to American universities, and he received a scholarship to Stevens. Now, he is driven to encourage young people to pursue science careers.

“Our goal is to give back 1,000 times more than what was given to us,” he said. “We’re going to persist and hold this up to kids in the Caribbean to show them what is possible.”

Several honorees, like Nate Davis ’76, shared moving personal stories. Today, this Stevens Honor Award winner is a great advocate of STEM education, through his work as the executive chairman of K12, an education software company, and in his philanthropy and community service with children in need.

He told a story of his mother — a teacher who entered Tuskegee Institute at age 16 — marching to his school to confront a guidance counselor who told Davis, a top student, not to pursue college. He spoke of the future need for STEM workers, and the urgency in reaching out and exposing African-American and Latino students to these careers.

“We need these types of jobs to be more visible to these students,” Davis said. “We all feel that we should do more.”

Bandel, the retired chairman and CEO of the Cisneros Group, received the International Achievement Award and celebrated his birthday with an international entourage. Old friends from Stevens’ Latin American Club cheered him on, traveling from Honduras, Peru, Spain and Washington for the evening.

He saluted his friends and his parents, Holocaust survivors who helped their son become the first in their family to attend college.

“I was their hope and dream for all of us,” he said.  “They would have been very proud.”

The evening’s most prestigious recognition, the Hall of Achievement, went to Calder, who is perhaps Stevens’ most famous alumnus. This favorite artist of Einstein invented the mobile — suspended kinetic sculpture — and created monumental sculptures that grace spaces across the world, from Los Angeles and New York to Caracas, Paris, Berlin and Tel Aviv.

Stevens’ Williams Library is home to several of Calder’s works, and Stevens First Lady Hoveida Farvardin, who represented the Calder family that evening, invited all to visit these treasures.

She closed with Calder’s words: “To most people who look at a mobile, it’s no more than a series of flat objects that move. To a few though, it may be poetry.”

Students and alumni said they were moved by the accomplishments and heartfelt gratitude of the awardees. Student Maria De Abreu Pineda ’17 found inspiration.

“All of them were wonderful — they’re so inspiring,” she says. “I have to work hard, and I can get there.”

To learn more about this year’s Stevens Awards Gala honorees and to see photos from the event, visit stevens.edu/awardsgala.