This Coop is The Safest, Easiest Way to Raise Chickens Yet 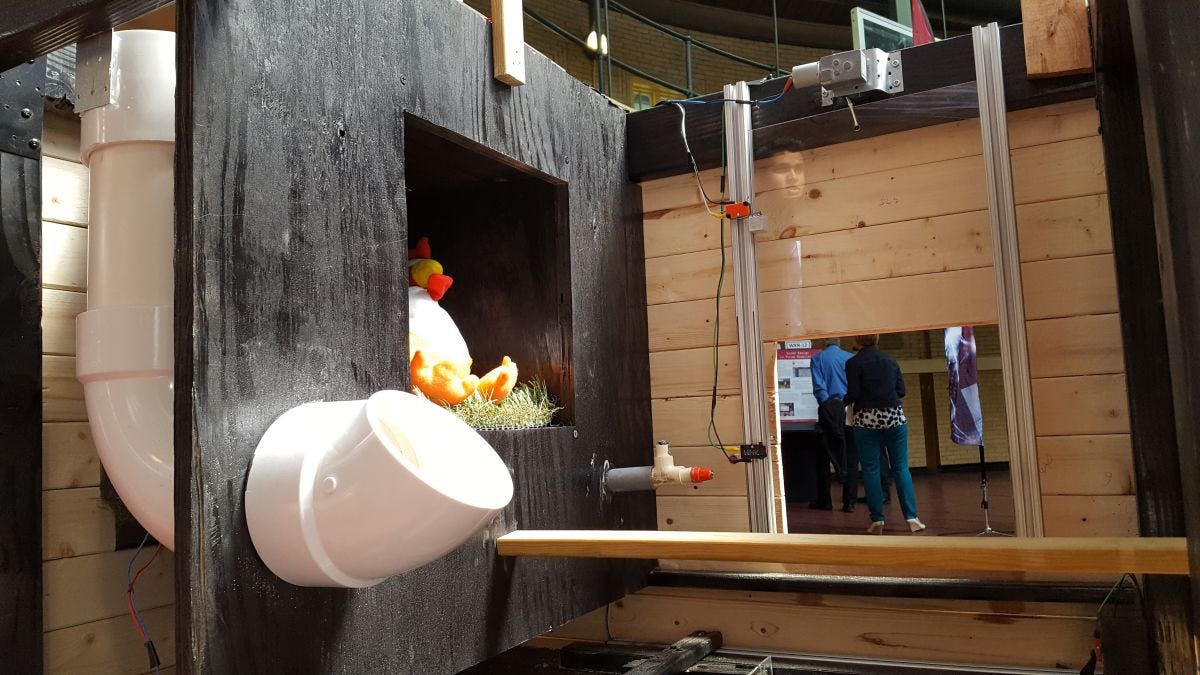 The inside of the Chick-Inn. CREDIT: Anthony Fontana.

“I thought chickens were pretty stupid.”

Now? “That was before,” he admits.

McKenna, along with fellow mechanical engineering students, Ravi Shah, Dustin Heitner and Anthony Fontana teamed up to build a safe, automated chicken coop under professor Maxine Fontaine’s guidance. The idea came from Fontaine’s own difficulties raising chickens in her backyard:

It’s tough to find a chicken-sitter. Chickens are low-maintenance pets, but to keep them safe, you need someone to lock up the coop at night and then open the coop door in the morning. You’d need to find a really good friend who would be willing to visit your house twice a day!

“Chickens like to come out in the early morning, like the crack of dawn,” Shah confirmed. “Dusk hits and they can’t see really well. You have to open and close the doors of their coop at really odd hours.” For someone with a commute—or who isn’t a morning person—chickens can be difficult to care for properly.

Chickens are also notorious poopers. They will poop in their own food and water, which the team laughingly admitted. “You hide the water,” McKenna advised. The food hole should be “just a small opening,” Shah said. “They’ll contaminate it if it’s available everywhere.”

The team also wanted to create a better environment for chickens, period. “We did a lot of research about the conditions in factories,” Heitner said, “which gave us more motivation. The project started as a “go on vacation for a week” system and evolved to “humane way to raise chickens.”

That research became the focal point of their project: 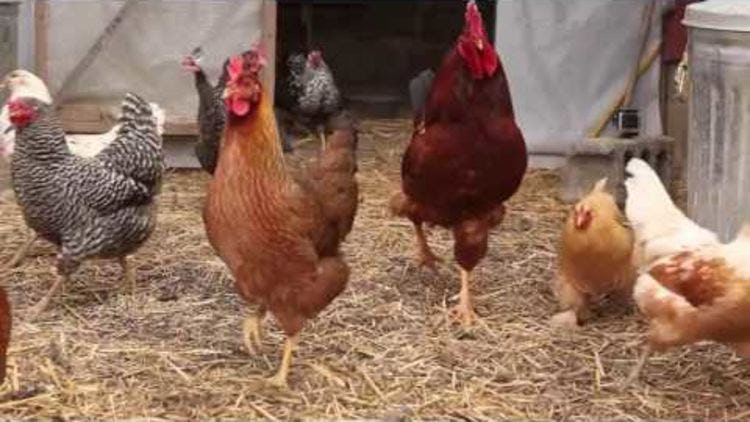 All of those factors added up to an opportunity for the team: create a solution for chicken owners that would be automated, safe and sustainable—and maybe even inspire more people to own chickens.

The team jumped on that opportunity. Dubbing their project the Chick-Inn, they started learning about chickens. Of course that involved visiting professor Fontaine’s coop. 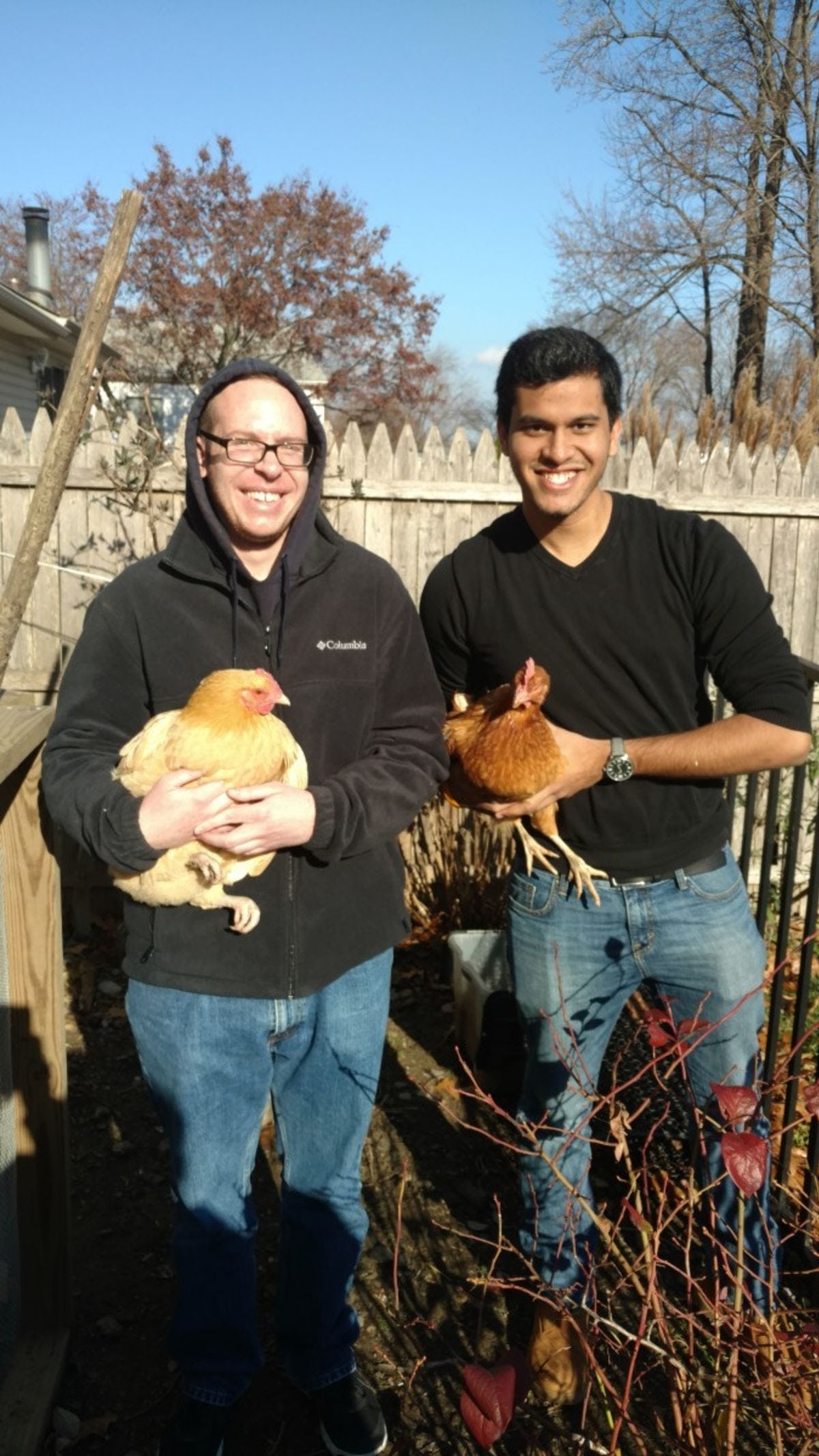 Next, they had to figure out how to build a chicken coop. “I met with electrical engineering professors, design professors, perused manuals from old classes,” Shah said. “I basically tried to learn more about everything.”

“We’re applying all we’ve learned from all our classes,” Heitner added.

Team Chick-Inn is finishing their build right now. They expect to have a fully functional coop on display at the Expo. “By [the Expo], we want this ready for someone to buy and develop,” Heitner said.

Their prototype coop will be built out of wood, which the team admits is heavy and not sustainable, “but we thought it could be injection molded [in the future],” Heitner said. “That’ll bring the price down, look nicer, and make it more transportable.”

The biggest selling point of the coop is its multiple automation systems: one for opening the door at dusk and dawn, one for feeding, one for water, and even one for waste removal. Getting those systems to work together wasn’t easy. “I was the electrical and programming “expert” because I had one percent more knowledge than the rest of the team,” Shah said. “That’s a big learning curve.” 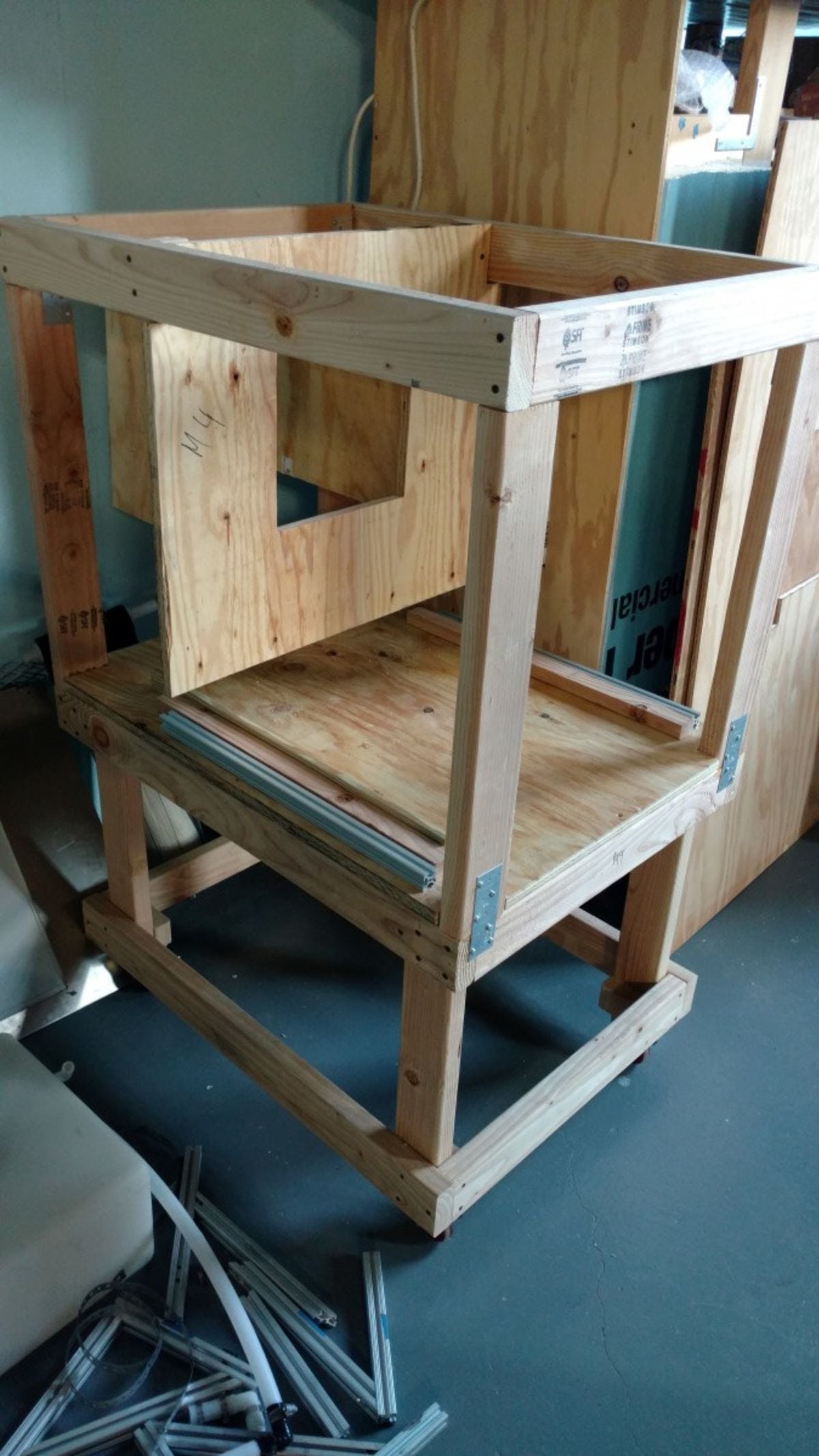 The Chick Inn frame, prior to paint and wiring. CREDIT: Anthony Fontana. 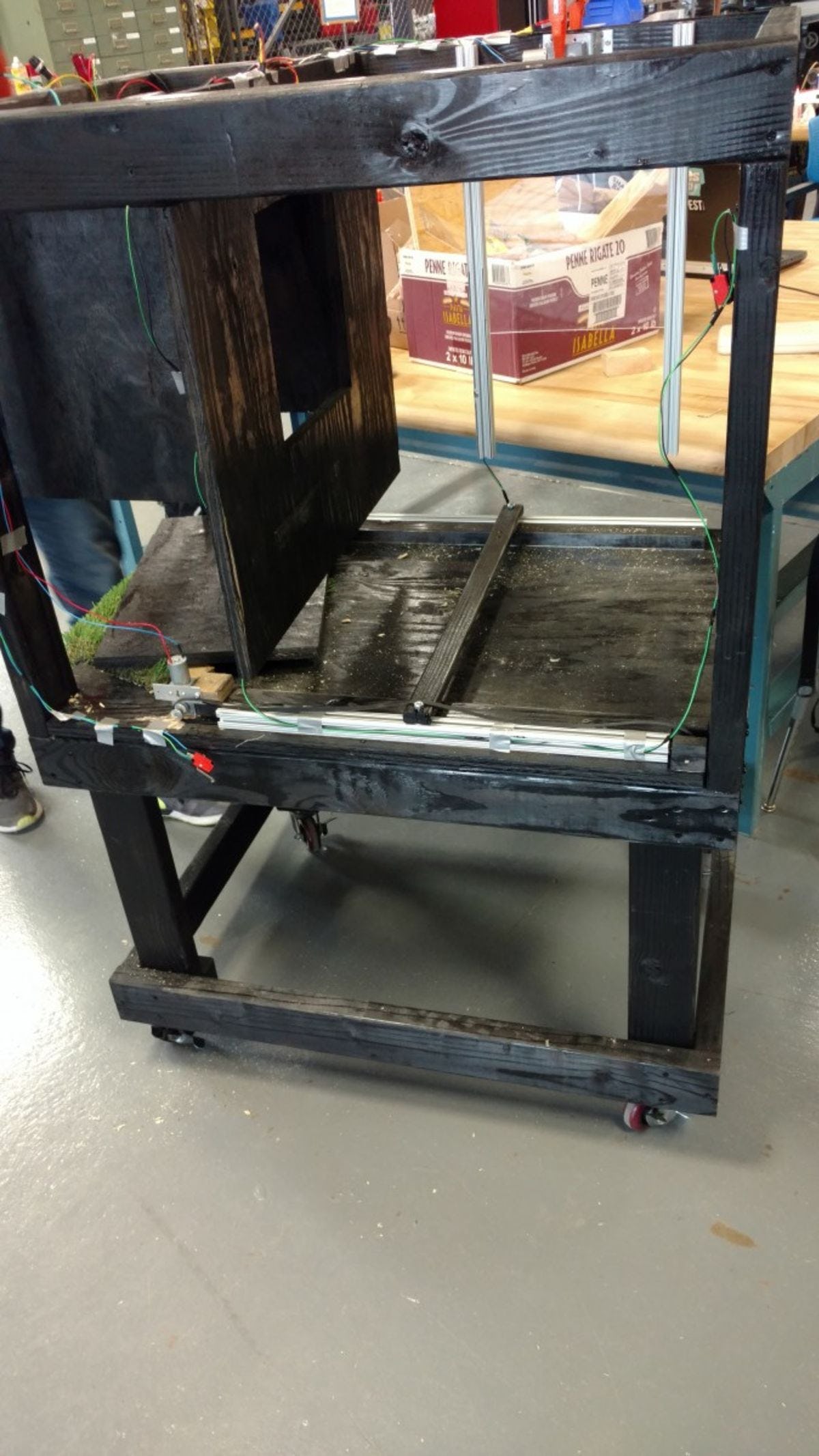 Another learning curve? Door speed. “One of the things we learned was that we didn’t want the door to close and snap the chickens’ necks,” Shah said. Thankfully, Professor Fontaine had the idea to trap chickens in a box and lower doors onto them to test the speed. “They were able to avoid what we metaphorically threw at them,” Shah said. The chickens were even able to beat the team’s design. “We can even bring the door up only 2 or 3 inches and they can squeeze their way out,” Fontana added.

The team also solved the water contamination problem, making the Chick-Inn’s water system “like the water system in a hamster cage,” Fontana said. “The water comes out of poultry nipples,” Shah added, “so the chickens only drink a drop or two at a time.”

Best of all, users won’t have to reset the system every night. “You really don’t have to do anything for a week,” Heitner said, citing their original intention to make the system vacation-friendly.

Sadly, some challenges were simply too big to tackle. “We wanted to be reasonable about what we could accomplish,” Fontana explained, citing a feature the team had to scrap because of time constraints: a robotic arm to collect eggs chickens laid outside the coop. That happens at least once a day, according to the team.

But scrapping features wasn’t the biggest challenge the team faced.

“The biggest struggle we’ve had is with the professors on our panel,” Heitner said. “They see this design and they think it’s so basic and simple. At the end of the day, it is. We’re putting together things that are simple and making it useful. In the real world, we design things not to be super cool or fancy - we do it so it’s the cheapest and it works well. That’s what we’re focusing on.”

“We thought way ahead,” Heitner added. “Making the coop modular, or parts that are modular… that makes it inexpensive. That’s an incentive to grab the user. With zoning laws permitting, it could be a very easy way to own pets.” 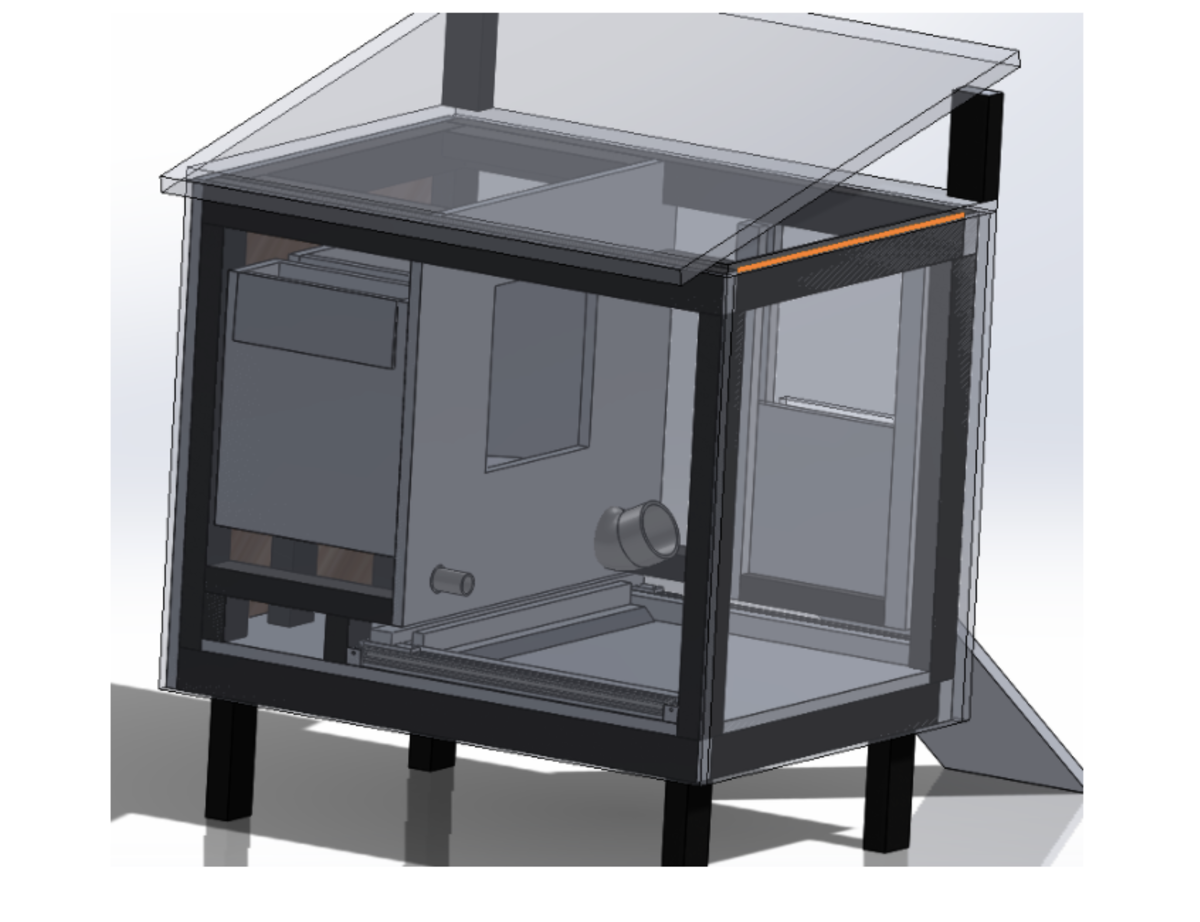 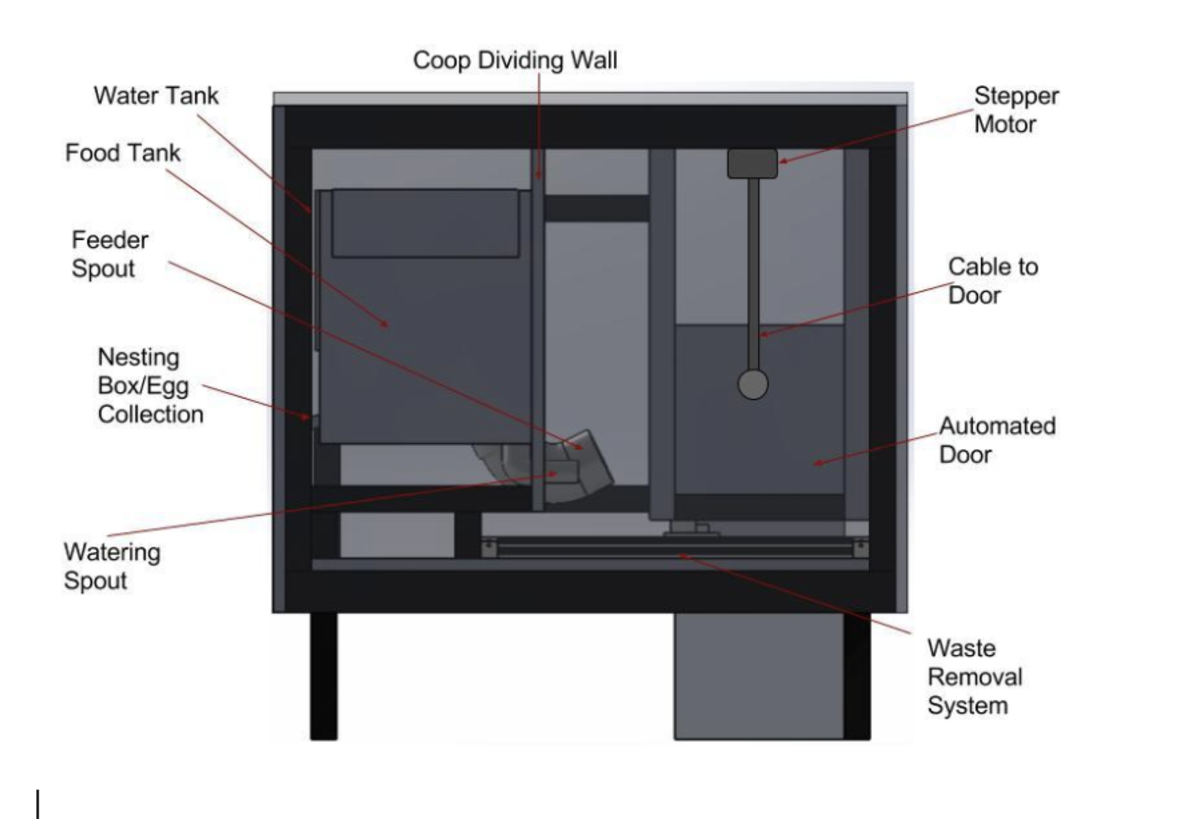 A detailed breakdown of the Chick-Inn model. CREDIT: Anthony Fontana.

“As of now, the coop’s future will be a thank you present to professor Fontaine,” Shah said. They have no incentives to create molds and further production of the coop.

“They’re pretty smart,” Fontana agreed. “They can take a surveyance of their surroundings [and] get an understanding of what’s going on.”

“You could pet them,” Heitner added. “You could give them treats. They even dig holes like dogs do. Honestly, they’re like real pets.”

Hopefully the team’s enthusiasm and smart design will inspire future iterations of the Chick-Inn. For now, they’ll just have to settle for creating something new and useful -- and, of course, learning far more about chickens than they ever thought possible. 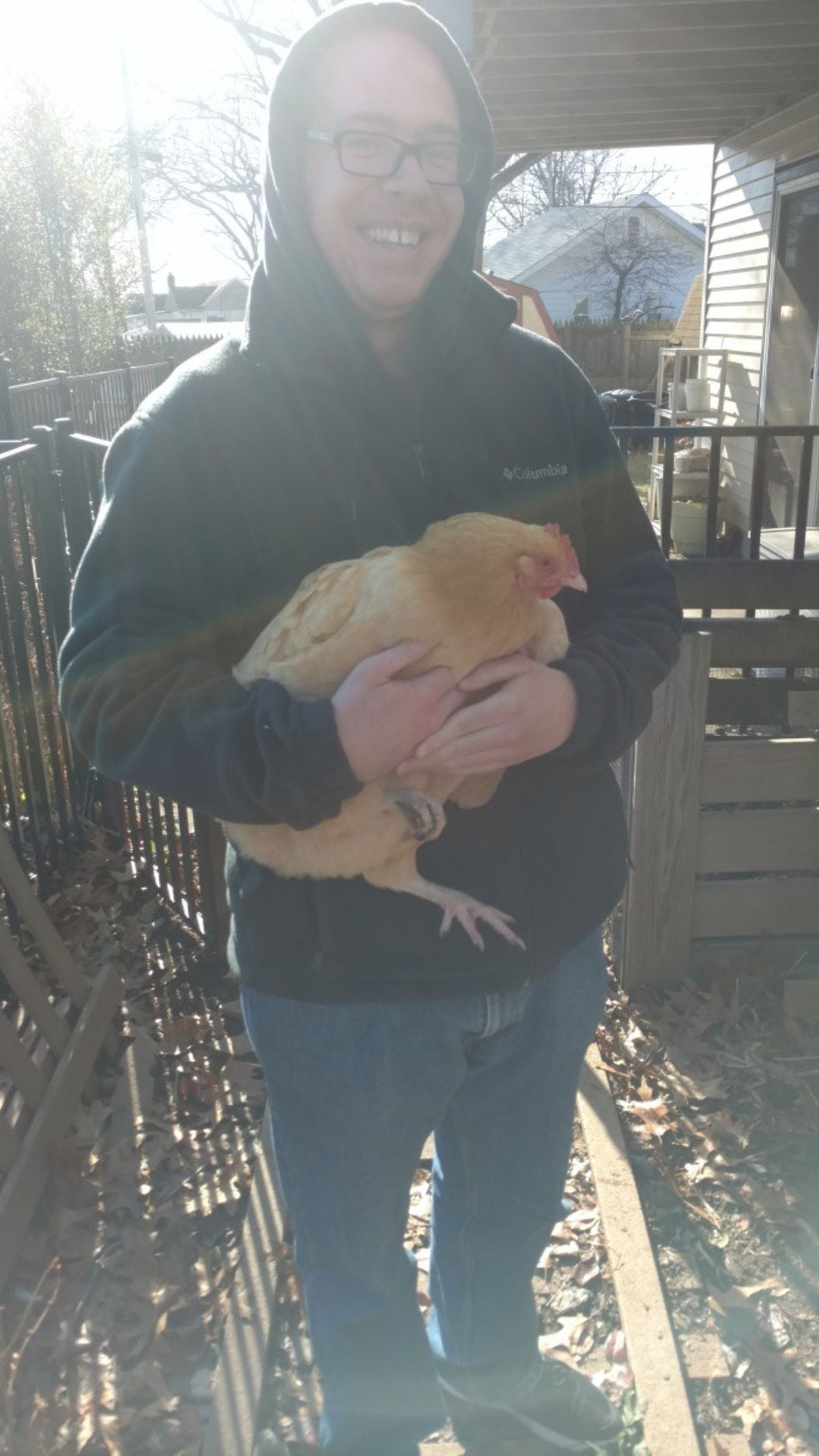 McKenna wasn't the only one who came around; this chicken took a liking to him, too. CREDIT: Anthony Fontana.