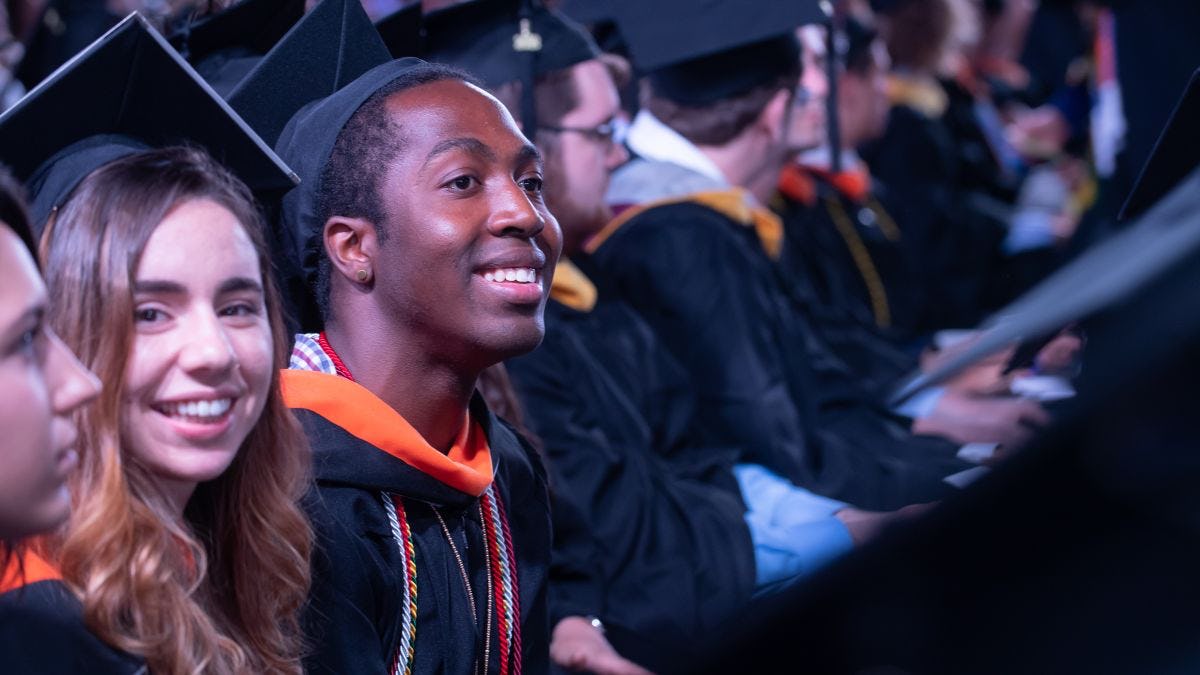 Stevens Institute of Technology Class of 2018

The graduates of Stevens Institute of Technology’s Class of 2018 will soon make their mark on the world in many ways. They will apply their education and training to build sustainable, safer communities through green infrastructure design; engineer and construct soaring skyscrapers that will transform city skylines; develop (https://www.stevens.edu/news/stevens-students-design-smart-implant-knee-joints "Stevens Students Design "Smart" Implant for Knee Joints") that will save and improve lives; and introduce new ways of experiencing art and music. The diversely talented, forward-thinking men and women who comprise this year’s graduating class are driven and supremely capable of helping to change the world for the better. 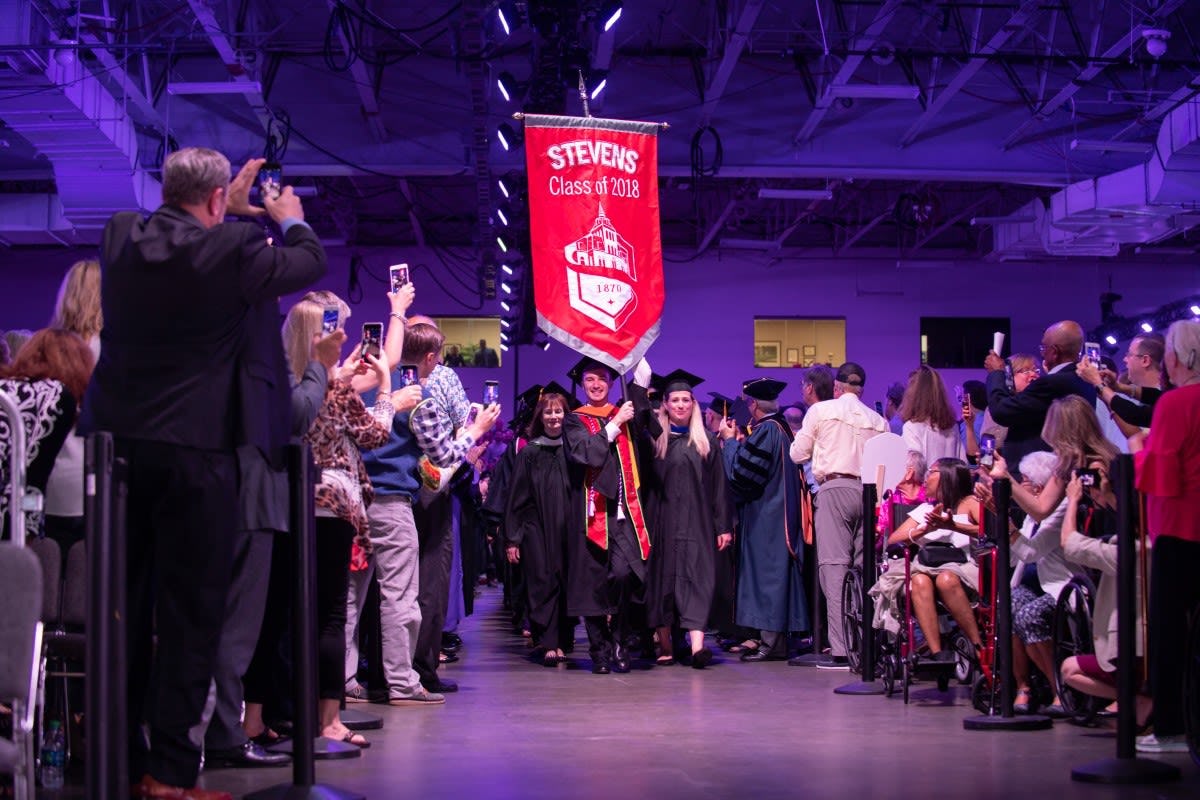 Led by the Class of 2018 banner, students process into the arena during the Academic Procession.

To celebrate their achievements and wish them success in their future endeavors, the Stevens community gathered to commemorate the graduation of approximately 1,800 undergraduate and graduate students at the Meadowlands Expo Center in Secaucus, New Jersey on May 23, 2018.

This year’s ceremonies included the awarding of three honorary degrees, the recognition of four undergraduate students for outstanding academic achievement, and an appearance by members of the “Old Guard,” an elite group of Stevens alumni who graduated from the university more than 50 years ago.

The milestone day began with the undergraduate commencement ceremony in late morning, as beaming family members and friends greeted an academic procession of more than 600 Stevens undergraduates with rousing applause and exuberant cheers.

In his welcome address, Stevens President Nariman Farvardin congratulated this year’s graduates on their achievements, wishing them success in the next phase of their journeys in life. He also asked that parents, family members, friends and faculty rise so that they too could be recognized for contributing to the graduates' success.

Countering complacency and becoming a change-maker

The undergraduate commencement speaker (and recipient of an honorary doctor of philosophy degree) was Roger Ferguson, CEO and president of TIAA — the leading national provider of retirement services in the academic, research, medical and cultural fields. 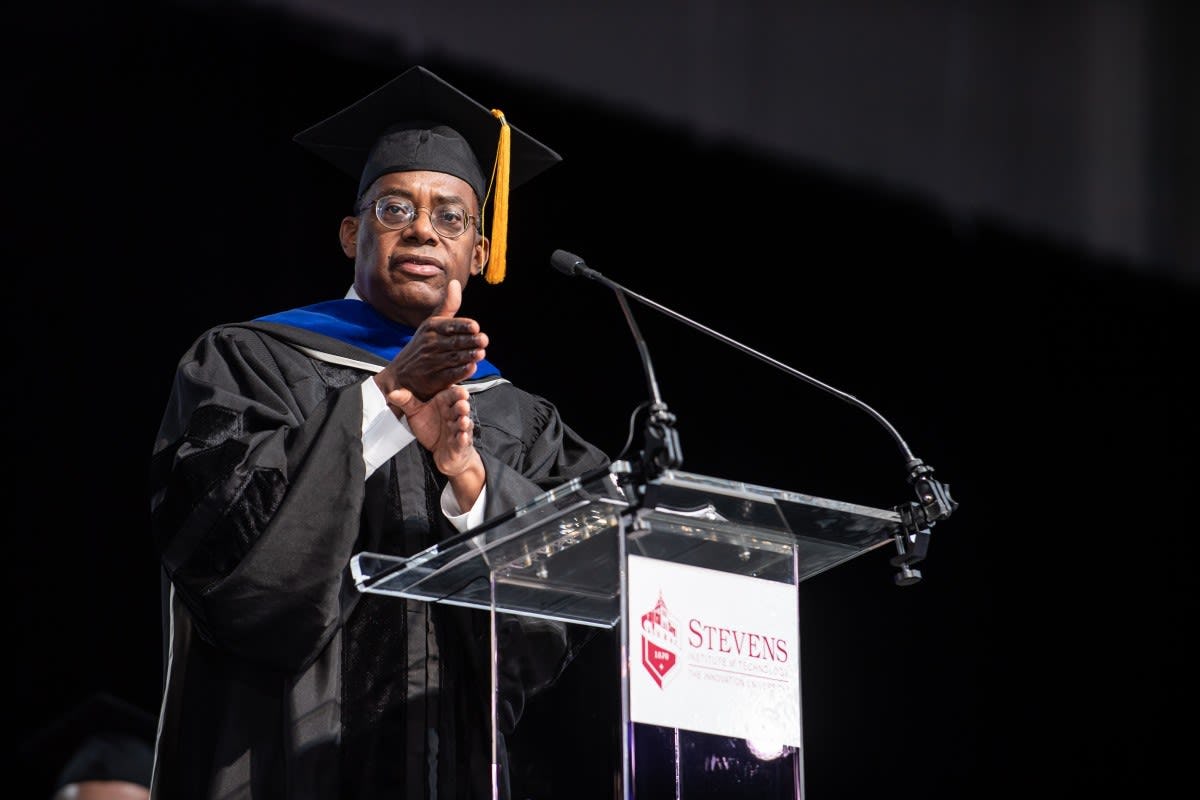 An influential figure in the financial world, Ferguson served as vice chair of the Board of Governors of the Federal Reserve System from 1999 to 2006, and was the only member of the Board of Governors in Washington, D.C. when the 9/11 terrorist attacks occurred. By leading the Federal Reserve’s initial response to the crisis, he took actions that safeguarded the nation’s financial system.

Describing Stevens as “a pioneer and leader in creating the technological innovation” that has powered this nation’s success, he reminded graduates they possessed all the tools needed to succeed and become change-makers in a world “characterized by constant change.”

“Armed with a Stevens degree, you are now exceedingly well-equipped to go out and live the Stevens legacy by helping to create the future,” Ferguson told the assembled graduating seniors.

He cautioned against the dangers of complacency, imparting a number of lessons learned from missteps made early in his own career before urging graduates to always aim to be satisfied, never self-satisfied.

“Being satisfied is being proud of yourself, pleased with your achievements, and grateful for what you have and who you have in your life. It will keep you engaged and moving forward toward being a problem solver and a change-maker in our world,” he said.

Self-satisfaction, on the other hand, can be a danger to one’s job performance and career ambitions, warned Ferguson.

“It will keep you narrowly focused on yourself instead of on making a difference in the world.”

He concluded by telling the soon-to-be graduates, “You have the intelligence, the drive and the determination to make an impact. I hope you will use it all to be a change-maker in our world.”

Four undergraduate candidates in the Class of 2018 shared the honor of being “first in class,” having attained the highest grade point averages among this year’s new graduates. 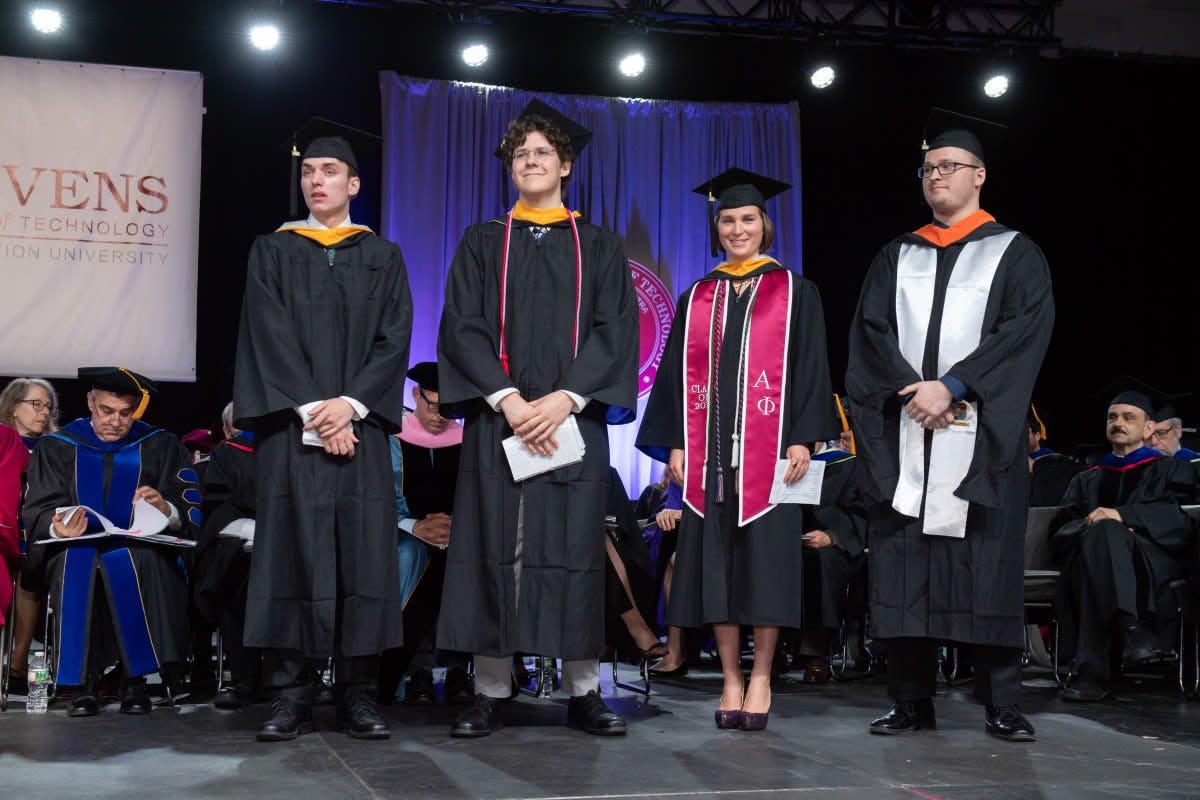 Marko Djapic of Goshen, New York, who earned a bachelor’s degree in chemical biology, will pursue a career in dentistry and attend Rutgers School of Dental Medicine. He spoke of longevity, telling his fellow graduates, “Embrace your youth the way bulls lock horns: with vigor, passion and a burning desire. We’re just at the cusp of a new beginning.”

Katrina Guido of Macungie, Pennsylvania graduated with a bachelor’s degree in physics and will pursue a Ph.D. in electrical engineering at The Ohio State University. She urged classmates to think about the individuals who had made the day possible for them.

“Don’t forget to thank those people and celebrate them just as much as they celebrate you,” she reminded.

Ian Porada of Evergreen, Colorado, who received a bachelor’s in computer science, will pursue graduate studies in artificial intelligence, machine learning and reinforcement learning at McGill University in Montreal. He spoke about the difficulties of adolescence and the need for supportive guidance during that vulnerable phase of life as he advised graduates to “be the person you needed when you were growing up.”

Later in the afternoon, family, friends and well-wishers joined alumni, faculty, administrators and staff as approximately 1,200 graduate degrees were awarded to doctoral and master’s candidates. 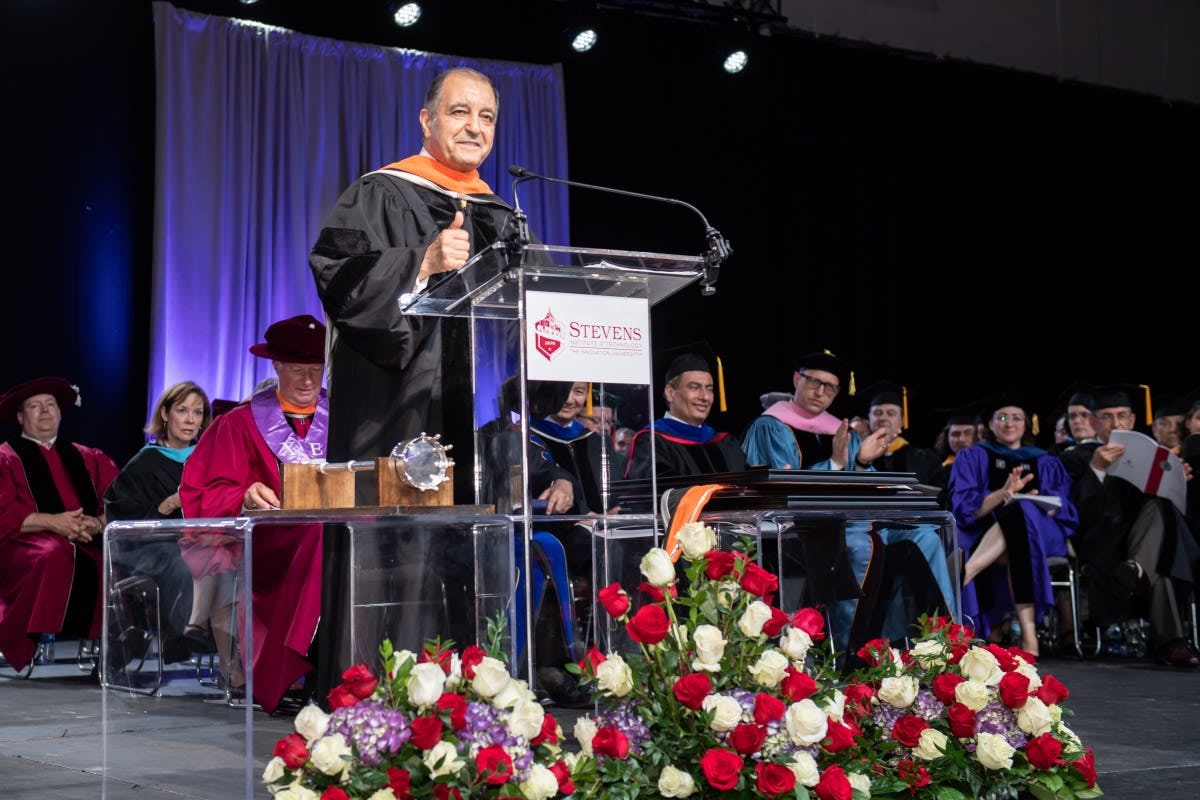 Seifi Ghasemi, chairman, president and CEO of Air Products and Chemicals, Inc., addressed the graduates with a stirring speech about global citizenship and the responsibilities that come with the roles of citizen and leader.

Ghasemi assumed his current position in 2014. Under his leadership, Air Products has developed into one of the most profitable industrial gas companies in the world, reporting fiscal year 2017 sales of $8.2 billion and a current market capitalization of approximately $35 billion.

He thanked the Stevens community for the honor of being selected as graduate commencement speaker and recipient of an honorary doctor of engineering degree.

Noting the international makeup of this year's graduating class, he urged the graduates to think and behave as citizens of the world when addressing global issues such as income inequality, diversity, immigration and the environment.

The world has become irrevocably interconnected and interdependent as a result of the scientific, technological, commercial and communications developments of the past 150 years, he noted. Crises that emerge in remote regions of the world no longer occur in obscurity, and “it is pure fantasy [to think] that a few of us can isolate ourselves and live in a corner of the world that is immune to these problems,” he added.

Ghasemi encouraged the new graduates to become involved, to learn in depth about the most pressing issues of our time, and to engage in the political process. (Quoting Plato, he warned how “One of the penalties of refusing to participate in politics is that you end up being governed by your inferiors.”)

“You can change the world," he noted. "Your generation has the intelligence and the energy to do that."

Yu-Dong Yao, a respected faculty member in the Department of Electrical and Computer Engineering since 2000, was awarded an honorary master of engineering degree. An internationally recognized scholar and researcher in wireless communications, cognitive radio and software-defined radio research, Yao has served as chair of the department since 2007. 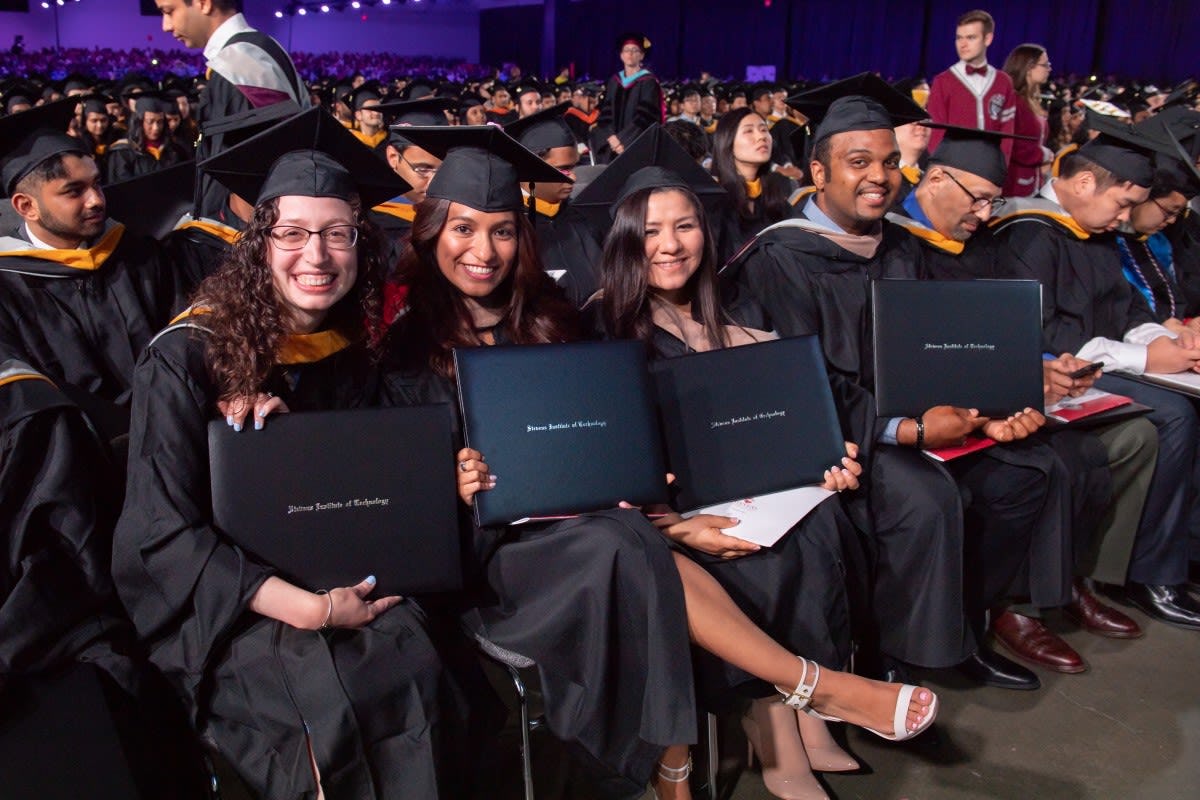 In his final message to the Class of 2018, President Farvardin reminded graduates how they will follow in the footsteps of luminary Stevens graduates such as Alexander Calder '19, who introduced the art form known as the “mobile”; Mark Crispin '77, inventor of the IMAP email protocol; and NASA pioneer Aaron Cohen '58.

“One can imagine the impact of innovations such as autonomous vehicles, routine commercial space travel, 3D-printed organs, brain-computer linkages and many yet-to-be-created innovations," said Farvardin, "that will constitute the next chapters in the story of the human race. And you will be authors of that story.”