As Stevens Institute of Technology celebrated the Class of 2022 at its 150th Commencement ceremonies, President Nariman Farvardin acknowledged that while the world is shrouded in uncertainty, the graduates’ futures are strong.

“I am not smart enough to predict the future, except to say that it is unpredictable. But I can say that the foundation you have put in place during your time at Stevens — the courses you have aced or struggled through, the professors that have guided you, the friendships you have made — are the stones upon which you will build your future,” he said. “They will lift you in your times of happiness and support you through your challenges. Know that Stevens and the Stevens community is your home base, and we are all here for you.”

The feelings of optimism and warmth permeated the four ceremonies — two for undergraduates on May 25, and two for graduate students on May 26 — held at the Meadowlands Exposition Center in Secaucus, New Jersey. More than 850 candidates received their undergraduate degrees, while nearly 1,000 students received graduate degrees and certificates. Thousands of family members and friends gathered to celebrate the graduates — and received their own acknowledgement in the ceremony.

“The Chinese have a saying: When you drink water from a well, don’t forget the person who dug the well for you,” said Senior Vice President for Academic Affairs and Provost Jianmin Qu, before hyping up the audience in a round of applause for parents, guardians, loved ones and friends in attendance.

One of those parents, Puneet Badlani, whose son, Saurin Badlani ’21, graduated in December with a degree in quantitative finance and walked in today’s ceremony, expressed an amalgam of feelings.

“I’m proud, excited, afraid because he’s leaving the nest,” Puneet said. “It’s a mix of emotions but overall, it’s such an accomplishment and now he’s going to be standing on his own two feet.”

Saurin, who is a business and integration architecture analyst at Accenture, said the choice to walk in the ceremony came down to one thing: “It was really important for me to come back and celebrate with my friends.”

Natalie Bernhard ’21 M.S. ’22, who graduated with a master’s in computer science, appreciates the opportunities Stevens gave her but is ready to move on.

“The best part of the day is that it’s finally over!” she said with a laugh. “I was admitted as a 4+1 so it’s been a great opportunity to be able to get my master’s in only one extra semester. But now I’m ready to get my career started.” Bernhard will start as a software engineer with IBM in Austin, Texas, in mid-July.

Hall of Fame Athlete Offers Wisdom From His Own Experience 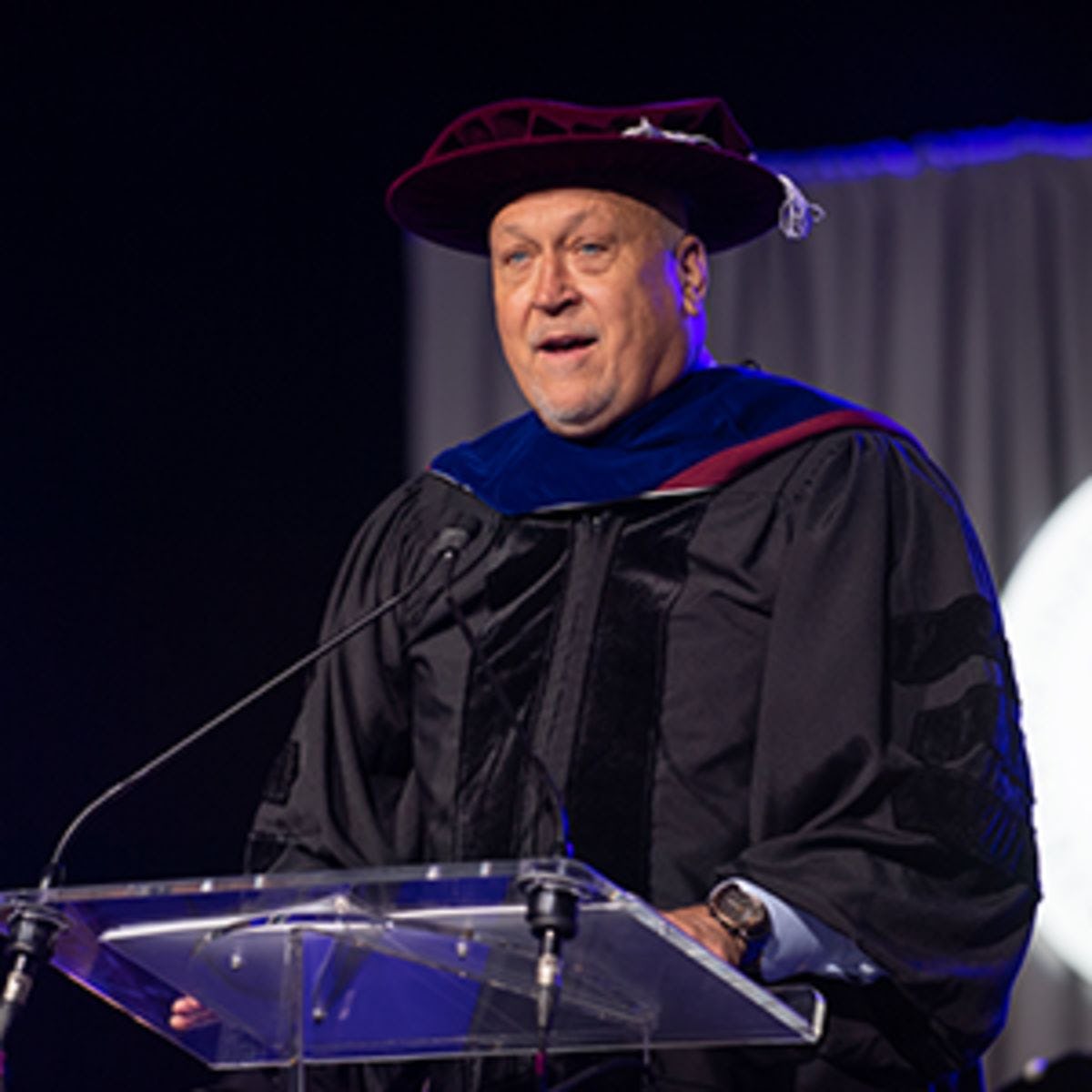 Legendary Major League Baseball shortstop Cal Ripken Jr. served as the undergraduate Commencement Speaker and was awarded a Doctorate of Philosophy, Honoris Causa in recognition of his unmatched professional accomplishments — a player with the Baltimore Orioles for 21 years, Ripken played a record 2,632 consecutive games, appeared in 19 All-Star Games and is a two-time American League Most Valuable Player — as well as his personal dedication to his local community, the game of baseball and the education of young people across this nation.

The first-ballot Hall of Famer used his own experience of working his way through baseball’s minor leagues and into the MLB as an example to share his message: Show up, have a positive attitude and define your talent and skill.

“Show up every day, through the good and the bad. Be the one everyone counts on,” he said. “And when you show up, show up with the right attitude.

Ripken is no stranger to Castle Point. His niece Miranda played basketball for Stevens and graduated in 2016, while his “bonus” son Trey played lacrosse and graduated this year. Ripken noted that he’s “proud to be part of the Stevens family” after receiving his degree.

“Stevens is a special place with special people. Over the past several years, [my wife Laura and I] have cheered you from the bleachers, marveled at your accomplishments, tailgated with your families and even attended the President’s breakfast with Martini. Now I would ask that you all take a moment and think about how you got here. Don’t let this day go by without expressing your gratitude to those who have paved the way for you to be sitting where you are at this moment in time.”

American inventor and entrepreneur Dean Kamen did not mince words in his Commencement speech to graduate students. “You have had the opportunity to attend a world-class institution, surrounded by brilliant people in a safe place to learn. That’s not an entitlement; it's an opportunity that creates an obligation to give back,” he said. “If your approach is to go out and conquer the world for personal gain, the world will continue to race itself to the bottom. The folks without your education can’t fix it because they have to worry about finding food and making sure their kids are safe. So sure, celebrate for a minute or two and then get back to solving the world’s problems.”

Kamen may be best known for inventing the two-wheeled Segway. He holds more than 1,000 patents and has invented numerous devices including the first insulin pump for diabetics and a wheelchair that climbs stairs. He is greatly admired in the engineering world for his science and technology advocacy, his imagination and his rebellious knack for doing the impossible. In 1989, he founded FIRST (For Inspiration and Recognition of Science and Technology), the world’s leading youth-serving non-profit advancing STEM education. So when he challenges graduates to work for the greater good of the world, he does so from experience.

“On the plane down, I wrote a list of 100 things you should do now that you graduated,” he said, pulling out a scroll of paper, several feet in length. “First, figure out an important problem to work on; don’t waste your time on nonsense. You’ll know it’s important when everyone around you tells you not to do it because it’s hard and unpredictable. Politely ignore their advice and find something important and do it.

“No. 2: Don’t give up,” he continued. “It’s going to be hard and you’ll see people around you with easy success, but don’t let it discourage you. And if you pick something hard that makes a real difference and never give up, the other 98 things don’t matter.”

Kamen also let the graduates know that he brought two scouts with him and needed to hire “a hundred engineers” for his nonprofit ARMI (Advanced Regenerative Manufacturing Institute), which manufactures engineered tissues and replacement organs. “Part of the reason I agreed to come down was I knew Stevens would have an enormous field of low hanging fruit and I need a lot of help to scale up. I actually applied to Stevens because I really wanted to live on the ship (the SS Stevens, which housed students from 1968 to 1975), but I was rejected. This must be a great school,” he said to laughs and applause.

Jokes aside, Kamen returned to his message of putting the good of others before personal gain, wherever the graduates end up. 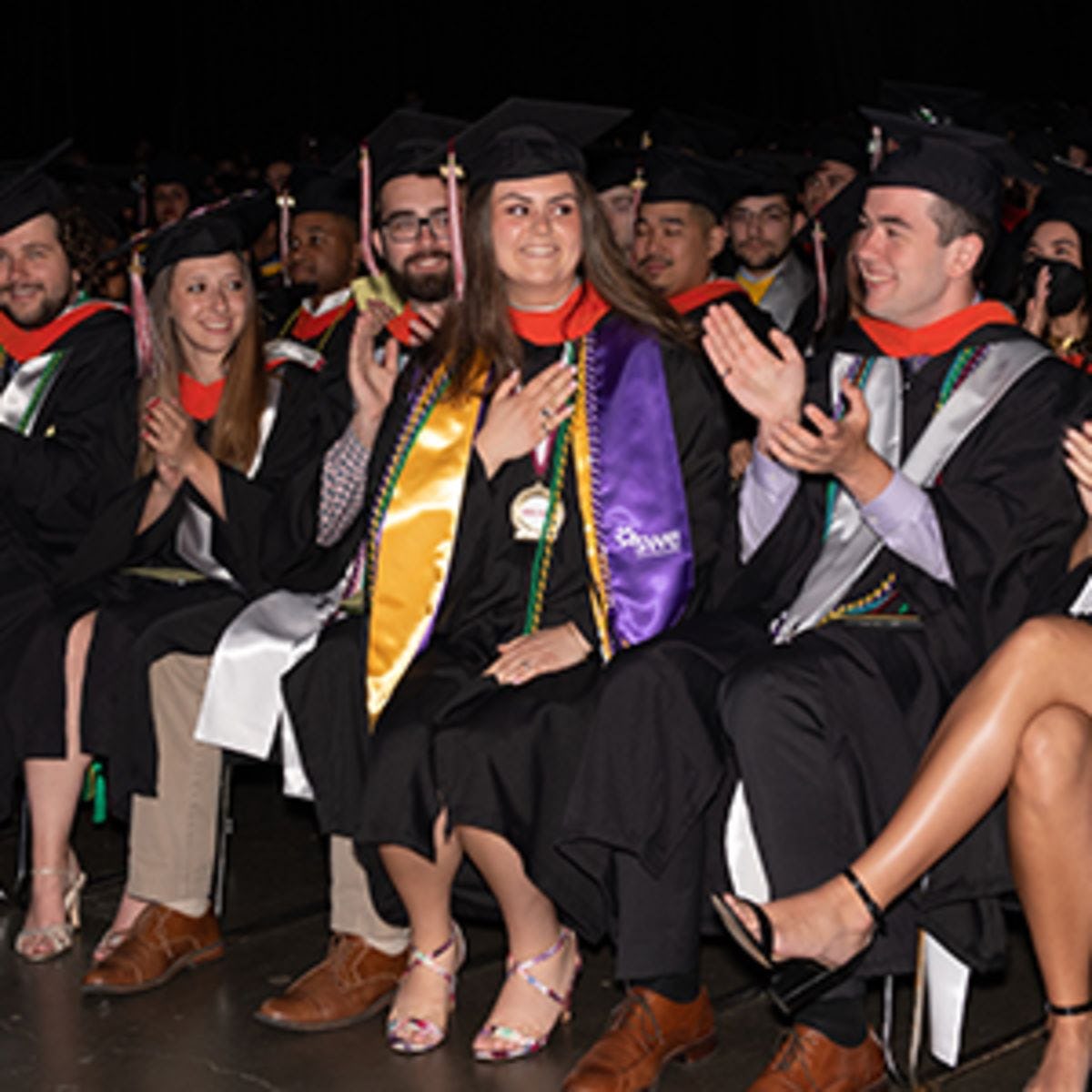 While the highlight of the Tuesday’s ceremonies was the conferral of degrees, several other recognitions rounded out the celebrations. The 16 First in Class students — those who achieved the highest academic honors with a 4.0 GPA — were recognized in a video, offering best wishes and congratulations to their classmates, and President Farvardin announced that Emily Rose Kovelesky ’22 has been selected as the newest member of the Board of Trustees. Also announced were the Stevens Alumni Association Officers for the Class of 2022: Andrea Diaz-Gonzalez, president; Adrian Castellanos, vice president; Brian Taglialavore, fund captain; and Samantha Reilly, secretary. 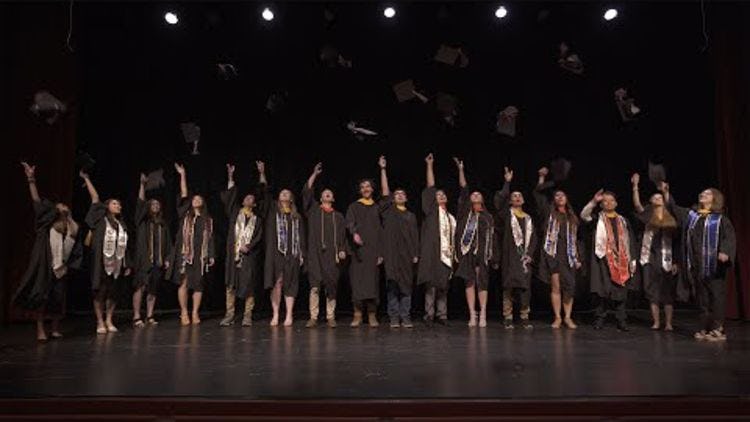 Faculty awards were given during a separate ceremony on May 23. Award winners are:

Now that graduation has marked the end of their college careers, the graduates of the Class of 2022 are ready to embark on the next phase of their journey. In between posing for photos with her diploma cover outside the Expo Center, Juliana Yeung ‘22, a mechanical engineering major who just accepted a position at L3Harris as a systems engineer, experienced a mix of emotions.

“I’m excited, but there’s some nervousness. A lot of relief,” she said. “There are so many emotions, it’s hard to describe.”

Her fellow graduate, Andrew Deutsch ‘22, a physics major who will intern this summer in quantum computing with the Brookhaven National Laboratory, agreed.

“I’m overstimulated right now,” he said shortly after the afternoon ceremony. “It’s a huge accomplishment and I feel super happy for everyone. We’ve put in a lot of hard work and we all have so much to be proud of.”