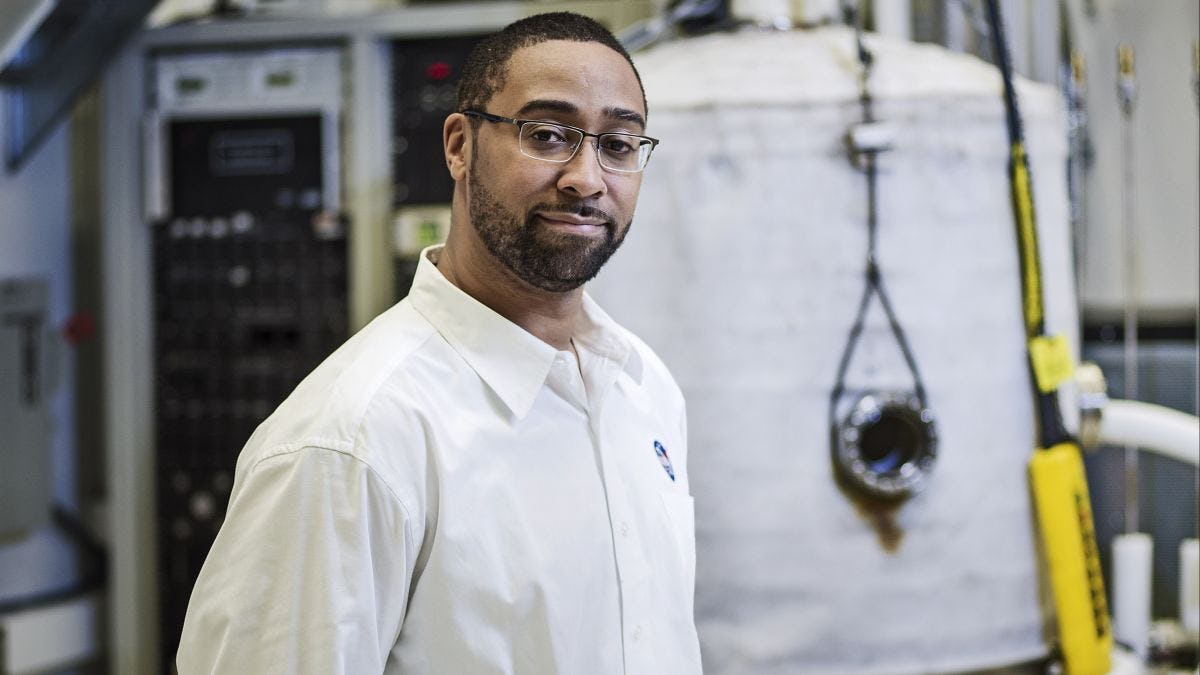 What happens when a 15-year-old high school graduate who is great at math and science finds their way to the Stevens Technical Enrichment Program (STEP) Bridge Summer Program? If you’re Carlton V. Peters ’99, you build a career as a thermal engineering expert at NASA’s Goddard Space Flight Center.

Throughout his childhood in Brooklyn and South Jersey, Carlton V. Peters ’99 was interested in engineering. But by the time he graduated from high school at the age of 15, his potential for excelling in the field was apparent.

“At 15, the idea of living on a college campus can be pretty intimidating,” Peters says with a laugh. Fortunately, the Stevens Technical Enrichment Program (STEP) Bridge Summer Program helped introduce him to university life. “The very first time I stepped onto the campus I was intrigued by the environment at Stevens.”

Finding a new friend helped, too. “I began a conversation with the student sitting next to me at orientation,” Peters recalls. “It turned out that we both had parents who had immigrated to the U.S. from Guyana, and even more surprising, they had been students together,” Peters recalls. “Who could have imagined that we would cross paths at Stevens?”

“We quickly became good friends,” he adds. “I guess things happen for a reason!”

Peters describes his years at Stevens as “wonderful,” and credits his alma mater with preparing him for a very successful career at NASA. He has been with the agency for more than 20 years and is currently Branch Head for the Thermal Engineering Branch of the NASA Goddard Space Flight Center.

“I supervise about 40 civil servants and another 40 or so contractors at Goddard,” he says. “I have a big-picture view of people coming into the workforce and learning on the job. Your schooling teaches you how to think. I realize now how much Stevens gave me in terms of being able to problem solve. Flexible thinking is extremely helpful in my work.”

That work has included projects such as the Lunar Orbiter Laser Altimeter (LOLA), which is helping to create a topographic model and geodetic grid of the moon. The Global Precipitation Measurement Core Observatory (GPM), the largest spacecraft ever built at Goddard, observes weather events from space. The GPM, launched in 2014, improves weather forecasting and tracking of extreme weather events, helps scientists monitor freshwater resources, and supports crop forecasting.

In October the OSIRIS-REx spacecraft, another project that has benefitted from Peters’ expertise, successfully stowed its Sample Return Capsule with a sample of the asteroid Bennu. “It is exciting,” Peters says, noting that these missions are many years in the making. “OSIRIS-Rex launched four years ago, and it will be another two years before it returns with the sample. But when it does, we will learn so much about the history of the asteroid, including whether signs of life exist there.”

You might say that the sky is the limit for Peters, a Stevens graduate whose work is crucial to space exploration. But this engineer is just as interested in encouraging the next generation of STEM professionals – especially those pursuing their degrees at his alma mater. “Be patient and take advantage of all of the opportunities that will come to you while you’re a student,” he counsels. “There will be so many – classes, relationships, activities. Don’t limit yourself. There is so much that you can learn during your time at Stevens.”