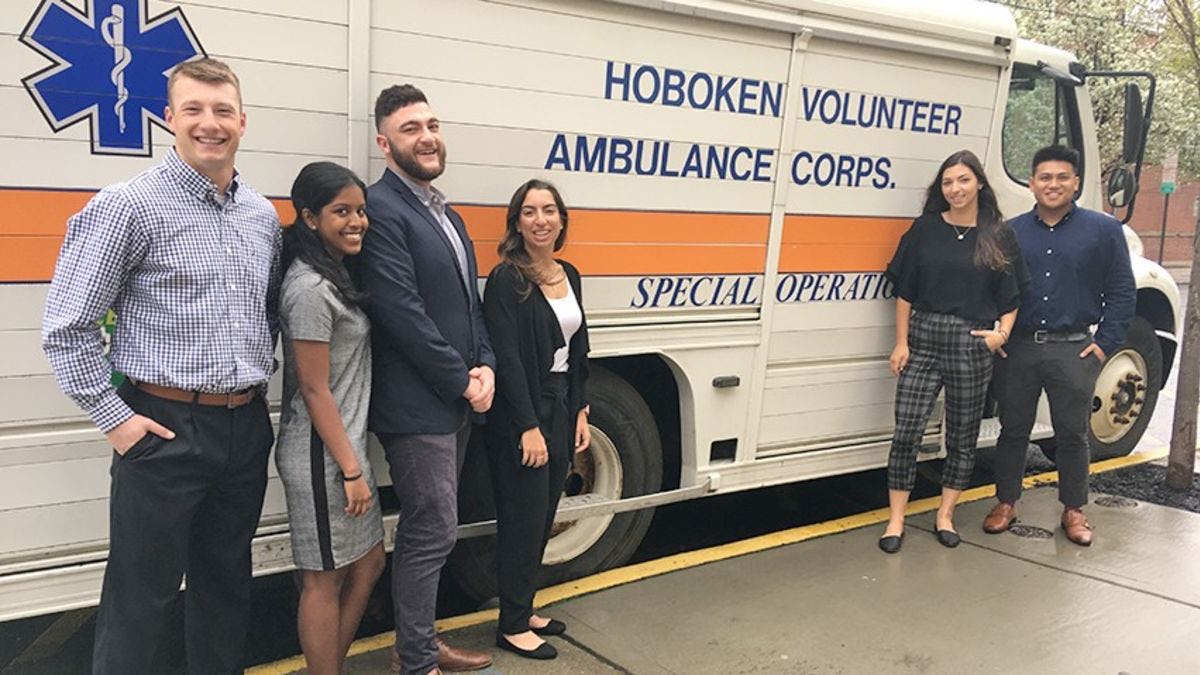 Hoboken is a challenging place to be an EMT.

These kinds of challenges are no problem for the professionals of Hoboken’s Volunteer Ambulance Corps. But one they haven’t yet managed to solve is better awareness and visibility from the community.

Fortunately, a team of business students from Stevens Institute of Technology is eager to lend the city’s rescuers a hand.

As part of their Senior Design project for the May 3 Innovation Expo, the students — all studying Business & Technology at the School of Business — developed a strategy to help HVAC raise awareness of the work it does in Hoboken. Their goal is to spur a successful fundraising campaign so the volunteers can purchase a new ambulance, as well as replacement stretchers and autopulse machines that perform CPR on patients en route to hospitals.

Early adjustments to the plan

The biggest challenge the team faced was getting started, when their ideas didn’t align with HVAC’s thinking.

“At first, we thought we’d do a happy hour or gala to bring in the community,” said Natasha Rai ’19. “But we presented that idea in the first meeting and they were not interested.”

They had some pretty big ambitions, which we had to scale in relation to the timeline we were working with, and hopefully lay the groundwork so they can meet their goals two or three years down the line.
Sam Sherman '19

Instead of one-off events — which are expensive and time-consuming to produce — HVAC wanted something sustainable. What exactly that looked like involved some quick decision-making and rapid pivoting by the students.

“When we first got the project, it was somewhat vague,” said Sam Sherman ’19. “They had some pretty big ambitions, which we had to scale in relation to the timeline we were working with, and hopefully lay the groundwork so they can meet their goals two or three years down the line.”

The team’s recommendations include a cashbox donation system, improved social media presence, and closer connections between HVAC and Stevens — which is home to pre-med academic programs and clubs, yet in a survey, “less than 10 percent of the pre-med community at Stevens knew it was donation based,” Rai said. “And this is their target recruitment community.”

The cashbox project will involve donation boxes Hoboken businesses, where customers can either contribute cash or scan a QR code that will take them to a Paypal page where they can donate. A one-month trial of the program is taking place this spring.

The team doesn’t expect donation boxes to pay the $150,000 cost of a new ambulance, “but we’re really aiming at raising awareness in the community, among local Hoboken businesses and their customers,” said Rai, who’s joining EY’s technology advisory program after graduation.

One thing Julia DeCandia ’19 said she likes about working with the EMTs is that they know what they don’t know.

“They’re very aware of their problem areas,” said DeCandia, who will be working at Scholastic after she finishes her degree. “It comes down to manpower and time, because all the people who volunteer with them also have full-time jobs, So they work 9 to 5, then go to volunteer. They’re saving lives, they don’t have time for things like social media.”

In fact, the team was excited about a possible storytelling campaign on social media, but Katherine Tirabassi ’19 said the ambulance corps just brought in the team from the Hoboken Girl blog to start doing that work, so they set aside that plan.

“We did some interviews with Hoboken EMTs about their experiences, describing the challenges that are unique to Hoboken and the work they do, and I think we found some really heartwarming stories,” said Tirabassi, who is also off to EY after commencement. “But it could certainly be something they pursue more closely with Hoboken Girl.”

The members of the team, which also includes Alex Morte ’19, have been friends throughout their Stevens experience and have collaborated on projects since they were freshmen, which helped them power through the obstacles they faced.

“We’re trying to do a lot for them in a very limited amount of time,” said Donny Gherardi ’19, who will be a full-time MBA student in the fall. “Stevens has taught us how to work on a time crunch. We do a lot of project and presentation work, we play sports, we’re in sororities and fraternities and other clubs, but we know how to pull things together in a short time.”

Like any awareness campaign, the students are not going to solve HVAC’s problems in nine months, but they hope this is the start of a good relationship between the EMTs and Stevens, one that evolves to include volunteer or work-study opportunities.

“A lot of us know people involved with HVAC, as volunteers or through clubs, and thought it would be a great way to give something back to the Hoboken community,” Sherman said.