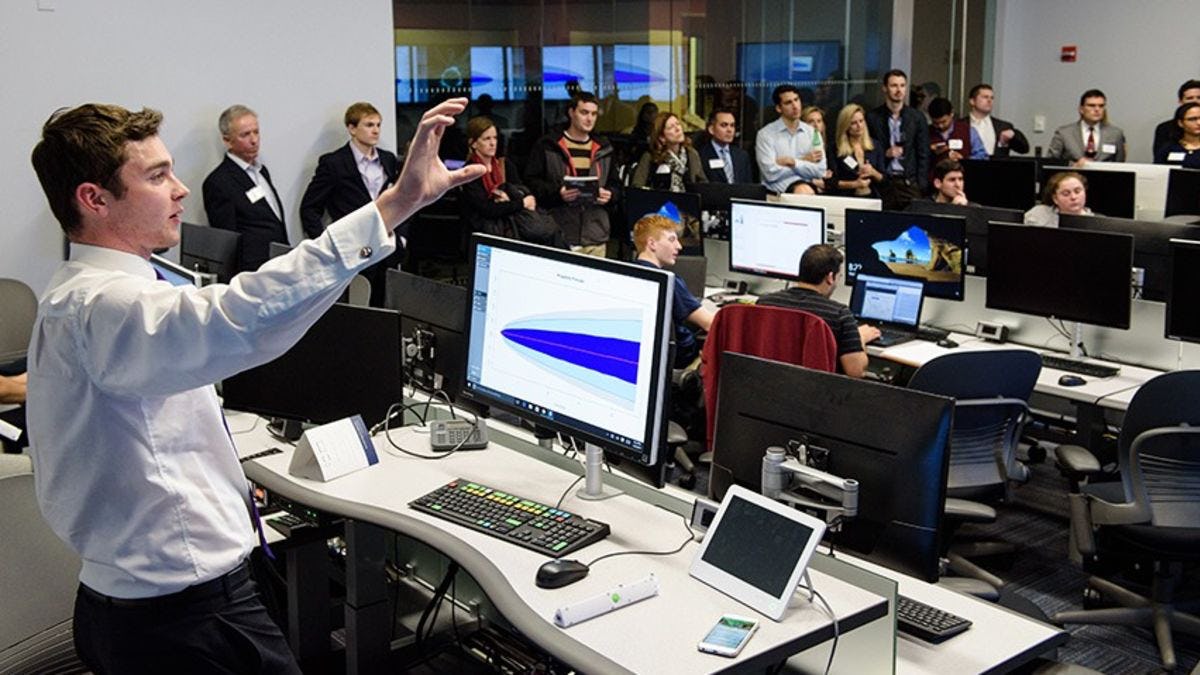 Stevens alumni on Wall Street crowd the new Hanlon Lab for Analytics and Data Visualization to watch a business student present a project during a Stevens on the Street event.

For Professionals on Wall Street, Hanlon 2 Offers Glimpse into Data- and Analytics-Driven Future of Finance

A decade ago, finance was a blip on the radar at Stevens. Today, it accounts for nearly 10 percent of the university’s footprint — the result of smart strategic planning by Stevens and its School of Business, and a necessity as professionals continue to grapple with the speed at which technology is disrupting the industry.

That growth was on display during a recent Stevens on the Street event, where nearly 80 Stevens alumni working in finance on Wall Street returned to campus to see a demonstration of the new Hanlon Lab for Analytics and Data Visualization, located within the Hanlon Financial Systems Center. 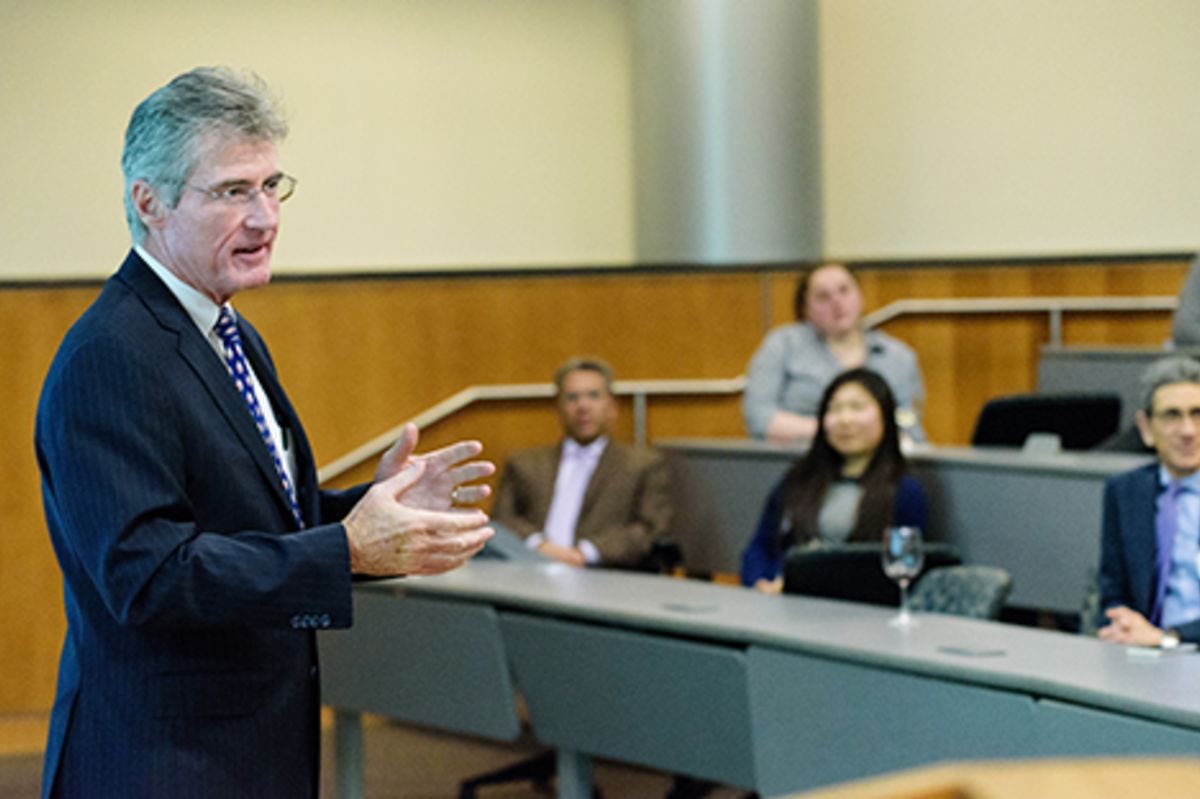 Sean Hanlon '80 spoke of 'this pride, this honor' of being a member of the Stevens community during his remarks at the Stevens on the Street event.

The demonstration of the lab, called Hanlon 2 for short, allowed alumni who see these challenges daily to better understand how Stevens is preparing students for a future that will belong to those able to quickly and confidently make decisions based on an understanding of data.

“In 20 years, finance has gone from a people-oriented business to a high-tech business,” said Dr. George Calhoun, director of the Hanlon Financial Systems Center and of the undergraduate Quantitative Finance program. “The engineering mindset at Stevens is valuable to the financial industry — that’s why they come here and recruit here.”

The Hanlon Lab for Analytics and Data Visualization gives students access to real-time Bloomberg data and powerful tools, such as R, SAS and Hadoop, that allow students to analyze and visualize historical and live data. The lab also uses Oblong technology — used on the front end of IBM’s Watson platform — to enable presenters to simultaneously collaborate, whether across campus or across the world. The extensive deployment of Oblong in the lab is unique in higher education.

The strategic direction of the lab, and of finance at Stevens, is owed largely to the generosity of Stevens trustee Sean Hanlon ’80 and his wife, Cathy, whose gifts made the two Hanlon labs, and the Hanlon Financial Systems Center, possible.

Sean Hanlon, Dr. Calhoun said, “crystallized the vision for us — that this was a direction Stevens needed to invest in.”

At the event, Sean Hanlon was introduced by Stevens President Nariman Farvardin, who thanked the Hanlons for their generosity in creating a center that energizes all of the Stevens activities related to finance, financial engineering and quantitative finance.

“These two labs have become a center of intellectual and scholarly activity that brings all of these forces in finance in one place, creating a very unusual opportunity for Stevens,” Dr. Farvardin said. “Sean and Cathy Hanlon have played a leadership role in not only creating these two laboratories, not only creating the Hanlon Financial Systems Center, but for generously and selflessly sharing with us their time, talent and experience.”

To his fellow Stevens alumni, Sean Hanlon said “we are attached at the brain forever, to a great institute with great leadership.” He also encouraged alumni to contribute to the university’s ongoing capital campaign.

“I’ve been fortunate enough that, through some financial success, I’ve been able to help the university, and it’s truly unbelievable — this feeling, this pride, this honor to be welcomed here and to be a member of this Stevens community,” he said.

The event’s keynote speaker, John Schwall ’95 B.E. Engineering Management and ’98 M.S. Technology Management, said it was “no surprise” that Stevens is among has a prized reputation among recruiters, given the continued advances of technology on the industry. 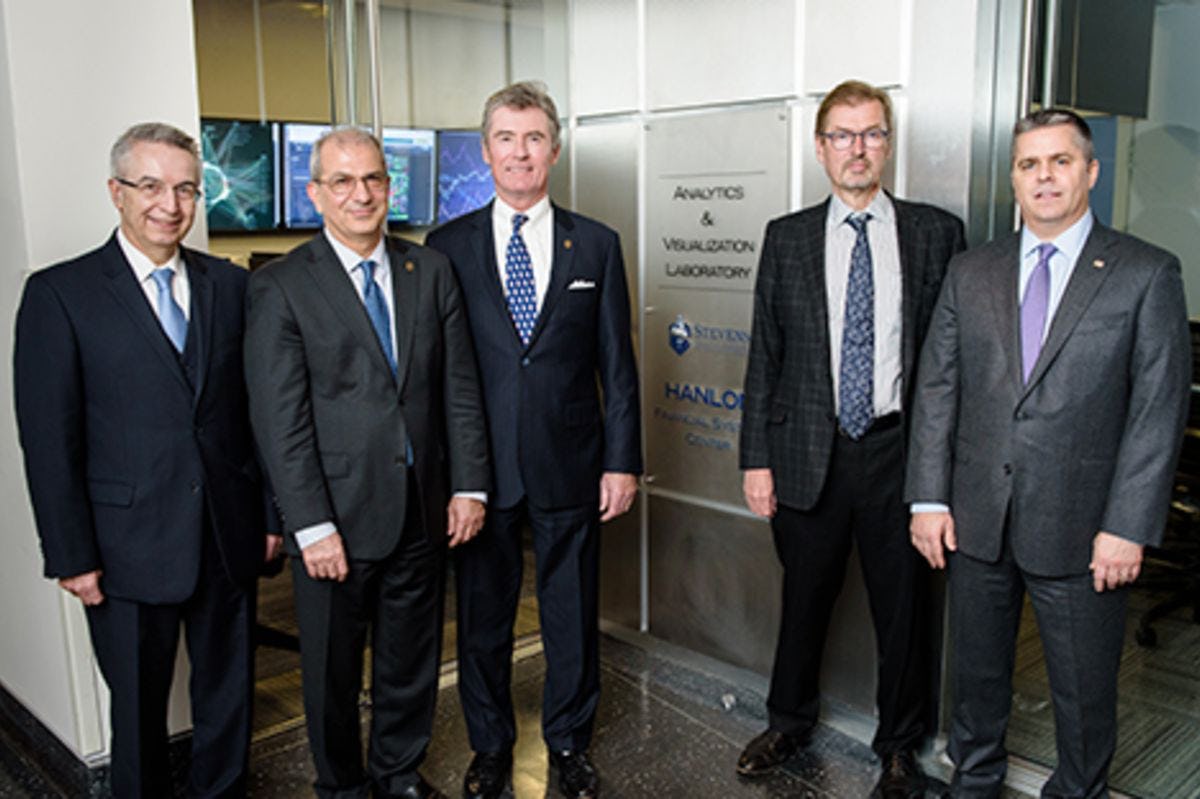 Schwall is a co-founder and chief operating officer of IEX, which was founded with the aim of offering fairness in trading through a “speed bump” that eliminates the advantages some institutions have been able to exploit. His story, and that of IEX, are documented in the Michael Lewis book “Flash Boys.”

“There is this element of social justice and reform that people are looking for, and in many ways, I think Wall Street is going to be a part of that, because people are crying out against the corruption and the injustices that we all see on a daily basis,” he said.

He also discussed his “unthinkable” rise to his high-profile role at IEX.

“I credit Stevens in a major way for providing me with the foundational educational background to operate in my capacity at IEX,” he said.