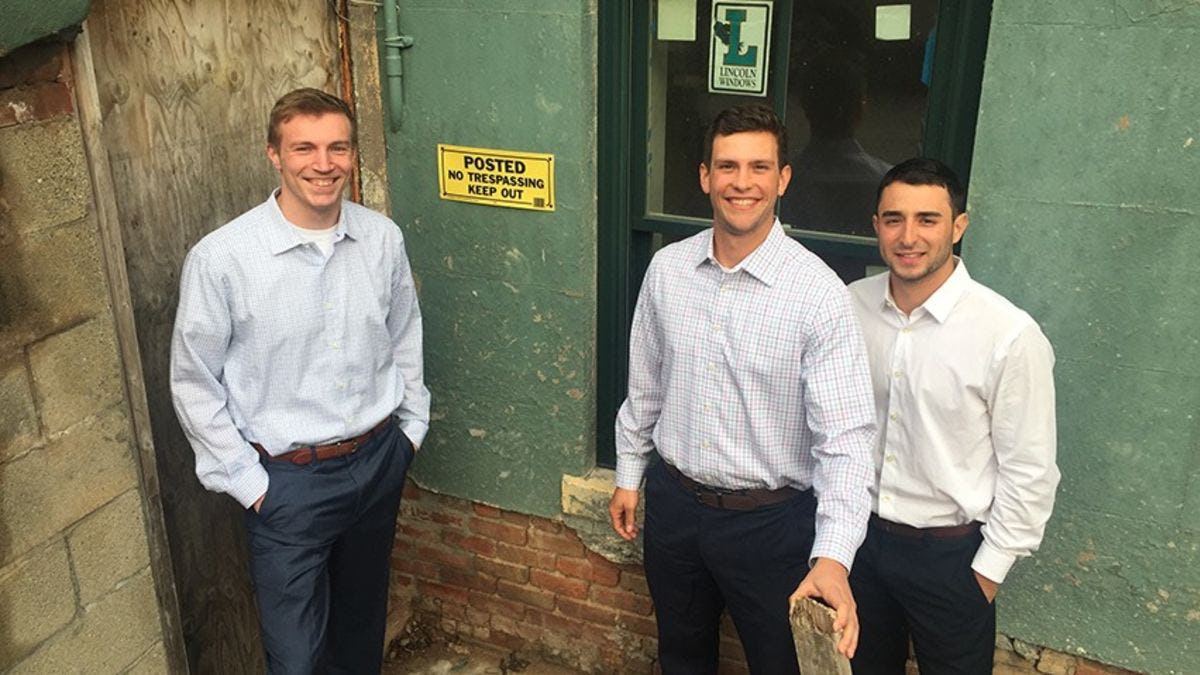 From left, Bill Bonifacic, Garrett Wells and Michael Mulé outside a foreclosed property in Hoboken. The team, along with Thomas Marchese, built the FlipTrack platform to automate foreclosure tracking for real estate investors.

Even if you’ve never seen the show, you’re probably familiar with “Property Brothers,” the HGTV series about a real estate agent and a contractor who help couples purchase fixer-uppers and transform them into dream homes, all without mussing their perfectly coiffed hair.

On the show, the biggest surprise the buyers find might be how hard it is to rip out a set of cabinets during kitchen remodeling. But ask investors who specialize in flipping properties, and you’ll get a real list of horrors, like buried oil tanks, rooms full of trash and unstable roofs.

Now, a team of seniors at the School of Business at Stevens Institute of Technology is confident it’s hit on a way to make it easier for flippers to do their business. The team developed an algorithm, FlipTrack, that scans websites where sheriff’s sales are posted to create a customizable, searchable database of the thousands of homes moving through the foreclosure process.

Bringing flipping to the 21st century

For the team, the biggest surprise was that no one has done this before. Or, as senior Bill Bonifacic said, “It’s like someone forgot to bring the foreclosure real estate market into the 21st century.”

The idea for a tracking service came to Garrett Wells as he was helping a family friend, David White, during the summer. White’s retirement career is in flipping houses; Wells started watching him to learn about the business.

As Stevens students, we're so engaged in data visualization and technology that we have a real advantage in doing things faster and more efficiently.
Garrett Wells '17

“The more I watched him, the deeper I got into the details, the more I realized how much time he was spending on tedious work that could be automated,” Wells said. Each day, White spent four hours hunting through foreclosure listings on county sheriff’s websites — which are not regularly updated and look, to the uninitiated, like data dumps — for properties that might suit his needs, before going into the field and trying to ascertain if a home was a good fit for his business.

Wells and Bonifacic, along with fellow Stevens seniors Michael Mulé and Thomas Marchese, created an algorithm that automatically gathers and organizes the relevant data into an Excel sheet for White, who isn’t confident building such technology-driven solutions himself.

The Stevens team, of course, had no such hangups, thanks to a curriculum that emphasizes business applications of technology, data, analytics and innovation.

“As Stevens students, we’re so engaged in data visualization and technology that we have a real advantage in doing things faster and more efficiently,” Wells said.

Mulé agreed. “Especially being business majors, we’ve been taught to think of new ideas when we look at how companies do business,” he added.

Foreclosure listings can be fluid — if back rent is paid, for instance, a property could come off the list, only to be set for auction again months down the road — so just to manually track properties is a full-time job. The Excel-driven solution, Mulé said, “keeps it simple while making it easier for the client to track the houses he wants, and give him a better chance of getting them.”

Many small investors in this industry are reluctant to embrace technology-driven solutions, but the team led with the data, which won White over. Mulé credited Stevens Professor George Calhoun with “making us smarter on the data and numbers side, and preparing so that we know what data points will resonate strongest with a client.”

“When you show them the numbers, and you can tell them — we’re going to increase your speed by 20 percent, we’ll cut the time it takes you to flip a house from a month to a week — it really engages them, and that’s something we learned in Dr. Calhoun’s classes,” Wells added. 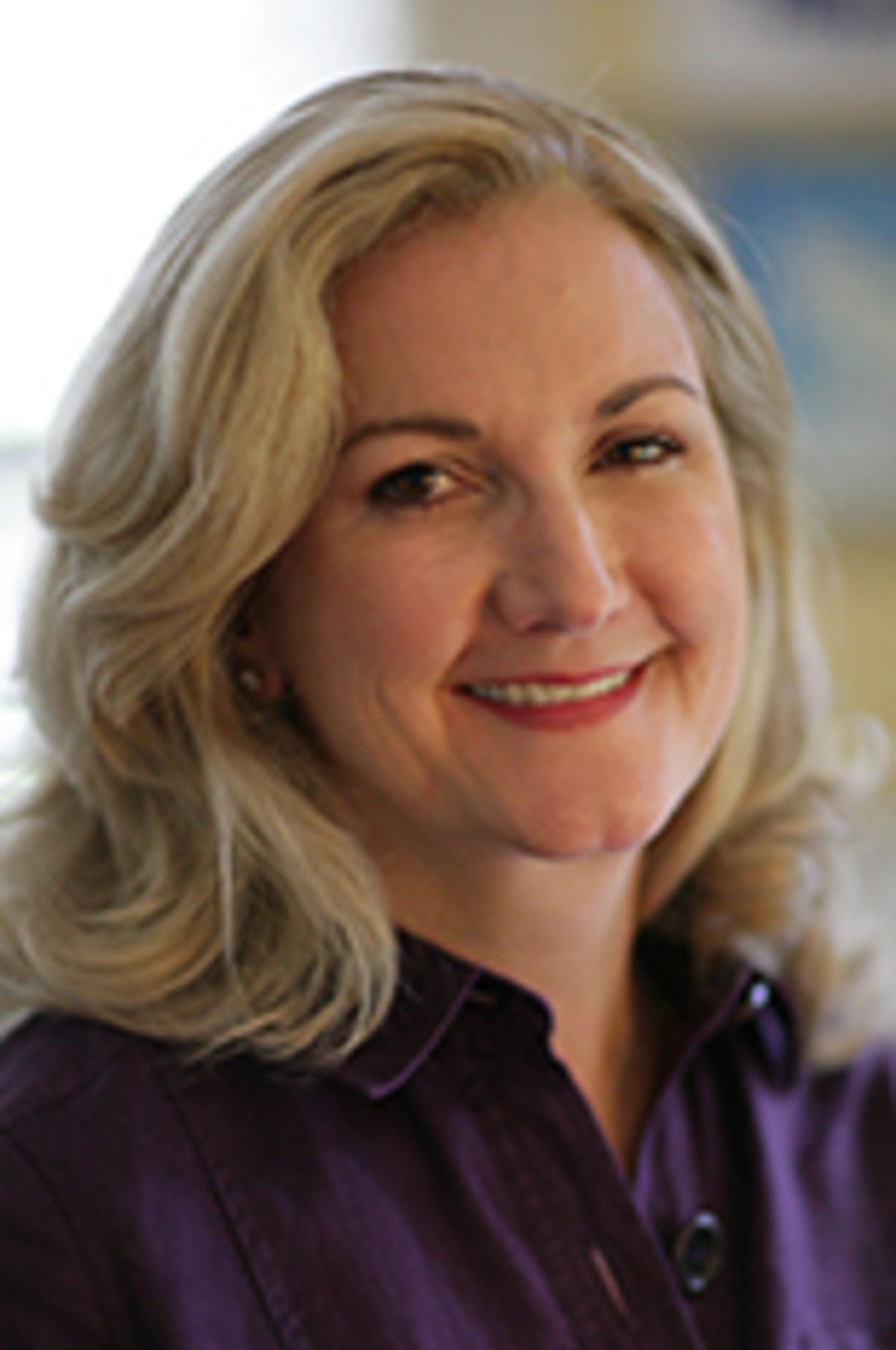 Dr. CV Harquail 'pushed us to grow our project' in a sensible direction, said Garrett Wells.

The project’s advisor, Professor CV Harquail, encouraged them to attend sheriff’s sales as they thought about a market for the service. “That was when we realized everyone is having this problem that should have been fixed years ago,” Wells said. “She pushed us to grow our project in a direction that really makes sense.”

Technology-based services do exist, according to the team’s research, but they charge around $100 a month, offer very limited functionality and are complex — some come with user manuals — to an audience that isn’t tech savvy. As the focus of the project turns from coding to marketing, the team said it could charge a monthly fee as low as $20. Marchese, who is pursuing a future in marketing, designed a logo and branding standards for the service.

“Stevens marketing classes have definitely helped my thought process and visibility to know the steps to a successful project,” Marchese said. “FlipTrack has definitely made me use the processes and programs I’ve been taught to visualize the data. I think our team has all the pieces to make it successful.”

To that end, while the students are still weighing offers and interviewing for positions, the consensus is that FlipTrack could make a great side project, if not necessarily a career.

“We see this as having a real ability to level the playing field for small-time investors, who don’t have the same resources as institutional ones,” Wells said. “And it more than cuts lag time for investors — it means more contractors working and hiring subcontractors, more spending on materials — in short, more people working and less people waiting.”