Building Better Global Healthcare, for the Lone Star State and Beyond 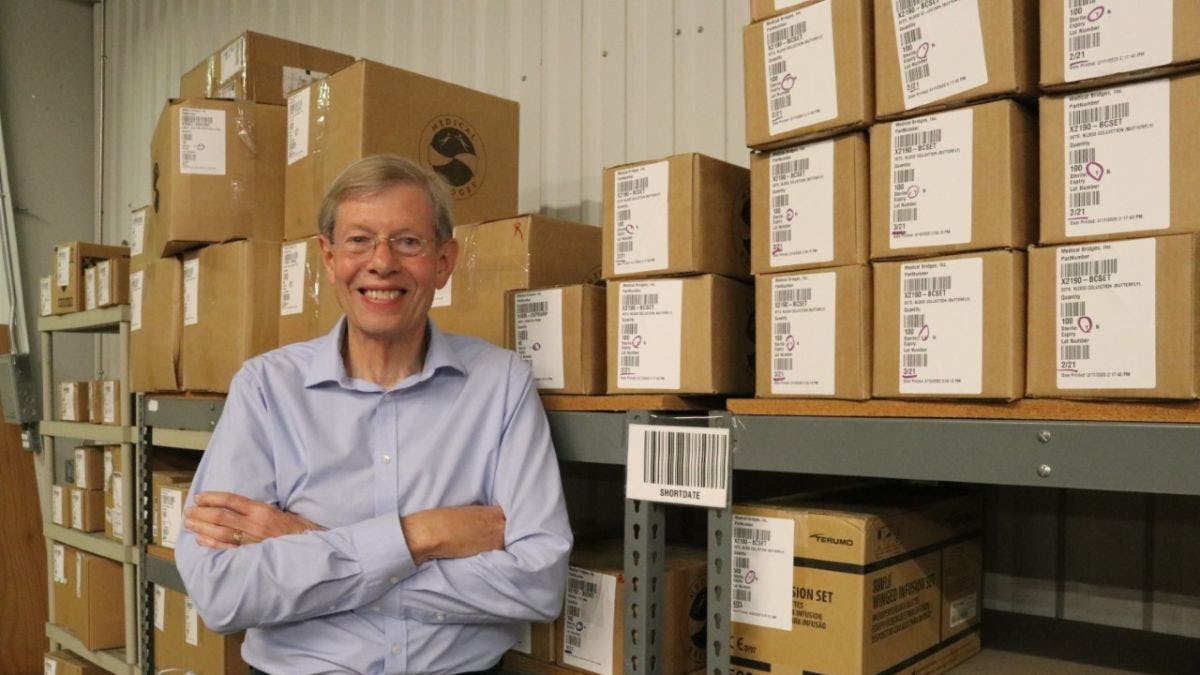 Walter Ulrich '68, president and CEO of Medical Bridges, Inc., inside the nonprofit's warehouse in Houston.

COVID-19 cases are spiking across Texas this early July day when Walter Ulrich ’68 answers the phone from his office in Houston. Based at an essential healthcare facility, working at home was never a consideration for him.

Ulrich works not at a hospital or clinic, but out of a 30,000-square-foot warehouse in downtown Houston that is shipping PPE and other much-needed medical supplies and equipment across the globe, from Somalia to New York City, from Pakistan to tiny Hillsboro in rural Texas.

“We know we’re saving people around the world,” Ulrich says. “We need to help our neighbors who are dying, too.”

Ulrich leads Medical Bridges, Inc. in Houston, and as president and CEO, he has recently expanded the nonprofit’s mission of bridging the worldwide healthcare gap, between those in need and those who can help.

While continuing its commitment to underserved countries around the world — the group shipped 100 tons of medical supplies and equipment to 14 countries in 2019 — Medical Bridges is also aiding poor rural communities across the Lone Star State that lack equipment, not only to combat the coronavirus, but also to safely treat patients during routine medical procedures. Indeed, Ulrich sees his group helping rural healthcare in Texas survive and thrive.

The pandemic has certainly meant many long days for Ulrich, who took the reins of the 20-year-old organization in 2019.

This past spring, Medical Bridges shipped 40,000 masks to some 70 locations across 33 counties in Texas, from clinics to hospitals to assisted-living facilities. Masks — by far the most requested item until recently (now it’s gowns and other PPE) — have also been shipped to New York City, to the Navajo Nation in Arizona and to China, when that country was first combatting the pandemic. The nonprofit also supplied the Houston YMCA with donations of alcohol wipes and thermometers. 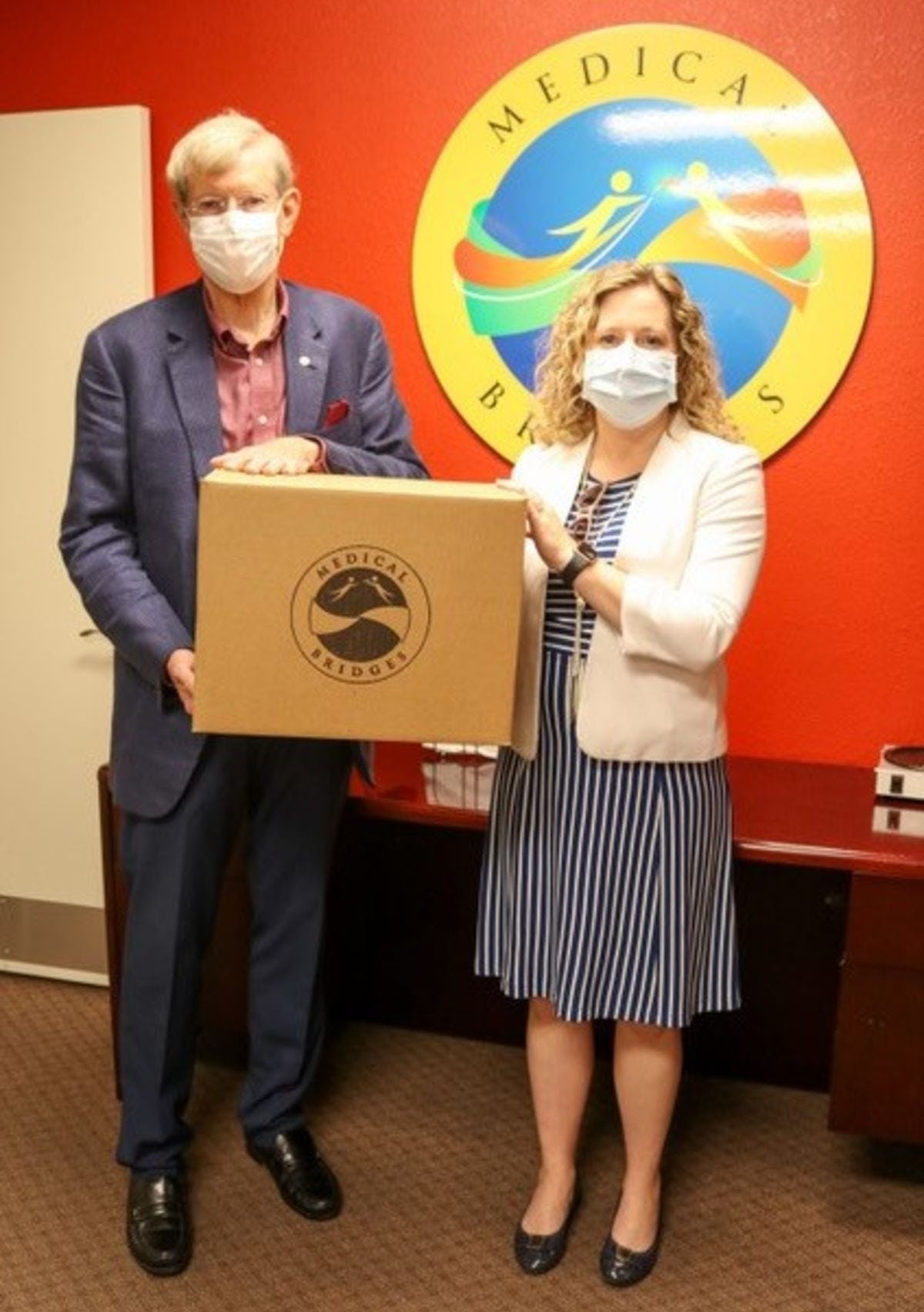 Walter Ulrich ’68 presents a donation of masks to Diane Santa Maria, dean of the Jane and Robert Cizik School of Nursing at the University of Texas Health Science Center at Houston, at Medical Bridges’ offices in May.

Medical Bridges’ medical supplies and equipment — along with financial support — come from the mammoth Texas Medical Center, one of the largest medical systems in the world; Texas A&M University; corporate and individual donors in the Houston area and beyond; and the Bush China Foundation.

It ships a staggeringly vast variety of unused and gently used materials, from surgical instruments and cardiac monitors to incubators, ventilators and operating tables.

Ulrich sounds hopeful that the pandemic will ultimately be controlled in the U.S., though he expects it to take two to three years before it’s controlled in developing countries. He and his staff of 15 employees and a host of volunteers are trying to prepare.

“These countries will need masks and ventilators,” he says. “We expect a glut of ventilators and are preparing to ship them around the world.”

“We could ship ventilators every single day and not meet the need.”

When Ulrich came out of semi-retirement to join Medical Bridges — after a long and successful career as an entrepreneur and business executive in the tech, finance, healthcare and energy sectors — he saw a need to form closer ties with rural communities and hospitals in Texas, while maintaining the organization’s global mission.

He speaks passionately of the plight of rural medicine.

Over the past decade, 120 rural hospitals have closed across the U.S. — 20 of them in Texas, he says. When rural hospitals and local clinics close, the death rate climbs, he observes, as patients have farther to travel — often many miles — for time-sensitive medical emergencies like heart attacks and strokes. Faced with the expense and inconvenience of long travel, rural patients may also put off wellness visits and care, with a lack of health insurance compounding the problem. In rural Texas, 540,000 people live in poverty, he says — so he is driven to help those rural medical facilities that often serve people in need.

As passionate as he is about the needs of rural Texas, Ulrich also speaks with much emotion about Medical Bridges’ global mission.

So far in 2020, Medical Bridges has sent supplies to countries all over the world, including Kenya, Jordan, Mexico, Nepal and Togo. Throughout its history, the group has shipped to more than 86 countries on five continents.

As he sees health inequities across the U.S., Ulrich sees inequality and poverty at even greater heights around the globe.

Gambia, for example, doesn’t have a single dialysis machine in the entire country, so people with money go to neighboring countries for treatment, he says. People who can’t afford the treatment or the travel die.

“These people are dying needlessly, for things we take for granted,” he says.

Ulrich has a quiet determination and sense of compassion that, even over the phone, are immediately striking.

He speaks of three things that made all the difference in his life: his parents (his father, a World War II Army captain who served as executive officer of the 106th Evacuation Hospital; his mother, a decorated World War II surgical nurse at that same mobile hospital); his service in the Marine Corps; and Stevens.

Ulrich praises his well-rounded education for helping him to think broadly, to deal with astounding, numerous changes in technology and to adapt his skills over a long career.

“I don’t believe that any other college in the world could have helped me as much as Stevens did,” he says.

Before his semi-retirement, Ulrich served as president and CEO of the Houston Technology Center, a nationally recognized business accelerator. When he got the offer to run Medical Bridges, he didn’t hesitate to dive back into work full time     .

“A 50-year career — should I waste it and sit by a pool when this organization saves lives?” he asks.

His goals for Medical Bridges are ambitious. As of August 6, the organization has shipped 78 tons of  medical supplies around the world; he wants to increase this to 250 tons annually in the next four years. He envisions the organization serving other communities within its region, states like Louisiana, Arkansas and Mississippi.

“We’re good at what we do,” he says of Medical Bridges. “We have an obligation to do more of it.”

He recalls that Medical Bridges’ founder, Dr. Patricia Brock Howard, started the organization after a visit to El Salvador, where she watched doctors using bread bags as gloves. She started shipping them gloves, one box at a time.

He pledges to continue building these lifelines around the world and in the U.S. too, one shipment at a time.

“I love coming to work every day. I love the challenges, I love the people,”  he reflects.

From the office to the warehouse, “people have great heart. I walk to the loading dock, I get such a sense of satisfaction. These things are going to save lives.”