A Brighter Future for Carbon Nanotubes 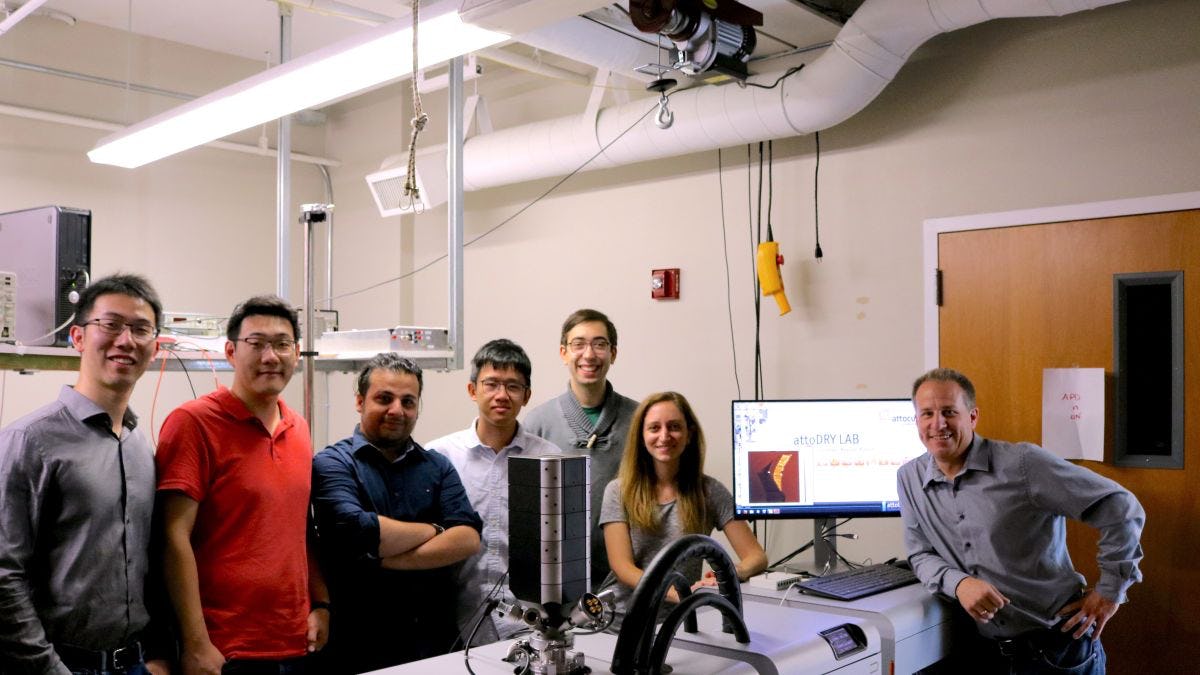 Stefan Strauf and his students in the NanoPhotonics Lab

Carbon nanotubes may only be one nanometer thick, but they’re stiffer than steel and stronger than diamond. They’re also good conductors, and since their discovery in the 1990s researchers have been applying them in many fields including nanoscale electronics, lightbulb filaments, chemical processing and solar energy harvesting. Unfortunately, as a nanoscale light source they’re not very bright.

That’s what Stefan Strauf and his team is trying to fix.

Strauf, an NSF CAREER awardee and associate professor in Stevens Institute of Technology's Department of Physics, conducts his research in the NanoPhotonics Lab. The lab focuses on using semiconductor nanomaterials to create optical devices with greater efficiency. Nanomaterials are "ideal testbeds for fundamental aspects of light-matter interaction" because they have unique optical properties at the nanoscale," Strauf explains.

Writing in prestigious journal Nature Communications 8, 1413 (2017), Strauf and his students as well as team members from the National Renewable Energy Lab and Columbia University outline how they were able to increase optical quantum efficiency from two percent to a record high 62 percent using a gold nanoantenna.

Overcoming Problems at the Nanoscale

A typical problem of nanoscale materials is that they can be negatively affected by interactions with the environment, such as the substrate they reside on or the material they are embedded in. To overcome that, the researchers used a trick: they wrapped the carbon nanotube with a polymer that wiggles helically around the nanotube, very much like DNA. The result is a protective coating that prevents negative environment effects. "Without that co-polymer technology of the NREL team, the optical quantum efficiency of the carbon nanotubes can be zero," explains Strauf.

There are also internal issues with carbon nanotubes because they are governed by the laws of quantum physics, meaning their structures can behave differently—or change entirely—due to molecular instability at the quantum level.

"Our main trick was to couple the optical emission of the carbon nanotube to a gold nanoantenna that works as a plasmonic resonator," explains Strauf’s Ph.D. student Yue Luo. He explains further, stating:

In this way, we enhance the rate of optical emission by the Purcell effect, and get the photons out quicker before the electrons can recombine in a nonradiative form. This drastically enhances the quantum yield up to 62 percent. While other researchers have shown similar effects for dye molecules, we are the first to demonstrate this for an individual carbon nanotube.

How the Gold Nanoantenna Works

In order to get that dramatic result, Strauf and his students created large arrays of bowtie-shaped gold antennas on a chip that featured a small air-gap of only ten nanometers. They looked like this: 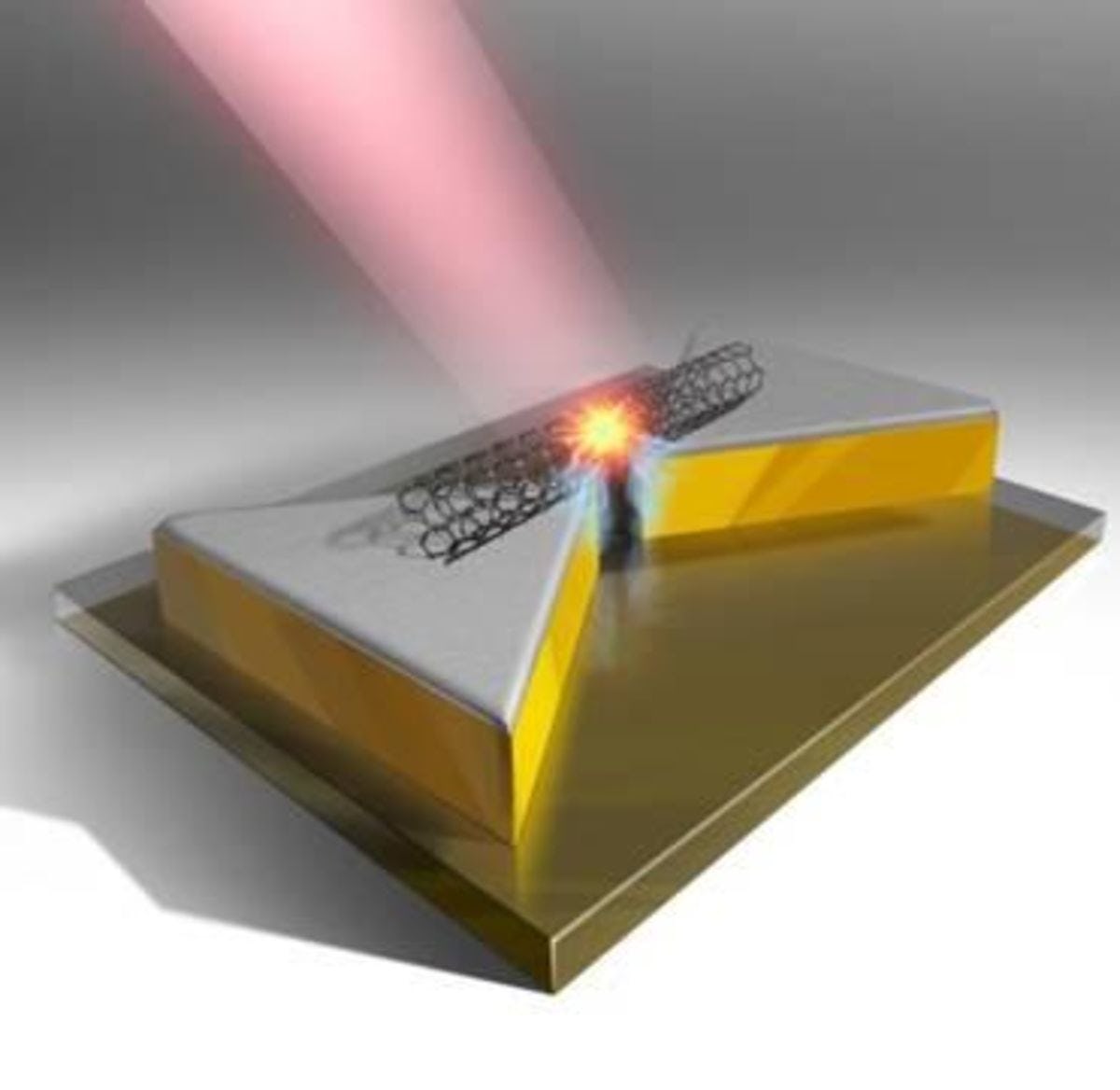 Schematic of an individual carbon nanotube suspended across a gold bowtie nanoantenna. NOTE: the nanotube is larger in size in this diagram than in real-life for visual clarity.

When a laser is shined into the antenna, almost all of its light energy is trapped in the ten nanometer gap—the black space beneath the orange spot of light in the image above. If a carbon nanotube is anywhere near that region, its optical emission rate is enhanced up to 180 times. In this case, the researchers reported a light emission rate of 15 million photons per second from just one carbon nanotube coupled to the gold bowtie antenna.

Making such tiny gold nanostructures to act as plasmonic nanoantennas is only possible with sophisticated electron-beam lithography. This technique allows a 30 nanometer gold film the width of a pencil line to be whittled down to only one nanometer.

In addition to these applications, Strauf and his team are investigating carbon nanotubes "not for your regular light source or solar cell application," he explains. "We investigate these structures to realize quantum light sources that find applications in on-chip quantum information processing and cryptography."

Quantum cryptography is a burgeoning area of research at Stevens carried out by several teams in the newly formed Center for Quantum Science and Engineering. Center director Yuping Huang is grateful for these contributions, saying, “The NanoPhotonics Lab’s recent development in single photon sources is not only fundamentally interesting, but also practically important for innovative quantum information applications that are actively pursued in Stevens Center for Quantum Science and Engineering.”

Using carbon nanotubes in this way holds great promise for secure fiber optical communication. That’s because they use the laws of single or entangled photons rather than mathematical algorithms to encrypt information, making it quantum secure. The key to achieving that security is controlling the light emission itself down to the level of individual photons.

"In a classical light source, like Edison’s light bulb, nothing is controlled," Strauf explains. "You pump energy into it, and most of that energy is lost as heat. The small fraction that creates light comes out in bursts and thus bunches together in a group. But when we make a quantum light source using an individual carbon nanotube, we make photons come out one-by-one, separated out in time, as required for the realization of future quantum light technologies."

Another potential application from the study is that the researchers also discovered their device works as a nanoscale thermometer. It is able to sense plasmonic heat with only a single molecule, whereas former work required large quantities of molecules to read plasmonic heat. Strauf and his team envision this could be useful for the development efforts of photothermal cancer therapy and diagnostics based on local heat created by nanoplasmonic materials.

The single molecule thermometer presented in the Nature Communications paper is, however, limited to operate at cryogenic temperatures, making it incompatible with living cells. Strauf and his students currently work on integrating other novel materials such as two-dimensional semiconductors or color centers in boron nitride into similar plasmonic nanocavities.

All of these applications are useful, and they excite the team.

"I think the nanoplasmonics platform is very useful, for everything," says Luo. "That’s why I like it."