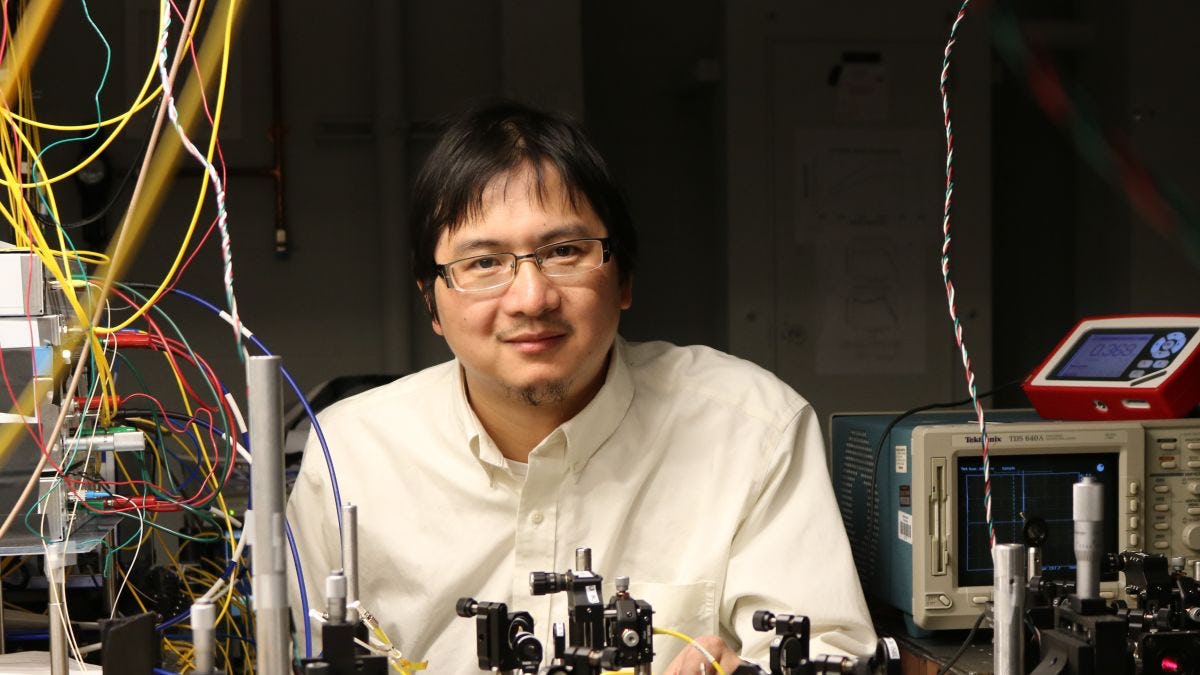 As a boy growing up in a tiny farming village in southern China, Stevens physics professor Yuping Huang always knew he wouldn't work on the family farm alongside his parents and brother raising rice, vegetables and ducks.

"I was physically small, back then," he chuckles now, no longer slight. "My mom told me that I'd better study really hard and do something else with my life."

He did — and soon gravitated to the one school subject where his expansive imagination found both plentiful questions and problems whose answers had not yet been fully worked out. 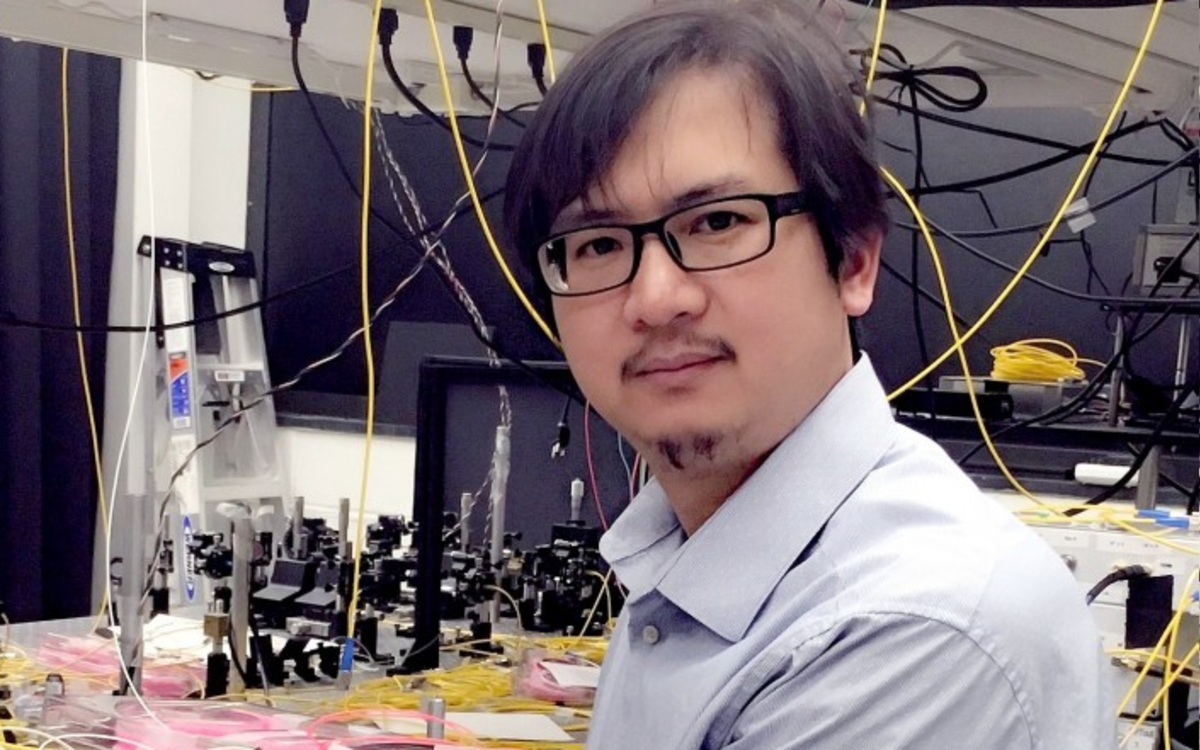 Since joining Stevens in 2014, Huang has received support for his quantum research from NSF and ONR, among others

"I was always the little kid in the back of the room who didn't want to accept what I was being taught," he explains. "I think I was actually a bit of a problem for my teachers. I always wanted to know why something was true. Even when they wrote 1 + 1 = 2, I was puzzled and asked why. I still do."

"Because I knew you cannot ever find two oranges exactly the same — we grew a lot of oranges, as well, and I tried hard to find two identical oranges — and so one plus one never exactly equals two."

And that's how he found quantum physics, a discipline whose theories actually prevent making an exact copy of anything, among its many other unusual properties.

Leveraging quantum for the greater good

After completing a science degree in China and research stints at Ohio, Michigan State and Northwestern universities in the U.S., Huang accepted a position on the faculty at Stevens in 2014. He was drawn by the location, the instrumentation, the research…and the potential to do something bigger.

"I knew the university's reputation," he recalls. "They had a legacy of engineering, access to terrific nanofabrication facilities and a real aspiration to create industrial innovation and entrepreneurship. This was where I wanted to be."

With the encouragement and support of Stevens leadership, and assistance from such physics colleagues as Ting Yu ("a tremendous mind in theoretical quantum physics, particularly the way quantum systems interact with the environment") and Stefan Strauf — "he interviewed me for the position, and we have since become very close friends and collaborators" — Huang eventually created Stevens' Center for Quantum Science and Engineering (CQSE).

Today he spends his days in the lab perfecting arrangements of lasers and light-splitting lithium niobate nanophotonic chips with his teams of graduate students. This curious setup occasionally generates and forces a pair of elusive, poorly understood energy units known as photons to shoot off the chip, divide and travel to separate destinations on campus. (Last year, Huang's team demonstrated a so-called hybrid quantum network, which may be the first of its kind in the world on a university campus.)

Once those photons arrive at their separate stations, things get very interesting. If you alter either one of the photons in any way, then measure the other photon in the pair, you find (presto!) that it has simultaneously changed in a similar way even though you haven't touched it at all.

In fact, this odd phenomenon (known as quantum entanglement) has been demonstrated— even more or less proven, to the extent we can do so — on scales both large and small. It is being used, in tests around the world, to attach information to photons: the baby steps of an exploding new field know as quantum communication, QC for short. Huang's team hunts for the engineering breakthrough that will finally bring QC to industry on a large scale.

But even as physicists work on the tricky problem of transmitting long-distance, super-secure communications, Huang is already thinking ahead to the next steps. 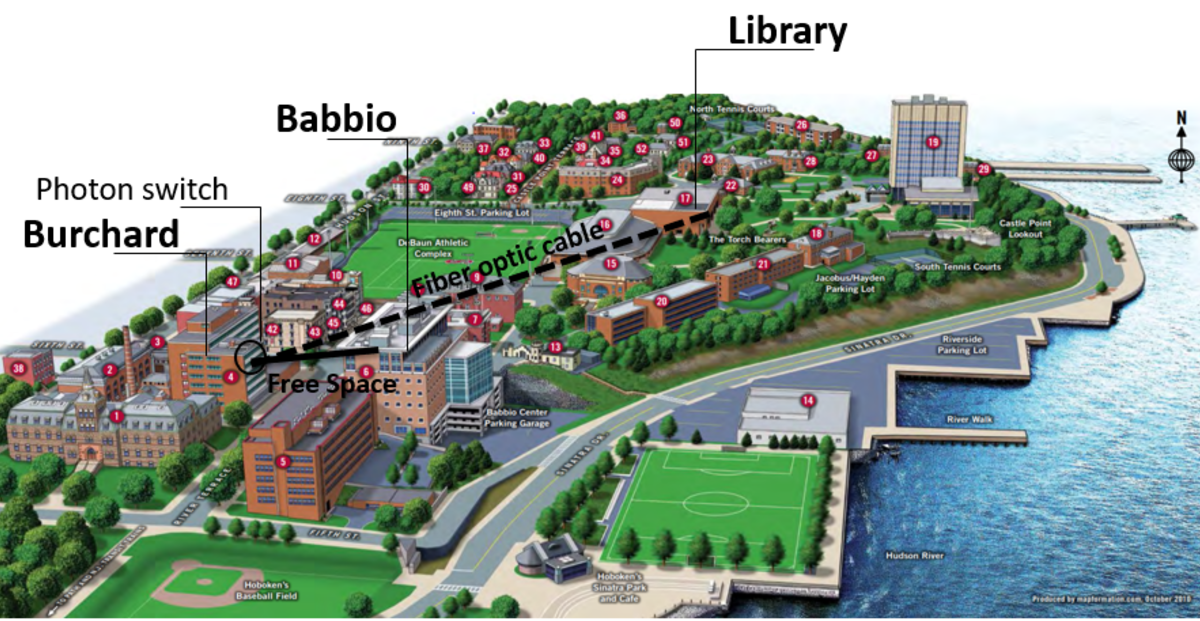 "The big idea," he says seriously, "is making quantum technology easy to use for everyone, not just in a university or government lab, and then to develop applications that harness it in ways that benefit all of us on a daily basis. Stevens has a century-long tradition in engineering and innovation; this is where we are different. We already know how to build things that work well, that improve life.

"As a quantum physicist, I will need these collaborators to take the front seats and help engineer solutions, and those people are right here."

To that end, more than 20 Stevens research groups are collected under the CQSE umbrella, working on a host of projects and potential applications Huang isn't ready to talk about yet — but to which the National Science Foundation, Office of Naval Research and other agencies have already awarded millions of dollars' worth of R&D support.

"We hope and believe quantum technologies will be able to solve real, large-scale problems that have so far defeated us," Huang concludes. "Things like diagnosing, treating and preventing cancer, or protecting private information with perfect security."

"We don't know which of these will happen first, but I believe many of them will happen here at Stevens, soon, as our team becomes larger."