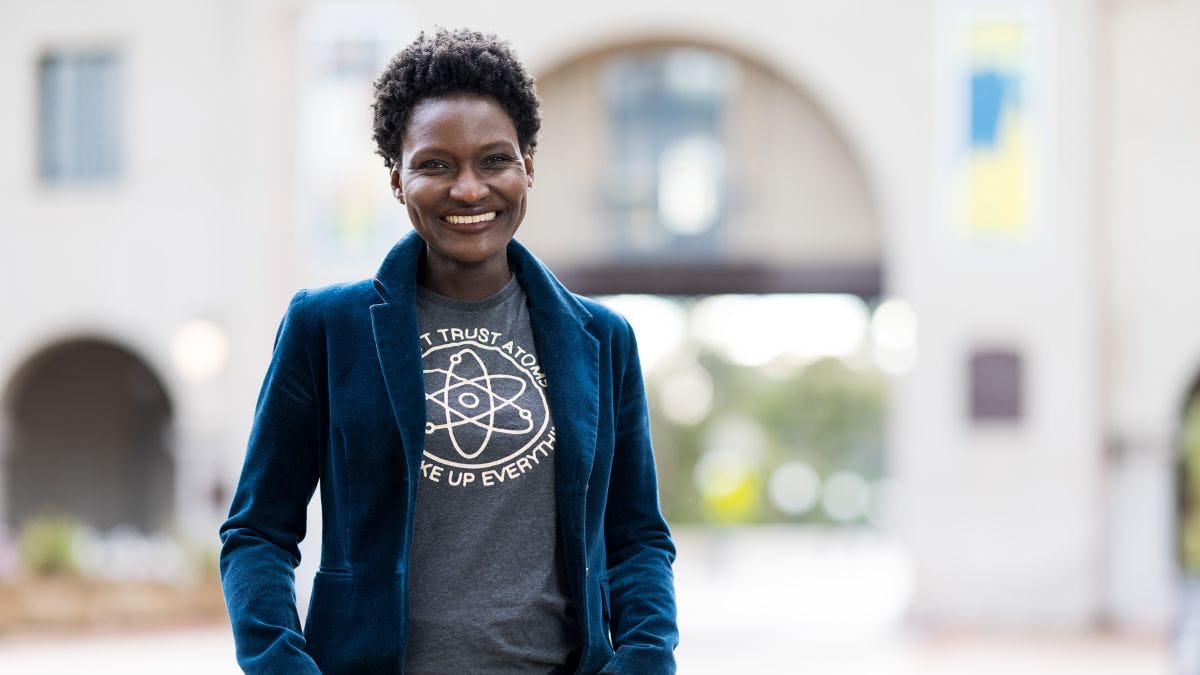 Sela pictured in San Diego's Balboa Park, near her home in Southern California

Aimiende Negbenebor Sela '04 channeled her perseverance, hunger for knowledge and openness to change to follow her passion for storytelling as a fulltime filmmaker and studio owner.

Born to Nigerian parents in New York City, Aimiende “Aimi” Negbenebor Sela ’04 spent her childhood between two continents. Shortly after her birth, Sela’s parents separated, and her father returned to Nigeria, leaving her mother to raise their two young daughters alone. By the time Sela was two, financial hardships led her mother to make a heart-wrenching decision — she gave up her youngest daughter, sending Sela to live in Nigeria under the legal guardianship of distant relatives.

Sela lived in relative comfort in her foster home. Her foster mother, a half-sister of her father, was the wealthy owner of an estate in Lagos, with plenty of room for Sela and four other foster siblings. While the children didn’t want for material things, affection was scarce, so when Sela’s father resurfaced when she was 10, she moved in with him. While living with a biological parent was an improvement in some ways, it was a challenge in others. “My foster family was wealthy, but my dad’s family was not,” explains Sela. The wealth disparity became especially clear to her when suddenly, her school fees weren’t being paid on time, and buying a new pencil meant forgoing lunch. She continued to wear shoes long after she outgrew them, and her school uniform was ripped and patched too many times to count.

The transition has had lasting effects on Sela. “My teenage years began and ended in poverty,” she says. “Who you see yourself as, your self-esteem, those ideas are formed during those preteen, teenage years. For me, they were formed in poverty.” She credits this experience with helping her develop a balanced outlook on life. “I know what it is like to have, and I know what it’s like not to have,” she says. “For instance, I hate waste. I think little things like that are embedded in my personality from living those two opposite lives.”

Education as refuge — and rebellion

Throughout her life, Sela found a haven in education. “I’ve always loved books, I read a lot,” she says. Though she found math and physics challenging, she enjoyed the feeling of losing herself as she dug deeper for understanding. “Throwing myself into school allowed me to forget everything else … if I can find a space where I don’t have to deal with my life and it’s actually productive, then I’m going to do it.” Her success in the classroom was a point of pride for both Aimi and her father, even in a society that expected marriage and children for women rather than academic achievement. “I liked sticking it to the boys,” Sela acknowledges. “So, it became a defiant thing, a rebellious thing.”

Coming (back) to America

At 17, Sela reconnected with her biological mother, who invited her to move back to New York. After about a year of living together, the family dynamic became strained. Following repeated threats of being sent back to Nigeria, Sela decided to leave. “I was just tired of not being wanted,” she reflects. “It’s exhausting.” A student at Hunter College at the time, she stayed with friends but was also homeless for a few months until she could secure an apartment through the school. It was around this time that Sela found something that she didn’t expect — a family.

While volunteering with a Harlem community youth organization, Sela met the man she has come to know as her adoptive father, David Silverberg. A Stevens alumnus (Class of ’67) and mechanical engineer, Silverberg took an interest in Sela’s education when she mentioned she was considering a major in computer science at Hunter. “You should look at Stevens!” he gushed. Silverberg guided Sela through the application process, and she was admitted in 1999. Their relationship continued, with Sela meeting and being embraced by Silverberg’s wife, children and extended family. “He started off as my mentor and then he brought me into his family,” Sela says. While there was no formal adoption process, given that Sela was over 18, she signified her newfound belonging by adding “Sela” to her last name — a Hebrew translation of Silverberg, meaning “boulder.”

We all have the same wants, hurts and desires, but so much divides us and makes us miss out on wonderful experiences with each other...; I believe we all live the same lives, we're just colored differently.
Aimiende Negbenebor Sela '04

A co-op student, Sela finished her education at Stevens in five years, earning a B.E. in computer engineering and a B.A. in literature. Following graduation, she worked in computer engineering roles at several high-profile companies, including Ralph Lauren, Accenture and Lehman Brothers before she decided to make a change. “I found my way out of that world because I just didn’t fit in corporate America,” Sela explains. “I realized there was this artistic side of me that I really wanted to pursue.”

To make ends meet while she explored a new field, Sela began working in Silverberg’s Bronx, New York, machine shop in exchange for room and board in her new family’s home. When she wasn’t working on developing prototype video cameras and accessories, she was taking acting lessons, booking modeling jobs and auditioning for theatrical roles.

A close friend, who directed her in a few theatrical pieces, was inspired by Sela’s life story and encouraged her to develop it into a short film. The two worked together to create their first-ever film project, “Asa, a Beautiful Girl,” which won Best Short Film at Reel Sisters of The Diaspora Film Festival in 2013, as well as recognition at several other festivals. Despite the warm reception, Sela is self-critical of the work, as she looks back. “It’s horrible!” she says with a laugh. “It shows all the mistakes a novice would make.” Still, it was this project that prompted her to realize: “This is what I want to do for the rest of my life.”

In the director’s chair

With several subsequent films under her belt, Sela is now a fulltime filmmaker and founder and sole owner of a production company, Sela Films, LLC. Based in Southern California, she is currently working on writing and producing a musical drama called “As the Cookie Crumbles,” a story about love, loss and unlikely connections. Much of her work centers on bridging gaps across experiences and cultures — themes that have been especially relevant in her own life. “We all have the same wants, hurts and desires, but so much divides us and makes us miss out on wonderful experiences with each other,” says Sela. “I believe we all live the same lives, we’re just colored differently.”