Want to Ditch Fossil Fuels? First, You Need a Supercomputer 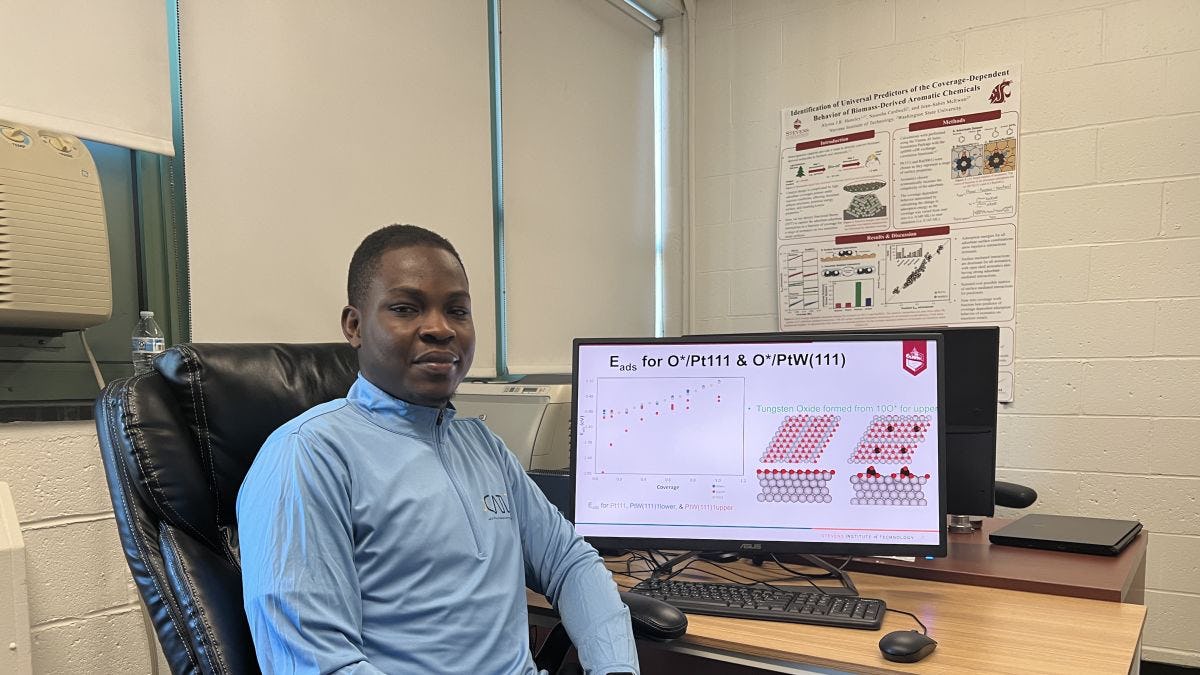 As an undergraduate studying chemical engineering in Nigeria, Ayodeji “Ay” Omoniyi fell in love with the speed and efficiency of computational research — but his university’s department had access to just two basic laptops on which to crunch numbers and build models. Now, as a first-year Ph.D. student at Stevens Institute of Technology, Omoniyi has been handed the keys to one of the world’s most powerful supercomputers: the Carbon Cluster at Argonne National Laboratory’s Center for Nanoscale Materials.

“It’s a big step up,” Omoniyi laughed. “With the Carbon Cluster, calculations that would have taken me a year can be done in just a few days.”

Omoniyi won access to the Carbon Cluster through one of Argonne’s triannual open calls for research proposals. He was assisted in that process by his adviser, Professor Alyssa Hensley of the Department of Chemical Engineering and Materials Science, who says that crafting winning proposals for research resources is a vital skill she works to instill in young scientists. “Going forward, Ay is going to have to write a lot more of these proposals,” she says.

Omoniyi will spend the next year remotely logging into the Carbon Cluster to create intricate models tracking the quantum-level behavior of hydrogen and oxygen atoms as they interact with the surface of a platinum-tungsten catalyst. That’s an incredibly complex process, but one that’s vital to the development of next-generation biofuels and plant-derived plastics.

Many biofuels — especially those derived from timber, grass, and other non-food feedstocks — contain high levels of oxygen, reducing their energy density and making them hard to blend into other hydrocarbon fuels. The solution is to reduce a fuel’s oxygen content by adding hydrogen, which binds to oxygen and can be skimmed off as water — but triggering and controlling that reaction requires specially designed catalysts. 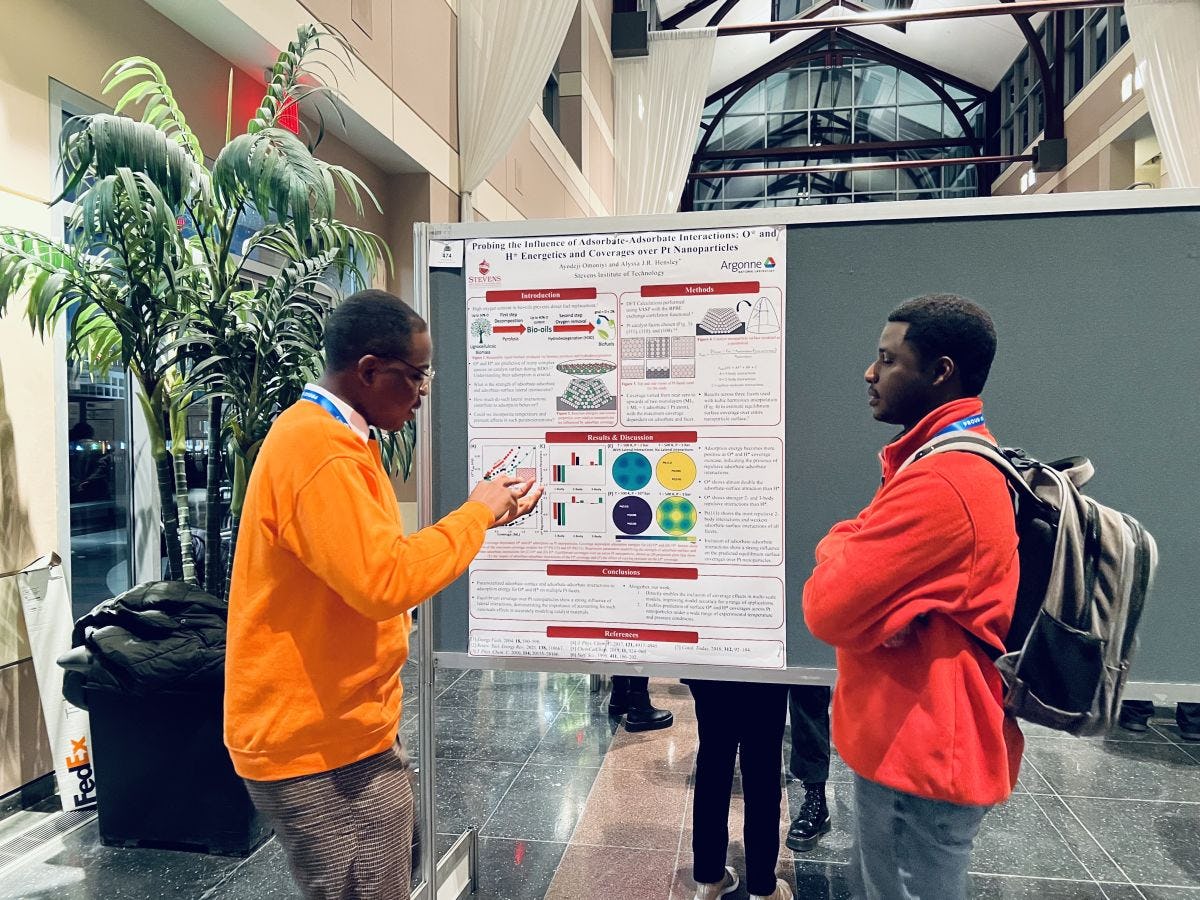 Chemical engineering Ph.D. student Ayodeji Omoniyi gives a poster presentation at the 2022 ACS Northeast Regional Meeting of the American Chemical Society conference. These results later became the foundation for the proposal he submitted to Argonne National Laboratory. Photo credit: Ayodeji OmoniyiThat brings significant challenges: catalysts made from iron, for instance, can easily splinter oxygen away from biofuel molecules, but rapidly oxidize and soon become useless. Catalysts made from platinum, on the other hand, are more stable but also more expensive to build, and can trigger unwanted reactions in which additional hydrogen atoms bind to fuel molecules.

To enable cheap and efficient biofuel deoxygenation, Omoniyi hopes to create bimetallic catalysts, using combinations of cheaper metals to emulate and even outperform platinum catalysts. Testing many combinations of materials experimentally would be impractical, given the complex nature of catalysis, so Omoniyi is using computational models to determine the factors that affect performance, and identify promising configurations of bimetallic catalysts.

“Modeling a platinum-tungsten catalyst is just the first step,” explained Hensley. “By the time he finishes his Ph.D., Ay should be ready to partner with experimental researchers or industrial groups, and tell them exactly what metals they need for optimal catalysis.”

For his current project, Omoniyi is modeling the ways that hydrogen and oxygen atoms interact with the surface of platinum-tungsten catalysts, and also describing the interactions of platinum and tungsten atoms as environmental factors such as temperature and pressure change over time. To achieve that, Omoniyi’s computer models must zoom in, and simulate the interactions of dozens of atoms at the quantum level — a ferociously challenging mathematical problem, since such systems are inherently chaotic and impossible to precisely describe.

“Quantum mechanics tells us that there’s no single answer, so we have to use approximations — and that compounds as you add more atoms to the system,” Omoniyi explained. “We have to solve a very complex matrix reduction over and over again to eventually figure out the ground-state energy of the system.”

Completing a single one of those calculations would take thousands of hours on a standard laptop, and Omoniyi will need to complete hundreds of calculations to get the desired results. “This wouldn’t be possible without the Carbon Cluster,” Dr. Hensley said. “With a few months on the Argonne supercomputer, you can do research that would take a lifetime to complete on a regular PC.”

In total, Omoniyi has been granted access to the Argonne cluster for 440,000 CPU hours — a measure of computational power corresponding to the work done in an hour by a single computer processing unit. A laptop might have a couple of CPUs running in parallel, but the Carbon Cluster runs scores of CPUs simultaneously, so it’s possible to burn through hundreds or thousands of CPU-hours in a single day of research.

The award brings the total processing time allotted to Dr Hensley’s laboratory, the Hensley Catalysis Lab, to around 1.8 million CPU hours for the 2021-2022 academic year, split across the Argonne and Oak Ridge National Laboratories. “This is a big deal, especially for a first-year graduate student,” Dr. Hensley said. “As we work to develop new processes and chemical tools to move ourselves away from using fossil fuels, accessing these kinds of computational resources is incredibly important.” Stevens has its own High Performance Computing Cluster on campus which students can use as a local resource.

For Omoniyi, developing new catalysts isn’t just an academic challenge — it’s personal. His home country of Nigeria is Africa’s largest oil producer, and before coming to Stevens, Omoniyi would sometimes travel to the Niger Delta, where massive oil spills have wrought havoc on local ecosystems and impacted hundreds of thousands of people.

“The oil gets into the rivers and kills all the fish. You can see them floating on the surface of the rivers, and the smell is all around. It’s a terrible problem for the whole region,” Omoniyi said. “That’s why I chose to work on biofuels — to try to reduce the pollution.”

The biggest benefit of using the Argonne supercomputer is that it accelerates that effort, Omoniyi explains. With oil supplies dwindling, extractive methods will grow more environmentally damaging in coming decades, he explained, so we need to move quickly to develop new solutions. “These are difficult problems, and we need to work fast to solve them,” he said. “We’re on a deadline, and using faster computers helps us get the results we need.”

That sense of urgency is what sets Omoniyi, and many of Stevens’ other young scientists, apart from the crowd, Dr. Hensley added. “I can teach a student to program a computer, but I can’t teach them to be passionate about their research,” she said. “That’s what Ay brings to the table — he’s incredibly motivated, and that’s just so great to see. Working with young scientists like Ay is what gets me out of bed in the morning."