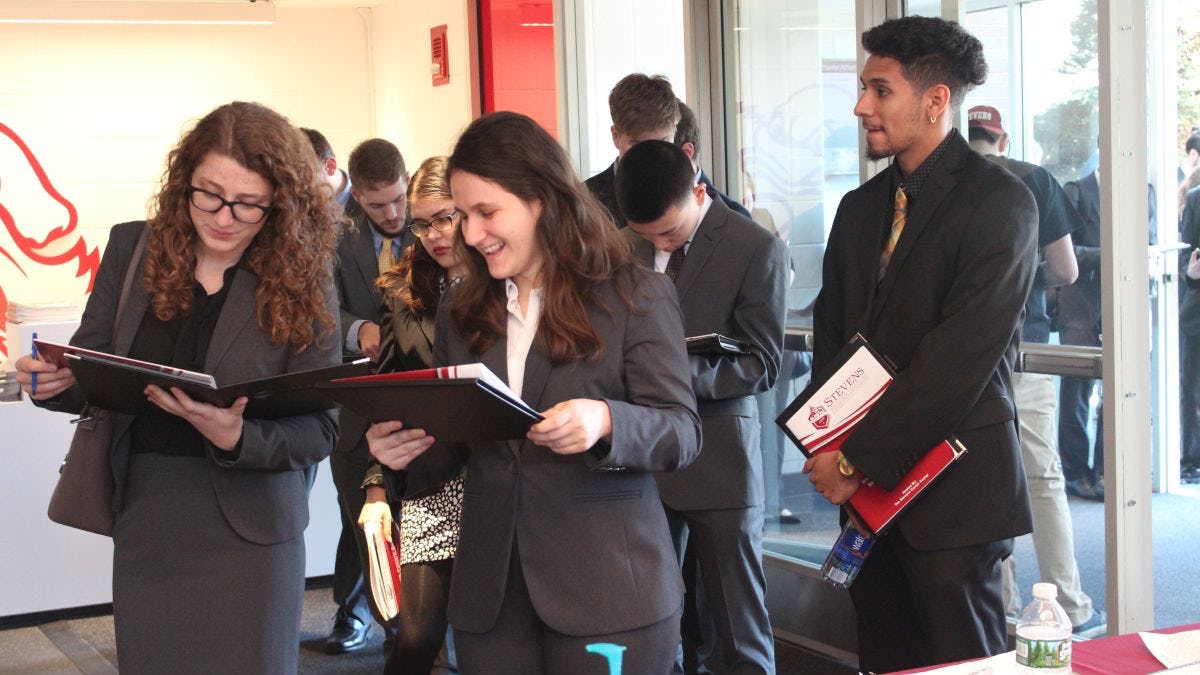 Hundreds of Stevens Institute of Technology students packed the Schaefer Athletic Center on campus for the Spring Career Fair March 8 when recruiters from more than 100 companies gathered, representing a wide range of industries from telecommunications, finance and pharmaceuticals to aerospace and engineering management.

Guanhao Wu ’19, a mechanical engineering major, was poring through the long list of employers for internship opportunities, identifying which ones for introduction and handing out resumes. He found plenty to like, using a yellow highlighter to single out leading technology companies like Cox & Company, Amerlux and Beumer Corporation. He found Beumer particularly appealing due to its worldwide presence in more than 70 countries, which includes locations in his home country of China. 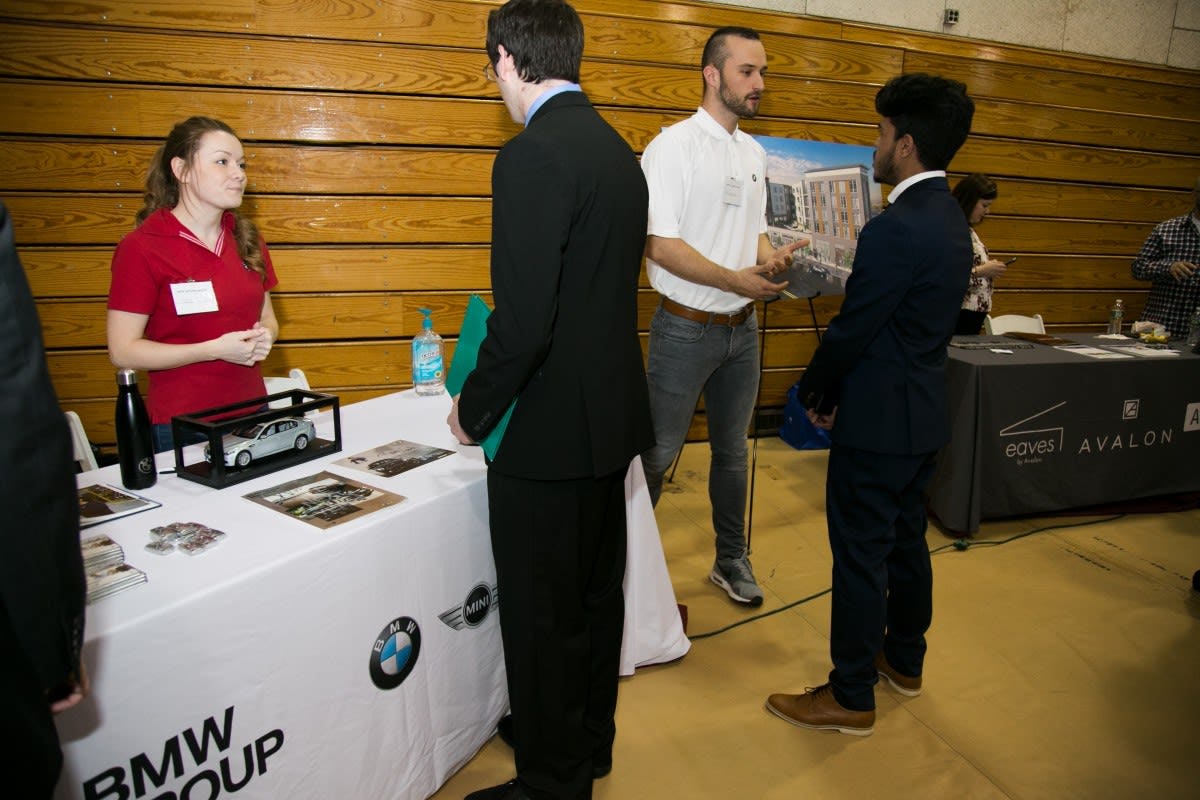 Recruiters from BMW Group meet with Stevens students about full-time and internship opportunities.

There was no shortage of brand-name companies at this year's career fair. Recruiters like Marissa Boretz, HR operations coordinator for luxury automaker BMW, came with a hiring mission to accomplish.

“We’re recruiting for six-month internships. They’re full-time, paid and a little better than the three-month internships because you get more experience,” said Boretz, adding that BMW has been recruiting at Stevens for at least four years because students here have not only the academic qualifications, but also the real-world experience to be successful at the company.

BMW was just one of the many top employers that came to Stevens to fill full-time positions and summer internships.

“Our internships often lead to full-time positions. We also have a one-year program where you work in production and then quality and maintenance. That way you get a sense of the whole supply chain production environment. After one year, you’re promoted to a supervisor position," explained Oriol Sanchez, a senior HR manager at Pepsico.

Many of the corporate, government and non-profit employers in attendance, impressed with the ability of Stevens graduates to problem solve and innovate, consistently seek out new graduates for positions in their companies. 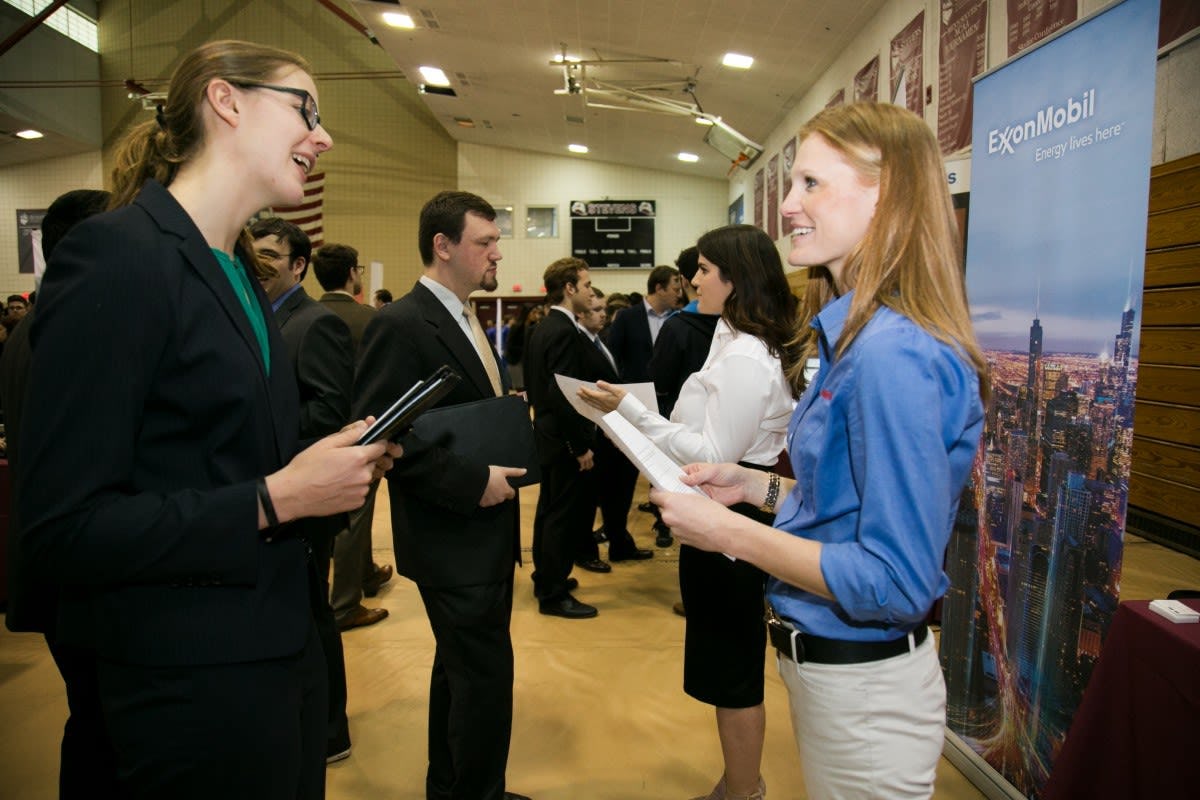 Stevens student speaks with alumna who is now working at ExxonMobil.

ExxonMobil, a repeat recruiter, was well-represented by Stevens alumni – James Szipszky ’89, Stephanie Sita ’11 and Tiffany Caroselli ’15 – who know first-hand what a Stevens education can bring to an organization with a global footprint.

“We love coming back to campus to recruit, both in the spring and fall, because of our tremendous success in bringing Stevens students into all parts of our organization in the U.S. and abroad. We go and recruit from 50 universities across the country and Stevens students compete very well,” said Szipszky.

Robert Savage, human resources director for Kulite Semiconductor Products, which counts among its clients Boeing, Airbus and SpaceX, spoke glowingly of the job-readiness Stevens students bring to the workplace as he looked to identify applicants for project management, manufacturing and design positions.

Some companies, such as Siemens, made their first appearances. Johnny Yu, business applications manager for the German industrial conglomerate, said it was Stevens’ reputation that brought him to this year’s career fair.

“We know Stevens has an excellent curriculum for preparing students for high-tech careers. Year after year, you have students coming into the field who are passionate about the industry,” said Yu. 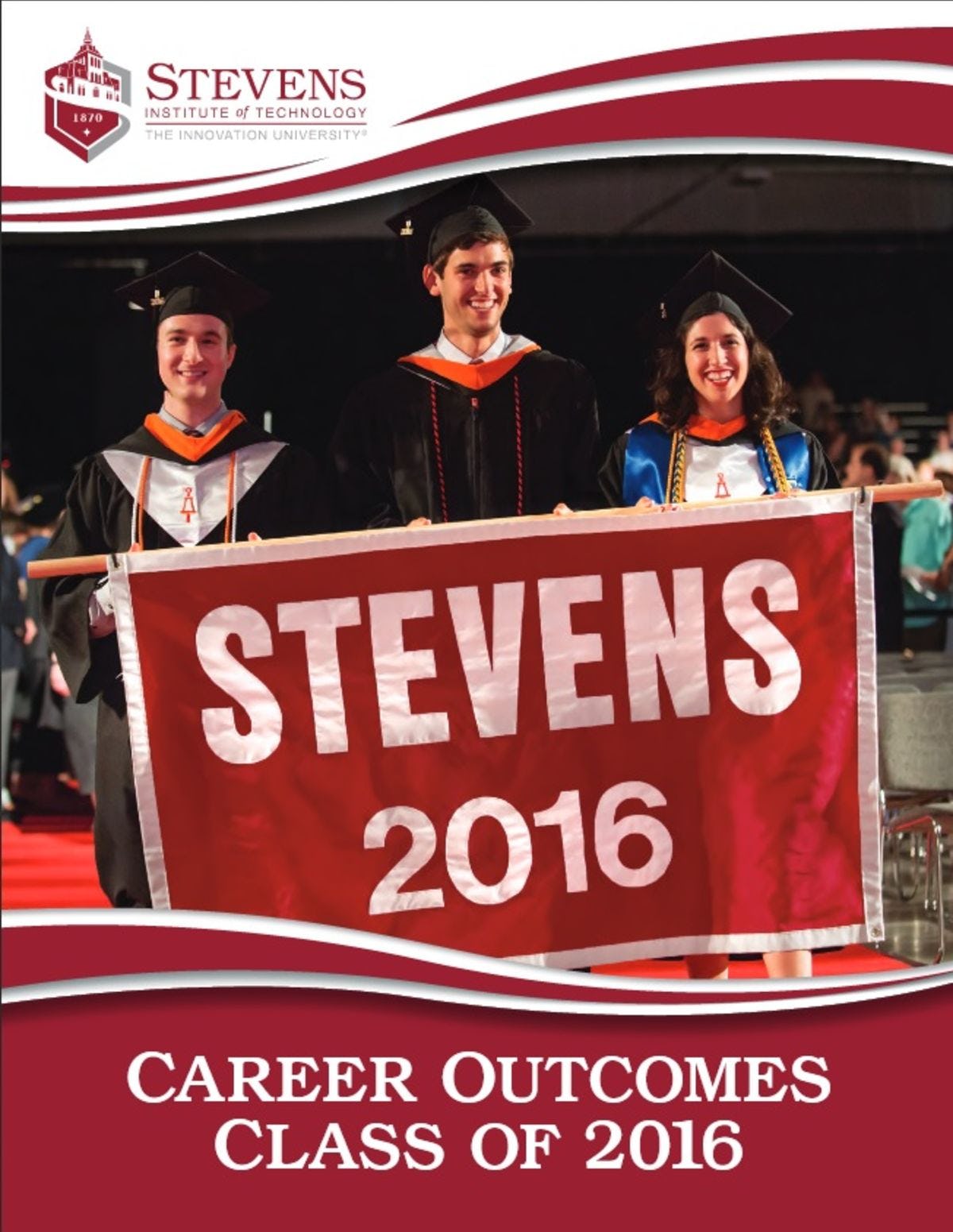 With companies like KPMG, Vonage, Vanguard and MITRE Corporation in attendance, computer science and business students were also represented in strong numbers.

Stevens senior Taylor Welch, who has a focus in business and technology and information systems, targeted iconectiv, a subsidiary of Swedish telecommunications company Ericsson; IT consulting firm GEM Technologies; and publishing giant Wiley Publishing for her meet and greet.

Welch says the trio of career fairs offered by the Stevens Career Center during the academic year provides important networking opportunities with employers who come to Stevens with the intent to hire.

According to Lynn Insley, executive director of the Stevens Career Center, Stevens students can feel extremely confident about their future careers.

“Stevens graduates continue to secure highly competitive employment opportunities and command impressive salaries. According to data collected about student successes from last year’s senior class, of those seeking employment, 96 percent finalized their plans within six months of graduation, a testament to the real-world skills and technology-driven insights that are at the core of a Stevens education.”