Streaming Video in the Blink of an Eye 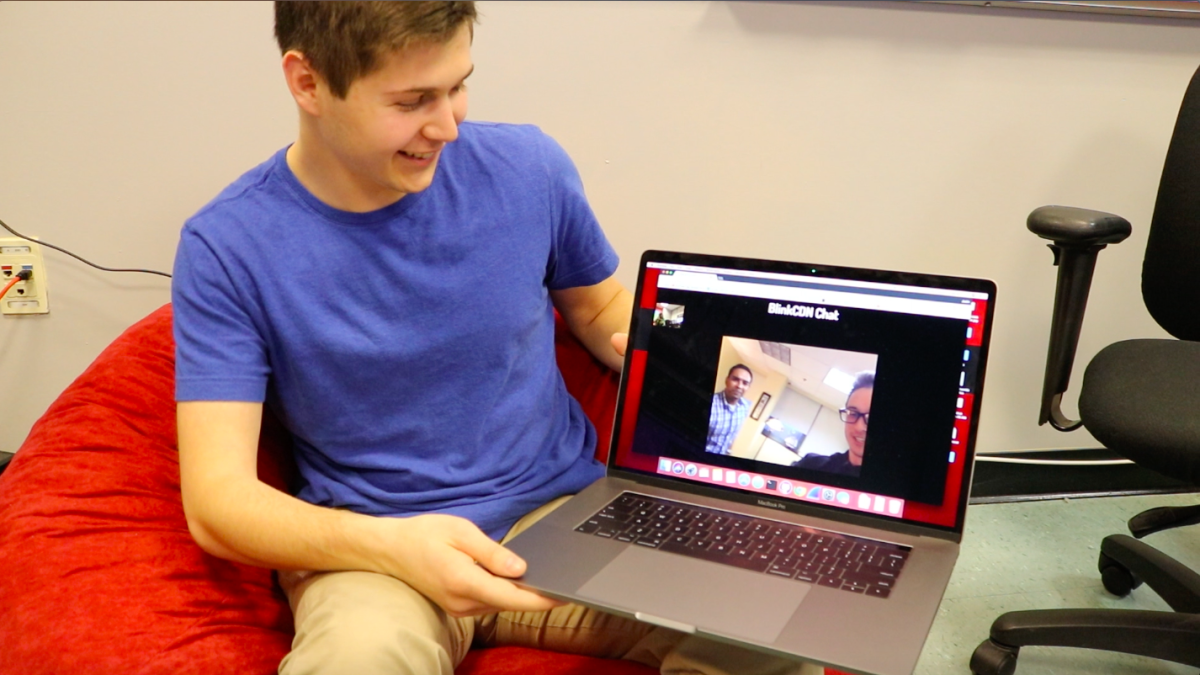 More than 80 percent of online traffic today is streaming video. From binging Netflix shows to watching YouTube tutorials to video chatting with friends and family, video is the main kind of content everyone wants and needs from the internet.

Blink CDN wants to deliver that content and more. Fast.

"We want to deliver live video in the blink of an eye—literally," says company co-founder and teaching professor Mukundan Iyengar. Iyengar teaches tech entrepreneurship in the Department of Electrical and Computer Engineering at Stevens Institute of Technology. He’s also an entrepreneur, having mentored six companies in his three years at Stevens.

Iyengar and his team have an eye for innovation and know how to roll out the next great tech product. He believes Blink CDN is that product. 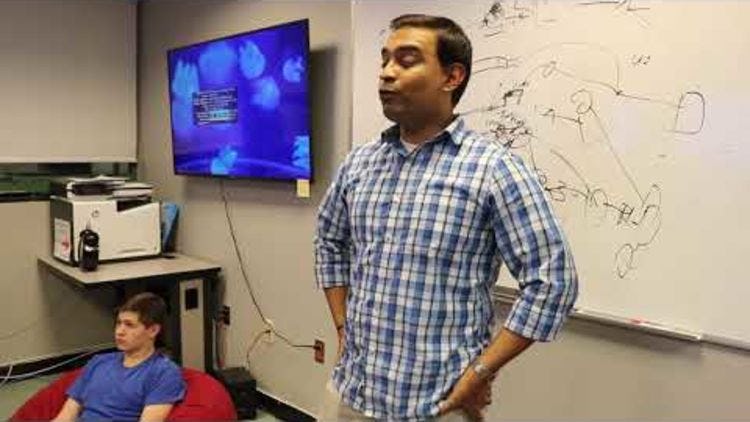 "Current broadcast live streaming has a lag of up to 45 seconds on the internet," Iyengar says. The reason is latency, as he explains:

Forty five seconds might not sound like much of a delay, but if you’re watching a live football game 45 seconds is the difference between seeing your team score and finding out about it later on Twitter. If you’re bidding for an item online, the auction may be over in 45 seconds. We want to bring that 45 second gap down to less than 100 milliseconds within the U.S.

Latency can also mean the difference between life and death in online gaming, as he demonstrates: 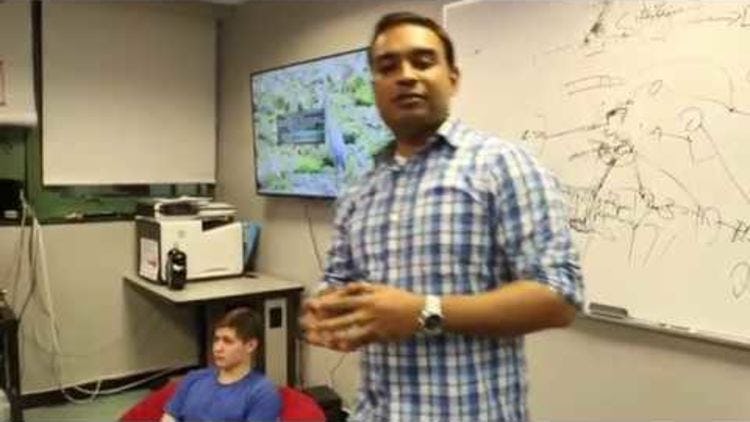 Blink CDN truly is built for speed. It can transmit video anywhere in the world using a browser in 300 milliseconds or less—which is exactly how long it takes the human eye to blink.

The Blink CDN team—Iyengar, Stevens adjunct professor and Bell Labs fellow Sudhir Ahuja, and undergraduate students Charles Bethin and Justin Trugman—are going to do all of that by building "an overlay" on the internet, as Iyengar puts it.

"We want to use the internet, as it is, to deliver a better product," he says. Think of it as a highway over the existing infrastructure of the internet. "We want to reinvent existing protocols, discover redundant and unused paths, and lower latency to cater to streaming services. We want to build a niche market around speed." Ahuja explains the technology further: 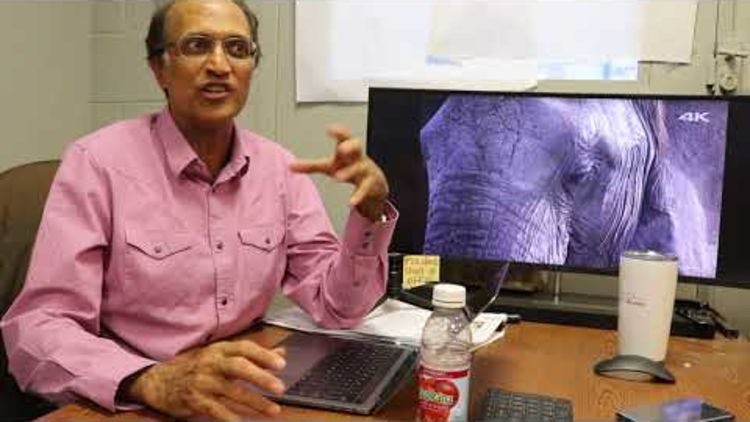 Right now, the Blink CDN team has a demo of the product up and running. They’ve tested it all over campus as well as internationally, using it to video message friends and family in Europe and India.

Their immediate goal is to build core services throughout the United States. In order to do that, they’re launching a company in January to develop the technology. They’re targeting three industries as part of the launch: online bidding, online gaming, and online meetings.

Auction houses like Sotheby’s and Christie’s serve high-end clientele who need to make split-second decisions while maintaining their anonymity. A speedy solution like BlinkCDN would greatly improve those clients’ ability to do both of those things. The team is already working with an auction house on such a platform.

Gamers need speed and the ability to communicate with multiple people clearly during their gaming sessions. The team is working with AT&T and Verizon to create this kind of product. The idea is to have gamers book Blink sessions costing between $3.99 and $5.99 per day.

Yet the largest segment of users BlinkCDN is targeting are people who use video messaging platforms. Iyengar and the team not only want to create a corporate version that’s both cheaper and more effective than the current industry leader, they want to bring that same affordable functionality to everyone who uses video messaging apps.

And they mean everyone.

"We’re making BlinkCDN for friends and family to get together in a virtual room, people who currently use FaceTime, Skype, Google Hangout—the main video messaging apps," Iyengar says. "Right now, only two people can talk to each other. BlinkCDN can bring up to 250 people together in one single chat, right out of a browser, regardless of what device they use."

Best of all, Iyengar wants to give Blink CDN away to Stevens. As a thank you.

"You can live stream anything—classes, project discussions, department meetings—at the highest possible quality, for free" he says. "You’ll never miss a class again" he adds, laughing. Bethin demonstrated for us: 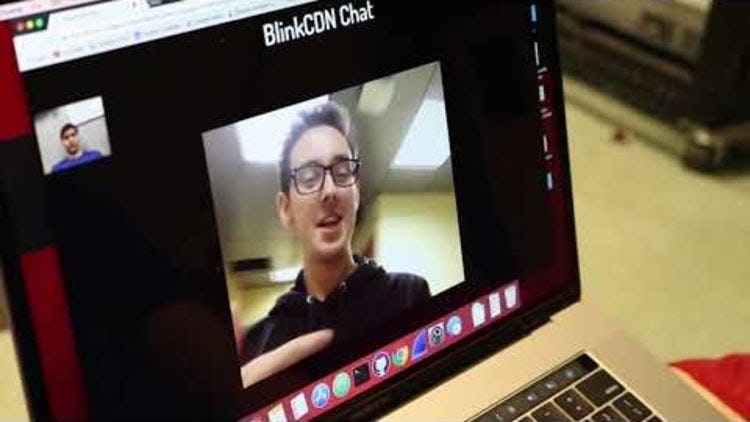 Blink CDN is set to launch on the Stevens campus at the end of the semester. But that’s only the beginning, as the team sees it.

"What’s going to happen to the human race is we’re going to cut the cord," says Iyengar. "We’re going to enjoy TV cord-free, whenever we want, the way we want. That means virtual reality, augmented reality, 4K television, drone cameras, curved OLED screens and everything that’s going to come after."

"The trend is happening because people are naturally video-oriented," says Ahuja. "We predominately observe the world through our eyes. Our eyes process thousands and thousands of bits of information every second."

"Most people share a photo and a caption about their lives," Iyengar adds. "We want you to share your whole experience. We want to make human beings their own broadcasting stations—but the internet can’t support that. Yet," Iyengar says.

"We’re trying to change the internet on a fundamental level." BlinkCDN is sponsored by Verizon.