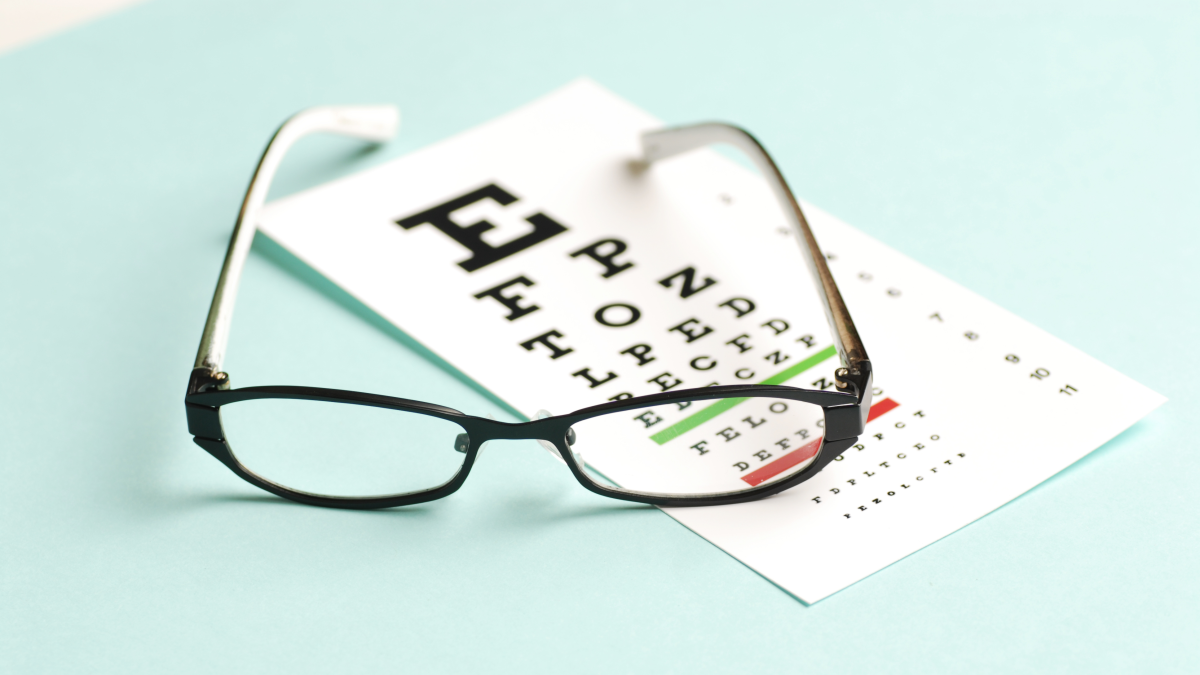 “Is it better this way, or this way?”

If you’ve ever been to an ophthalmologist or an optometrist, you probably recognize that question, asked from the other side of a big piece of equipment – called a phoropter, or refractor – positioned in front of your face as you attempt to read an eye chart through distinct clicks of lens combinations. The results allow the healthcare professional to determine the strength of the glasses or contact lenses you might need to see properly. It’s a hundred-year-old approach that two Stevens Institute of Technology students think is long overdue for a modern makeover.

“During the spring semester of my junior year, I had an eye examination that left me annoyed and frustrated,” recalled Alexis Edgin ’21. “I went to class complaining about the tedious lens switching process, and the fact that my insurance wouldn’t cover the more advanced electronic autorefractor – where you look into a viewer at a picture of a little house, and it measures your eye’s refractive index and focal point, and calculates your prescription. It would have speeded up the visit, but I would have had to pay an additional $60. I didn't even have $60 in my bank account!”

As one of only two seniors in Stevens’ new engineering with a concentration in optical engineering, Edgin had a very small audience for her rant. Her professor, Rainer Martini, associate professor in the Department of Physics, agreed right away, and after Dolores Termini ’21 had her first eye exam a week later, she understood the struggle as well. The students realized they had found their Senior Design project topic, and began their research in earnest.

“To our surprise, we found that the basic phoropter has not been changed since its invention in 1918,” Edgin said. “There are tons of lenses – why are we still only switching two for this exam? And the outdated examination techniques can lead to inaccurate lens prescriptions. Modern autorefractors can cost more than $60,000, a significant expense that is passed on to patients. We have self-driving cars, and we have talking robots in our pockets with our cell phones – why don’t we have better, affordable equipment to care for our eyes? We felt this was the perfect issue for Stevens’ first-ever optical engineers to tackle.”

In thinking about how to solve this challenge, they rejected previously proposed options using air, fluid, and electricity in favor of a solution that no one else had tried. Early on, they considered options such as light detection and ranging, or LiDAR, but kept looking after Martini explained those methods are not safe for human eyes.

And then, everything came into focus.

“We thought about the sliding lenses that you twist on a zoom lens on a camera to focus on different things,” Termini explained. “Glasses have a similar effect. We came up with this gradual mechanical change, similar to a zoom lens, with a lens that slides in the middle to change the power of the entire system. Wherever it looks clearest for you, that would be the strength of the prescription that you would need. It would be faster, and more accurate.”

That accuracy is key, particularly in light of their findings that traditional phoropters measure in different increments than the eye actually functions.

“Phoropters measure in 0.25-diopter increments, but we see in 0.10-diopter steps, which is such a big difference,” Edgin said. “If you’re between 0.25 and 0.50, for example, you either get a prescription too strong or too weak.”

“Professor Martini brought us an article that said if you have a prescription that is weaker than what you need, it hurts your eyes and can even cause migraines, and if your prescription is too strong, your eyes accommodate to it and get worse more quickly,” Termini added. “Our solution allows the doctor to gradually increase and decrease the lens power to eliminate the eyestrain that results from manually switching lenses, and narrows in on a more precise diagnosis so patients can see clearer for longer.”

Sometimes, the biggest ideas are the simplest.

“It's not deep or sci-fi hard-hitting,” Edgin said with a laugh. “It's a couple of lenses moving back and forth. We have that technology for cameras and other machines – why don't we use it for our eye health? I’m still surprised that it hasn't been done yet. It’s not difficult.”

They surveyed the Stevens community, asking if a slider system with a gradual increase of power would be more beneficial, and about 75 percent of participants said “yes.”

Ensuring a clear view with youView

Not content to stop with the mechanical upgrade, particularly as the pandemic prevented them from creating a prototype, Edgin and Termini then turned their attention to the holistic care experience, adding a patient quiz to the package.

“We developed a unique algorithm that could predict the patient’s prescription range based on daily activities,” Edgin explained. “If I read in the dark, late at night, or I drive at night, or I spend time outside in the daylight, or I spend time on my computer or looking at the blue light on my phone, how would those daily activities affect my eyesight? Our quiz is designed to predict how much your eyesight would be affected by how many hours you use them for certain activities, and calculate what your prescription would be within a specific range, so that the optometrist could make the exam time shorter and more effective by starting within that range and using our refined phoropter to hopefully find a perfect fit for the patient.”

They found plenty of research supporting the qualitative dangers of activities such as reading in the dark, but no conclusive quantitative research indicating the correlation between the number of hours and the level of vision damage. If they can find that data, they’ll be able to write code into the algorithm to improve the quiz. They’re also working on a website interface.

“It's rewarding that we're solving a real problem that we could see and experience, and that could help patients view the world as it was meant to be seen,” Termini said. “It is definitely time for change, and the practical application helps us stay focused on it.”

“We were hesitant because it sounded like such a difficult problem, and maybe there’s a reason this equipment hasn't been changed in more than 100 years,” Edgin added. “But then when we learned more about optics, we realized it's a simple problem. It taught me that humans are lazy! If things work well enough, they'll leave them alone, and only modernize the glamorous things like cell phones and cars, but not things that matter to your health.”

Their advisor, Rainer Martini, associate professor and associate dean for graduate studies at the Schaefer School of Engineering and Science, praised their approach.

“Alexis and Dolores have been innovative, hard-working, and independent,” Martini said. “They’ve really put our design process into practice, identifying the problem, thoroughly understanding what the customer needs, and thinking about designs and not just what solutions would work, but what would best address those needs. It’s more of a practical approach than a traditional physics degree demands, and it’s what our skill sequence for the new optics degree is designed to do, so it’s gratifying to see that the process has worked for our first two optical engineering students.”

After they graduate in May 2021, both Alexis and Dolores intend to continue their work in optics.

As an intern with the Naval Sea Systems Command (NAVSEA) in Dahlgren, Virginia, Edgin has spent the past year working on high-energy laser weapons, and she has accepted a full-time job offer that includes the flexibility and encouragement, both financial and personal, to continue her studies.

Termini’s next stop is New Jersey Institute of Technology, where she’ll begin pursuing her master’s degree in material science this fall, with a goal of developing thin films for things such as the antireflective coatings on glasses and electronic equipment.

“I came to the Stevens majoring in computer engineering, but ironically not knowing much about it, and I almost immediately switched to engineering physics because I enjoyed physics more, but I still wanted to stay in the engineering mindset,” Termini said. “When it came time to choose my concentration, I had taken one optics class, and then I talked to Professor [Christopher] Search about optics and the new Stevens program, and it was interesting! I had already taken most of the classes I would need. There's a lot of crossover among optics and chemistry and materials engineering, and I liked all of them. It made me feel more validated and eager to learn. It's used in so many applications, and I got the opportunity to work with lasers, which was pretty cool, like being in a sci-fi movie.”

Pioneering a program, including taking classes that had never been offered before, provided an opportunity to develop both their hard skills in academics and their soft skills in dealing with the unexpected challenges.

“It has taught us to be resilient and to actively contribute,” Edgin said. “We had to be patient and learn with the professors. Because this program isn't set in stone yet, we learned to give feedback so the professors and the school can continue to improve upon the program.”

For Edgin, changing majors from physics to optical engineering was literally life-changing.

“I came from a rural area, and I got a good scholarship, but ever since I stepped through the gates at Stevens, to put it bluntly, I had felt that everyone was smarter than me,” she said. “Physics was so theoretical, and the smartest and brightest were in physics. It was intimidating. When Professor Search mentioned this program, I already liked optics. I liked that it was hands-on work, and more application than theory-based, which is harder for me to grasp. The minute I switched, my grades shot up, and I was genuinely enjoying what I was learning. I realized this is what it's like to study something that you want to study. It was the first time that I felt I was doing school not because I needed to do it, but because I enjoyed it.”

Alexis Edgin and Dolores Termini finished as finalists in the annual Stevens student elevator pitch competition. “To have the first students in the optical engineering program do so well is a great honor for them, and a great mark of success for the program,” said their advisor and professor, Rainer Martini.