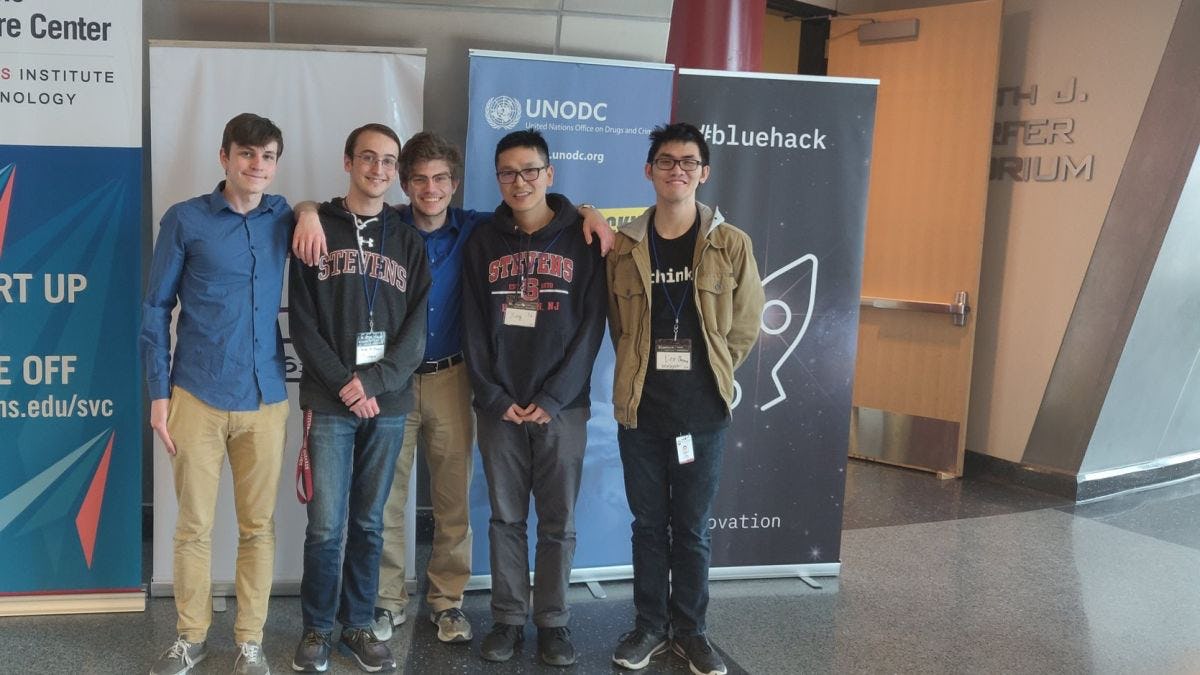 Team Argo, the first-place finisher in the BlueHack Against Human Trafficking

With support from tech giant IBM, the United Nations and Fundación Pasos Libres, Stevens Institute of Technology students have teamed up to develop technologies aimed at combating human trafficking.

More than 40 students this past weekend participated in a hackathon designed to harness digital technology and the imaginations of eager undergraduates to find new ways of combating an international scourge that affects tens of millions of people each year, according UN estimates.

Dubbed BlueHack, the two-day event, which took place on Stevens’ Hoboken campus, was the first of its kind in the United States. Two similar hackathons were held last year in South America.

Impressed by the work of the Stevens students, officials from the UN Office of Drugs and Crime expressed interest in adopting several of the technologies developed at BlueHack as part their anti-trafficking efforts, event organizers said.

“It just shows how talented Stevens students are,” said Justin Trugman, the student Hackathon organizer for the Stevens Venture Center. “The teams came up with some technically advanced solutions and the U.N. is very enthusiastic about using this tool. To see this kind of reception for student-development technologies is very exciting.”

The BlueHack students formed seven teams that brainstormed methods of identifying victims of trafficking, ways to aid authorities in helping crack down on traffickers and related issues.

IBM staffers were on hand to provide technical support, software and other technologies that the students could employ in their work. The two other co-sponsors — the U.N. and Pasos Libres Foundation, a Colombian anti-trafficking group — offered information and guidance. In addition, the students were mentored by local business and technology experts provided by the Stevens Venture Center, which hosted the event.

BlueHack culminated in a competition in which the teams presented their ideas to a panel of technology, business and law enforcement experts. The top three teams won coveted invitations to tour an IBM research center.

Argo, the top team, developed an interface to help prosecutors rapidly comb through reams of social media data, looking for posts and messages that could be indicators of trafficking activity.

The third-place team, Victim-Centered Solutions, created a “honeypot” app that could potentially lure in traffickers so they could be apprehended.

Trugman said UNDoC hopes to combine the work of Argo and HTKG into a single tool that it could use.

Prior to the start of the brainstorming sessions, the participating students were briefed on the scope of the human trafficking problem by experts from various organizations that have direct experience fighting human traffickers, including the Manhattan District Attorney’s Office and New Jersey Statewide Human Trafficking Services.

Hernani Goncalves, now a Stevens Police officer, spoke about his experience breaking up a trafficking ring in Newark when he served on the police force.

Participation may also pay dividends for the students down the road. IBM impressed enough to collect resumes from a number of students so they could be considered for internships. Pasos Libres invited a team of students to Colombia in August to participate in another hackathon. And Justin was invited to apply to become a One Young World ambassador.