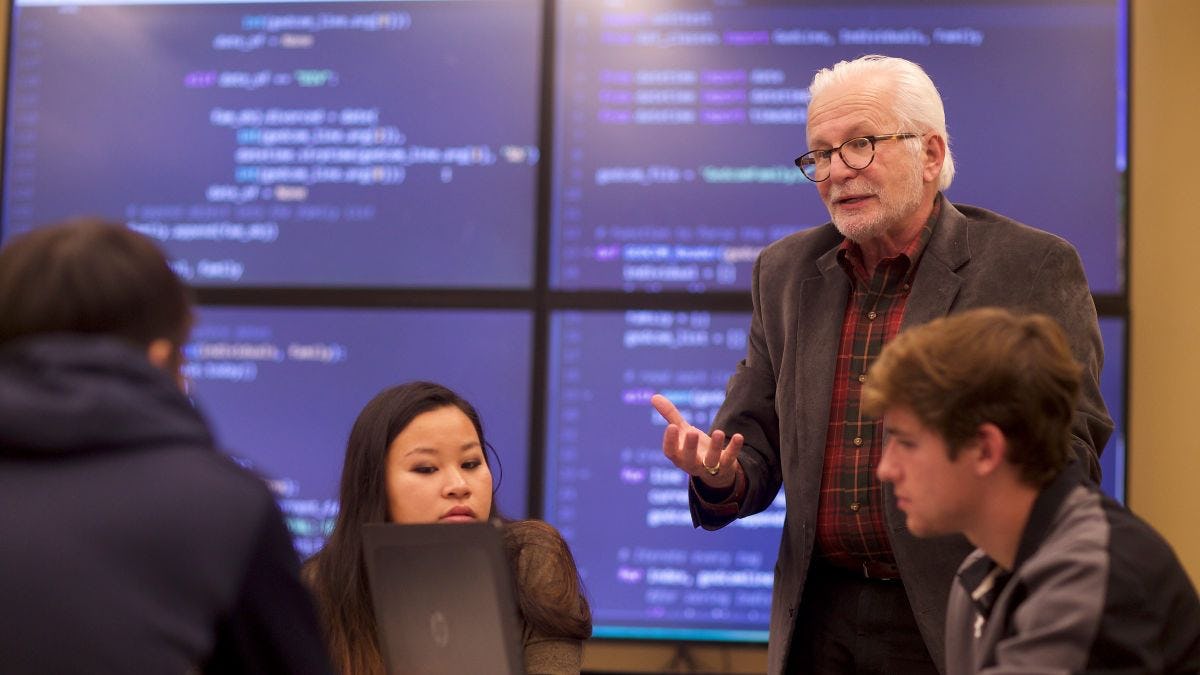 In their research, software engineering students from the School of Systems and Enterprises explore smarter campus spaces and the use of robots in eldercare

Research papers from two teams of Stevens students were selected for the 2017 IEEE Annual Ubiquitous Computing, Electronics & Mobile Communication Conference (IEEE UEMCON 2017) which took place earlier this month. IEEE UEMCON 2017 is an annual event which provides researchers, educators and students with opportunities to discuss and exchange ideas on issues, trends and developments in the areas of Computing, Electronics and Mobile Communication.

The Stevens students’ projects are part of the Pinnacle Scholars Program, an elite, invitation-only program for undergraduate students at Stevens who want to push the boundaries of their education even further.

“Having our submission accepted to the IEEE conference is a huge accomplishment in my eyes. I never expected to have completed a research paper like this by the beginning of my sophomore year, and I'm so grateful to have gotten the chance to not only get experience in the lab, but also practice my skills in conveying my work to others,” says Kristen Tan, who together with Stevens students – Nicholas DiMaria, Bruno Salgado, and Wenkang Su – worked on a project involving the use of robots in eldercare. The team presents their findings in their paper, “Eldercare Robotics Revolution- Explaining Robotics for Eldercare.”

In another paper, “Smarter Spaces, Smarter Campus,” Stevens software engineering students – Sam DeLorenzo, George Ibuna, and Sean Trinh – present their research on Smart Spaces, which are environments that seamlessly interweave sensors and displays to improve knowledge of surroundings as well as quality of life.

While these two teams worked on vastly different subject matters, they were both able to take advantage of a shared resource: the Altorfer Design Lab (ADS Lab). The ADS lab is an advanced learning space which is used by software engineering students from the School of Systems and Enterprises (SSE).

“One of our goals in Software Engineering education is to get the students involved early and often both in research and in building systems. We established the ADS Lab as a basecamp for these efforts and we are seeing results. This summer two groups of undergraduate students built projects relating to eldercare and smart cities that resulted in working prototypes and conference papers,” says Dr. Gregg Vesonder, industry professor and program manager of the Stevens software engineering program.

Below are some details of the students’ research and their experiences during their projects:

The increased use of these smart technologies are creating more citizen scientists, particularly in urban areas, who will become more involved in the collection and analysis of data. This provides opportunities for them to become active contributors in improving their environments. For their project, the team wanted to investigate how simplified processes might encourage involvement of citizens of all ages and backgrounds to make better use of data about their environments and surroundings, and subsequently leverage that data to improve their quality of life.

The team constructed sensor suites based off Raspberry Pi’s, and mounted them at various locations around a building on the Stevens campus in Hoboken, N.J. to collect and analyze data in the ADS Lab. In their paper, they present the results of their findings in the use of temperature sensors, humidity sensors, UV/RGB sensors, and noise sensors.

“With this project, we collected real data and were able to see how that data influenced us and how people could use that data to learn more about their environments, whether it be somewhere on campus or their own apartments in Hoboken,” says Sean Trinh.

According to a recent U.S. Census report, the population of aged 65 and over in 2050 is projected to rise 83.7 million – nearly twice the size of the estimated population of 2012. Conditions and diseases associated with aging can cause some people to experience deteriorating mental and physical capabilities, which for many, means having others care for them. In addition to daily living care and assistance, assisted living facilities can provide independence for the elderly. But paying for these services can be expensive, and not all assisted living facilities provide the highest level of care that families hope for. And for many, reduced independence and being placed in a senior living facility can be considered a degrading and demoralizing experience.

Recognizing these challenges, this team of Stevens students researched how robot technology might help and investigated how the use of robots might improve the health and safety of an elderly person in their own homes. In their experiments, they used a number of simulations in the ADS Lab to generate insights regarding the viability of implementing robots in a real world eldercare setting.