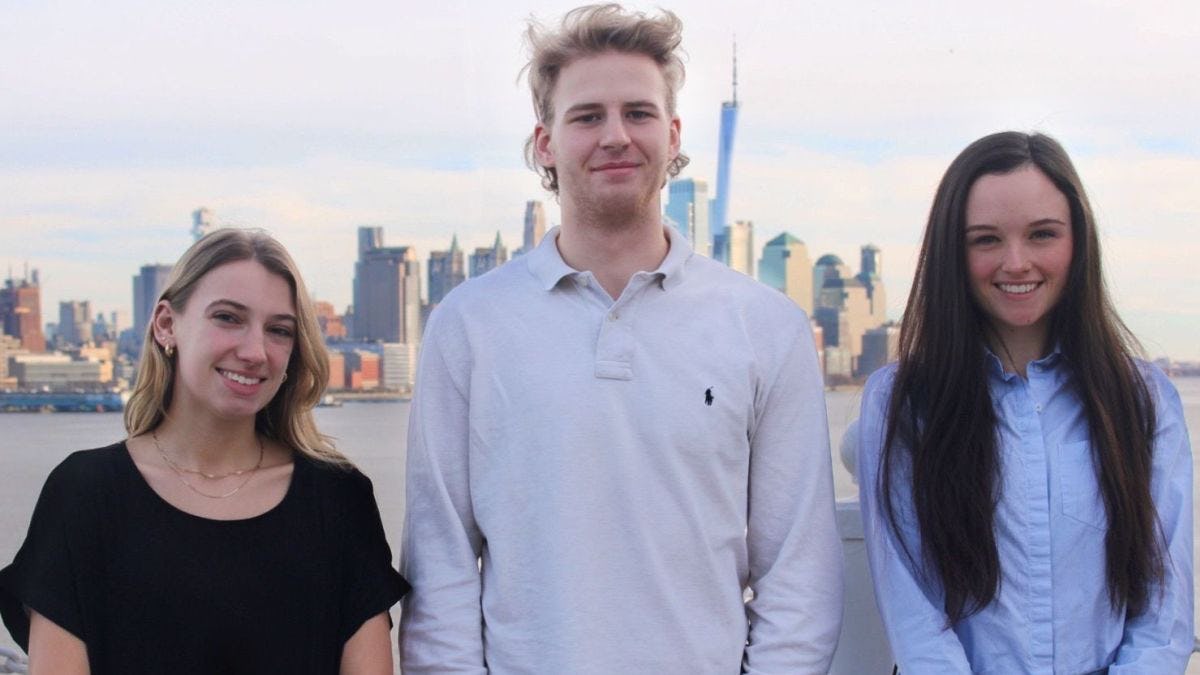 Left to Right: Olivia Anagnostis, Sean Scadden, Caroline Montana: Anagnostis ’22, Montana ’22 and Scadden ’22 say they relied on the individual strengths of each team member and the support of their advisor Yujun Zhao

The model transforms a common household plastic into chemicals that can be sold to industry to recover the costs of the recycling plant in under five years.

Search for “plastics pollution,” and you’re likely to return image after image of plastic bottles and grocery bags heaped onto the shore or floating in the ocean. Many of these are high-density polyethylene (HDPE), one of the most common household plastics that’s used for milk jugs, sturdy bottles and caps and grocery bags. While it’s possible to recycle this material into things like pens and traffic cones—and it’s stamped with the number 2 recycling symbol—less than 30 percent of all HDPE is recycled.

That’s the problem tackled by Stevens Institute of Technology seniors Olivia Anagnostis ’22, Caroline Montana ’22 and Sean Scadden ’22 as part of the annual Innovation Expo. With the guidance of associate professor of chemical engineering and materials science Yujun Zhao, the team designed a recycling plant capable of converting HDPE plastics into 1-chloropentane and hydrochloric acid and then demonstrated that selling these industrial products could make the plant profitable in just over four years.

An Innovative Approach to Recycling

Originally, the team planned to work on another project, but when that stalled out, they jumped at the opportunity to design their own project. “I think the most exciting part of this project was not knowing what direction we were going to go,” explained Montana. “…Our advisor essentially told us to research and then come back to him. So, each week when we went in, we were reshaping the project and remolding it and redefining it. So, it's the brainchild of the three of us.”

Zhao tasked the team with exploring a list of current issues. “We started looking at one of the problems and an article in the American Institute of Chemical Engineers, which was talking about the massive buildup of HDPE and how they're trying to combat the high waste of HDPE by turning it into different products,” added Scadden. “So that’s how we got started.”

The team used Aspen Plus software to design their recycling plant, which combines two reactors as well as pumps, compressors and separators. The first reaction is hydrogenolysis, which uses hydrogen to break down HDPE into a carbon derivative called pentane. Since the pentane market is small, the team piggybacked on a second reaction called chlorination, which adds chlorine to pentane to form 1-chloropentane and hydrochloric acid. These chemicals are rust removers that are important for any industrial application involving metal surfaces. The team also targeted the pool chlorination industry since hydrochloric acid is critical for adjusting water chemistry to minimize problems like algae and mineral buildup.

“Once we were able to get working on the simulation, I think the most enjoyable part for me was seeing the simulation all come together,” noted Anagnostis. “It was really rewarding to see our work in one piece and working how we wanted it to work.”

The team’s economic analysis showed profit margins in the hundreds of millions, making it feasible for the recycling plant to pay off its startup costs in just 4.4 years. “Our model is just that: a model,” Montana noted. “But I think you could take it and make something that would entirely change the recycling of plastics.”

Taking Stevens’ Lessons into the Future

Last week, the team pitched their final projects to their class, and their HDPE recycling plant was one of two projects to move on to the semi-finals. In the finals later this month, the top three projects will win cash prizes of $10,000, $3,000 and $2,000, respectively.

Anagnostis, Montana and Scadden say they will carry some of the lessons they learned while working on their Innovation Expo projects with them as they graduate this spring.

“For me, it’s this determination and motivation and confidence that we'll figure it out,” said Montana, who plans to move to Florida and pursue work in the energy field. “We worked for months on a completely separate project, and when that got shut down, we had to come up with something new. And none of us were worried! We were confident that we had the ability to pull it off in time and make something great. So, I think I'll take that with me.”

Scadden has accepted a job offer from Saint-Gobain in Los Angeles, where he’ll work in the microfluidics division doing research and development for cancer delivery systems. He took a gap year to focus on his internship during the pandemic, so he’s graduating with nearly three years of real-world experience under his belt. “The other part that I want to keep doing is always looking out for bettering the environment,” he added. “I think it's something that I have to keep with me as I go through my whole life, just looking at ways to help the environment.”

For Anagnostis, who’s earning an economics minor in addition to the chemical engineering degree and hopes to work for a manufacturing company, Stevens’ experience-oriented curriculum was a big deal. “I think our classes working with Aspen and working hands-on on process design helps a lot,” she said. “I think that there are still things to learn from experience in those roles but learning them at school gives you a good foundation to not feel super intimidated when you're given this new program to design processes and stuff like that.”