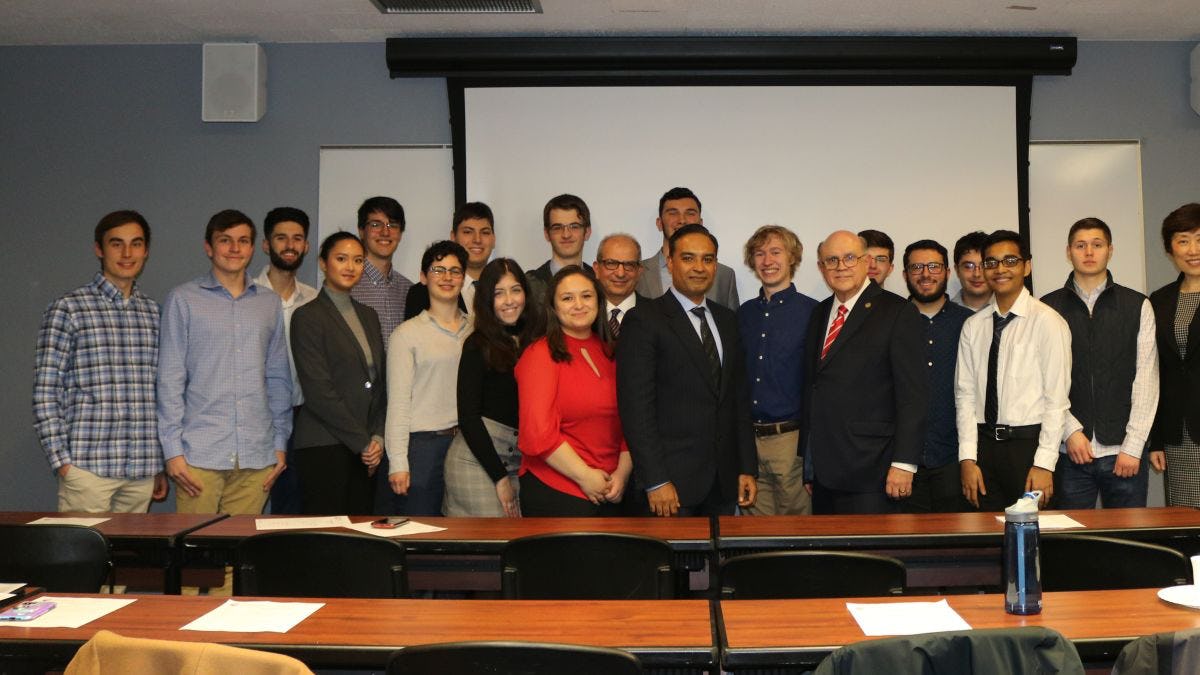 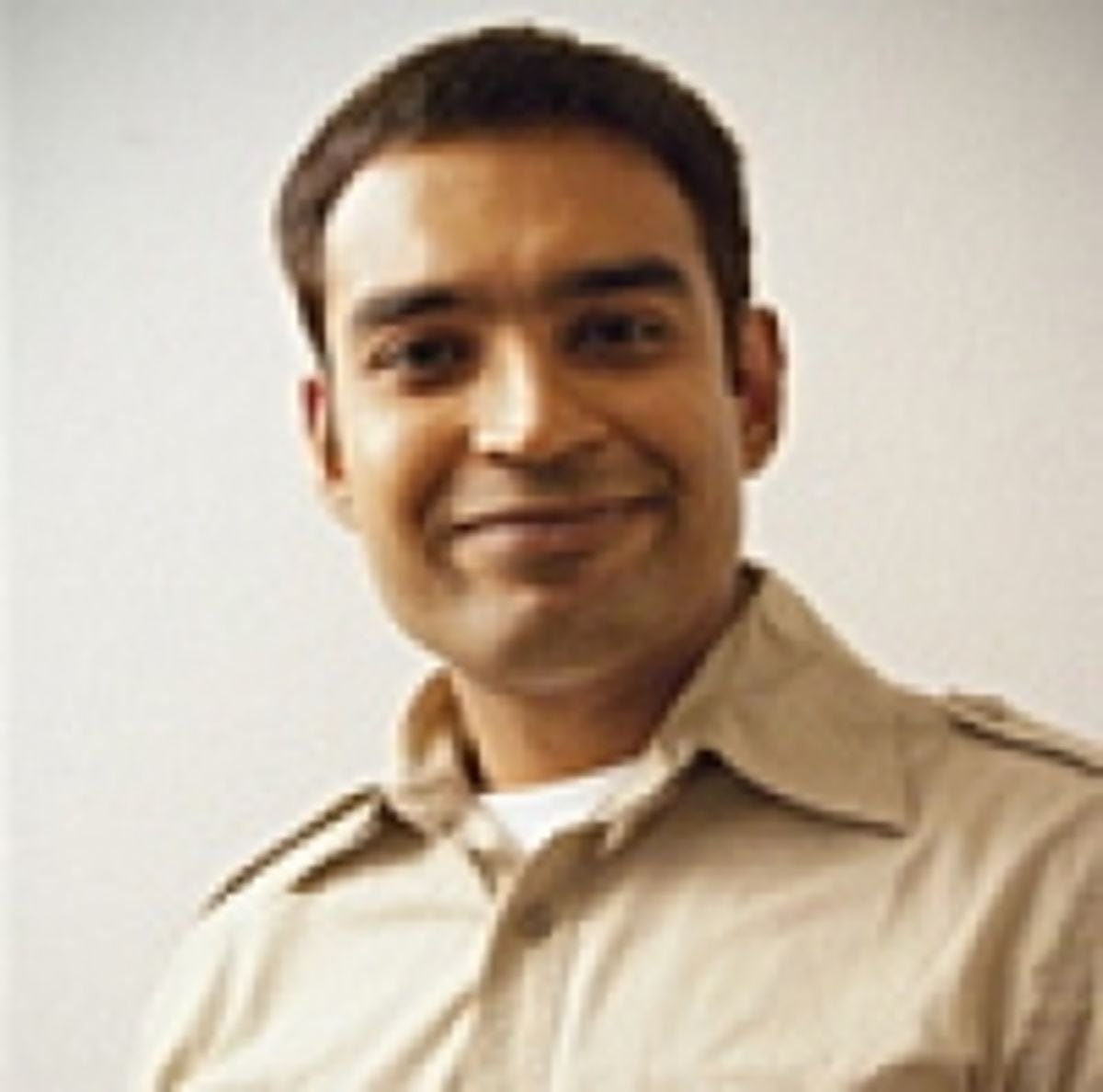 [email protected] is a unique educational pathway and entrepreneurship training program created by Stevens Institute of Technology to transform incoming freshmen into future leaders and game-changers in the tech industry.

But for [email protected] Director and electrical and computer engineering associate professor Mukundan Iyengar, iSTEM really begins with a story about bees and woodpeckers. “The woodpecker is a very curious bird that needs things like honey and nectar for sustenance,” Mukund explained. “But it doesn’t do what a bee does, which is go from flower to flower. Instead, the woodpecker does something irrational: it finds a giant tree, latches onto it, and begins to peck. Meanwhile, the bee down below watches, completely baffled because it knows that there is plenty of nectar in the flowers.”

“In the beginning,” Iyengar continued, “bark is flying, and there’s a lot of wood and dirt, but no nectar. Five thousand taps become fifty thousand become a million taps, and then something miraculous happens. The woodpecker taps into the sap of the tree, and in the process he’s also carved out a hole around which he can build a whole family, one that never has to look for food because an endless supply of tree sap is always available.”

But what does this have to do with the [email protected] program?

“iSTEM is different because we’re like woodpeckers,” Iyengar explained. “The things we do early on may appear very irrational, but the longer we do them, the gap between what is iSTEM and what is not iSTEM becomes unfathomable.”

“People are out there who are wired a little differently, who do things for the fun of it rather than for the grade,” Iyengar said. “Emilio felt we needed to tap into those kinds of people, help and support them.”

The program recruits high school students with an innate gift for making and doing, even if these gifts are not reflected in their grades. Great emphasis is placed on qualities like ambition, playfulness, grit, and passion. Students who relentlessly pursue their projects and excel at hands-on learning are encouraged for nomination.

“We look for the kinds of people who think outside the box because they believe in something bigger,” Iyengar explained. “The application process for iSTEM is non-traditional. We look for a portfolio of things students have done rather than just what their SAT score was or how much they scored in math. It’s more about their initiative and drive.”

Stevens President Nariman Farvardin also sees immense value in this unique selection process. “I personally believe that we are born with certain genes that enable us to become incredible,” said Farvardin, which recalls how the woodpecker is born with the innate instinct to innovate. “Our idea in creating this program is to identify students with this DNA and harvest that talent and energy and point them in a direction that will enable them to change the world.”

“Admissions offices look at grades, SAT scores, and letters of recommendations. Some programs at Stevens are highly selective,” Farvardin continued. “But the kind of talent we are looking for in the [email protected] program cannot be easily measured by traditional standards.”

For most iSTEM students, nothing is obvious when Iyengar first meets them. “What is obvious is a sense of hunger,” Iyengar said. “They have a growing sense of dissatisfaction with life and with what society has them doing.”

Some iSTEM students may struggle to immediately identify their precise passion or project. For most students, the initial process is a conversation, or a series of conversations. Iyengar spends a lot of time with them, asking them precise and specific questions. What’s wrong with the world? What do you want to fix? Where do you see a need? What do you care about? What can you work on for the next ten years or longer?

“This part of the process is the hardest,” Iyengar explained. “It often takes months to find out what they think is wrong with the world.”

For some students, like Jocelyn Ragukonis, the answers don’t come quickly. In these situations, those answers are often uncovered in unexpected ways. After spending a lot of time without feeling any closer to helping Ragukonis find her path, Iyengar finally said, “Tell me something you’ve always done. What do you do when you’re sad?”

Ragukonis told him that when she was sad or angry, she watched video clips of babies on YouTube. Seeing cute, happy babies always set her mind at ease. Through continued discussion, Iyengar discovered that Ragukonis had also started babysitting her cousin’s infant and she had been observing different baby products. She told Iyengar that baby monitors were broken. When he pressed her to explain what she meant, Ragukonis told him, “They’re like bricks, and they don’t care about the baby.”

Eventually, Ragukonis developed Bira, the baby monitor that is obsessed with babies. Her goal was to create a baby monitor that actually understands that it is looking at a baby, because she believes that every baby deserves a guardian angel. The company makes video baby monitors equipped with advanced computer vision. The camera is constantly cognizant of the baby’s location in the bed as well as its activities, such as sleep duration and bathroom usage. It can even detect when the baby’s face is covered. Today, the working product—hardware and app—are available; a provisional patent application is drafted; and two working mothers are beta testing it.

For Hayden Daly and Frank Pinnola, their identification of what was wrong with the world was easier to identify. Daly was finding himself increasingly distressed by society’s reliance on smartphones. “Social media addiction kept me up at night,” he said. “People spend 4-6 hours a day on their phones. I wanted to get them off their phones doing cool things.”

Both Daly and Pinnola enjoy going out and exploring new places. Their passion for adventure led them to create Exire, whose company mission is to get people doing cool things, and their tagline? Making plans to go out should be as easy as “Netflix and chill.” The goal of the app is to remove the friction and indecision from going out. Exire is an AI-driven event planner that makes plans, purchases tickets, and sends an Uber to your front door so users can try fun, new things with ease. It is a fully functional product currently available on iOS. At this time, the venture makes three plans a week and is already generating revenue.

Though [email protected] was only established in July 2018, students and the companies they’ve created through its predecessor, [email protected], have already accomplished astonishing things, with enterprises valued at well over $36 million.

Part of the program’s focus is shaking off the erroneous notion of what success and failure really are.

“Good obedient students become good obedient employees—and the longer you’re trapped in that mindset, you’re not going to become a leader,” Iyengar said. “There’s more to learning than grades, and technology is such a powerful thing that the best thing you can do with it is enrich other people’s lives. That, in the end, is the most satisfying thing.”