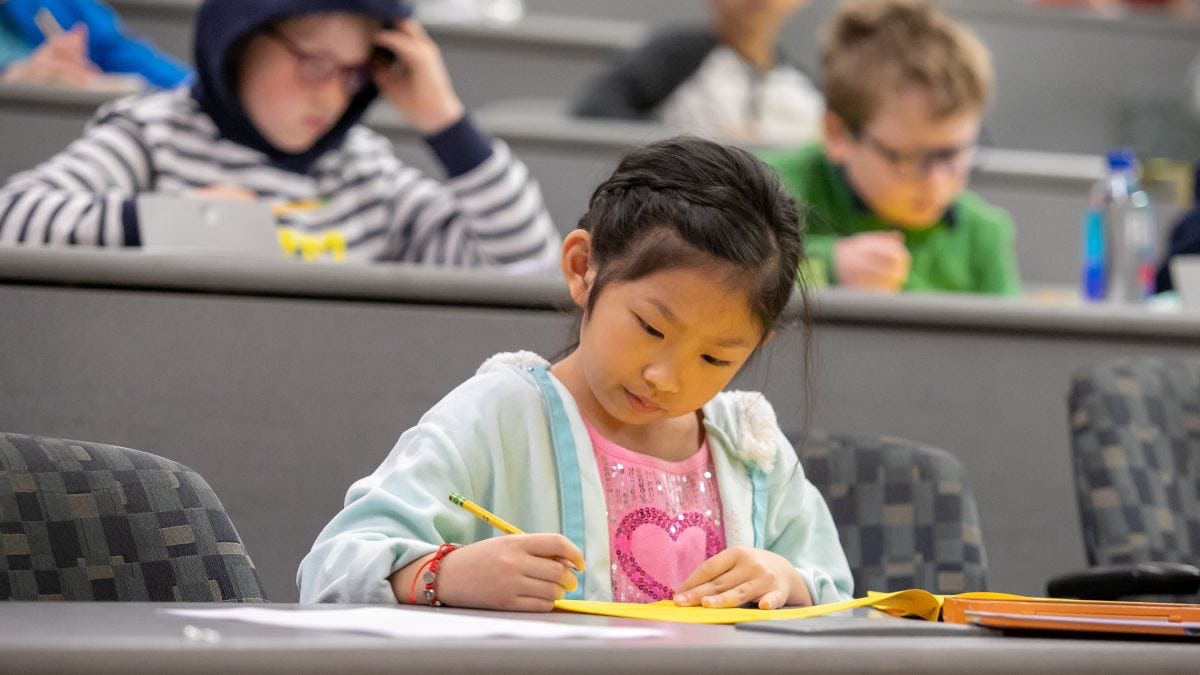 Several participants of the 2019 Stevens Math Olympiad focused on the exam.

Foreheads leaning on palms, fists resting on chins, and pencils, pens and fingers tapping away on desks – these were the motions of the eager young minds in deep thought solving challenging math problems at the Fourth Annual Stevens Math Olympiad. Through the Olympiad, held on the Stevens Institute of Technology campus in Hoboken, New Jersey, the university aims to stimulate enthusiasm for mathematics, introduce mathematical concepts to students, and provide a venue for mathematical intuition and creativity.

Open to students in grades 3-12, the event hosted a range of novice and experienced math competitors. Regardless of whether participants had attended a past Olympiad, a palpable sense of excitement was felt, even among the attending family members and school chaperones. Enthusiastic family members included John Overdeck, the keynote speaker, and his wife Laura. Their three children were among the more than 500 students welcomed to campus to compete in the Olympiad; a record registration.

"Since hosting the first Stevens Math Olympiad, the math department has tried to outdo itself each year, and this year was no exception. I'm very happy that we were able to share the joy of mathematics with a record number of students,” said teaching assistant professor and event co-organizer Jan Cannizzo. 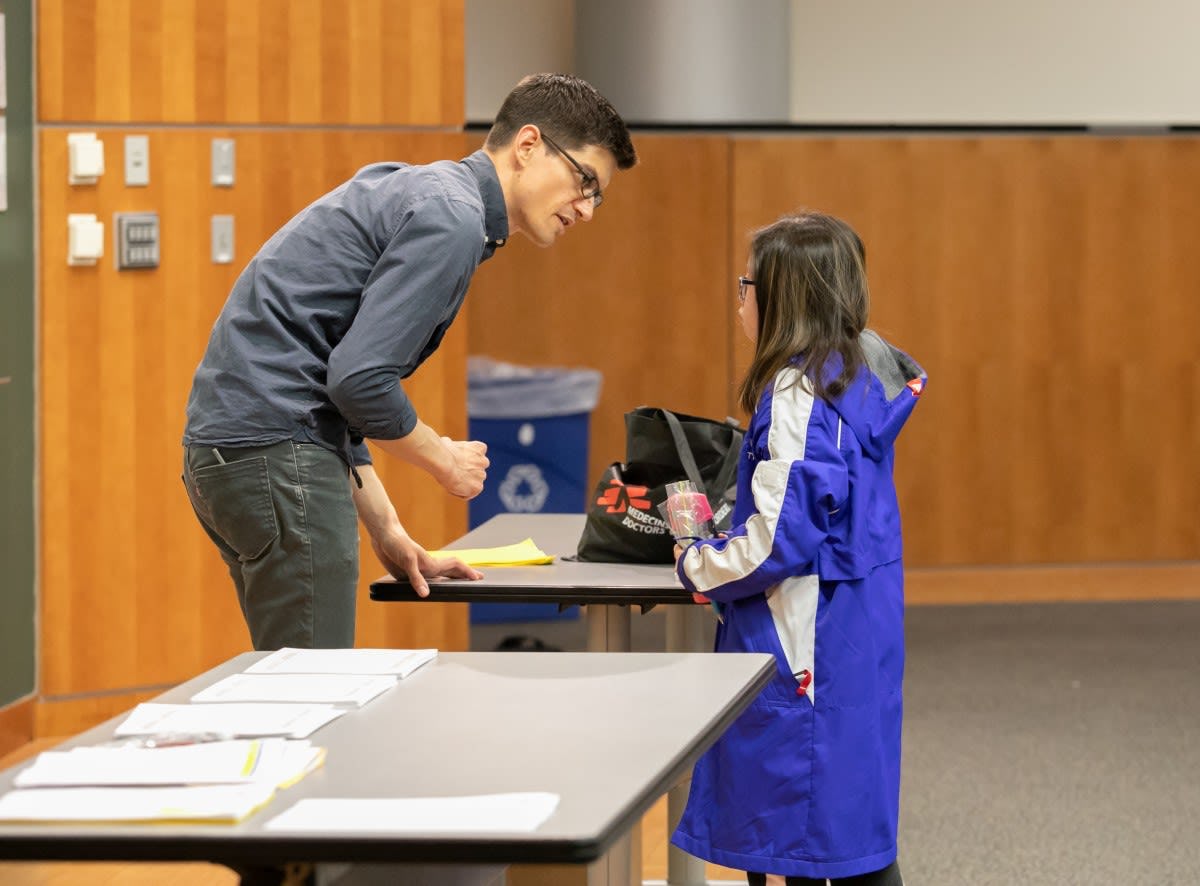 Outreach programs hosted by the Department of Mathematical Sciences, such as the Math Olympiad and math circles initiative, have attracted funding from the Mathematical Association of America and the Alfred P. Sloan Foundation.

Ahead of the competition, high school students, family members and school chaperones were invited to the welcome and opening remarks in the DeBaun Performing Arts Center. Presenters included Dr. Pavel Dubovski, Chair of the Math Olympiad Committee and teaching associate professor at Stevens, Dr. Nariman Farvardin, President of Stevens and Mr. John Overdeck, co-founder and co-chair of Two Sigma Investments, silver medalist for the U.S. in the 27th International Mathematical Olympiad and co-founder of the Overdeck Family Foundation, an organization that supports science, technology, engineering and mathematics education initiatives and research. 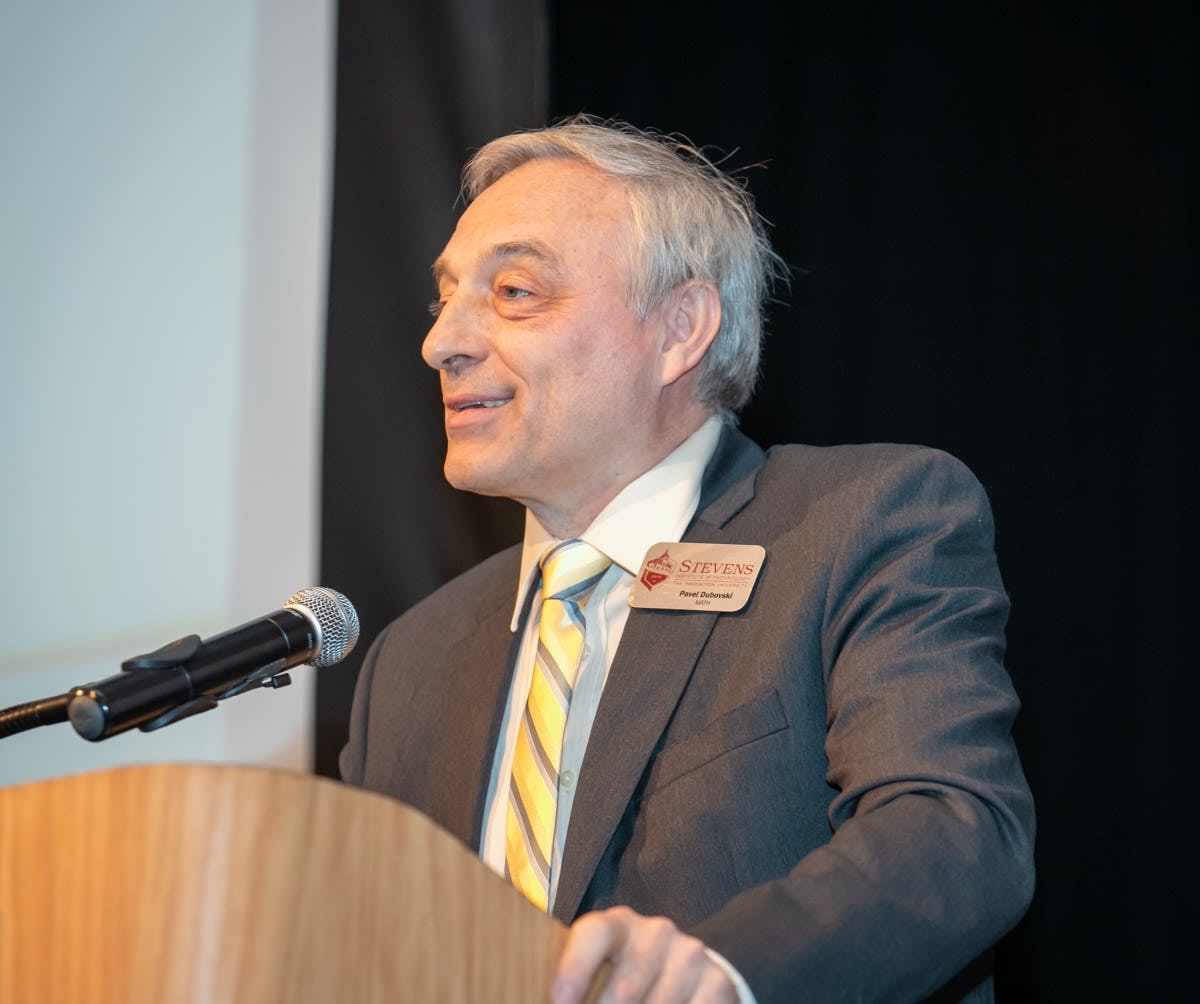 In his introductory speech, Dr. Dubovski explained that the fifteen question exam would prove challenging, with the difficulty level increasing from question one to question 15.

Participants agreed, as indicated in a follow-up survey.

“The questions were indeed difficult, and I was able to answer the algebra questions for my exam with strenuous work, but I had a great time,” said one of the students.

A fellow participant echoed this sentiment. “[The] Math Olympiad was extremely challenging and extremely fun at the same time. I loved attending this event and would love to do so again next year!”

"Competitions in mathematics such as the Math Olympiad give an opportunity to mathematically gifted and talented children to present their abilities," noted Dr. Darinka Dentcheva, the chair of the Department of Mathematics at Stevens. "There are no easy problems in the Olympiad, and the talent wins."

Throughout the competition, volunteers were available to guide the students' critical thinking and clarify challenging concepts. 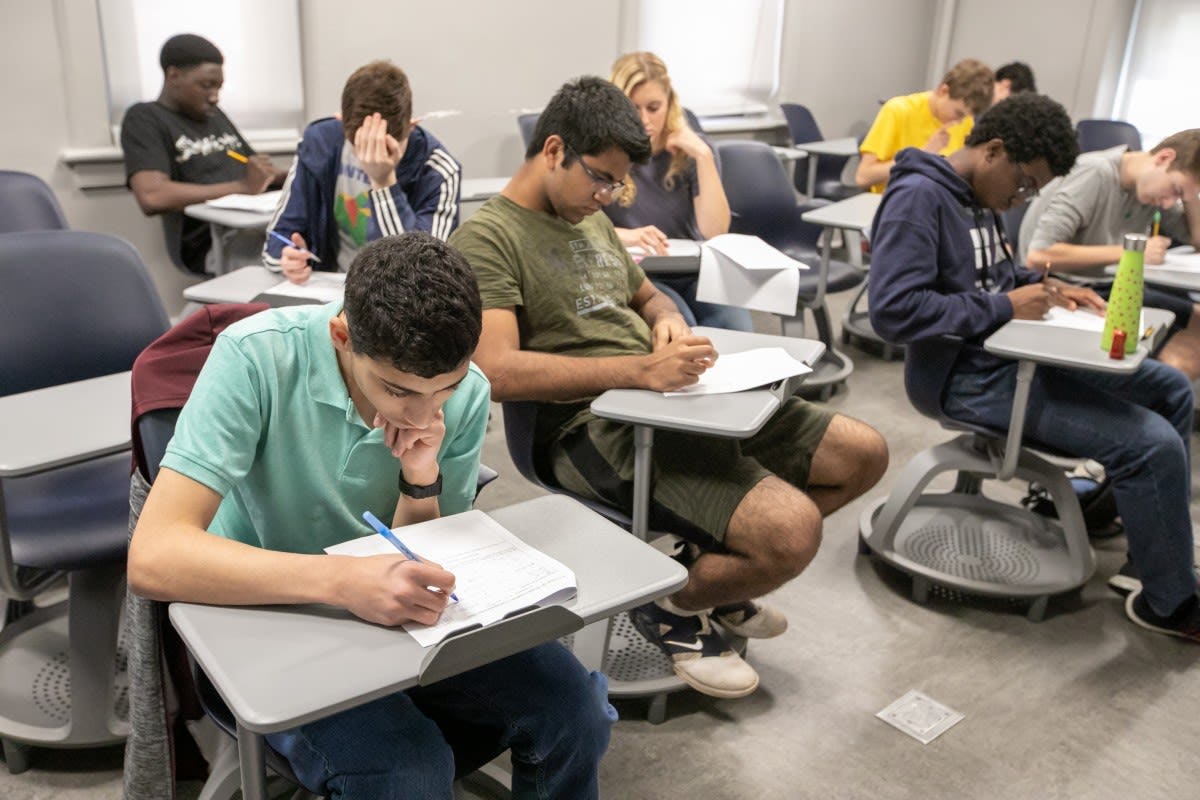 After completing the exam, students eagerly awaited their results. Students were notified of their scores at the end of May. While some may be discouraged by what appears to be a low score, Dubovski encourages students and parents alike to think differently, stating, "The Olympiad problems are intended to be challenging. Such problems [...] contribute to the spirit of a mathematics competition [...]. Students and parents should not be overly concerned about what may appear, at first glance, to be a low score: solving even a handful of problems is a result to be proud of."

Words not typically expressed in mathematical equations – “love” and “joy” – were recurring themes throughout the welcome and opening remarks of this year's Math Olympiad.

“For me, the joy of such competitions is the joy of teasing out treasures that have been hidden cleverly in the problems," said John Overdeck in his keynote address. 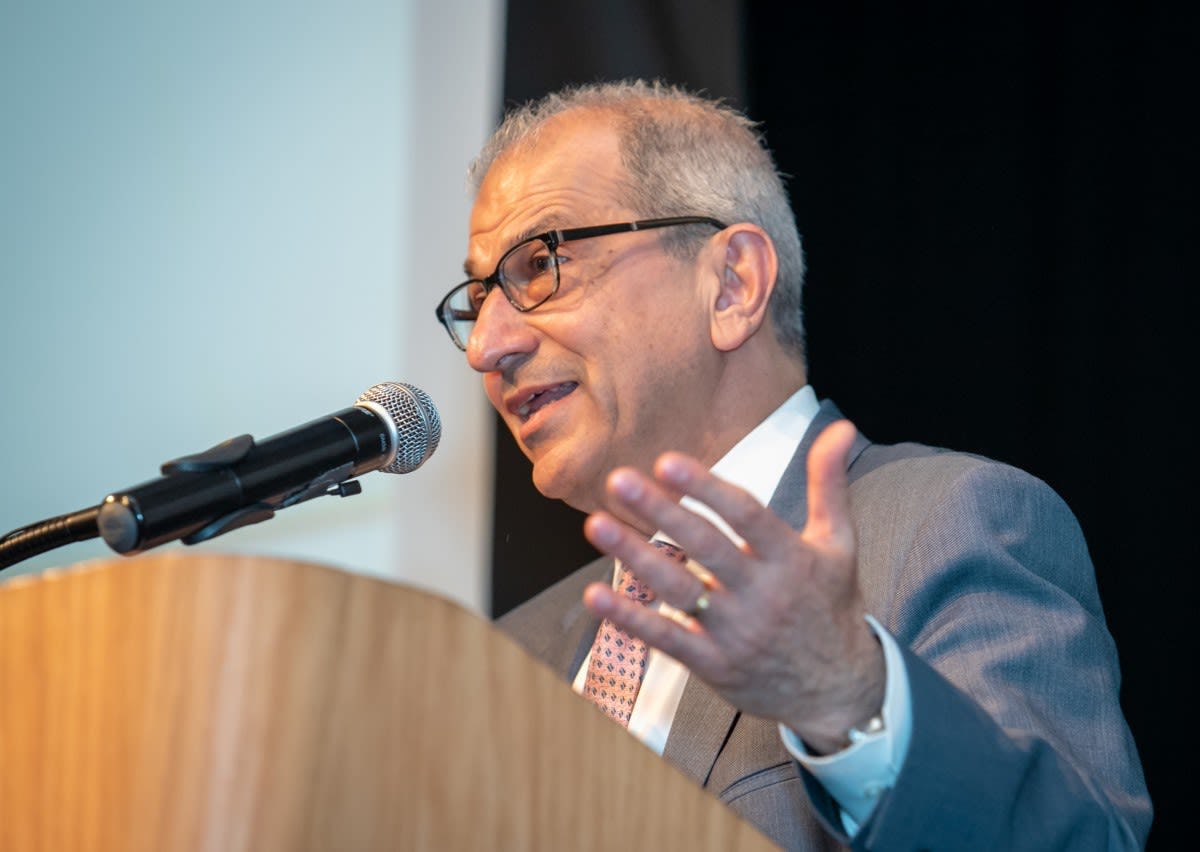 President Farvardin shared a brief history of where his love of math started and where it led him in his career. “I was 9 years old when I started as a math tutor. I was asked by my teacher to tutor a classmate who was actually struggling in math. At that time, I discovered my love for mathematics and also discovered my love for teaching,” he said.

Similarly, Overdeck’s mathematical intrigue started early in his life. He went on to describe the idleness of his childhood in Maryland, which lead him to pursue activities such as following sports statistics, playing solitaire and enjoying the local library. Overdeck credits these abstract pursuits to have guided his career path and invigorated his lifelong love of mathematics. 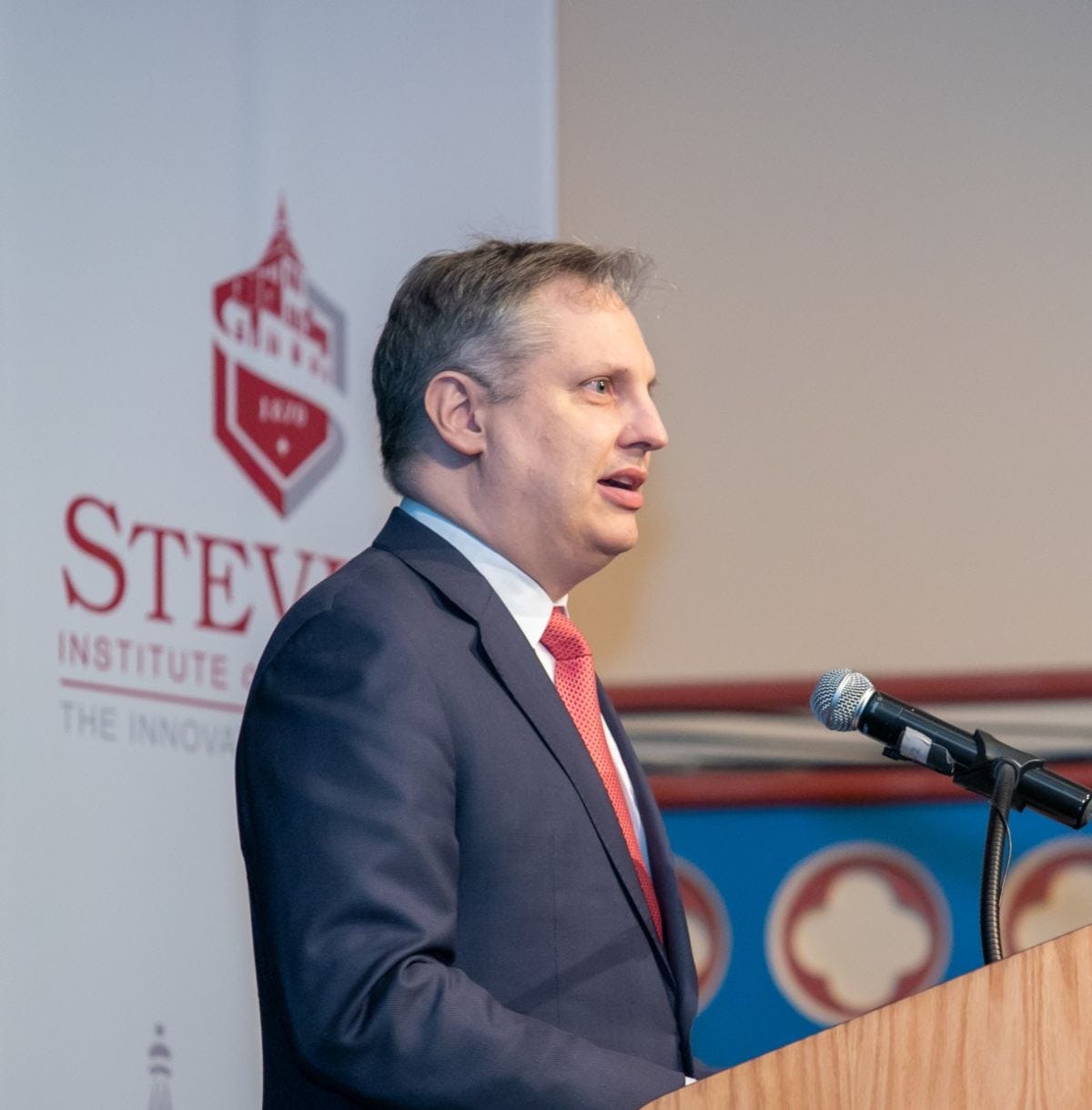 Overdeck is encouraged by the abundance of resources available today that can spark an early interest in mathematics. However, he notes these resources can also serve as a distraction, providing a sometimes overwhelming amount of information.

Overdeck relates this idea to food by stating, “Modern American life is filled with distractions compared to the spartan information diet that I grew up on; today's information world is all you can eat,” he said. “Much of it is totally empty calories, or at worst, even harmful. [...] In the end, more often than not, you are what you eat. Whatever you choose to pursue, [...] pick wisely what you put into your head because your choices will help color your future.”

In addition to providing encouragement to participants, Overdeck provided free tickets to the National Museum of Mathematics in New York.

Note: All images of participants are featured with their consent.