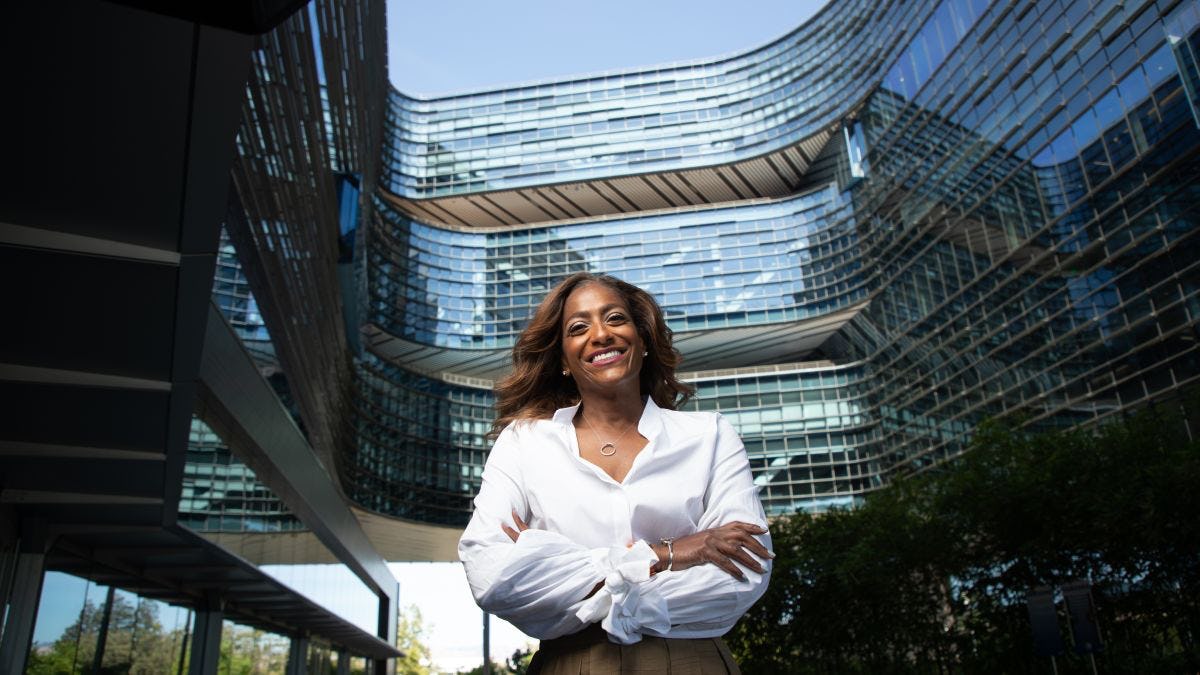 When she was last interviewed by The Stevens Indicator alumni magazine back in 2008, Air Force veteran Angie Hankins ’95 had just made partner with Stroock & Stroock & Lavan LLP, a prestigious New York law firm. The intellectual property attorney also made history then as that firm’s first African-American partner. Since then, Hankins has moved to Silicon Valley, where she’s now the General Counsel and Corporate Secretary of the Samsung Strategy and Innovation Center in Menlo Park, California. There, she leads the legal team for a group that is responsible for providing advice to the Chief Strategy Office, which is responsible for new business creation for Samsung and invests in and partners with emerging companies to discover and develop new technologies. Hankins, who now splits her time between Samsung offices in Menlo Park and New York City, recently reflected on her current work and how her time in the military and at Castle Point helped to lay the foundation for her success.

Q. What inspired you, a longtime New Yorker and New York-based attorney, to move to Silicon Valley and Samsung?

A. At Stroock, I was highly specialized and litigated many patent cases. But I only worked with clients when problems arose, and they were in crisis. The opportunity with Samsung was an amazing opportunity to be more strategic and less reactionary for the largest holder of patents worldwide and the No. 2 technology company in the world. I have the opportunity to see everything from inception, and I am involved with strategic transactions and investments, and evaluating companies; it’s something that I’ve always wanted to do. Samsung makes everything from TVs and smartphones to appliances. We even have a construction company and a biologics business. The breadth and scope of Samsung’s technology and products are unparalleled by any other tech company.

Q. What areas interest your group, and what new technology excites you?

A. We are looking into areas such as 5G, artificial intelligence, real world data applications, digital heath, genomics, data center technology and quantum computing. I’m very interested especially in AI. But I want to see AI for good, where someone is addressing some of the biases that can be inserted by use of AI technology.

Q. After high school, you joined the Air Force, serving four years as a communications computer system control technician and rising to the rank of sergeant and receiving a number of honors, including the John Levitow Award and Airman of the Year. How did this experience shape you?

A. My father, stepfather and three of my five brothers all served in the military. I was a good student, and the direction should have been college after high school. But no one in my family had gone to college and was familiar with the process. The military seemed like an opportunity to continue to learn and travel. I was interested in engineering and science, and so I selected a job, telecommunications specialist, that permitted me to continue to learn and grow. In the military from day one, you are forced to be disciplined and work as a team. I also was given the opportunity to lead as a squad leader in basic training. In technical school, the military process trains you how to think. After technical school, I was stationed at the Feldberg Radio Relay facility in Germany and was responsible for maintaining digital and analog lines. I was later at Offutt Air Force Base in Nebraska where I attended Non-Commissioned Officer School and graduated top of my class. I am a quiet introvert who does what she needs to do to get the job done, and being in the military helped me to develop my leadership skills and become more outspoken. Wanting to drive further and being ambitious — to take control and lead — I think it did come from that experience. And I don’t think that I would have received a full scholarship to Stevens from Bellcore (the former Bell Communications Research) if I hadn’t served in the military.

Q. What was your Stevens experience?

A. It made me feel like I could do anything with hard work. I found the place I belonged. I remember the people who helped me through the STEP program (Stevens Technical Enrichment Program), people like (STEP director) Deborah Berkley, math professors Varoujan Mazmanian and Larry Levine and others. I majored in electrical engineering and did relatively well, and when I had a problem, they were able to help me through it. There were teachers who were just really good. A big part of my time at Stevens was fencing for (longtime women’s fencing coach) Linda Vollkommer. She’s amazing; she made fencing more than just about competing, but about being a good person and athlete. Linda stays in touch with everyone who has fenced for her at Stevens. I consider her a very good lifelong friend. I think I was a very serious student; I was just super focused. I had lived abroad for almost three years, had been in the military and had a lot of responsibility. But going to Stevens taught me that if I applied myself to anything — and I really studied — I could do it. I think that a lot of the time, people (generally) think that things are supposed to happen through osmosis, and you’re supposed to know everything. But no one does.