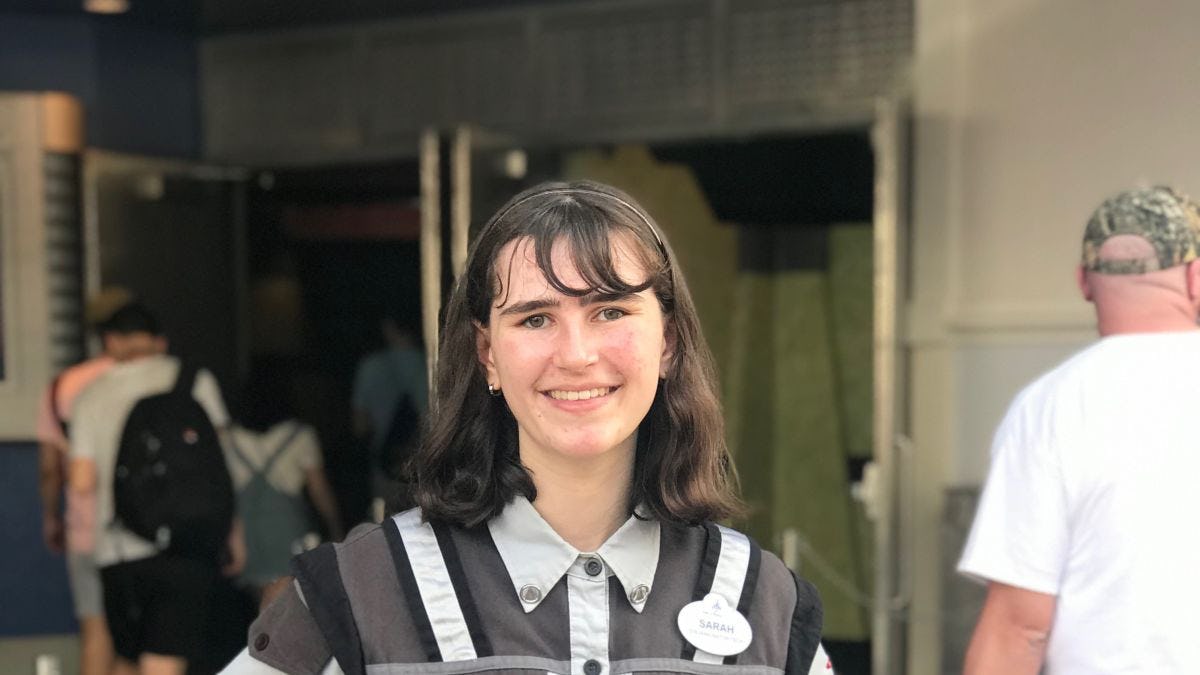 Sarah Bertussi in her role as a greeter at the Monsters, Inc. Laugh Floor, one of the attractions at the Walt Disney World Resort in Orlando, Florida

Sarah Bertussi ’21, a mechanical engineering major in her third year at Stevens Institute of Technology, is currently in the midst of a dream co-op at the Walt Disney World Resort in Orlando, Florida.

It’s an experience that Bertussi has been working toward since her first year at Stevens when she learned of the Disney College Program (DCP), an intensely competitive internship program that draws applicants from around the country.

Bertussi had overcome two unsuccessful attempts before getting past Disney’s extensive application process, and ultimately getting an offer to participate in the DCP, which she began in January.

On campus I regularly communicate with Dean of Students Ken Nilsen, who serves as advisor for the yearbook. When I told him I was interested in an internship at Disney, he immediately put me in touch with [Stevens alumna] Danielle DeFeo ’15 M.Eng. '15, a mechanical engineer in sustaining engineering at the Magic Kingdom.
sarah bertussi ’21, Editor-in-chief of The Link, Stevens’ undergraduate yearbook

She describes her early attempts as essential learning experiences in determining what Disney looks for in an applicant. Now, she is working in the Theaters Complex of Disney’s Tomorrowland Attractions, at the Monsters, Inc. Laugh Floor and Walt Disney’s Carousel of Progress in a variety of roles.

“Sometimes I’ll be a greeter, other times I’ll be in the theater holding the microphone when the monsters joke with the audience, and sometimes I’ll be delivering the welcoming spiel for Walt Disney’s Carousel of Progress.”

As someone who has experienced Disney’s attractions numerous times growing up, Bertussi knows firsthand the indelible impression the famous resort can have on a child. Now that she is on the other side of the visitor experience, she says the most rewarding aspect of her DCP experience is seeing the wonderment on the faces of young Guests.

“When you get to interact with the Guests, especially the little kids, it really seeps in that you’re helping to create these incredibly memorable experiences for a family.”

While Bertussi doesn’t see as much of the engineering aspect of Disney that relates to her mechanical engineering major, she says the DCP offers participants career development classes that match their interests, including one for STEM careers and another for engineering at Disney. They’re invitation-only, to ensure that the appropriate majors are getting to attend these sessions, and feature speakers who share their career journeys at Disney.

“More often than not, the speakers themselves got their first start at Disney through the DCP. We get advice, such as how to do 'meet and greets' with professionals at Disney who are working in the field that you’re interested in. These one-on-one meetings can yield personalized career advice, such as what kinds of connections you should be making; what internships you should be looking into; and how to make sure you are ready for that role when the internships come out.”

“I want to help instill that passion in young girls so that they don’t feel intimidated or discouraged from pursuing a STEM program or career.”

Before she was accepted into the DCP, Bertussi had considered applying for Disney’s professional internship program, but is happy about how things worked out, she says.

“I’m really developing an understanding of how Disney’s operation works and what their priorities are, and that understanding is important to have before starting a professional internship,” she said.

Additionally, she says her current experience will inform how she approaches her major when she returns to Stevens this fall.

“If I am fortunate enough to get a professional internship at Disney, I’ll know what they’re looking for in their engineering.”

Before she was accepted into the DCP, Bertussi made a valuable Disney connection through her role as editor-in-chief for The Link, Stevens’ undergraduate yearbook.

“On campus I regularly communicate with Dean of Students Ken Nilsen, who serves as advisor for the yearbook. When I told him I was interested in an internship at Disney, he immediately put me in touch with Danielle DeFeo ’15 M.Eng. '15, a mechanical engineer in sustaining engineering at the Magic Kingdom,” she recalled.

“I was emailing with Danielle periodically leading up to my arrival in Orlando, and after I got down here and settled into my work schedule, I did a meet- and- greet with her. I was able to see where she worked and the kinds of projects she works on. She continues to be a very important contact for me.”

Inspiring the next generation

Bertussi’s early fascination with Disney is one of the things that inspired her to go into engineering.

It was after watching a documentary on the creation of Soarin', a flight motion simulator attraction at Disney’s EPCOT, that she first became aware of the concept of engineering, she revealed.

And when she was in the 11th grade, she built a Rube Goldberg machine with the help of her grandfather.

“The one that I built had mechanical, electrical, chemical, visible light and thermal components to it. And my grandfather worked with me a lot, teaching me about the electrical wiring aspect, such as the normally-open versus normally-closed switches, and helping me figure out the energy transfers. Up until college, that was the hardest engineering thing I had done.”

That early exposure to hands-on engineering projects is what drives Bertussi’s involvement with the Society of Women Engineers (SWE) section at Stevens, where she serves as co-chair for K-12 outreach. SWE organizes an outreach event on campus known as Stevens STARTS (Stimulate, Teach and Reveal Technology and Science) that is open to young girls and boys. The next STARTS will be held Sunday, April 7, 2019.

Early engagement in STEM is critical for girls in order to develop confidence, she says.

“I was usually the only girl in class, but that didn’t affect me because I was doing something that I really loved. I want to help instill that passion in young girls so that they don’t feel intimidated or discouraged from pursuing a STEM program or career.”