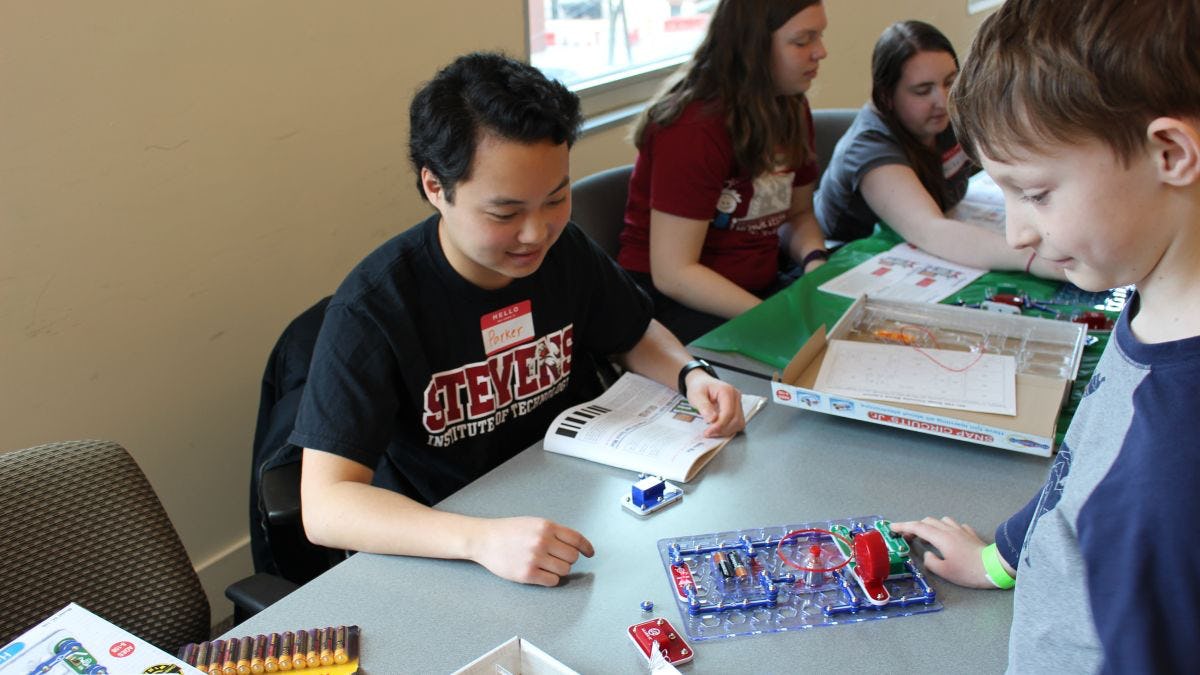 A volunteer from Alpha Phi Omega (APO) demonstrates parallel and series circuits to a visiting student.

The Society of Women Engineers (SWE) at Stevens Institute of Technology was recognized by the national organization with a Wow! Innovation Challenge award for its K-12 STEM outreach efforts. The award, which comes with a $1000 outreach stipend, recognizes the “innovative outreach techniques” used by the Stevens section to impact and connect girls to an engineering or STEM career path. 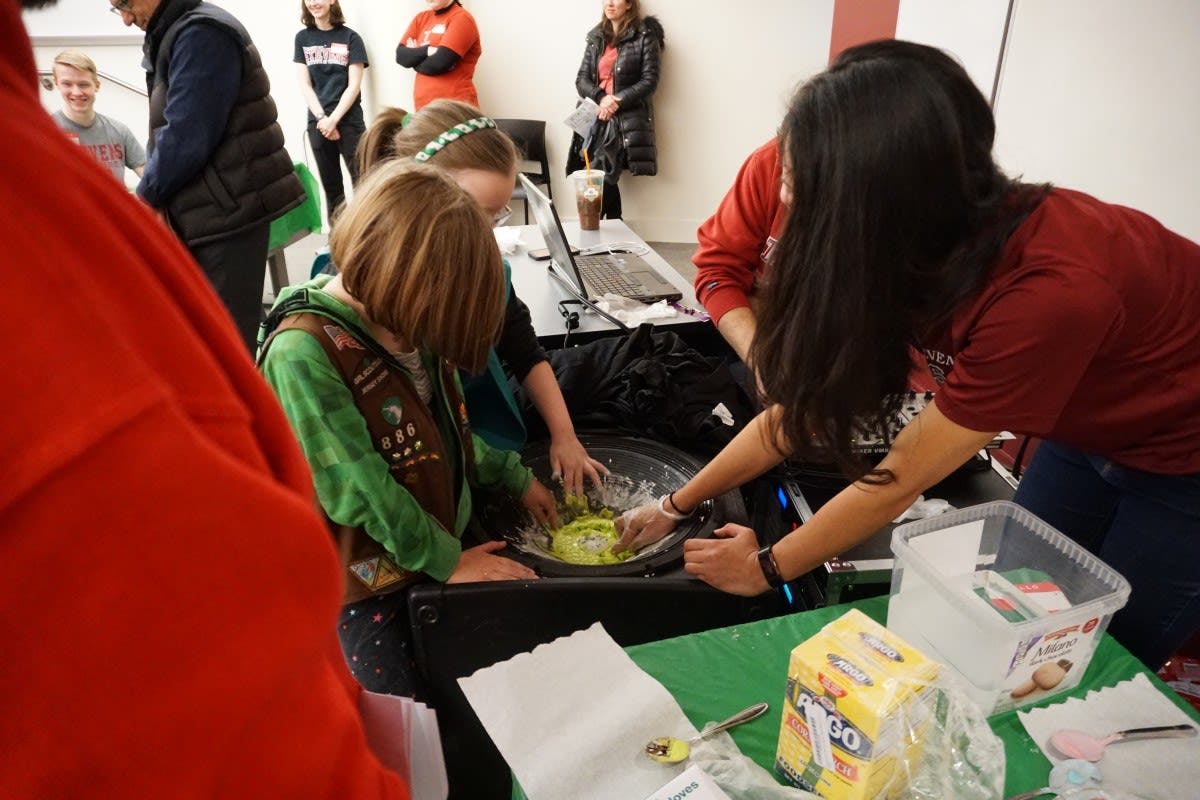 Using Oobleck and a speaker, a member from the American Institute of Chemical Engineers (AIChE) and Omega Chi Epsilon shows how Non-Newtonian fluids react to sound..

The event brought together 25 student organizations representing a variety of interests ranging from professional development and Greek life to media groups and honor societies, as well as two Hoboken community organizations. Each organization hosted a table and engaged visiting children with a hands-on learning activity that ranged from a DNA extraction to a coding game to an electronic demonstration using Snap Circuits.

The event was open to girls and boys, who ranged from first to eighth graders, and drew more than 100 children and their families to Stevens’ campus to learn about STEM.

“We really wanted to show that anyone, regardless of race or gender, could become part of STEM education and careers and have a lot of fun doing it,” said Bertussi. 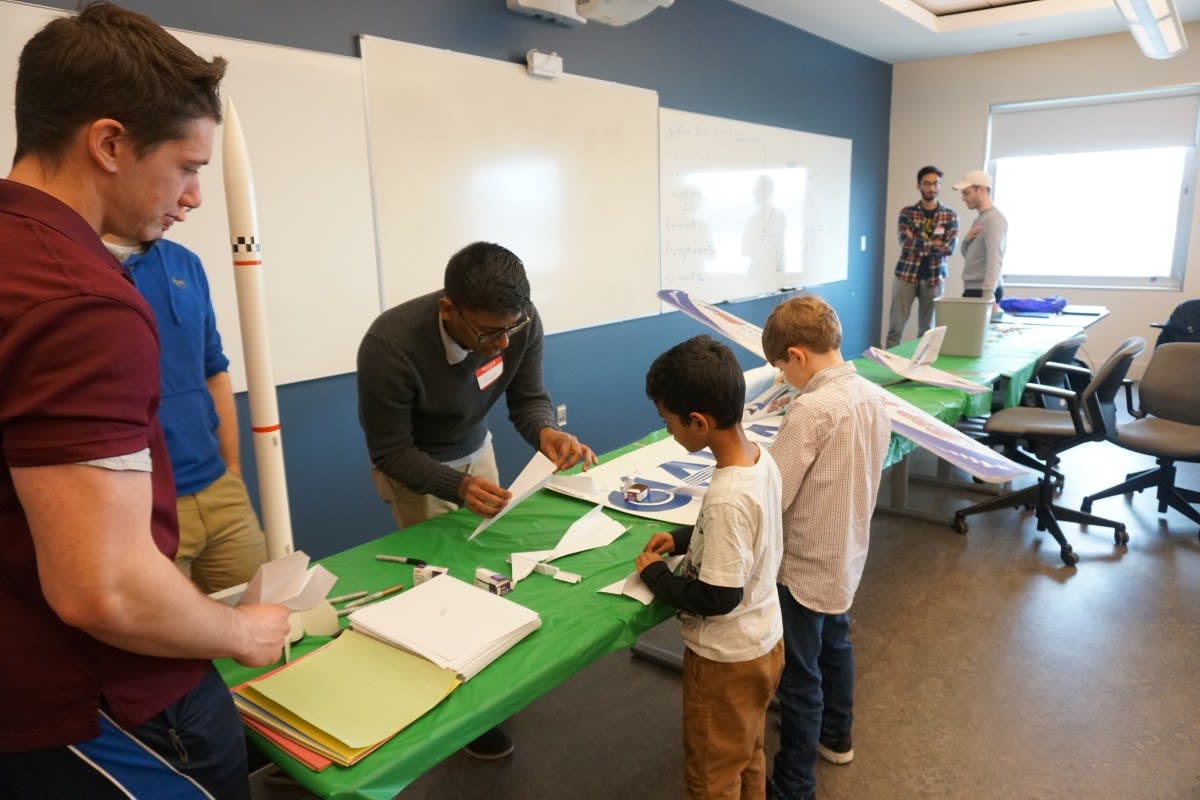 The American Institute of Aeronautics and Astronautics (AIAA) demonstrates how airplanes are able to fly and help students construct paper airplanes.

She and Sneddon reached out to their group’s extensive network of Girl Scout troops in the region to get the word out about STARTS, and partnered with Alpha Phi Omega service fraternity, which reached out to its own network of Boy Scouts and local schools.

For Bertussi and Sneddon, the motivation behind their K-12 outreach efforts is rooted in their own childhood experiences and how they were inspired to pursue engineering.

With a mechanical engineer as a father, Sneddon says she was always encouraged to build things and figure out how things worked.

“I did a lot of projects around the house with him and that really opened my eyes to engineering.”

Knowing that not every child grows up in a household with a family member who is an engineer or scientist, Sneddon says she wants other kids to have the same kind of early engagement with technology and science that she had when she was a child. 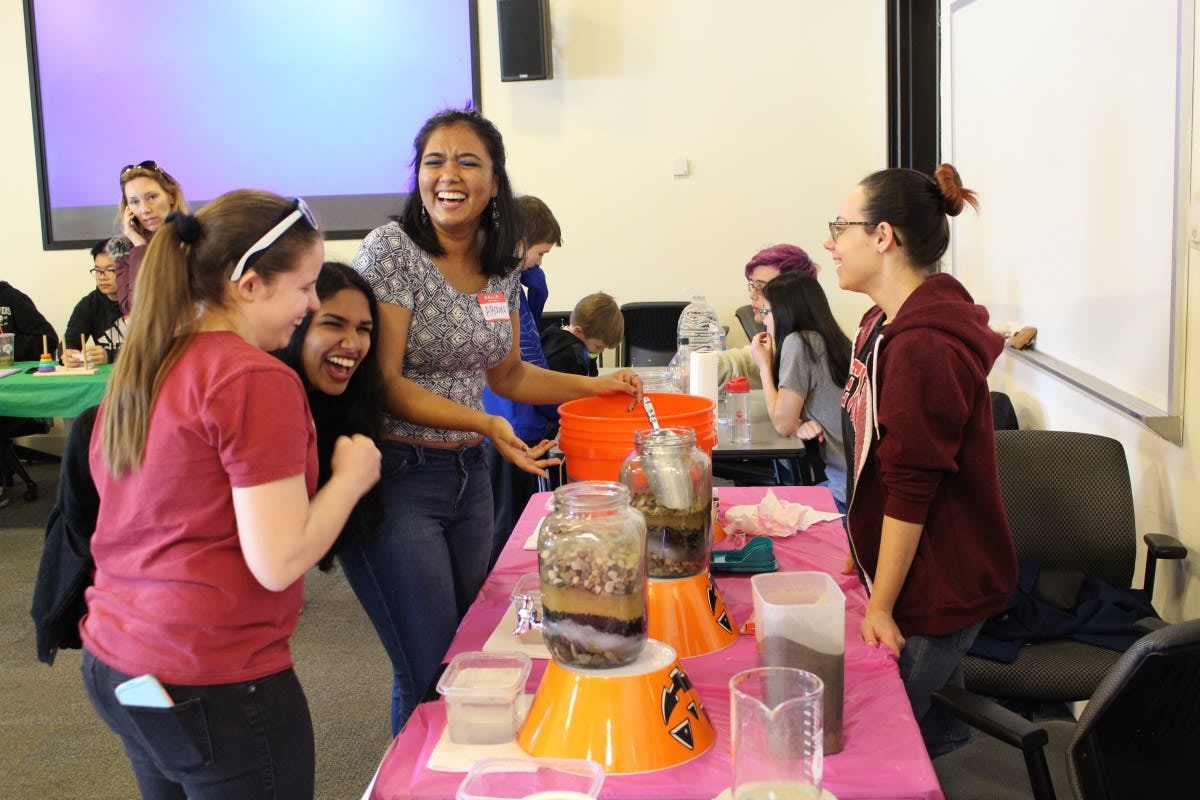 Members of the American Association of Environmental Engineers and Scientists (AAEES) prepare their DIY Water Filtration system with rocks, sand, and other common materials.

“It was really rewarding to witness how they would watch a demonstration. You can see the gears turning in their heads as they begin to understand what they’re watching and make connections. It shows that our outreach efforts are having an impact on them.”

Recalling her own experience when she was growing up, Bertussi says early exposure to STEM activities is especially critical for young girls because they absorb gender stereotypes from an early age.

“One Christmas my parents gave me a LEGO set, and when I opened it I was confused because I thought it was a boy toy, not a girl toy.”

Bertussi says she first became aware of the concept of engineering after watching a documentary on the creation of Soarin', a flight motion simulator attraction at Disney’s EPCOT. 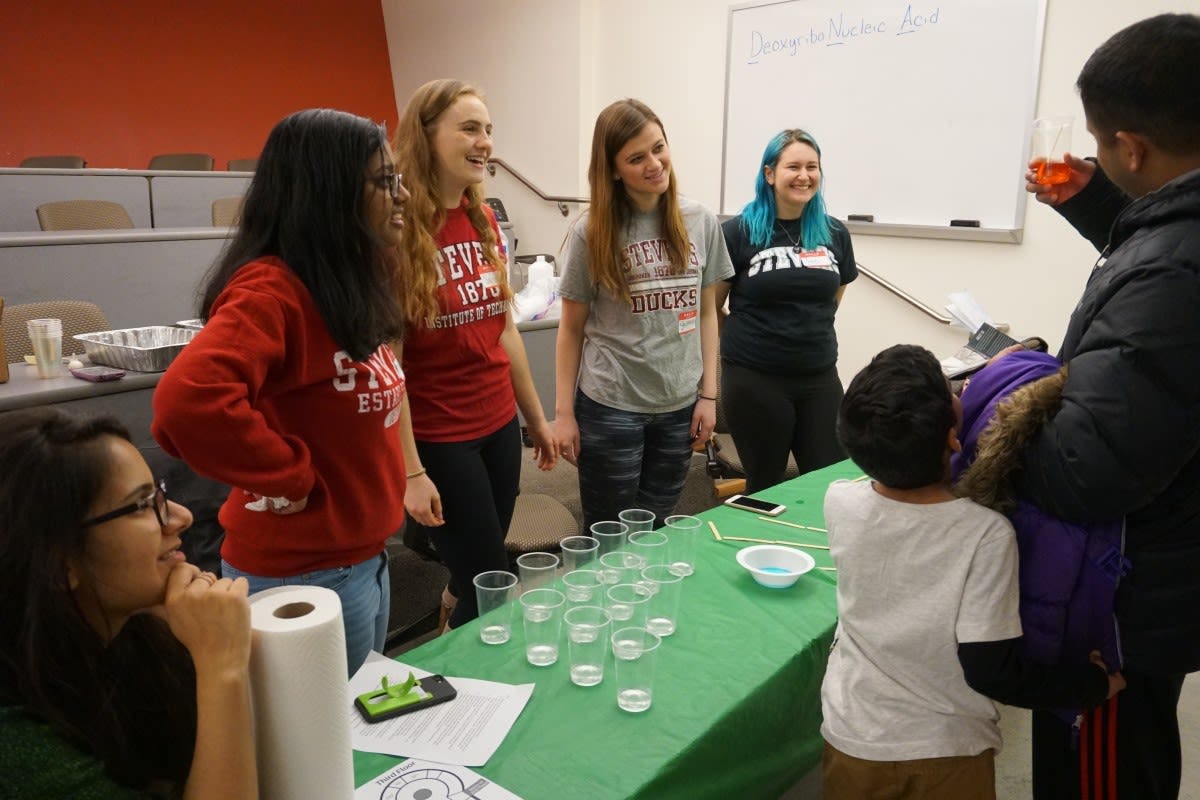 Members of the Society of Women Engineers (SWE) teach students about genetics and help them extract and view a sample of their own DNA.

“The engineers at Disney were trying to come up with a way to make the ride safe for people while providing a quick loading and unloading system. They were having a difficult time doing this until one of the engineers, on a day off, figured it out. Using an old Erector Set, he built a model of the now existing ride structure. Hearing that story and seeing the model in the documentary made me really excited, and I wanted to build something and make it work.”

As she prepares for her own future as an engineer, Bertussi is passionate about influencing the next generation of innovators and problem solvers.

“I was walking by some parents in the hallway and asked them how it was going and their son had run ahead of them. He had come from the paper airplane demo and he turned around and shouted out, ‘It’s awesome!’”

The next STARTS will be held Sunday, April 7, 2019. For information about future events, visit the Society of Women Engineers at Stevens.