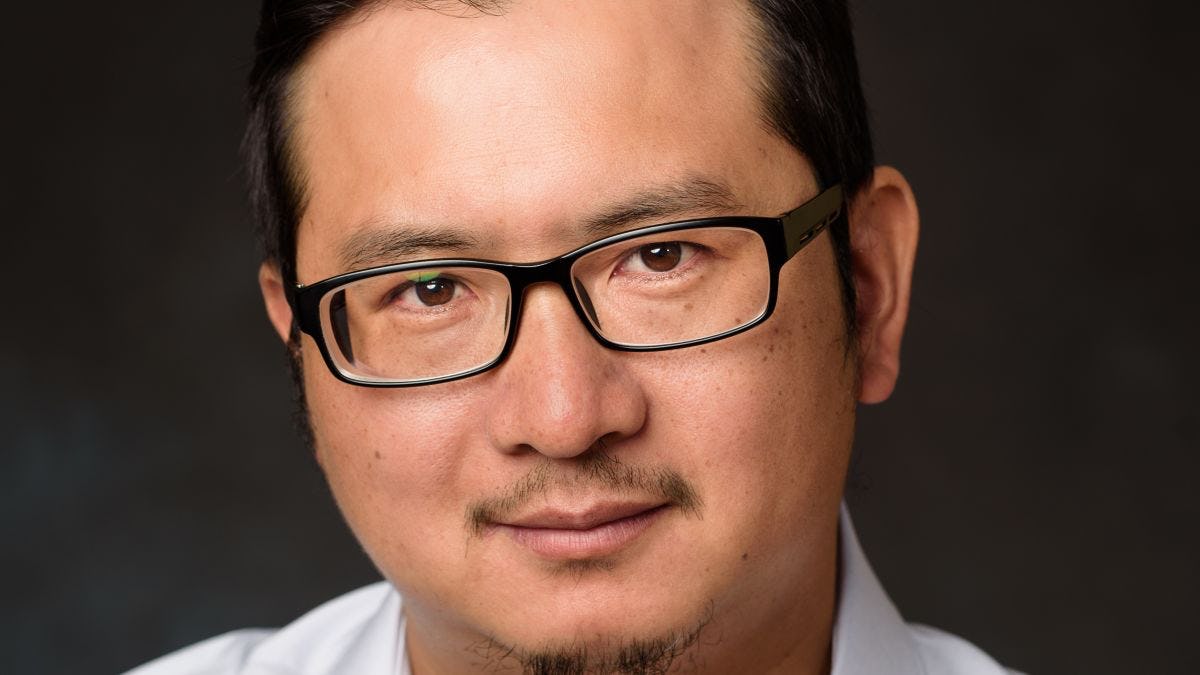 “Curiouser and curiouser”—it’s how Alice in Wonderland described her unprecedented experience of watching the world seem to grow tiny around her as she suddenly grew immensely taller. It’s also how Yuping Huang, Gallagher associate professor of physics and director of the Center for Quantum Science and Engineering at Stevens Institute of Technology, might describe his unprecedented research into fundamental light particles to develop advanced quantum technology and systems with immensely practical benefits.

“I’ve always had a lot of scientific curiosity,” says Huang, who grew up on his family’s small farm in southern China, raising rice, vegetables, and ducks, before earning his science degree from the University of Science and Technology of China and his Ph.D. in quantum optics, atomic physics, and atom optics from Michigan State University. “I started out studying theoretical physics, and then I began to question myself. There is so much that’s interesting in physics, that each small branch could easily take a lifetime to study. Unfortunately, I don’t have unlimited lives—I only have one. But I’ve realized that nature does not care how we interpret it—nature cares about what can be done.”

That insight inspired Huang to focus his research on experimental optics.

“My goal is always to benefit not just my family and myself, but thousands or millions of people,” he says. “With that in mind, I decided to look into what I could do, not just to satisfy my own curiosity, but also to make something useful. Right now, I’m using photons as quantum information carriers, with a focus on mass-producible, highly integrated, turnkey, and room-temperature quantum devices using photons. If we can make a breakthrough, we can create devices and other assistance to address imminent challenges and help a lot of people with computing, networks, cybersecurity, remote sensing, machine learning, big data processing, and more.”

To that end, since joining Stevens in 2014, Huang has launched first a quantum lab for his own research, then a quantum research club for interdisciplinary projects.

The broader, interdisciplinary Center for Quantum Science and Engineering (CQSE) brings together experts in diverse technical specialties to research, develop, and industrialize their quantum engineering projects. Dozens of faculty members, postdoctoral researchers, and students collaborate at CQSE to create photonic technologies with practical applications in fields such as big data analytics, defense, healthcare, environmental assessment, communications, and artificial intelligence. Millions of dollars in support from organizations including the National Science Foundation, Army, and Office of Naval Research both funds and validates this work.

<p.“Stevens has a century-long legacy of innovative engineering, and was one of the first in the U.S. to offer engineering education and research,” Huang notes. “We have seen great advancements through the school’s work in mechanical engineering. Now that we’re well into the 21st century, I believe that what will change our world again will be finding smart engineering tricks to implement quantum technologies. It’s really big, but it’s also really difficult, and it could never be done by a single principal investigator or a single field. We need to bring together a wide spectrum of expert participants. Many don’t know about quantum physics, and that’s fine. There are lots of things quantum physicists don’t know either! What we need is to bring everybody onto the same table and see what we can do as highly interdisciplinary team.”

Huang and his fellow researchers are delivering both quality and quantity in their quantum studies. Here are just some of the innovations they’re bringing to life for the greater good.

Huang’s photon-based studies span countless arenas, but his goal remains laser-focused on making the potentially life-changing benefits of quantum engineering available and affordable for everyone.

“People who don’t study quantum physics should still be able to access and operate quantum devices,” Huang says. “Through my research at Stevens, I’m excited about working with people from different fields, learning their language, understanding the most important challenges they are facing, and joining together to come up with those solutions. It’s always about addressing issues from a new and elegant angle to help people, and through that process, I am grateful that I also get to keep learning a lot of new things.”