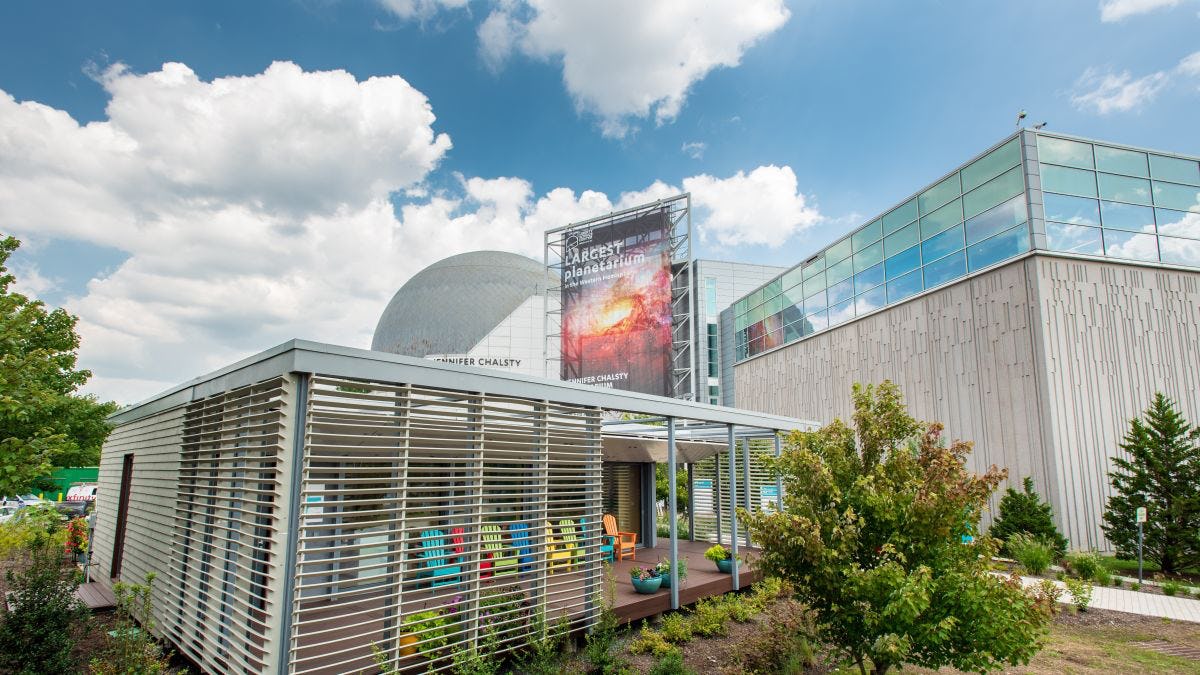 It crossed the country twice — East Coast to West Coast and back — and has been built and rebuilt, incredibly, three times. Now the award-winning solar house designed and constructed by Stevens students to resist future hurricanes is back home in the Garden State to stay.

And SU+RE House, which captured first place in the U.S. Department of Energy’s international Solar Decathlon competition in 2015, has settled where some 750,000 visitors per year will be able to learn about its clean-energy systems and storm-resilient construction: at Liberty Science Center (LSC), in Jersey City, New Jersey, where it has become a permanent exhibition.

The sand-colored beach house stands prominently near the science center’s main entrance. Inspired in the aftermath of Superstorm Sandy to build a home that was both energy efficient and resilient to hurricane-force winds and flooding, a team of undergraduate and graduate students designed and built the house on the Hoboken waterfront. SU+RE House traveled to Irvine, California, for the Solar Decathlon, then traveled back east; it was unveiled in its new home this past spring.

“Having it back is like a dream come true for me, especially for those of us who spent two years of our lives, every day, on this house and really believe in what it stands for,” says team member Chris Hamm M.Eng. ’16.

“To be an exhibit that can educate hundreds of people every month and actually educate kids; I can’t think of a more perfect final home for it. The fact that a place like Liberty Science Center wants a high-performance building like this sends an incredible message to the world — to designers, to builders — that this is something people need to know about and invest in.”

“I think that all Solar Decathlon houses function best as building exhibitions. It’s really designed to demonstrate ideas to large groups of people,” says Ed May, faculty project manager for SU+RE House. "And to actually be able to present its innovative ideas, “that’s the hope — to show that these things are always possible,” May says.

This is, indeed, a working home, and Stevens professor John Nastasi, faculty lead on SU+RE House, said that the house is now “doing its job” — producing electricity from the sun with its solar-powered shutters and roof, monitoring its energy use, showcasing its storm resilient features. 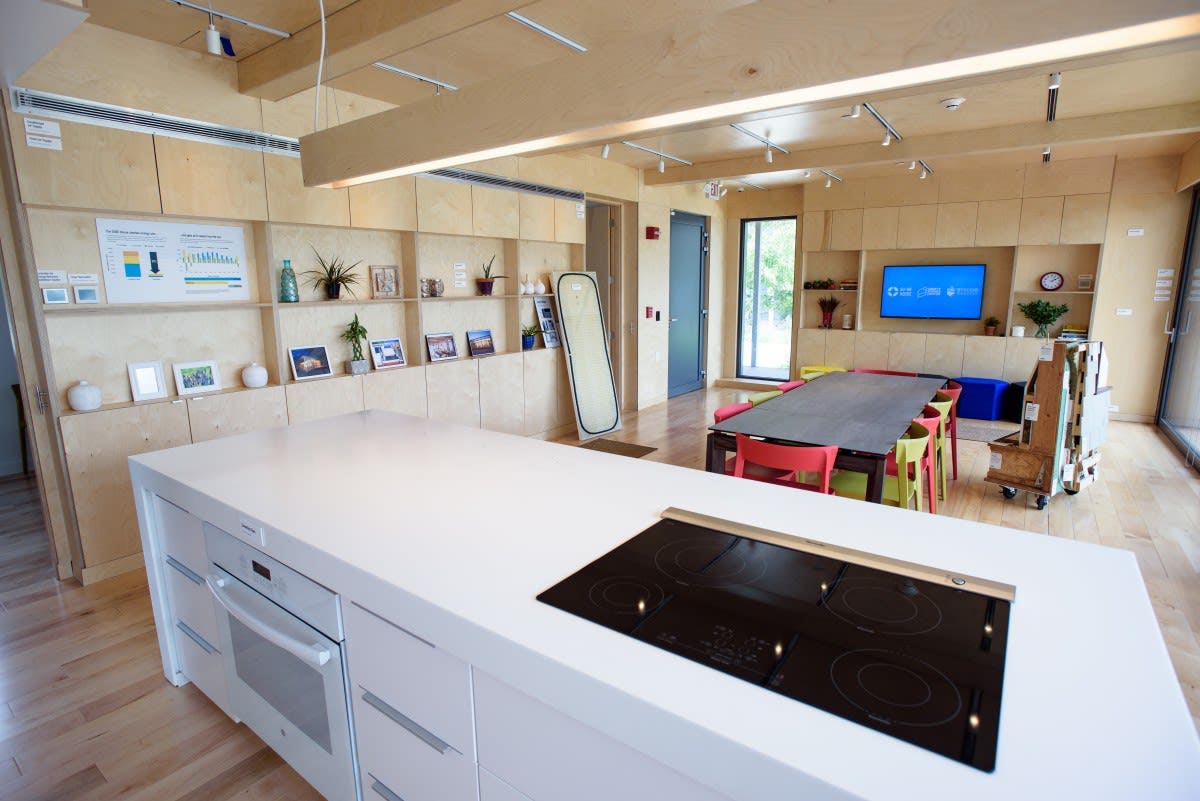 The solar-powered house is both energy efficient and built to withstand hurricane-force winds and flooding.

LSC, which calls SU+RE House a home “designed to survive and even help improve the future,” is thrilled to showcase the ingenuity of Stevens students, says Paul Hoffman, the science center’s president and CEO.

“As an educational institution, we have a responsibility to illuminate the science behind the most pressing issues confronting the world in which we live,” Hoffman says. “For example, we sit yards from a shoreline that was severely impacted by Hurricane Sandy, and is now more than ever being consistently affected by our rapidly changing weather patterns. By putting the award-winning SU+RE House front and center, we are educating the public about the dangers of climate change, and, as a result, spurring the necessary action to protect our environment.”

It’s been a long road home to New Jersey, as SU+RE House sat in storage in California until a $75,000 gift from PSEG — a major donor to the house’s construction — allowed the house to be trucked back to New Jersey.

Alex Guimaraes M.Eng. ’16, now a licensed architect with Nastasi Architects (Professor Nastasi’s Hoboken-based firm), was a SU+RE House student project manager and served as project manager for the construction at the science center.

LSC’s thin soil — workers needed to drive pilings some 30 feet into the ground — the harsh winter and a long approval process were all challenges, but well worth it in the end.

“It was amazing to see something that you built as a student being used in a positive way,” Guimaraes says. A number of alumni from the original SU+RE House team donated time to help reconstruct the house, and several trained LSC staff to give house tours.

The result is an energy-efficient, resilient and attractive home with an airy living space, working kitchen and bathroom and inviting deck area, with shrubbery and marsh grasses native to the area.

The house, of course, is being monitored for its energy use and efficiency — as well as how it will stand up to the next storm.

“We’re always learning a lot more about how these buildings perform, and it’s important to keep up with them and see how they do and learn from them,” May says. The exhibit will evolve over time and recently added a new component — using its stored electricity from the sun to create a house battery for SU+RE House.

The home has also served as a nexus for new ideas about renewable energy, as well. NJ Passive House — among a network of organizations that advocate an international energy efficient construction concept — held its inaugural meeting at SU+RE House this spring, and AIA Newark and Suburban Architects members took tours this summer. Nastasi and his team published a book based on the project.

SU+RE House’s former team members speak of the inspiration that the project has had on their lives and careers, and a number have gone on to work in solar energy, passive house design and other sustainable practices.

Similar to his role with SU+RE House, Hamm now does energy modeling for Passive House certification across the northeast with Steven Winter Associates in New York. His projects range from multi-family and affordable housing to commercial and apartment buildings. 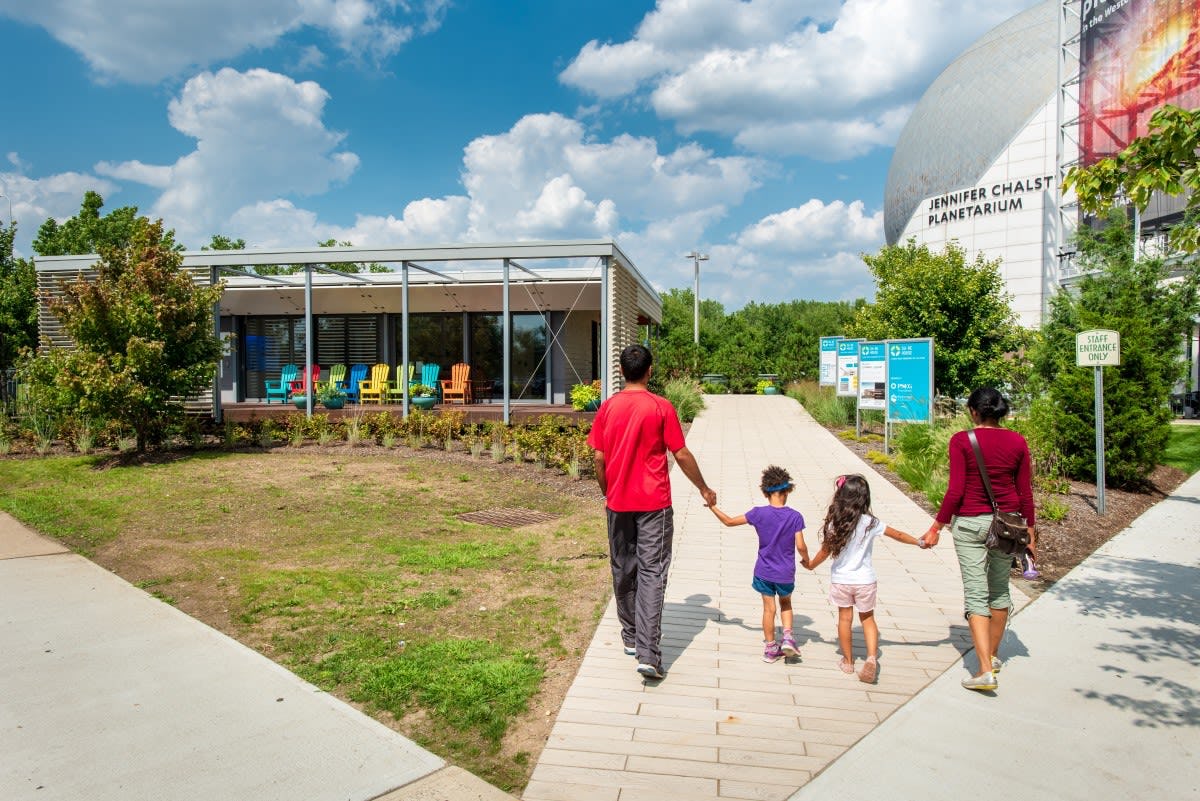 “I think the innovative work of SU+RE House has inspired me to create change and progress in my field and in my work,” he says.

“Working on SU+RE House helped me realize I needed to change the direction of my career,” says Elizabeth Lamb ’15, who now works with Whitlock Community Farm, an environmentally sustainable urban farm in Baltimore. “It helped me to refocus on the environment and a sustainable green lifestyle, in a way that truly excites me.”

SU+RE House tours are held on weekends; sign up at the LSC Welcome Desk on the day of your visit. For pre-arranged group tours for 10 or more people, call 201-253-1310.