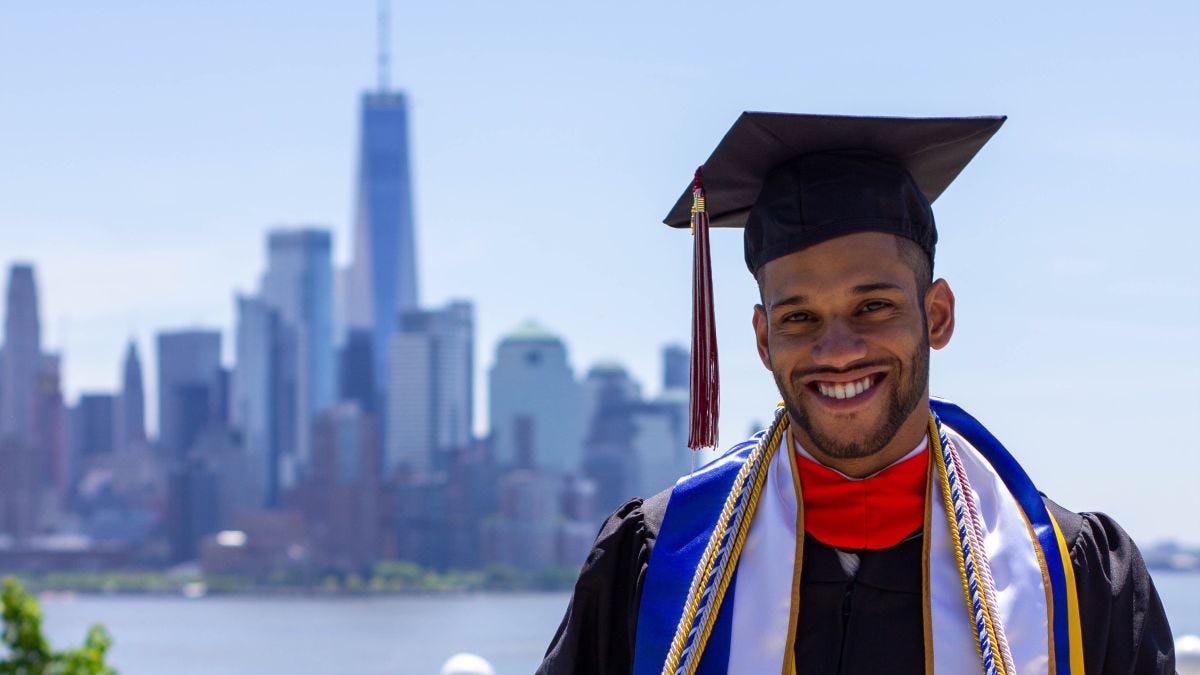 One look at the Manhattan skyline from Stevens’ waterfront campus on the Hudson River, Jose Angeles-Ovalles ’19 made up his mind.

“When I saw the city, it all made sense. Going to college at an institution like Stevens with its co-op program, in this location, I knew I would be really close to all kinds of employment opportunities.”

That realization came to Angeles five years ago during Admitted Students Weekend at Stevens when he was a high school senior from Dover, New Jersey pondering which college would bring him closer to his career goals.

The opportunities he imagined then followed in the form of co-ops and internships, building toward a full-time, post-graduate position at EY as a member of the auditing firm’s IT advisory team.

Along the way, he found his place in the Stevens community, formed meaningful friendships and realized a family dream.

Working toward his future one co-op at a time

Being the first in his family to attend college, Angeles’ graduation from Stevens this past May was the culmination of a family journey that began in Puerto Rico. 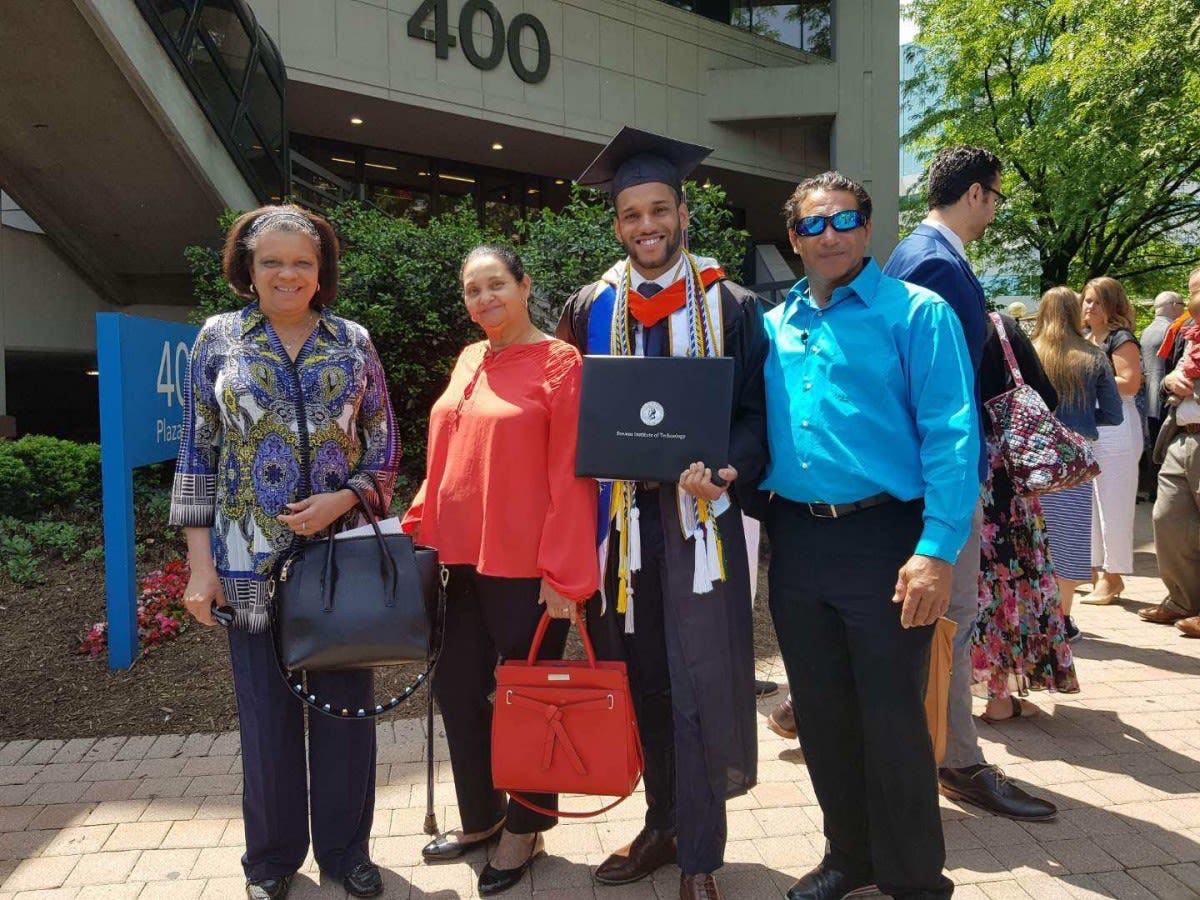 Jose Angeles-Ovalles with family members – his mother (far left), his grandmother (to his right) and his father (far right)

His parents, originally from the Dominican Republic, had moved to Puerto Rico, where Angeles and his sister were born, and later to New Jersey, to create a better life for their children. Adjusting to life in the U.S. was difficult for his parents, he says.

“They struggled with the language barrier and my mother left a decent job in Puerto Rico so that my sister and I could have the educational and professional opportunities they never had,” said Angeles.

“For my family, my Stevens education and the opportunities it has afforded me validate all the sacrifices they made.”

Angeles says he chose to major in electrical engineering because he was inspired to help create the future.

“When I was in high school, Verizon was promoting a lot of internet technologies, like connecting my refrigerator to my phone and things like that. And I wanted to do that.”

Intent on gaining as much real-world work experience in as many industries as he could through Stevens Co-op, Angeles endured lengthy commutes from his apartment in Hoboken.

His first co-op took him to Moretrench, a geotechnical contracting company in Rockaway, New Jersey, where he was exposed to a broad scope of general engineering work.

At his second co-op – at V-COMM in Cranbury, New Jersey – Angeles was part of a team tasked to connect New York City’s subway stations with cellular and WiFi capabilities.

Going to college at an institution like Stevens with its co-op program, in this location, I knew I would be really close to all kinds of employment opportunities.
Jose Angeles-Ovalles ’19

He then commuted to medical device company Mindray in Mahwah, New Jersey, where he worked on a patient monitoring system from inception to market.

Angeles' last work experience while at Stevens was a summer internship that took him even farther away from Stevens: he traveled to Tucson, Arizona, weathering the intense Southwest heat for the chance to work at Raytheon, a major defense contractor.

“It was 100 degrees every day without fail,” he noted. “But I learned a ton while I was there and got to do a lot, including systems testing, project management and a lot of drawing. It was an amazing opportunity.”

The impressive work experiences gained through his co-ops and internships led to multiple employment offers during his senior year. Angeles says EY was the one he had been waiting for, citing his interest in business and consulting.

“The technical-based knowledge and background that I have is what a lot of the financial market is moving toward, and I knew that I could leverage my experience as an engineer in that industry.”

Finding his place and purpose on campus

Adjusting to Stevens’ demanding curriculum was never an issue for Angeles. In his first semester, he achieved a 4.0 GPA and maintained an impressive 3.5 GPA or higher for the remainder of his academic career.

Being engaged allowed me to be part of something bigger and make an impact. I also found that I enjoyed Stevens more once I started getting involved and connecting with people.
Jose Angeles-Ovalles ’19

But while he thrived academically, Angeles struggled to connect with peers and the campus community in general.

“When I came to Stevens I didn’t feel like I had a group of people that I could be myself around, for the first semester at least. So I kept to myself and focused on my classes.”

That started to change in his second semester when Angeles joined the Stevens chapter of Lambda Upsilon Lambda, the Latino fraternal organization.

“That’s really when I started to feel more at home, because I had people I related to.”

It was through LUL that he participated in relief efforts to help devastated communities in Puerto Rico in the wake of Hurricane Maria in 2017.

Angeles also joined the Society of Hispanic Professional Engineers (SHPE), an organization he feels indebted to professionally and personally.

“Through that organization I was connected to mentors whom I still thank, and after attending the SHPE annual conference I made contacts that led to my internship at Raytheon.”

“The staff at STEP are always there for you whether it’s for personal, academic, professional or any other reason. The connections you develop through that office run deep. When you see students here that come through STEP, they stay friends for life.”

For my family, my Stevens education and the opportunities it has afforded me validate all the sacrifices they made.
Jose Angeles-Ovalles ’19

As his network of friends and mentors grew, so too did his involvement in the Stevens community. He participated in the Peer Leader Program, the Peer Mentor Program, Student Life activities, and served as president of SHPE and on the Diversity & Inclusion Committee of the Student Government Association.

“Being engaged allowed me to be part of something bigger and make an impact. I also found that I enjoyed Stevens more once I started getting involved and connecting with people,” he revealed, offering advice to new students:

“Find something that you’re passionate about. Go to the club fair. With 100+ clubs, there’s definitely something for you. College is about more than academics. Getting involved helped me grow as a person, provided me with so many opportunities and created great memories at Stevens.”