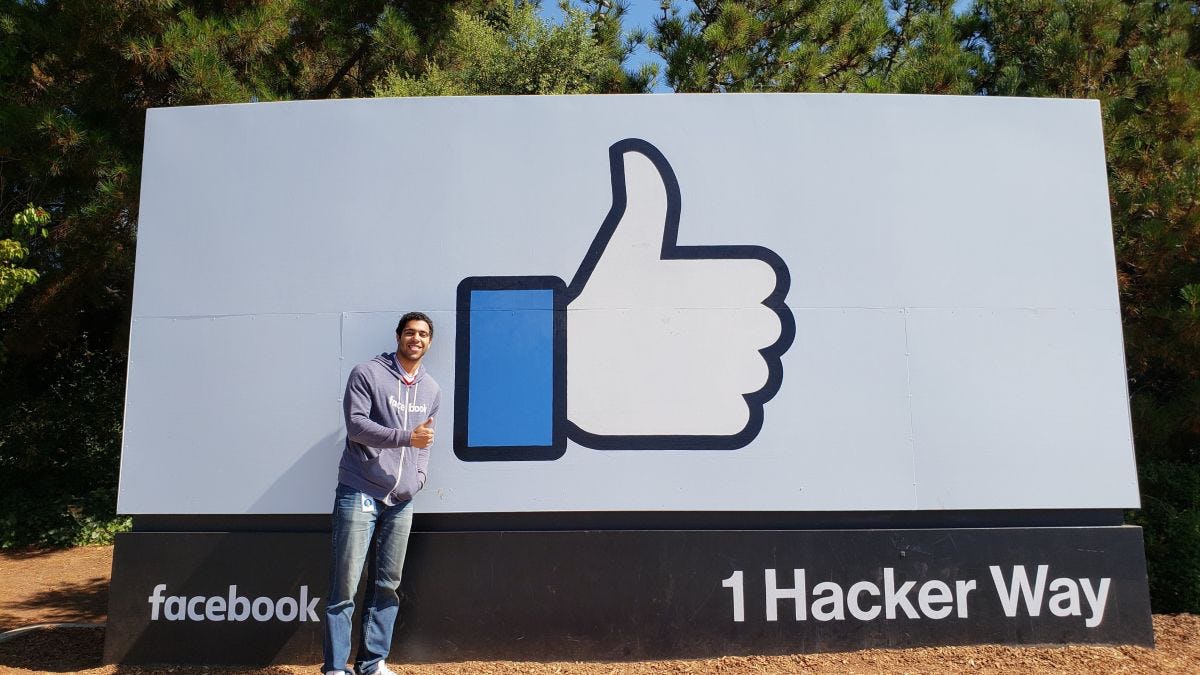 When Stevens senior Faris Ibrahim began his internship at Facebook in June, what impressed him most weren't the weekly Q-and-A sessions with Mark Zuckerberg nor the endless perks that came with working at the social media titan’s celebrated Menlo Park campus.

Five-star gourmet meals and spa services aside, Ibrahim was amazed by the extraordinary level of trust and expectation Facebook placed on its interns.

“They don’t have specific tasks for interns. They treat us like employees who can make a huge impact on Facebook.”

When he spoke about his experience in July, that’s precisely how he felt.

“I feel like, at the end of my internship what I do here could potentially save Facebook millions of dollars,” he said.

From day one, Faris constantly impressed me by going above and beyond in every assignment. I naturally started taking an interest in his growth and development and invited him to special nurturing programs we run here at Stevens for talent like him.
Professor Mukundan Iyengar, Electrical and Computer Engineering

“It was a lot of back-end work. The team essentially helps deliver performant, useable, reliable, efficient platforms and end-user tools for the collection, management and analysis of data at the scale of a company like Facebook.”

The computer engineering major was among the legions of high-tech undergraduates worldwide to apply for a summer internship at Facebook. He received the call that he was among the selected few after he completed his final exams at Stevens and flew home to Egypt for the winter holiday.

When he began his internship, he was quickly introduced to Silicon Valley’s community of technology elites.

“The amount of brilliant people you meet is crazy. My roommate was from MIT, my mentor at Facebook was from Caltech. It’s amazing to have such a strong network of people working at places like Apple, Google, Amazon and elsewhere in the Bay area.”

Not to mention, actual face time with Facebook’s famous CEO and COO.

“Every Friday there was a Q&A with Mark Zuckerberg. He would answer any question an employee asked. In fact, there was a Q&A specifically for interns. Sheryl Sandberg, the COO, also had intern meetings. At Facebook, if there is a question that an employee has on a serious topic, it’ll get answered by someone. Mark may answer it himself.”

Born in the U.S. and raised in Cairo, Ibrahim believes his international background was an advantage during Facebook’s hypercompetitive selection process. His previous internships were both in Egypt, one with an online payment startup, working on blockchain technology, and another at a Microsoft research lab, where he worked on natural language understanding.

“Facebook believes that diverse backgrounds can introduce insight into a problem. It’s not by coincidence that my team members were from China, Romania and the U.S. If everybody is approaching a problem the same way then you’re always going to solve it in the same way. You need to have different points of view.”

Ibrahim’s candidacy for a Facebook internship was also boosted by hands-on projects he created in tandem with taking classes at Stevens.

Surprisingly, Ibrahim had never coded until he came to Stevens. He initially set out to become an electrical engineer, but a programming class taught by Stevens professor Mukundan Iyengar shifted his focus.

“Professor Iyengar is someone who always encouraged me and gave me great advice about classes I should take and what I needed to do to impress employers.”

Iyengar took on the role of a mentor, helping to encourage Ibrahim’s drive to create and build complex things.

"From day one, Faris impressed me by going above and beyond in every assignment. I naturally started taking an interest in his growth and development and invited him to special nurturing programs we run here at Stevens for talent like him,” said Iyengar.

On the advice of Iyengar, Ibrahim applied his education to develop a portfolio of hands-on projects that showcased his creative thinking and problem-solving abilities.

“After completing Professor Iyengar’s data structures and algorithms class, he advised me to start building things so that companies would take notice of me and that would open up opportunities. Little did I know at the time how right he was.”

At Facebook, Ibrahim put in long hours, but he thrived being in an environment that encouraged his ideas and tested his abilities. And it's always possible he'll apply for a career at the company post-graduation; Faris admits the idea is on his mind.

“It wasn’t an internship. It was real work, and all of the stresses and responsibilities that come with that. I pushed myself like never before because it’s not every time you get an internship at Facebook. It was a great learning experience that sets me up very well for the future.”