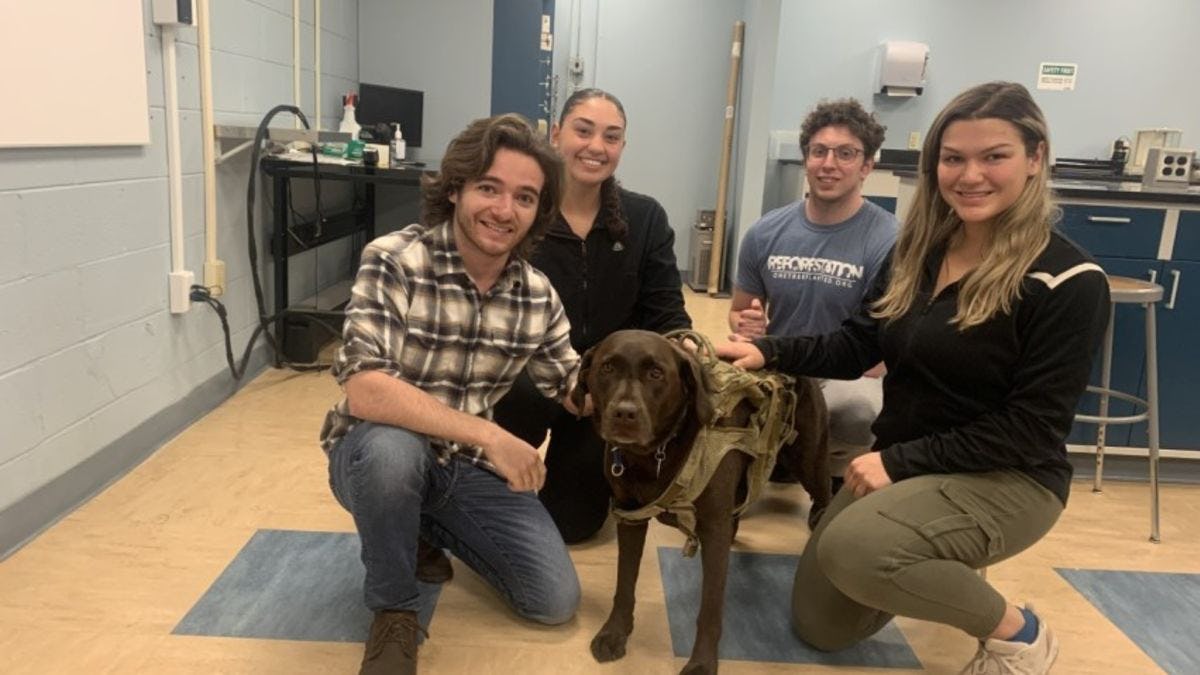 Working in the military isn’t just potentially dangerous for the men and women who serve. It can also be a risky undertaking for the approximately 2,700 dogs worldwide who perform vital U.S. military roles, often in extreme conditions.

Each dog works under the command of a trained handler responsible for the animal’s care and training. Over the course of a typical eight- or nine-year career, a service dog can save as many as 200 human lives as it carries out critical tasks including tracking, explosive detection, patrol, search and rescue, and attack.

“The military has made diagnostics for servicemen and women in the field, but the dogs are out there too, and they can't tell us when something’s wrong,” said Salvatore DiMaggio ’22, who plans to pursue a career in medical device design or drug development after graduation. “Our goal was to make a diagnostic system that could evaluate the dog and send data directly back to the handler. We looked at a lot of concerns like traumatic brain injury, and decided to focus on heatstroke and stress, which we believed we could monitor accurately, and which the military dog handlers Capt. Shepherd connected us with said are their priorities.”

Warning signs for heatstroke and stress can remain hidden until the dog can’t compensate and is suddenly not only unfit for service, but also at very real risk of permanent harm. Over the course of the past year, the students created a non-invasive solution that can be integrated into a dog’s existing vest harness to provide continuous measurements of the dog’s stress levels and core body temperature. Then, using MATLAB programming software and a wireless interface, the students envisioned an alert system to tell the handler when the animal is highly stressed or close to heatstroke.

“A heart rate monitor on a chest strap monitors heart rate variability, which is a good indicator for stress,” explained Michael Bloss ’22, who is looking into a career in biotech or pharmaceuticals after graduation. “The humidity and temperature sensor, placed in a pocket of the vest, along with the gyroscope and accelerometer on the back of the harness to measure activity, will allow us to predict core body temperature to prevent heatstroke. The whole system weighs less than five ounces, so it’s not a burden to the animal. It felt great to dig into new material, parse through what's going to be useful and what's not going to be useful, do the coding for heart rate variability and invent something that can truly be lifesaving.”

The heatstroke monitoring part of the system uses the team’s simplified version of the U.S. Army’s canine thermal model, which Ashleigh Nagy ’22 found in her research.

“The model is super-complicated, and I ended up scheduling meetings with Army personnel for help going through the dozens of equations in the model,” said Nagy, who is looking into a career in research or medical devices after graduation. “In our engineering design classes, we’ve had a taste of how projects work, how to work on a team and how to design. The senior design project is a great way to ease into a much bigger problem where we’re more on our own and have to reach out to people and figure out a solution.”

Through a simulation in the MATLAB design software, the team also presented its vision for an app compatible with the dog handler’s Android Tactical Assault Kit device.

“We truly experienced the whole process of end-to-end development,” DiMaggio said. “We took on a problem, and no one knew the solution, so it was completely up to us to figure out how to best address it and turn our solution into reality. That was the cool part – starting with nothing, and making something that can help solve a real problem. It was a very good preparation for the professional world.”