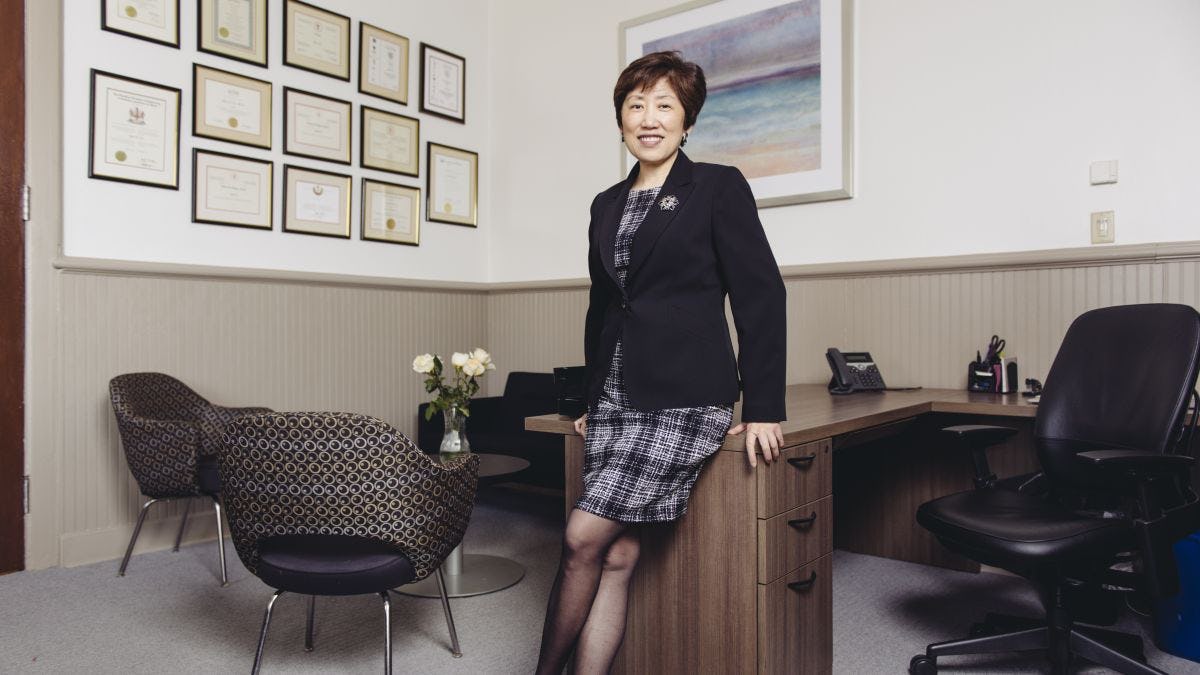 Jean Zu never set out to be the first anything, or to break any barriers. But she would follow her own path — one that included conflicting messages and unexpected hurdles along the way — and do just that, becoming the first woman dean of Stevens’ School of Engineering and Science (SES)  when she accepted the position two years ago. It’s a recent entry in a long line of firsts for Zu, who has spent much of her life living up to her father’s standards. And, to a lesser degree, her mother’s.

“My mother always tried to train me to do housework, as a girl,” she says. “So, to this day, I cook and I clean.”

While “being feminine” was important for her parents, so was academic success.

“I was an obedient child. My father was a high achiever and he expected the same from his children, especially with no sons.”

Zu and her sister, a physicist based in Shanghai, would not disappoint. They prioritized their studies, which were somewhat limited.

“When I entered school, it was right after China’s Cultural Revolution. People suffered persecution; my father was persecuted and because of this, he didn’t want me to study arts because it was dangerous. I wasn’t any good at it anyway,” she jokes, explaining that she was good at math, so it was a natural course to follow.

Zu entered the prestigious Tsinghua University in Beijing as one of nine female students in a class of 35. It was a challenging environment, but she powered through, earning both her bachelor’s and master’s degrees in engineering mechanics. She then began teaching at Tsinghua as one of a handful of female faculty.

It was a short stint, though, because Zu had her sights set on a more ambitious adventure: studying in the West. “I was [teaching at Tsinghua] for about two years and I really treated it as a transition. I just wanted to practice English and find somewhere to study for my Ph.D.”

She did both, landing alone in Canada at the University of Manitoba, with $40 in her pocket, leaving behind her new husband.

“When I started dating my future husband, on his first meeting with my father, my father told him that I was going to study abroad and asked him if he would support it.” She laughs. “So, when the time came, it wasn’t an issue.”

Though the decision to go to Canada may not have been an issue, Zu would soon find herself facing new and life-changing challenges. Her focus was to live up to her adviser’s expectations: make all As and get published within six months.

The bar was high, but Zu had never met a challenge she couldn’t overtake. Having been tasked with finding a finite element analysis code, Zu threw herself into the assignment but couldn’t get her program to work. For the first time in her academic career, she got stuck.

Devastated at the thought that she wouldn’t be able to publish, and driven by her upbringing to perform and meet expectations, Zu was in uncharted waters; the prospect of failure was foreign to her. Compounded by social factors — as one of few female Ph.D. students, very far from home, with little family support (at the time, it cost roughly $3 per minute to call China), and only enough money to fund basic essentials — Zu was left with anxiety she’d never felt before.

“Basically, I woke up around 5 a.m. every day and my heartbeat would speed up out of nerves.” She pauses, then continues, explaining that she questioned her own existence. “Every morning I would think about it. It was a very painful experience.”

She is unashamed and unapologetic, telling the story now with candor and confidence.

But the experience left Zu herself heartbroken. She recalls that even five years removed, she would cry the moment she mentioned it.

“It’s hard to believe, right? Because now I am so positive. But I believe behind every successful person there is some struggle. Otherwise, we wouldn’t be so strong. So many people deal with this but nobody likes to say it. I’m very open-minded — I don’t mind exposing myself and my weaknesses.”

“I thought of giving up,” Zu recalls. She went so far as to book a ticket back to China — but her parents found out and demanded she rip it up, concerned that if she returned, she may not be able to leave again. A few months later, her husband joined her in Canada, which helped a great deal.

“Gradually, I came out of that low point. And once you come out of it, you are very strong — because you’re motivated not to put yourself in that position anymore.” Her resolve paid off. “One year later, I was so clear and determined to pursue an academic career, I wouldn’t allow myself to go back. I’d been through the worst; I was on top of the mountain.”

Zu carried on and two years into her Ph.D. program, she became pregnant with her first child (a daughter who graduated from Harvard with a psychology degree and now works in Shanghai). At the same time, she was offered a coveted teaching position, with one caveat: She would only be allowed two weeks’ maternity leave. (At the time, in the early ’90s, standard maternity leave in Canada was four months; however, there were no maternity benefits for students.) She took the job and began teaching dynamics while eight months pregnant.

“Pursuing an academic career was the goal I’d set, so I was willing to do anything,” she says.

Then, another challenge: Zu experienced a complication during childbirth that left her with a painful torn muscle and kept her hospitalized for 12 days. Unable to sleep and worried about her return to the classroom, she was finally connected with a specialist from her homeland who offered her some relief.

“I was obligated to return after two weeks — I had to keep my promise.”

So, two days after her release from the hospital and exactly two weeks after giving birth, she was back in the classroom, walker in tow. But she already knew she could, and would, handle it.

“After my nervous breakdown, even challenging experiences weren’t that challenging, because I was so determined for happiness and to not let myself down. Pursuing an academic career was the goal, and I was willing to make every effort to achieve the goal.”

And she did. Her perseverance paid off — she was offered a tenure-track assistant professor position in the Department of Mechanical & Industrial Engineering at the University of Toronto. Even there, though, she would face maternity-related issues when she became pregnant with her second child (a son who is studying business and technology at Stevens). She was the first faculty member in her department ever to go on maternity leave — and there wasn’t a policy to allow for it. She was asked to make up a semester on her tenure-track clock and, in line with her obedient nature, she agreed to do so.

“I was only the second female faculty in the engineering department — the first had only come a year and a half before me — so they had to learn. But after me, there were many more and it was no longer an issue.”

But not all issues would result from her pregnancies. Some would stem from the ignorance of her colleagues. In 2009, Zu was selected as the first female chair of her department at University of Toronto, and while it was an exciting time in her life, not everyone was happy for her.

For example, the chair’s assistant took a two-week vacation at the start of Zu’s tenure. “When she returned, she said ‘I had a good vacation until last night because I had a nightmare thinking about coming back to work for you,’” Zu recalls, still somewhat appalled when she hears herself tell the story. But Zu, ever the professional, kept her on.

“It was a department that had the same style of operation for a very long time, but she’s a nice person and was capable in her job,” Zu says. “She resisted change and I understood that it was difficult for her to change to a different boss with a different work style. But I had to modernize and after half a year, I proved to her that I was qualified.” The assistant stayed with Zu for three years, before retiring.

And now, the only woman among Stevens’ senior academic leadership , Zu continues to prove herself both a strong and empathetic leader. She considers recruiting female faculty as one of the important aspects in building a strong school, noting that diversity helps everyone in her school and across the campus at large.

“For women to gain confidence in a male dominated field, they need someone they can relate to, so that they can be positively influenced. But it’s also important for the advancement of science and engineering. No matter how smart you are, another angle always adds more,” she says. “The team is important; one plus one is greater than two.”

Which is why she tells her female students to have patience and urges them not to give up.

“There can be so much self-doubt and insecurity. So my best message to female students is to stay the course. Go step by step and be patient — your time will come.”

She’s lived her own advice, finding her own confidence from persisting and persevering in the career she wanted to pursue.

She chalks up many of her professional accomplishments — more than 340 journal and conference papers, serving as president of the Canadian Society for Mechanical Engineering from 2006 to 2008 and the Engineering Institute of Canada from 2012 to 2014 — to learning how to prioritize her life.

“After becoming a faculty member in Toronto, I realized that it’s impossible to do everything, so I learned to prioritize. First is family, second is health and third is work.”

She continues to nurture all three, enjoying her children, fostering her own confidence and self-acceptance, and continuing to push SES into new and exciting territory.