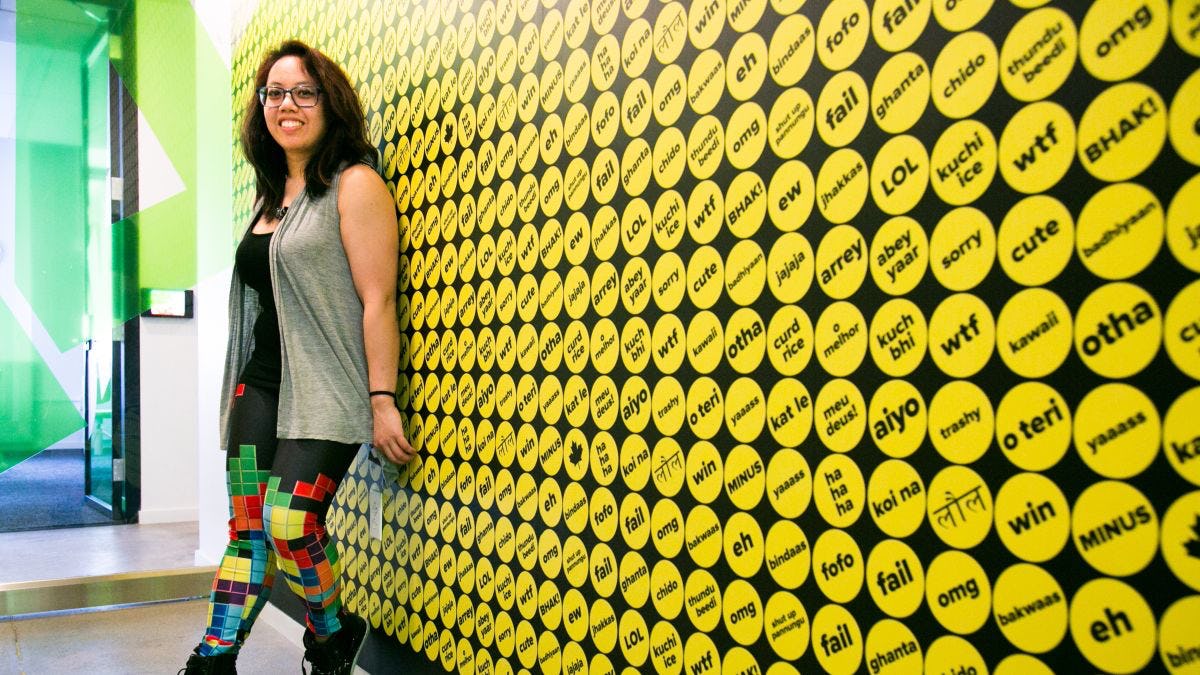 Graduating in 2012 with two degrees — a B.S. in computer science and a B.A. in visual arts & technology — Caroline Amaba turned a part-time internship at VaynerMedia into a full-time gig. After helping the company launch its tech team, she spent five years doing web development and social media and digital advertising before she made the jump to BuzzFeed, where she recently celebrated a work anniversary.

Q. You’re currently a software engineer at BuzzFeed. Can you tell me what that’s like?

I am primarily a front-end engineer on the Ads Group at BuzzFeed. This means I'm usually working on the code on the website that interfaces with BuzzFeed's many users. Specifically, I work with our product managers and designers to create ad products for clients who want to advertise on the website. I also spend some time helping manage our social media presence (both myself and getting others to run our @buzzfeedexp Twitter account), and I help write, edit and plan various tech blog articles.

The office is an amazing, welcoming and diverse place! Everyone is extremely smart and helpful, and we all have a common goal of doing our best work. My first year at VaynerMedia I learned a lot in general and mostly about being part of the professional world post-graduation; with my move to BuzzFeed, I've learned even more, and I continue to hone my programming, design and leadership skills. Everyone here supports each other.

I'd also like to note one of the reasons I came to work at BuzzFeed was the amount of diversity here. Dao Nguyen, publisher and BuzzFeed Tech's fearless leader, recently published a diversity report for 2018 thus far. BuzzFeed Tech's diversity is improving greatly, and I'm very proud to be part of an organization that values that. It makes the atmosphere even more welcoming, and the plethora of ideas and perspectives we have is enhanced greatly by this diversity.

Q. How did your VA&T degree help you transition into a career in the tech/media space?

A lot of employers liked my experience with computer science, but with the design background I got from VA&T. I also was originally applying to jobs as a UX/UI Designer. Web development and front-end development work just sort of found me during my time at VaynerMedia (I always liked coding). My digital design experience, though, helped me to bridge the gap between our designers and our developers, and those merged sets of skills became very key in building that bridge. I never just did "tech speak" — I could also talk design and visuals as well and find a happy medium between the two. Also, my more technical thinking from my C.S. degree informed how I went about some graphic/visual design problems; likewise, the visual/design thinking helped me think holistically about my code choices and software engineering.

Q. What’s one achievement you’re really proud of that you feel Stevens helped prepared you to tackle?

At Stevens, both in classes and in a number of my extracurriculars, I made a good number of presentations. Also, while graphic design was always a hobby of mine, design skills I learned in my VA&T classes refined my work for making good-looking graphics and presentations. I recently gave my first talk at a tech meetup, which was a big step for me. There's something about presenting in front of your peers at college, but another in front of total strangers. Either way, I had enough confidence in my skills and abilities, and everything I learned while working, to make a great presentation. I got a lot of great feedback after the talk, too — people told me they didn't think it was my first talk (in a way, it wasn't, but as a meetup talk it was).

Q. Where do you see yourself in five or ten years? Where would you like to be?

March 20, 2018, was my one-year anniversary at BuzzFeed. The amount I've done at BuzzFeed is astounding for just one year, and it has been so exciting! I'm enjoying my time here, and currently, I don't think I could tell you where ten years will land me.

To be a bit introspective, part of my decision to leave the agency world was because the work itself was getting somewhat stale for me. I wasn't being challenged enough. It was time for a change, and I think moving to work for BuzzFeed has been an amazing decision. I recently have been discussing with my manager, my peers and friends about what I really do want to do, now that I’ve dug my hands into product development. I'm a maker, and I love creating things, be it on the side as my art hobbies, or at work (and sometimes on the side!) with my code. I've been working on projects that have me really "in the trenches," as it were, writing code and making big design decisions. I think in the next two to three years, I see myself as staff engineer or individual contributor in some sort of sense: generally just sticking to writing code and building things!

As for the next five...Not quite sure yet, but I do know, be it at BuzzFeed or not, I'll want to keep working on products and building things. I still see myself coding, making. I've been slowly getting back into art and some digital design, and I love merging the two: Code can create some beautiful pieces. Maybe I'll have a change of heart in the next few years and want to go down the managerial route, who's to say? Either way, I just want to produce great, meaningful products and designs.

It's crazy how outside interests get you noticed or make great interview starters. My resume has that I'm a Dungeons & Dragons Dungeon Master (I run the game for players), and it has been quite the conversation starter (also, being a Dungeon Master has a lot of transferrable skills to the real world, like scheduling, conflict management and working well under pressure). And I recently took up climbing! Aside from the gym, I've gone outdoor bouldering in Central Park and the British Virgin Islands. I actually got to reconnect with some fellow alums this way!