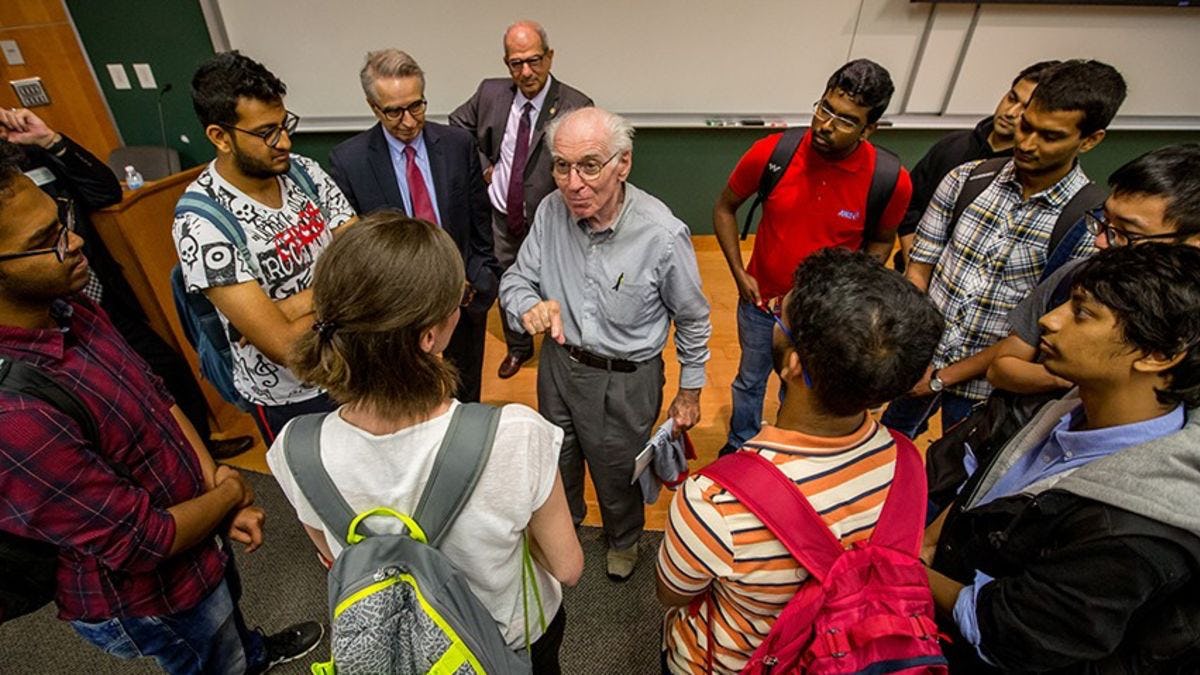 Students ask Josh Weston about his leadership experience and seek career advice following his talk in the Babbio Center at Stevens.

In Visit to Stevens, Josh Weston Shares Key Lessons from a Career in Leadership

Josh Weston stepped down as CEO of ADP in 1996 — well before technology brought streaming data and real-time analytics to business intelligence.

But data was still important to ADP and Weston, who oversaw a period of incredible growth at the payroll and benefits services giant. Even then, though, he understood the dangers of confusing data and knowledge.

In a talk at the School of Business at Stevens Institute of Technology, Weston talked about the forest of paper reports ADP’s 30-plus operating locations would generate each month, containing key information about sales targets, employee performance and so on.

“What do you do with all that data — how do you make heads or tails of it?” he asked the audience.

Tableau had not yet been founded, but the basic dashboard ADP created would be familiar to anyone who’s done data visualization work — the company’s locations, the eight most important metrics and colored bars to represent top performers and areas in need of improvement.

“And we shared that information with the general manager at each location, and with their direct reports,” Weston said. “With all these pieces of paper flying all over the place, this told the whole story.” 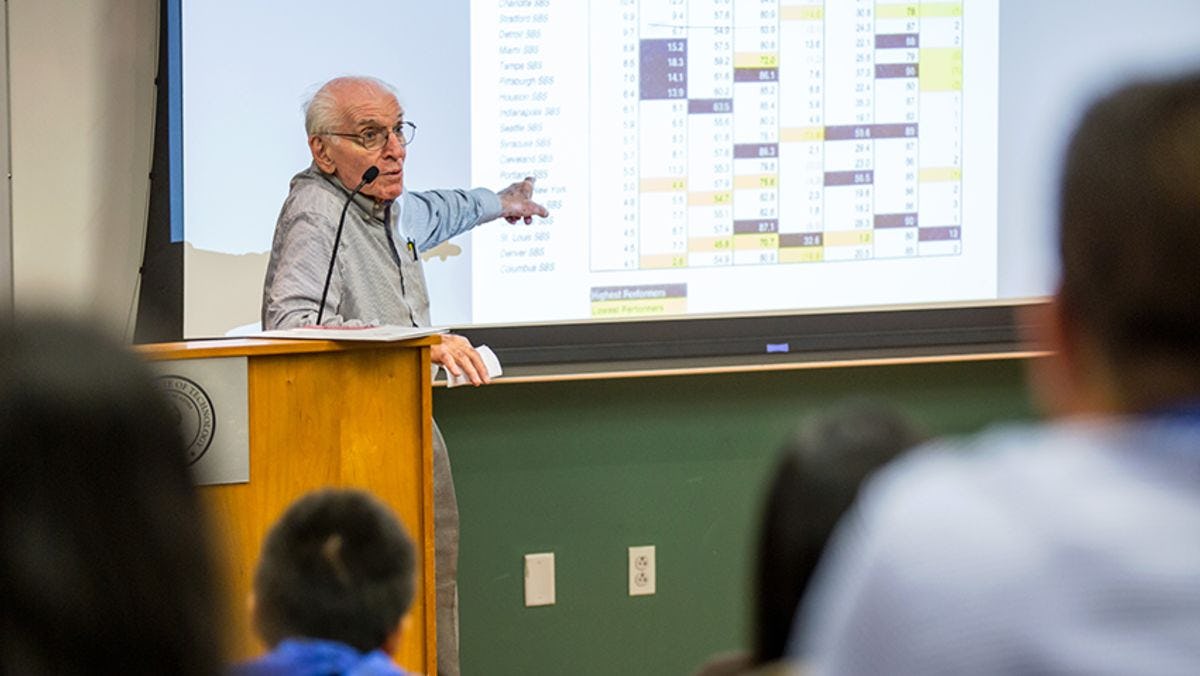 Josh Weston shows students a dashboard he used to visualize reports from the more than 30 operating centers ADP ran while he was CEO.

Weston called it DINK — short for data is not knowledge. Finding insights in data requires careful planning and analysis, and for those charged with accumulating and disseminating the mountains of data, “you need to think through what matters and makes a real difference, and figure out how to make it obvious to the people who can use this information create impact.”

Being smart about business intelligence was just one lesson Weston shared with a packed lecture hall in the Babbio Center. He enjoyed a long career with ADP after being recruited to the Roseland, N.J., company by then-CEO Frank Lautenberg, who passed the reins to Weston after launching his political career. But since stepping down as chairman in 1998, he has become when Dean Gregory Prastacos called “a friend to Stevens and higher education” in his introductory remarks.

Weston has shared his experiences in business with Stevens and other universities in the area. His contributions to Stevens are many and include leading support of the Pinnacle Scholars program, which provides tuition support and opportunities for research, mentorship and study abroad to the most incoming exceptional freshmen. He received an honorary degree from Stevens in 1996.

His talk focused on leadership concepts he said were critical to his success — from effective communication, to strategies for motivation, to the reminder that employees are a company’s most valuable resource. 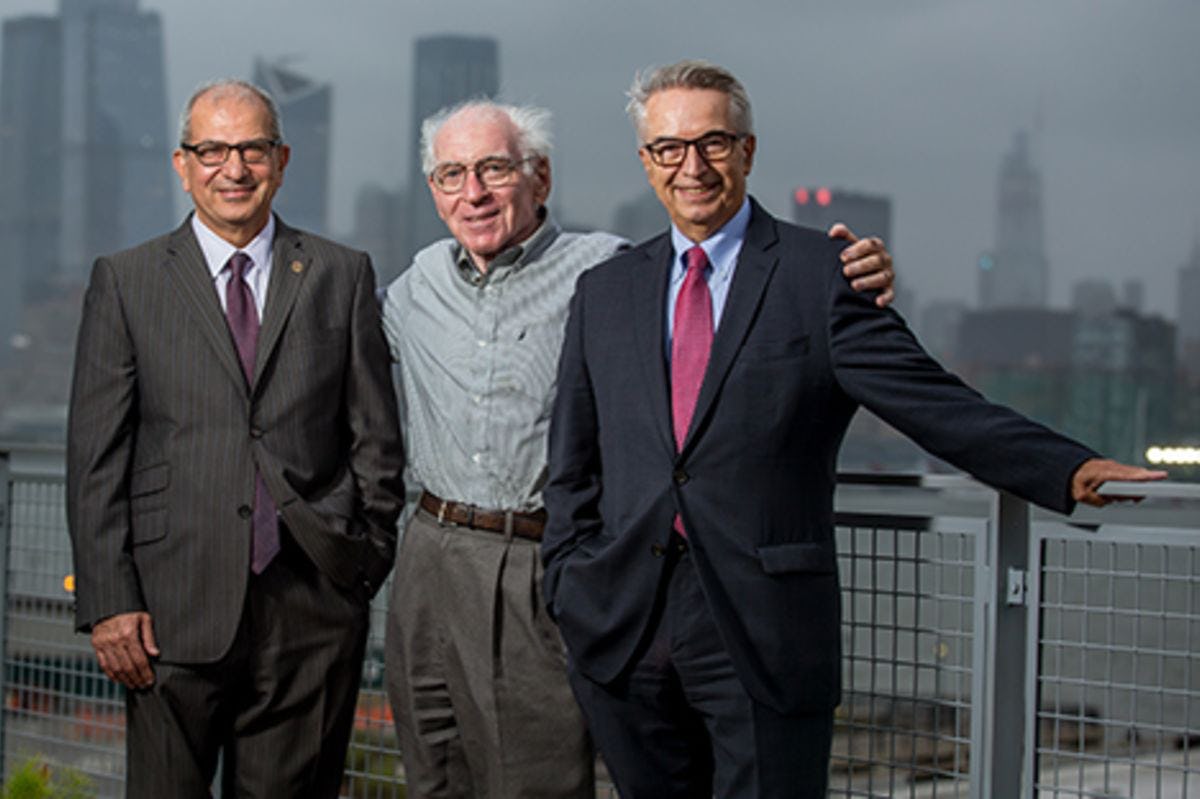 “The chairman or CEO puts out an annual report for shareholders, and the last paragraph always thank employees for their contributions,” Weston said. “It doesn’t mean anything. If you don’t walk the talk all year long, if you don’t understand that your people are your best asset, then you as a CEO are not doing your job.”

Weston also discussed contemporary topics, including his views on integrity in the workplace and CEO compensation packages. He also took questions from students, who asked how to build a small company like ADP into a powerhouse and how to prepare for the rigors of leadership in business.

The latter was a question he particularly seemed to enjoy.

“Most of what I learned was OTJ, on the job training,” he said. “But there are books worth reading, courses worth taking — and occasionally,” he said, smiling, “speakers worth listening to.”