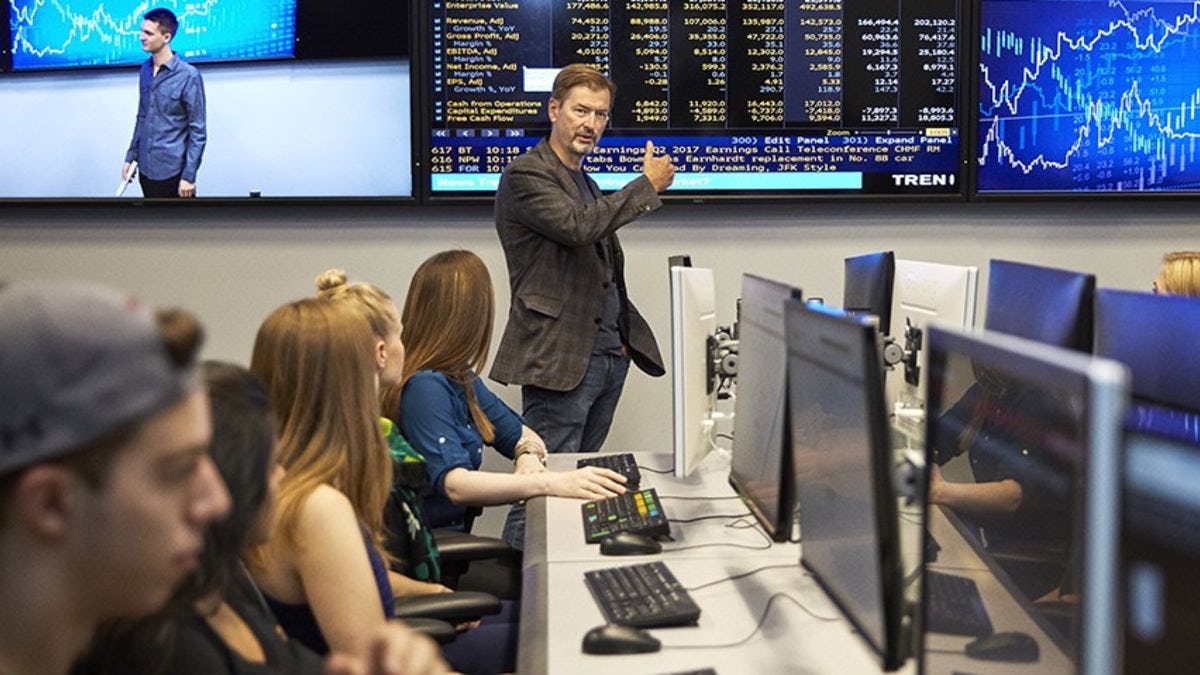 Dr. George Calhoun leads a class in the Hanlon Lab at Stevens. 'The QF program is not about breeding any one particular narrow type. It’s based on the premise that any job in finance today is a high-tech job,' he says.

Ask hiring managers in the finance industry, and they’ll tell you that when it comes to preparing tomorrow’s generation of tech-savvy professionals, there’s no place quite like the School of Business at Stevens Institute of Technology.

In particular, you’re likely to hear about the bachelor’s degree in Quantitative Finance, one of the only programs of its kind in the nation. The reason you’ll hear so much about it is the sheer number of Stevens alumni who work on Wall Street, from industry giants like Goldman Sachs and JPMorgan Chase to small startups. 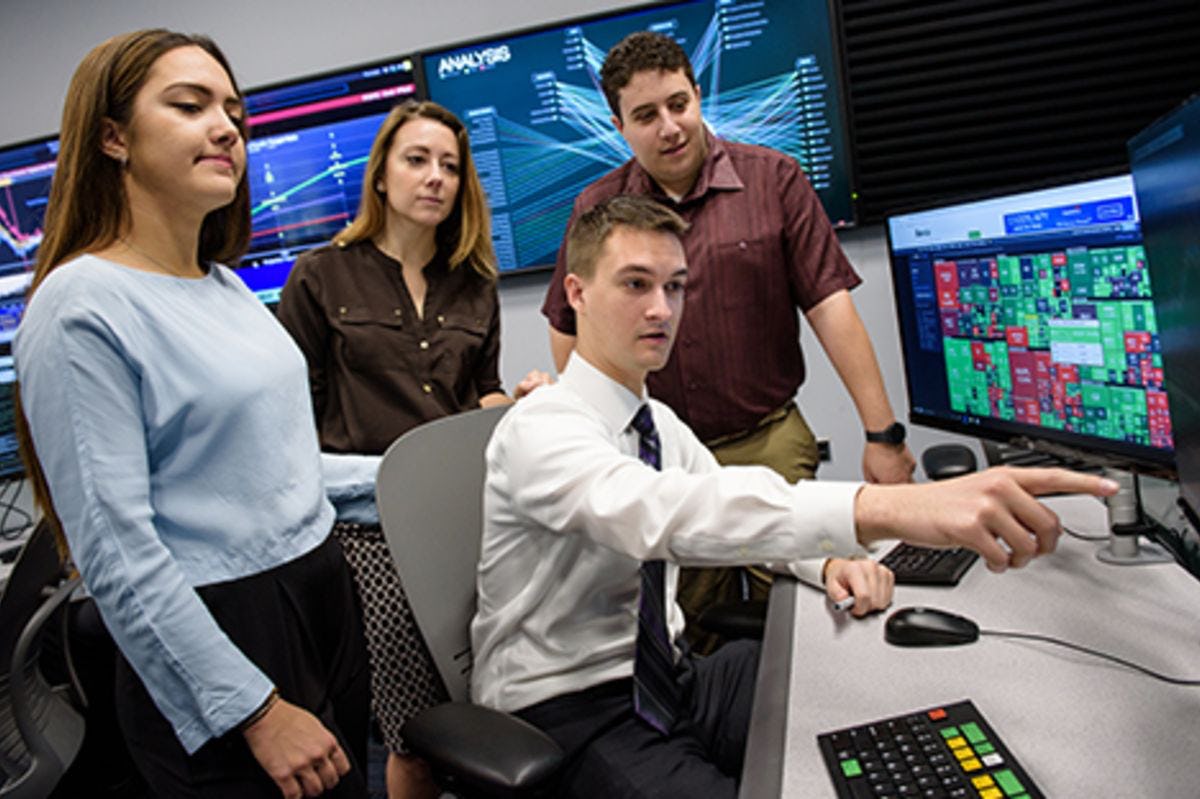 Dakota Wixom, seated, walks classmates through financial data in a Hanlon lab facility. 'There's such a huge need in this industry for people who can combine these skills,' he says.

In fact, Forbes magazine recently profiled the Quantitative Finance program at Stevens, saying the degree program was one factor in “helping make Stevens one of the most desirable STEM colleges in the nation.”

That’s a sentiment Dakota Wixom ’17 M.S. ’17 readily subscribes to. Wixom, now a quantitative analyst with startup Yewno, said the blend of finance, math and computer science skills at the heart of the QF program give Stevens students clear advantages in the workplace.

At Stevens, Wixom said, “you’ve got access to all the statistical techniques, you know the math, you understand the economic principles and financials of individual companies, and you’ve got programming techniques. And there’s such a huge need in this industry for people who can combine these skills in ways that push the business forward.”

And it’s not just industry where QF students and alumni are able to create impact. Victoria Piskarev, a junior at Stevens, spent her summer on an internship with the government of New York City, working in risk management for its Office of the Comptroller’s Bureau of Asset Management. Her background in the QF program, including fluency in R and Bloomberg certification, helped her eased into the workplace. 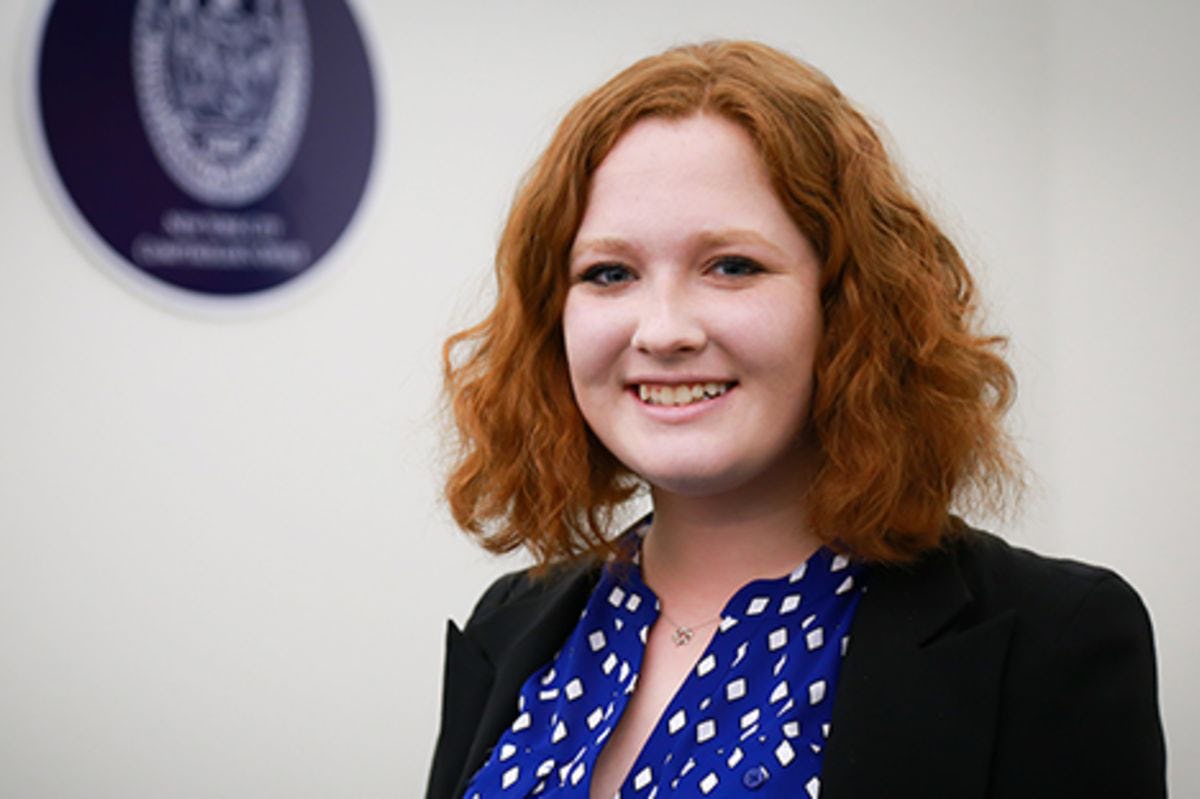 Victoria Piskarev on the job during her internship with the City of New York. She says her Stevens classes help her 'use technology in thinking about ways to solve problems.'

“In class, Professor Ionut Florescu assigned a lot of projects in R, which was helpful, because they wanted me to do a lot of testing in R,” Piskarev said. “And my QF background has really helped me develop a mindset of how to use technology in thinking about ways to solve problems.”

A great deal of students’ problem-solving skills comes from their mastery of the technology tools available through the Hanlon Financial Systems Center at Stevens. The center is home to two state-of-the-art financial analytics and visualization labs that employ some of the same data analysis and collaboration tools on the front end of IBM’s Watson platform.

Dr. George Calhoun is the director of both the Quantitative Finance program and the Hanlon Financial Systems Center, and said the technology and analytical emphasis of Stevens and the QF degree is a key driver of its value — 100 percent of business students who graduated in 2016 were employed or enrolled in graduate school six months after commencement.

“The QF program is not about breeding any one particular narrow type. It’s based on the premise that any job in finance today is a high-tech job,” Dr. Calhoun said. “So it can be asset management, trading, risk, audit or insurance. Modeling, startups, fintech — they’re all driven by the same set of requirements.”

Asset Based Lending, in Hoboken, fits that mold well. The hedge fund specializes in loans to real estate investors aiming to flip properties, and has a history of bringing Stevens students on as interns. Ryan Tom, a sophomore in the QF program, completed an internship there over the summer and is now working part time while attending class. 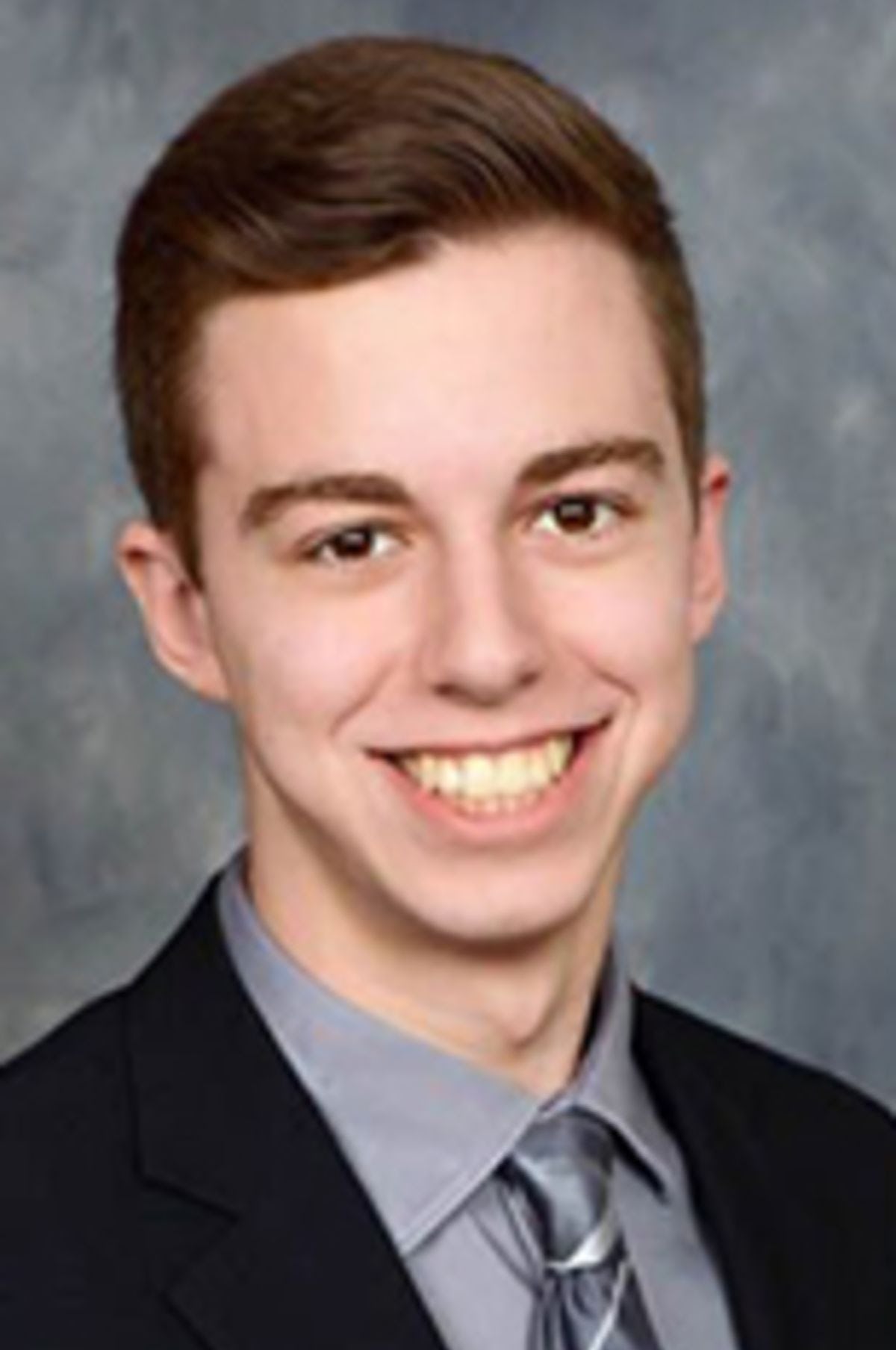 One of his most ambitious projects was tracking cash flow — a difficult assignment, given how the company structured payments to lenders and its sales team.

“I was working with our accounting system to get a better understanding of where our money was coming from why we had different income in other areas, and changes like that,” Tom said. “I also started working on a predictive model to understand what amount of money we’d need in our hands in order to fund all the loans coming up in the short term.”

Demand for professionals with the unique combination of skills emphasized through the QF program is only increasing — an important reason why Forbes and industry are so impressed with the Stevens School of Business.

“We had UBS visit a couple months ago, and they saw a demo by the QF students with our Student Managed Investment Fund,” Dr. Calhoun said. “The UBS folks came back afterwards and told me they had no idea undergrads were capable of this kind of work. That’s the kind of impact this program is having in the real world.”