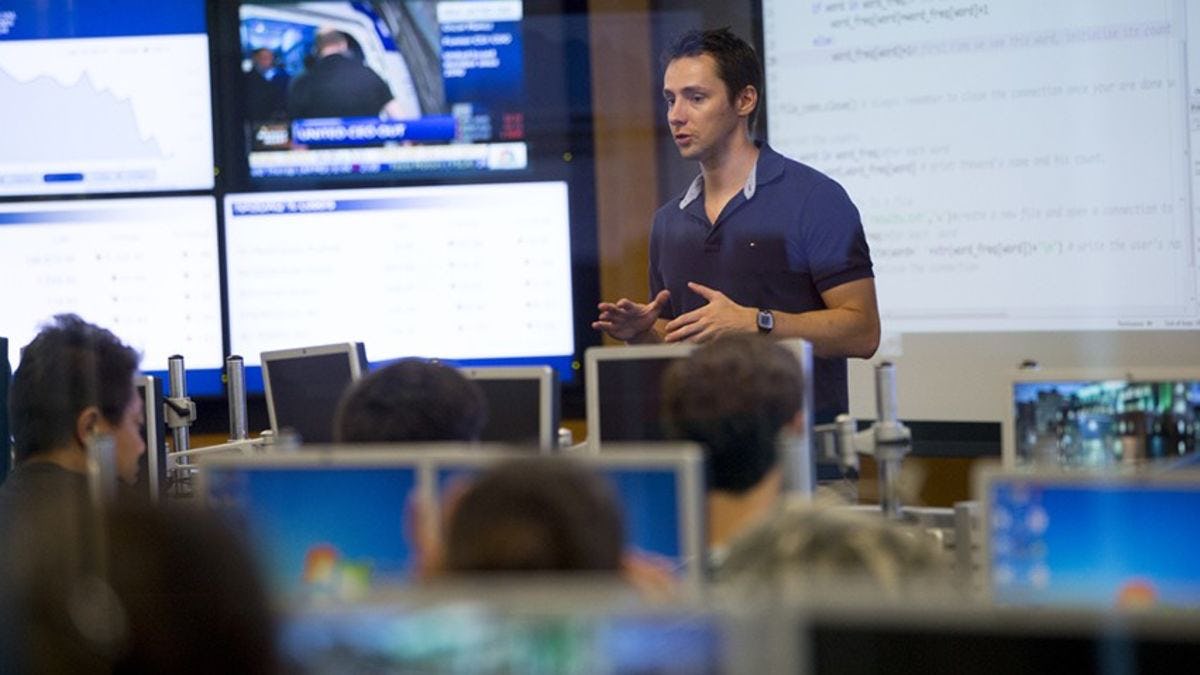 Dr. Ted Lappas leads a class in the Hanlon Financial Systems Lab. Both his research and his classroom lessons are informed by industry applications.

Businesses will go to great lengths to gain any sort of competitive advantage, but industry titans like UBS, Jefferies and JPMorgan Chase have found they don’t have to travel far to get an edge.

“Every week we have multiple companies that come here looking for insights,” said Dr. Ted Lappas, an assistant professor at Stevens Institute of Technology. “There is this move toward more data-oriented research, so being a computer scientist in a business school makes me a bit more popular, especially since we are only a few minutes away from New York City.”

Why does industry want to work with Stevens? The technology orientation of the university, and the School of Business, gives it a unique vantage point for how concepts like analytics, programming and artificial intelligence are poised to transform the business world.

He’s also part of a Stevens team working with Jefferies to develop an algorithm that will automate a daily email informing Jefferies’ customer base of trends, opportunities and potential traps in the market.

And with UBS, his research is centered around mining the question-and-answer portion of companies’ quarterly earnings calls, to both predict future performance and train a chatbot to effectively answer questions.

Computer science with a business twist

Although Dr. Lappas’ background in computer science has been beneficial, when he came to Stevens nearly six years ago, he had to figure out how his technical talents could translate to success at the School of Business.

“Computer science research is focused on algorithms and methods,” he said. “When it comes to business, there is more interest in how this research can be applied and used in practice.”

It didn’t take long for Dr. Lappas to adjust — and for his colleagues at the Stevens School of Business to take notice. Assistant professor Dr. Gaurav Sabnis was among those who approached Dr. Lappas to collaborate.

“When I got to know him, I said, you are brilliant at all this computer science and data collection, and I’m good at coming at it from a more conceptual, business-oriented side, so let’s talk about what we can do together,” Dr. Sabnis said.

What came of it was a paper that challenged conventions about fake reviews that appeared in a special issue of Information Systems Research, which was a runner-up for ISR’s Best Paper Award in 2016.

Dr. Lappas has had no shortage of opportunities to apply his expertise to other challenges facing industry.

“I have much more access to companies now than I would if I were in a computer science department,” he said.

Working with real company data gives his research weight, but it can also lead him to unexpected places, which is why Dr. Lappas said it’s important to be able change directions when a new research path reveals itself.

Adaptability is key not just for researchers, but for anyone looking to succeed in a technical role, as Dr. Lappas learned while working for multiple tech companies.

“I was using Java at IBM, and then I went to Yahoo and they used Python, and when I went back to a different team at IBM, they were using C++,” he said. “The language of technology is always changing, and it’s entirely possible that whatever you’ve learned might not be relevant in a few years. After that I realized it's not about what you know; it's about your ability to pick something up quickly.”

Teaching the next generation of data scientists

It’s something he also stresses in the classroom, where he simulates the sort of timed pressure students will have to deal with on the job and during interviews. Rather than assign homework, Dr. Lappas carves out a portion of his class time to have students tackle a problem related to that day’s lesson — ensuring these future data scientists have the business perspective to consider how the problems they’re facing represent potential opportunities to the enterprise.

It's not about what you know; it's about your ability to pick something up quickly.
Dr. Ted Lappas, ASsistant Professor

“I try to align my classes with the experience students will face at banks or tech companies, so they are prepared when they get there,” he said. “They need to be able to adapt and learn fast.”

He’s determined to train the next generation of agile data scientists, who will enter a job market where their skills are highly sought after. Yet, like all things tech-related, that too could change.

“Right now, the demand for data scientists is far higher than the supply — both at the student and the professional level,” Dr. Lappas said. “We have at least five to 10 years of this trend, and then, who knows? Something new might emerge.”

Whatever lies ahead, Dr. Lappas can be confident that he and his students are prepared to adapt.