Downs on the site of Northwest Resiliency Park in Hoboken. When construction is complete, the park will be not only a recreational space for area residents, but also a method of flood mitigation for the Mile Square City. Photo: Danielle Richards

Martin Downs ’04 M.S. ’05 built the foundation for his career as an intern at J. Fletcher Creamer & Son. Twenty years later, he serves as the company’s president.

Martin Downs ’04 M.S. ’05 first saw J. Fletcher Creamer & Son’s distinctive brown trucks on Castle Point, just a short walk from his room at the Delta Tau Delta fraternity house. Crews were blasting rock on the cliff above Sinatra Drive, preparing the site for the construction of the Lawrence T. Babbio, Jr. Center for Business and Technology Management. Then in his junior year, Downs couldn’t have imagined that one day he would be overseeing projects like these as president of the company.

For the Rockland County, New York, native, building things was always a part of life. “I’m from a blue-collar family, my father is a mechanic, and we were always working on some sort of construction project in the house or on cars,” says Downs. Athletics were also a priority — he played both football and lacrosse in high school. When it came time to consider colleges, Downs knew he wanted to study engineering but was torn between Stevens and another school. “I made the wrong decision at first,” he says. After two trimesters at a university in Boston, large class sizes made Downs rethink his choice. Then, a serendipitous call changed everything.

“The Stevens lacrosse coach called me to follow up and caught me at the right time,” says Downs. He transferred to the university the following fall. “The intimacy of Stevens allowed me to perform a lot better and held me more accountable — in a class of 10 or 15 people there’s no hiding,” he laughs. Downs jumped right into opportunities at Stevens, joining the civil engineering program, the lacrosse team and Delta Tau Delta. He studied abroad in Sydney, Australia, for a semester as well.

Looking back, he is particularly thankful to his professors for easing his transition to a new school and setting him up for his future career. “I can still name them all — [Leslie] Brunell, [Khondokar] Billah, [Hank] Dobbelaar — these are all teachers who really took an interest in you as a person and made sure you were successful afterwards,” says Downs. “Professor Dobbelaar was really instrumental in getting me where I am today … he recommended me for the CIAP [Construction Industry Advancement Program] scholarship, which was a five or $10,000 award, and got me some notoriety with local contractors.” Among those companies was J. Fletcher Creamer & Son (known colloquially as “Creamer”), an infrastructure company based in Hackensack, New Jersey, that hired Downs for a summer internship program in his junior year. His hard work — and Creamer’s emphasis on leadership development — have kept him with the company for more than 20 years, rising through the ranks from intern all the way to president. 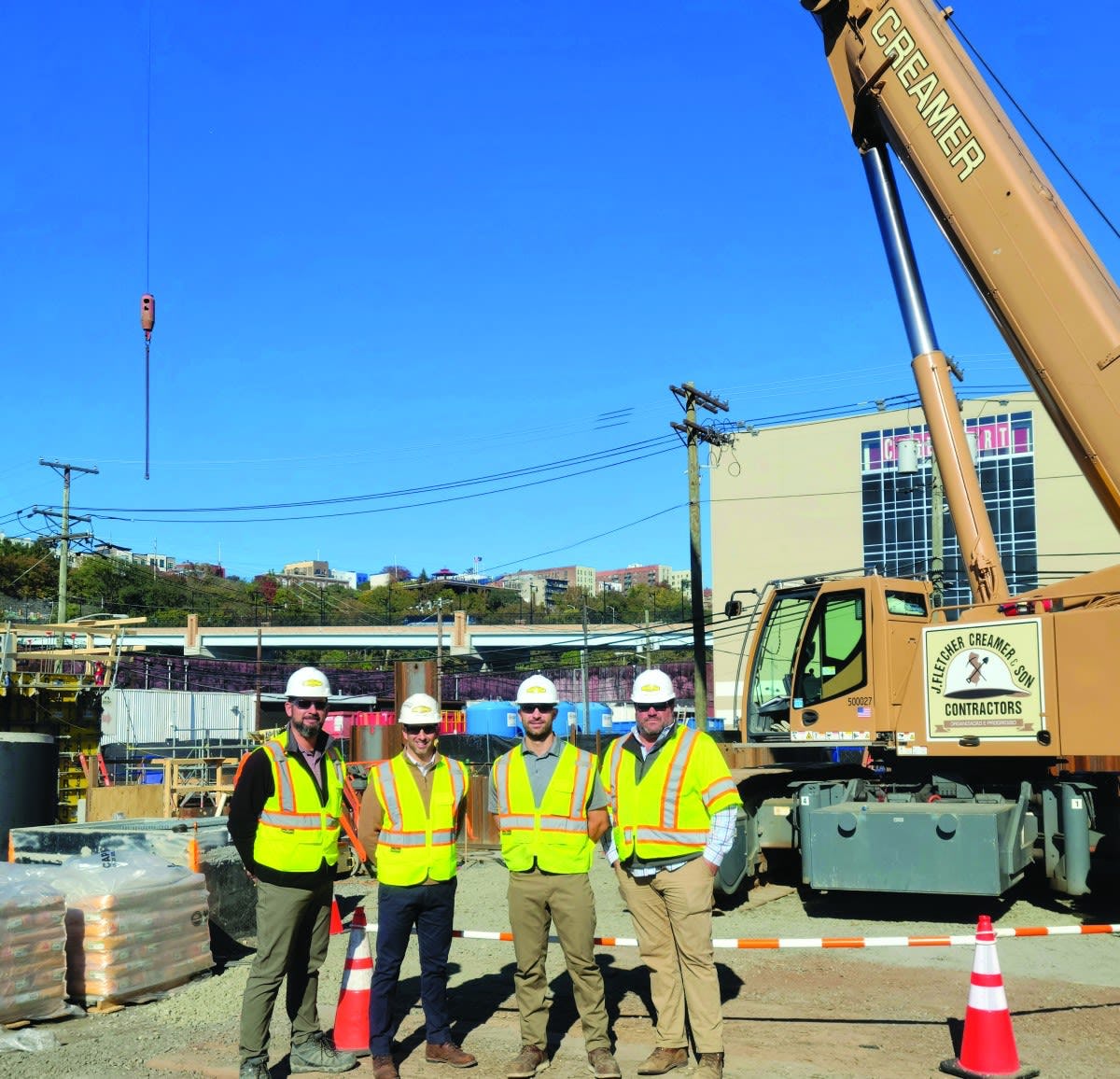 After graduation from Stevens, Downs began his first fulltime position with Creamer as a project engineer, working in the heavy highway sector. He and his team worked on numerous high-profile infrastructure projects in Northern New Jersey during that time, including the construction of a segment of Exit 15X on the New Jersey Turnpike and various roads and bridges around MetLife Stadium.

Among his favorite projects was the construction of a complicated underground electric transmission network through the cities of Bayonne and Elizabeth, New Jersey. “A particularly challenging aspect of the build was making the connection between Bayonne and Elizabeth under Newark Bay,” recalls Downs. “It necessitated twin horizontal direction drills each over a mile in length and exceeding 160 feet in depth from grade. We reamed 48˝ diameter holes through the three different formations of rock that converge under the bay,” he says. Anticipation mounted until the drills intersected, allowing crews to pull steel casings housing electrical conduits through the underwater tunnels.

Taking on the Top Job

After about a dozen years in the field, Downs became an area manager, and then vice president. In 2020, he ascended to the role of president. “Being in my current position has as much to do with hard work and perseverance as being in the right place, at the right time with the right organization. Having the right people around you to make you successful is key.” As president, he plans to carry on that legacy of support. “I spend a lot of my time focused on one of our most important assets, our people,” says Downs. With about 1,000 employees spread among six offices across three states, four sectors (utility, heavy and highway, traffic safety, and emergency response) and numerous projects up and down the East Coast, he has plenty to keep him busy.

In addition to planning for the future of his company, Downs is considering the future of the construction industry as a whole. The recent passage of the bipartisan Infrastructure Investment and Jobs Act provides funding for much-needed improvements to our country’s aging infrastructure — projects that require planning and execution by companies like Creamer. “What a lot of people don’t realize is the tremendous amount of design engineering and permitting that now has to occur before this funding can translate into boots on the ground and construction underway,” explains Downs. “So that can’t happen fast enough, but it’s certainly a giant leap forward from where we were.”

He’s also excited by the opportunities presented by New Jersey’s Energy Master Plan, a set of key strategies that the state will implement to achieve its target of 100% clean energy by 2050. “New Jersey is one of the states leading the pack here, not just in terms of the economic opportunity it creates for this area, but also the opportunity it affords our state in battling climate change,” says Downs.

With the belief that Creamer should lead by example in sustainability, Downs is helping to guide the company toward electronic records, the use of solar power in offices and a transition over time to hybrid and electric vehicles. Though he admits that these changes aren’t easy to implement in an industry that can be slow to adopt new technologies, he is pleased to see incremental progress.

Recruiting the Next Generation

As a proud alumnus with first-hand knowledge of Stevens’ rigorous curriculum, Downs is eager to hire promising young engineers who earn degrees from his alma mater. “Being in the construction industry for over 20 years now, you see that students coming out of Stevens are held in high regard. Stevens puts them in a really good position to be employed, especially in the tri-state area,” he says. Of the engineering positions at Creamer, about 10% are held by Stevens alumni.

One major differentiator he sees between Stevens graduates and others is Stevens’ encouragement of its students to complete the Fundamentals of Engineering (FE), an exam that must be passed to achieve professional licensure. “This test is extremely challenging,” says Downs, “I don’t think I would have found time to complete it post-graduation, and I see a lot of young engineers struggling with that.

“It was one of my proudest moments to earn the designation of Professional Engineer … when you’re sitting across the table from a client with the P.E. initials after your name, it brings you to a higher caliber, a higher level of respect in the conversation.”

While Downs still visits the Delt house with pizza and soda to talk about opportunities at Creamer, the company has also built a strong employment pipeline through Stevens’ co-op program. “Our interns work,” stresses Downs, “they’re not just in the office making copies.” The real-world experience offered through co-op sometimes turns into a fulltime job offer.

“It’s my responsibility to bring in the best people,” says Downs. “It’s been a real difference-maker for us having these young engineers get to know us as interns and then be ready to come on board as fulltime employees right after graduation.”