Advocating for Women in STEM On- and Off-Campus, Stevens Senior Seeks to Make Her Mark in Medical Technologies 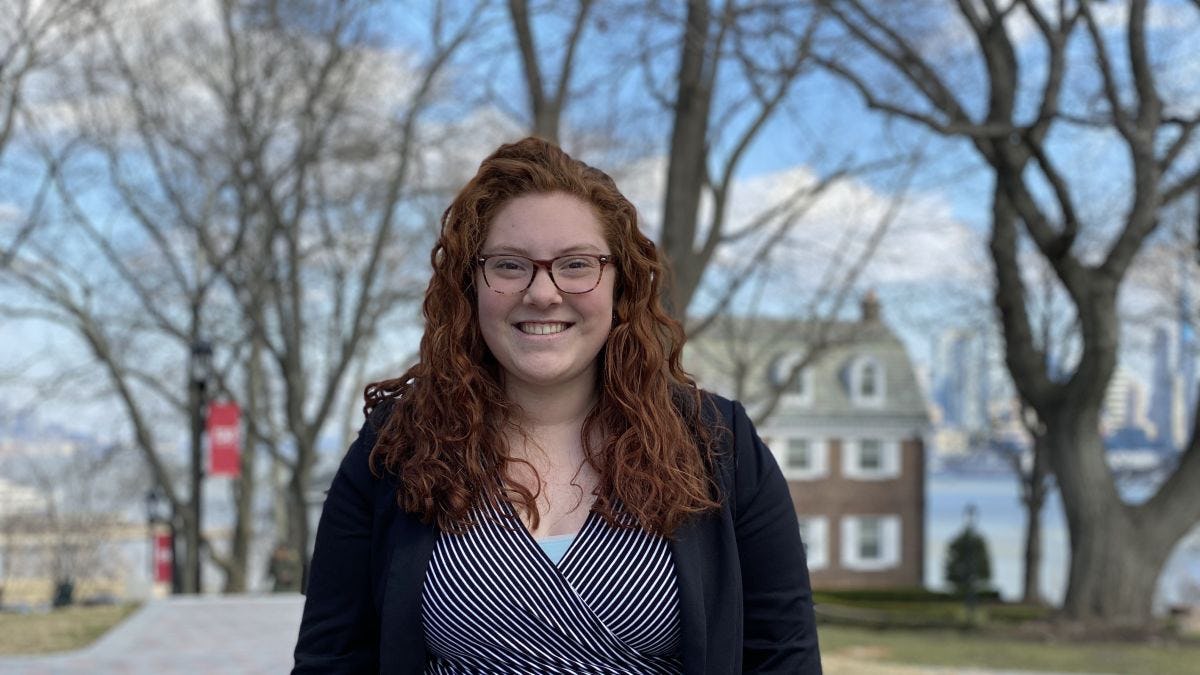 Emily Sneddon ’20 is a woman pursuing a mechanical engineering degree — one who doesn’t turn a blind eye to the gender disparity that still exists in STEM disciplines and industries.

“Whether it’s saying, ‘hey come sit with me, we can work on this together,’ or being willing to share a work experience that was maybe negative and helping other people get through that same sort of thing, one of my priorities here is making sure that nobody feels like they’re alone in something.”

It’s the kind of empathy and social awareness that the Pinnacle Scholar brings to her role as president of the Stevens section of the Society of Women Engineers (SWE), an organization with deep Stevens roots (Stevens alumna Beatrice Alice Hicks M.S. '49 co-founded SWE and became its first president in 1950, a year after earning a master's in physics from Stevens).

Developing the next generation of STEM thinkers, giving back

Sneddon became involved with SWE during her second year at Stevens as the group’s co-chair of K-12 outreach, organizing activities and campus events to connect and engage girls to engineering and STEM career pathways.

Inspiring young minds to engage in science and engineering is a personal passion of Sneddon's. Growing up with a father who is also a mechanical engineer, the Sayville, Long Island native was always aware of the importance of early exposure to hands-on STEM activities in nurturing curiosity and building confidence.

“He always encouraged me to help him with things when he was working on a project in the basement. And I would always take things apart and put them back together. So I had an early introduction to engineering.” 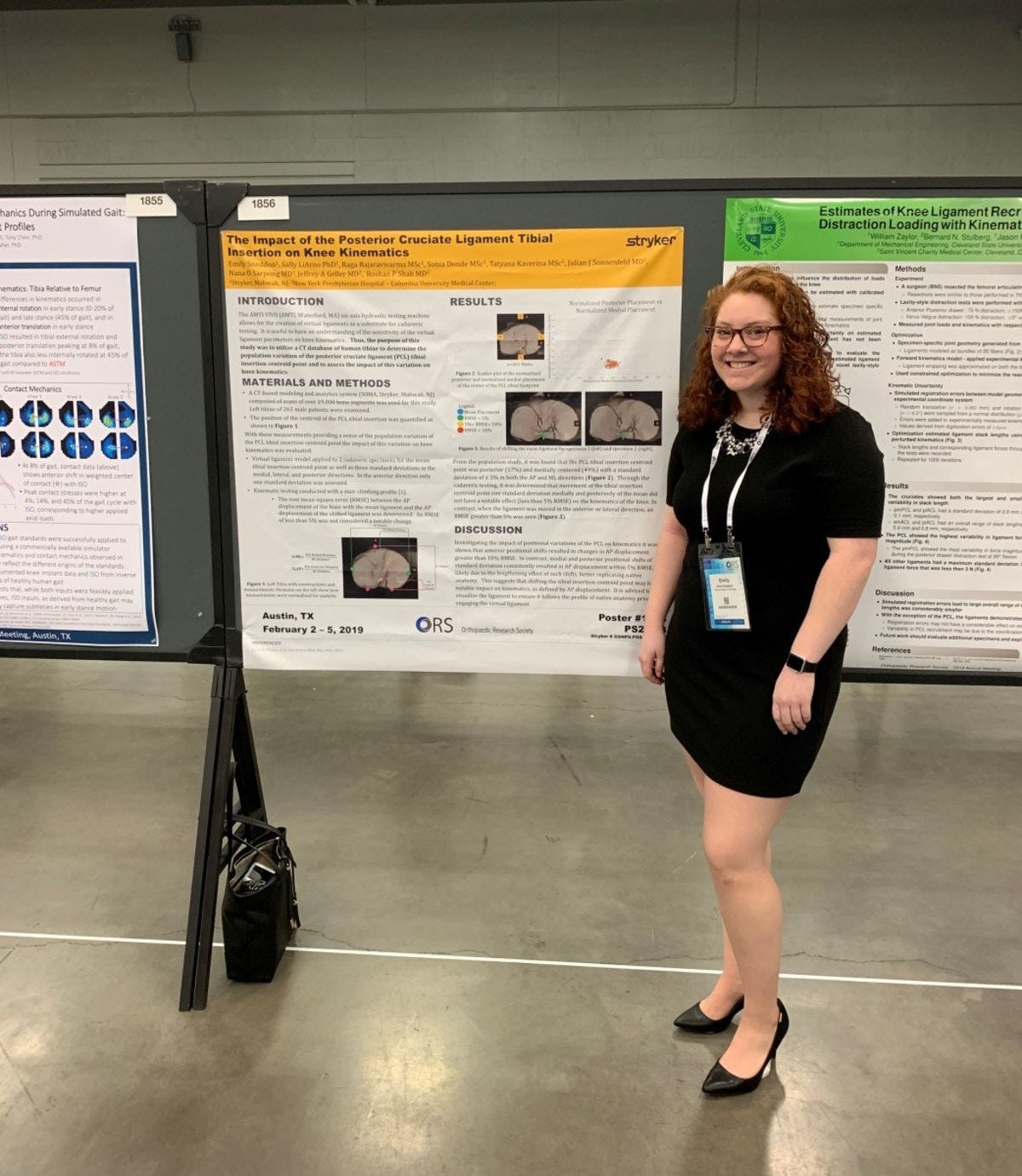 At the same time, Sneddon’s personal experience as a Type 1 diabetic fostered a profound appreciation for life-changing scientific and technological innovations. Her own insulin pump serves as a constant reminder and inspiration.

“A big reason why I want to go into the medical device field is because somebody made a huge impact on my life and the lives of a million other Type 1 diabetics. And I want to do that for someone else.”

Professionally, Sneddon is making great strides toward that goal. She has already completed two summer internships at New Jersey-based Stryker, a global leader in medical device technology, with plans for a third stint this summer before pursuing graduate studies.

During her previous internships in the research and development arm at Stryker, Sneddon put in at least 40 hours per week on work she found so meaningful that she often lost track of time.

“I found myself staying an extra hour or bringing my computer home, not that I was ever asked to do that, but the work was so interesting and I felt like I was making an impact.”

The opportunities at Stryker exposed Sneddon to a broad range of unique professional experiences.

“I’ve sat in on surgeon meetings, gone to cadaver labs and worked on a project that was published in the medical journal, The Knee. I also attended the Orthopaedic Research Society Conference last year in Austin where I had the chance to present my research poster.”

The power of a great mentor

Stryker was a dream internship for Sneddon in other ways. It was there that Sneddon was connected to a mentor who influenced her work and career in direct and indirect ways.

“My manager at Stryker, Sally LiArno, gave me that helping hand when I needed it but would also take a step back to let me figure things out on my own. She also gave me opportunities like going to that conference and being included on big papers that get published.”

It’s a relationship that has extended beyond her time at Stryker.

“She is someone that I really look up to. She still checks in with me all the time to see how things are going. I think that everyone needs someone like that.”

Sneddon’s campus activities have centered on being that “someone” for other undergraduate women at Stevens so that they too can benefit from the same opportunities that were afforded to her. Case in point: finding ways to make it possible for others to attend the annual SWE conference, attended by thousands of students and hundreds of companies looking to recruit. 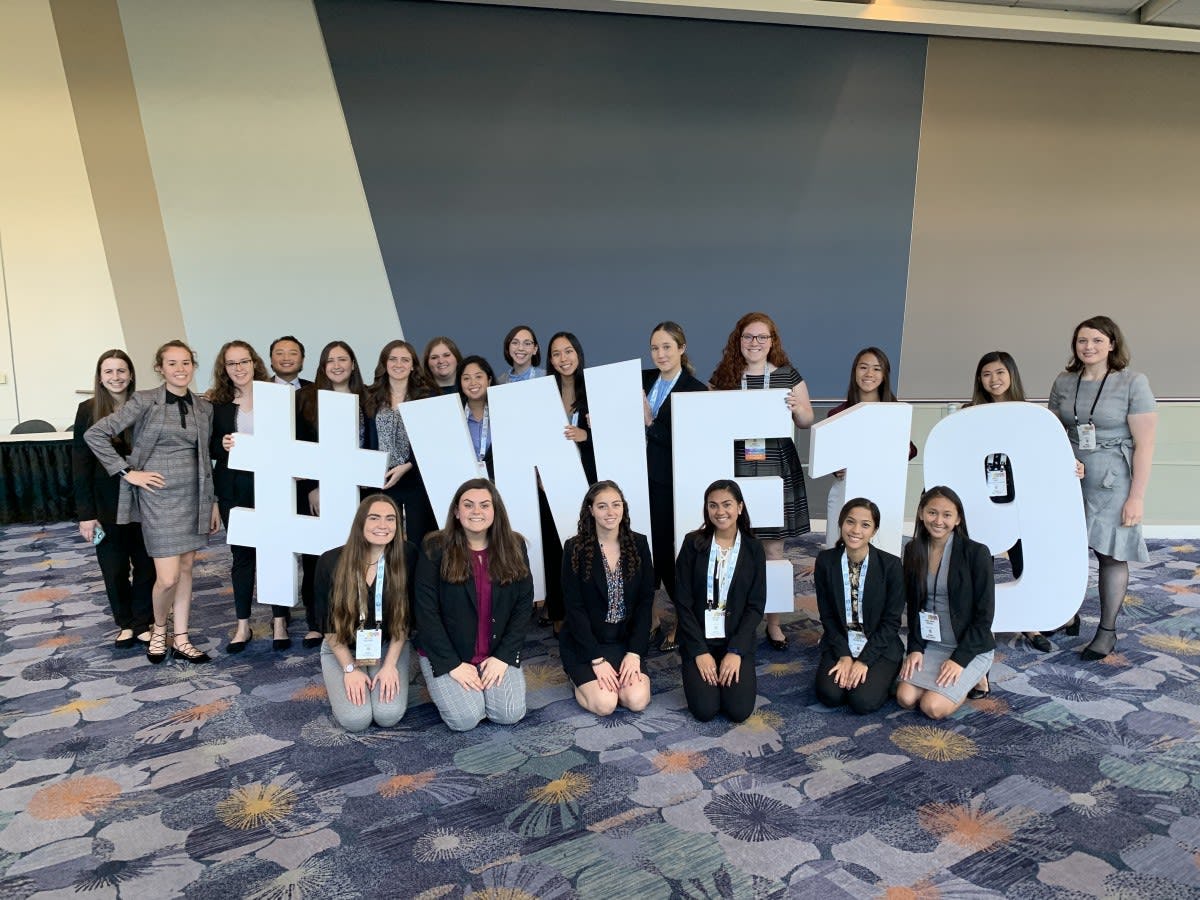 WE19, the Society of Women Engineers Annual Conference in Anaheim, California, November 2019

“I’m really proud of how we were able to send 21 people all the way to Anaheim, California last year. Different departments on campus helped support that effort, as well as corporate sponsors such as ExxonMobil and BP,” she said.

Students who went to the conference came back with interviews and job offers, she says, some with three or four job offers.

“Big companies are offering jobs at that conference, places like Lockheed Martin, GE Aviation. For me, it was not only an incredible experience getting to meet everyone I met there but also getting to support other people to get there.”

In her last semester before graduation, Sneddon is working on her senior design project – a thermal electric medical monitoring device that could identify infections before they escalate to the level of potentially deadly septic shock. She will have a chance to present that work May 1 at Stevens' Annual Innovation Expo.

After graduating with her bachelor's in May, Sneddon will return to Stryker for a third internship over the summer – then to Stevens in the fall to pursue a master’s in mechanical engineering.

“My four years have been incredible. I think that any college is what you make of it. And Stevens is no different than that, but I think that it goes a step farther. There are people all around looking to actively get you involved in things. People were reaching out to me to get involved in SWE. And that little push in the right direction really started me on a path that I never would have been on.”