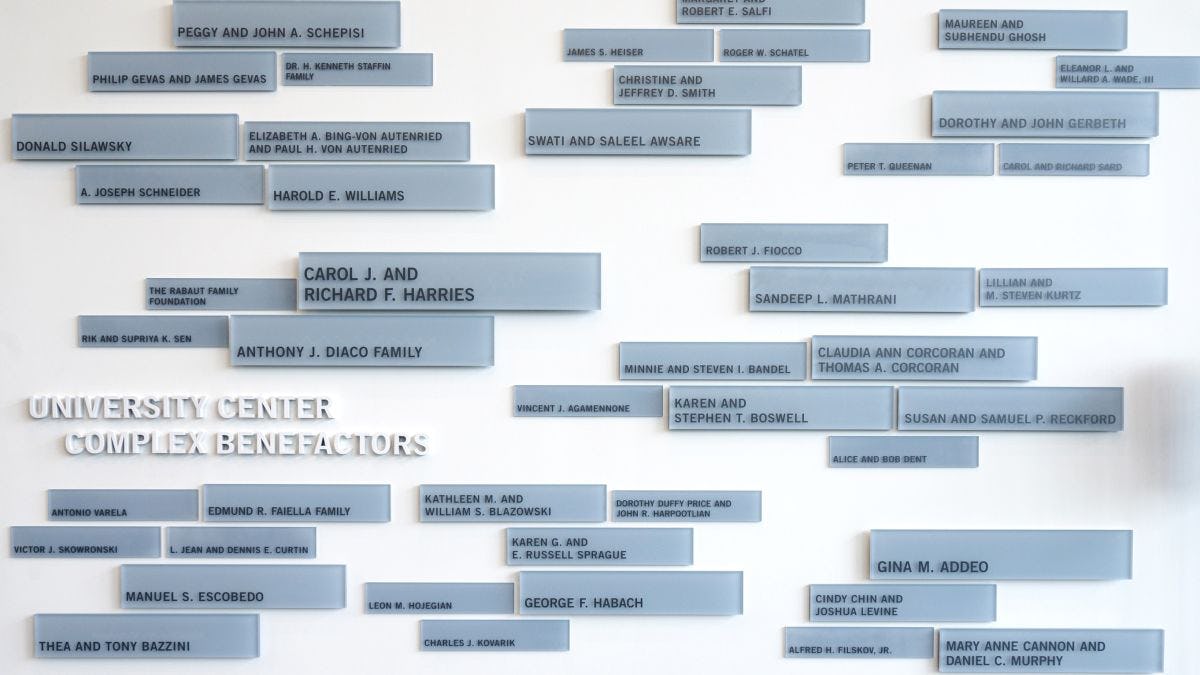 The names of UCC’s donors are displayed prominently on the wall in the building’s grand commons. Support from alumni and friends contributed to the creation of 28 named spaces throughout the facility.
Jeff Vock

The most transformative construction project in Stevens’ 152-year history is the story of communities coming together to do something truly extraordinary: Stevens, its neighbors and the City of Hoboken. Construction, architectural and planning professionals. Students and staff, advising the professionals on a building where they’ll live, study, share meals and embrace college life.

Mostly, the University Center Complex is the story of a community of philanthropists, many of them alumni, who stepped up to support this project and the future of Stevens. With their generosity, this brand-new facility opened this fall to not only close to 1,000 student residents, but also to the entire Stevens community.

The essential role of donors in making this historic project a reality is enshrined as soon as you enter the building. A donor wall greets visitors on the main floor of the University Center and lists the project’s major benefactors. Most have spaces throughout the UCC — from a residential tower to a skybridge passageway, from student lounges to a café — named in their honor.

“The university now has a magnificent and vital center — a true hub of campus life that will grow Stevens pride and our connection to each other,” says Laura Rose, Stevens’ vice president for Development and Alumni Engagement. “And the generosity of our alumni and friends has made this possible.”

Support from a total of 88 donors was multi-generational, with alumni from the Class of 1946 to the Class of 2021, as well as generous contributions from friends, faculty and staff. 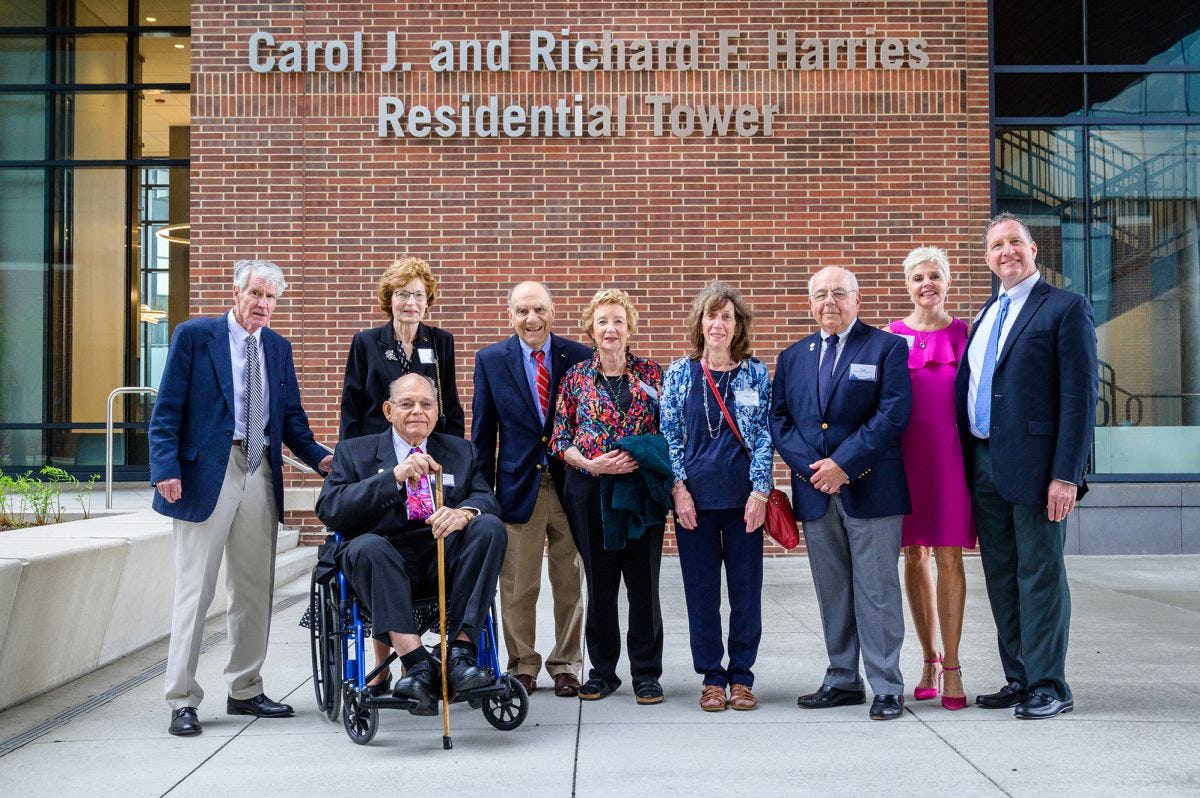 Carol and Richard Harries ’58, second from left and front, gather with donors and friends before the new University Center Complex residential tower named to honor the Harries' historic gift to the project.Among the benefactors were Carol and Richard Harries ’58, whose bequest — the largest single gift in Stevens’ history — truly propelled the University Center Complex. The complex’s 20-story Carol J. and Richard F. Harries Residential Tower is named in their honor.

Harries is a longtime engineering executive whose development firm contributed work for more than 900 projects, including such iconic Newark, New Jersey, buildings as the Prudential Financial building and the Anheuser-Busch brewery.

In addition to his extraordinary philanthropy and the financial support he inspired from friends and alumni, Harries offered valuable professional advice during the design phase of the University Center Complex.

A group of Stevens philanthropists joined Harries in the quest to give students and the university community the type of world-class facility they need and deserve. These benefactors often cite the quality education they received at Stevens — and their faith in the university’s future — with inspiring their generosity to the University Center Complex. 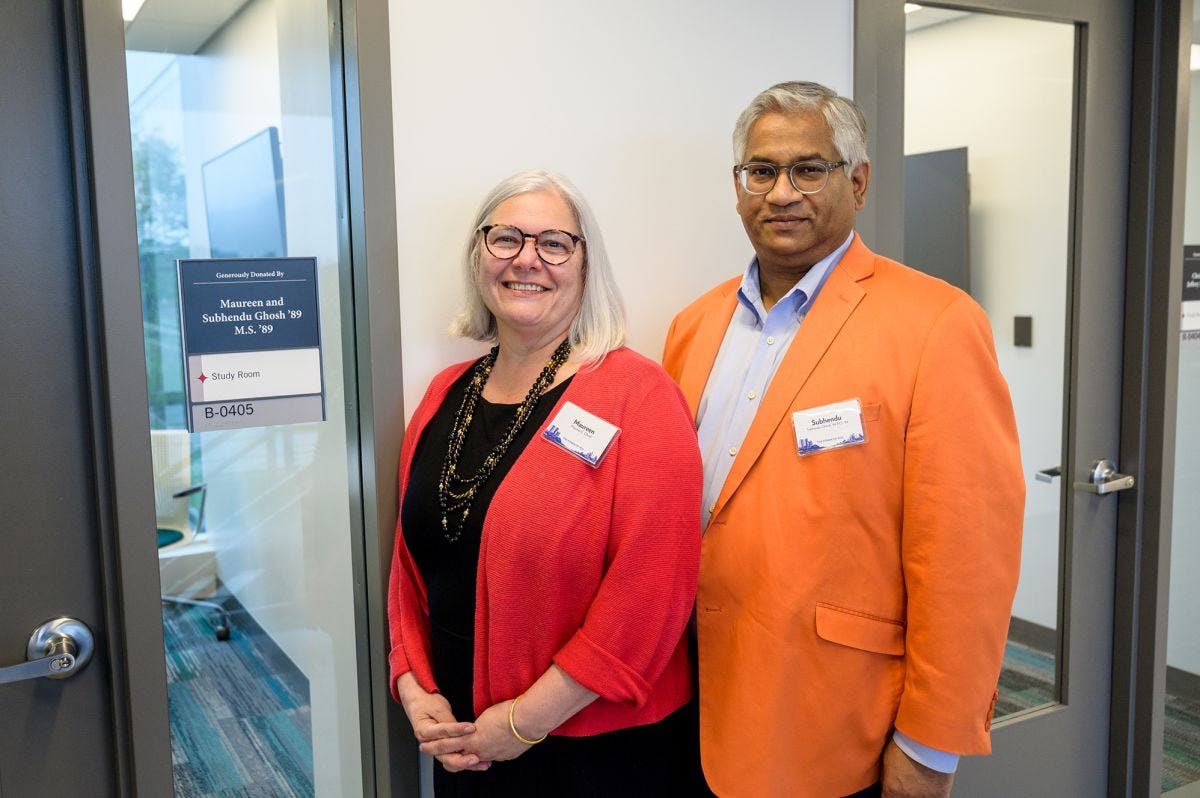 Subhendu Ghosh ’89 M.S. ’89 outside the University Center Complex study room named in honor of him and his wife, Maureen, in recognition of their generous support of the UCC project. Jeff VockSubhendu Ghosh ’89 M.S. ’89 was an international student born in India and living in Senegal when he attended Stevens. He recalls a welcoming environment, a well-rounded engineering education and a flexibility that allowed him to create his own area of study, combining computer engineering and technology management.

Inspired by the dramatic progress Stevens has made under President Nariman Farvardin’s leadership over the past decade and wanting to give back, he decided to support the University Center Complex. He envisions a true home for all students — including international students — to come together and feel a sense of connectedness with one another.

Thanks to a generous donation from Ghosh and his wife, Maureen, the Maureen and Subhendu Ghosh ’89 M.S. ’89 Study Room has opened as a place for quiet work and collaboration.

“It allows them to succeed,” Ghosh says. “There shouldn’t be anything preventing students from studying, from doing research or doing creative works.” 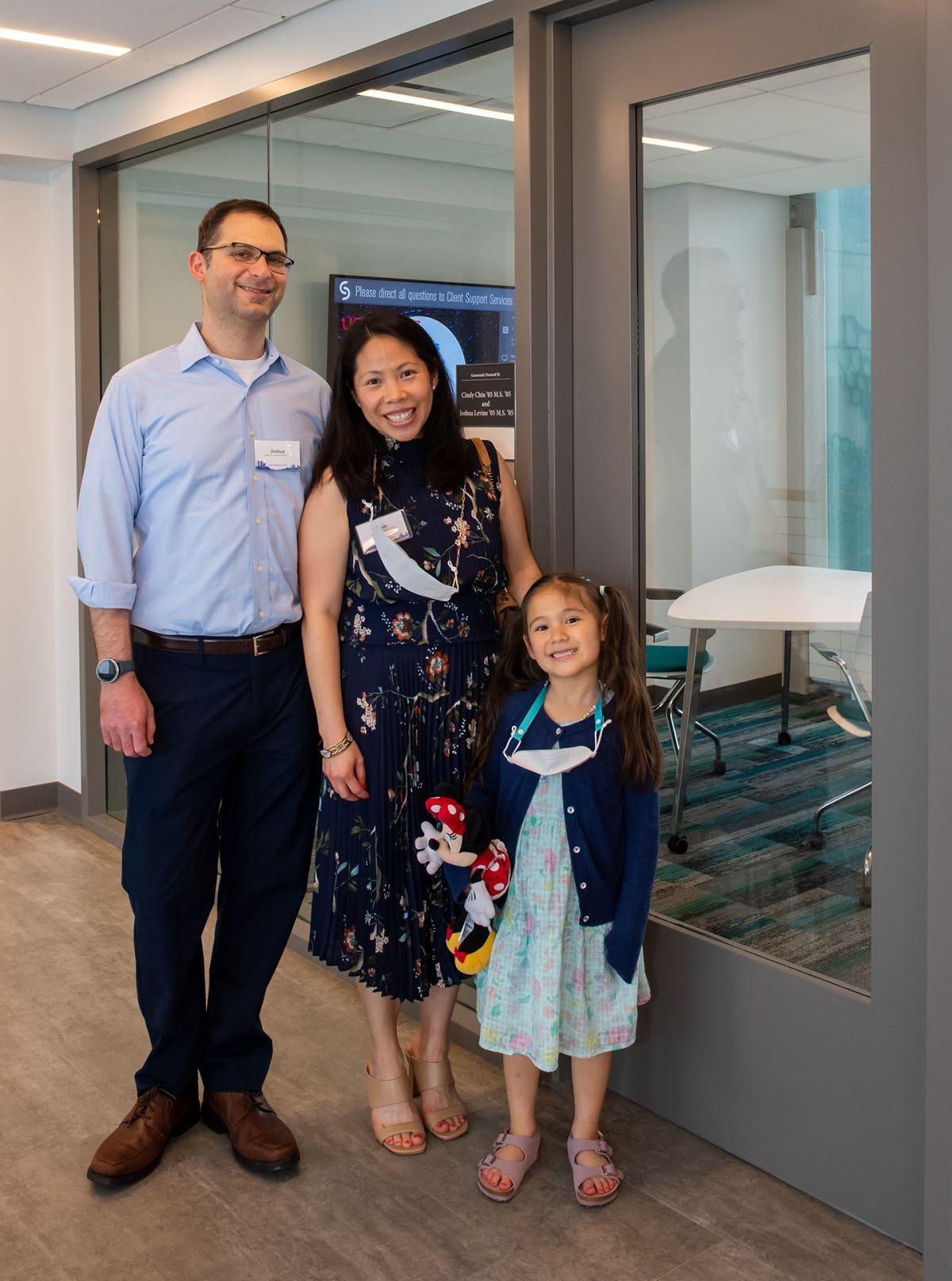 “The UCC is a state-of-the-art building that transforms the student experience,” Chin and Levine say.

“Stevens is such a special place for us, and any chance to support the students, we’re eager to play a role.” 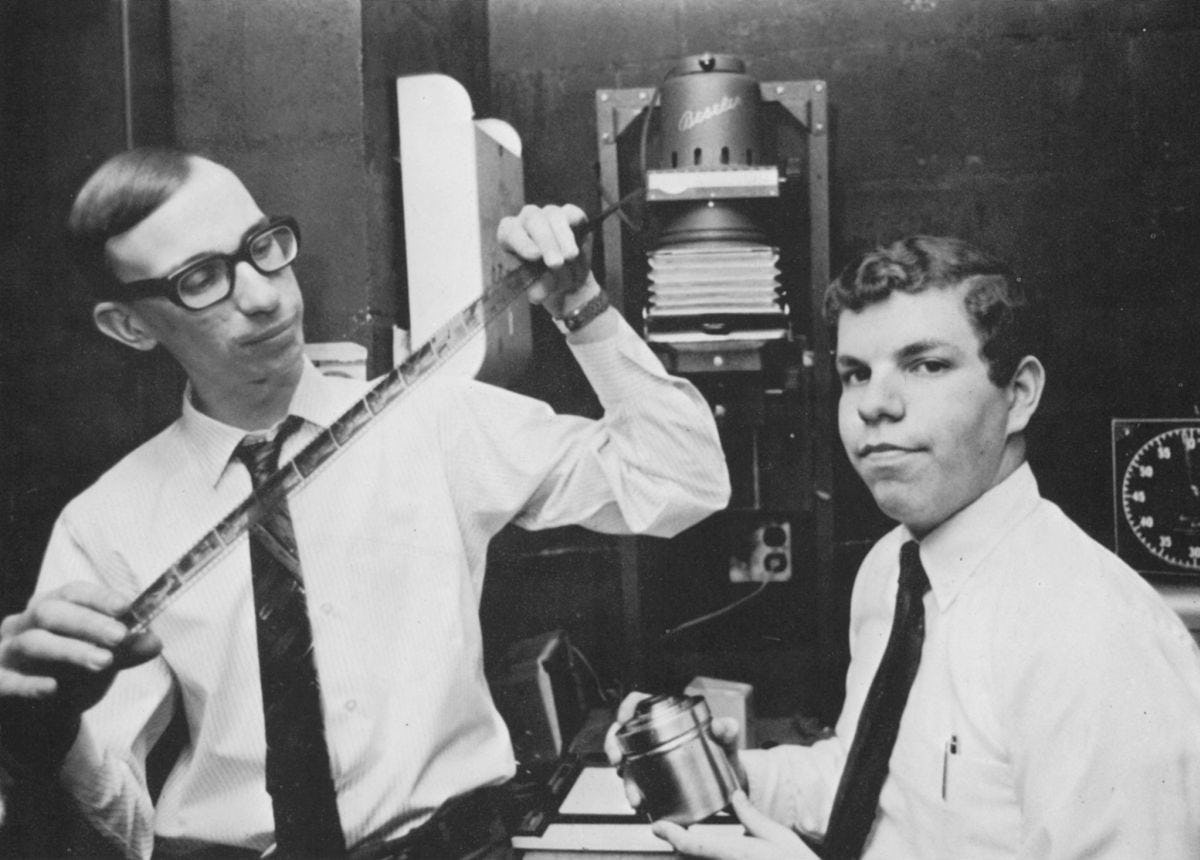 Donald Silawsky ’69 M.Eng. ’71, left, has fond memories of working on The Stute during his time at Stevens. He supported new offices in the UCC for the student newspaper which means so much to him.Photo courtesy of The Link An unforgettable student experience inspired Donald Silawsky ’69 M.Eng. ’71 to support the University Center Complex and, specifically, its location for new offices of The Stute. He remembers his work on the student newspaper of some 53 years ago like it was yesterday.

His work with The Stute, where he went from typist to photo editor to business manager, helped him discover his interest in activities very different from the technical subjects of the classrooms and labs — activities that wound up being critical elements in both his professional and personal life. He took pride in his accomplishments with this iconic publication that has been around for generations.

“I feel an intense connection and immense gratitude to Stevens; it literally made my life,” Silawsky says.

Today, his name appears outside The Stute office along with a second layout room it shares with The Link yearbook. When students see his name on the door 50 years from now, maybe they’ll be inspired to support Stevens’ student journalists too, he says.

Silawsky may even visit The Stute staff some evening when they’re putting out their weekly edition, to see what has changed — and what hasn’t — over half a century.

“If food is still ordered after the paper is wrapped up for the week — as we used to do — pizza will be on me,” he says.