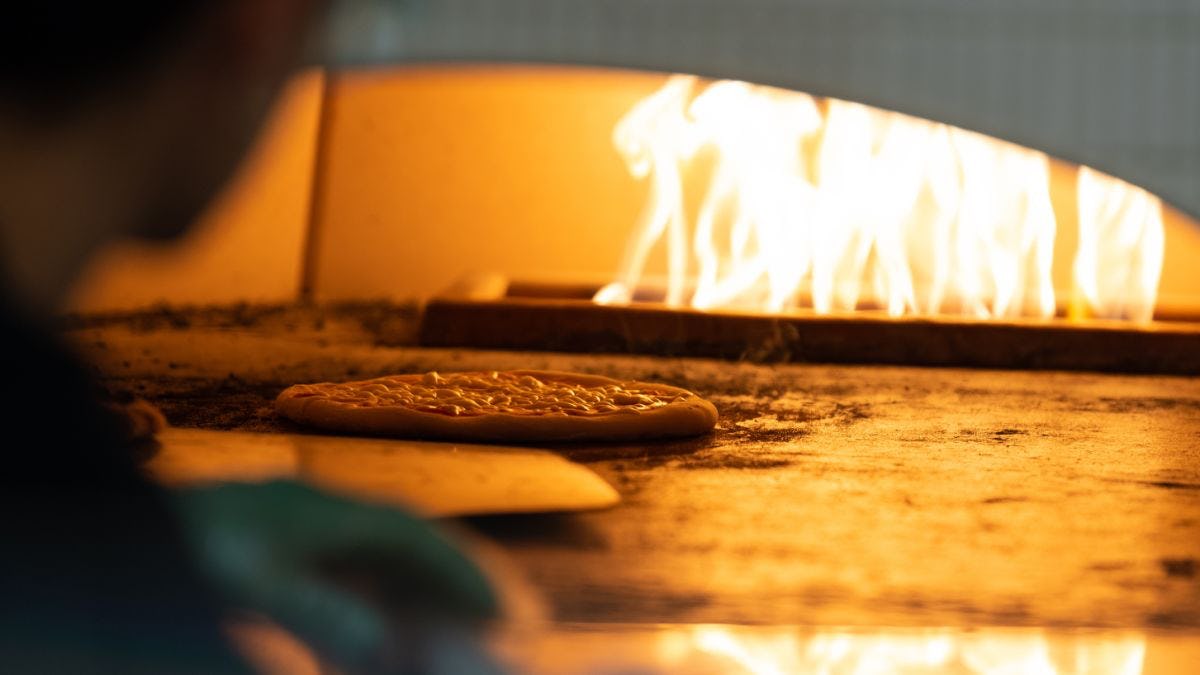 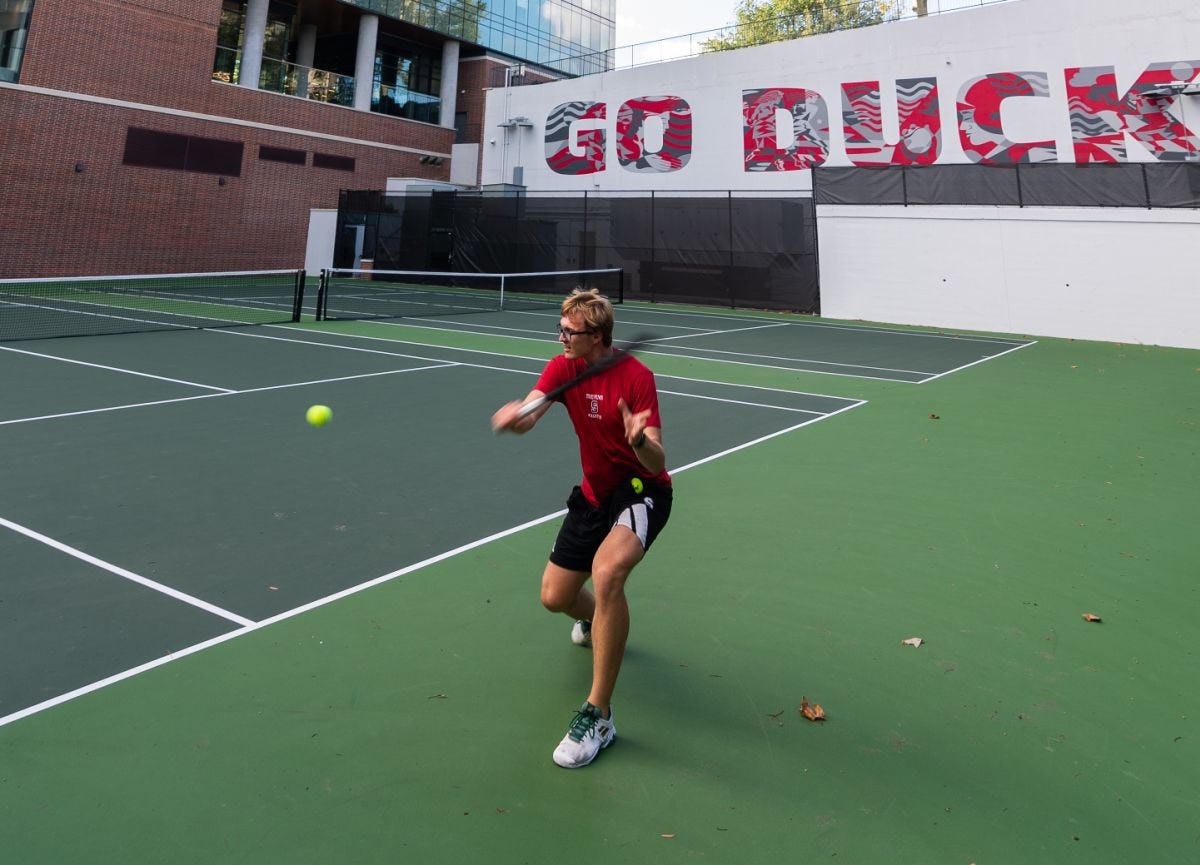 Two brand-new tennis courts with Hudson River views invite the Stevens community to sharpen their serves in style. Accessible from the back patio of the building, the courts are constructed from top-of-the-line materials to ensure durability and feature overhead lighting (controlled by Athletics staff with the tap of an app) to allow for nighttime play. While the courts will be reserved for varsity practices during certain times of the year, students, faculty and staff can also enjoy them on a recreational basis. 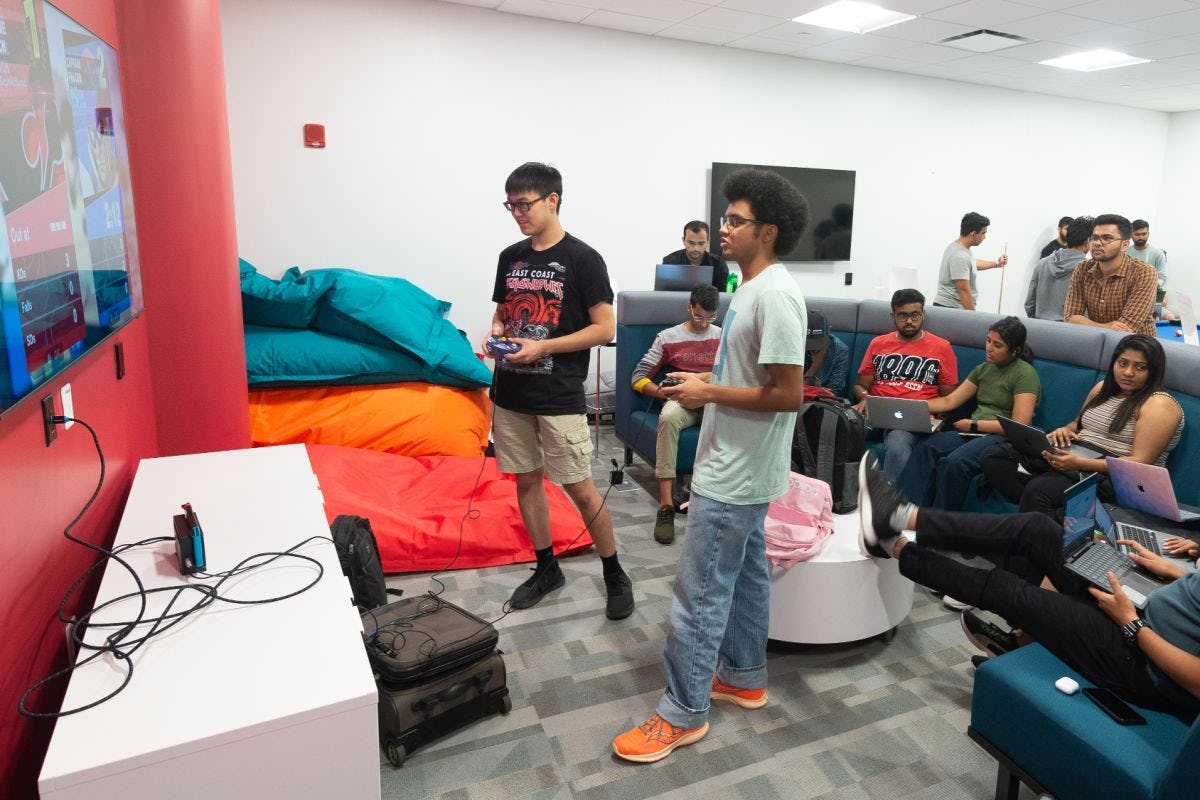 Stevens students love gaming! The Computer and Console Gaming Society (known as C2GS) has some 400 members and is one of the largest student clubs on campus. They meet in the large Babbio 122 lecture hall and spill into other Babbio classrooms every Thursday for gaming night, says C2GS E-board member Thomas Wang ’23. But among Stevens gamers are also devotees to Rock Band, Dungeons and Dragons, and various board games.

So, when Vice President for Student Affairs Sara Klein approached Wang and other C2GS members with questions on how to create a game room inside the UCC, they were thrilled — and had very specific ideas. They needed a room that would meet diverse gaming needs but also be casual and relaxed.

“Since it’s built for us, it’s more inviting, ” Wang says. Wang and his fellow C2GS members advised on everything for the game room from adding round tables (better for board games), desks with leaning tables, a comfortable lounge area with a winding couch for relaxed gaming before a giant monitor, even cushy gaming chairs that stretch across the floor and position the gamer in a comfortable pose.

Though C2GS was involved in the room’s design, the space is for everyone, not just club members. In addition to video games, the beloved foosball table was moved from Jacobus Hall, plus there’s a pool table and a closet filled with board games.

“Gaming is the launchpad for lifelong friendships,” Wang says. 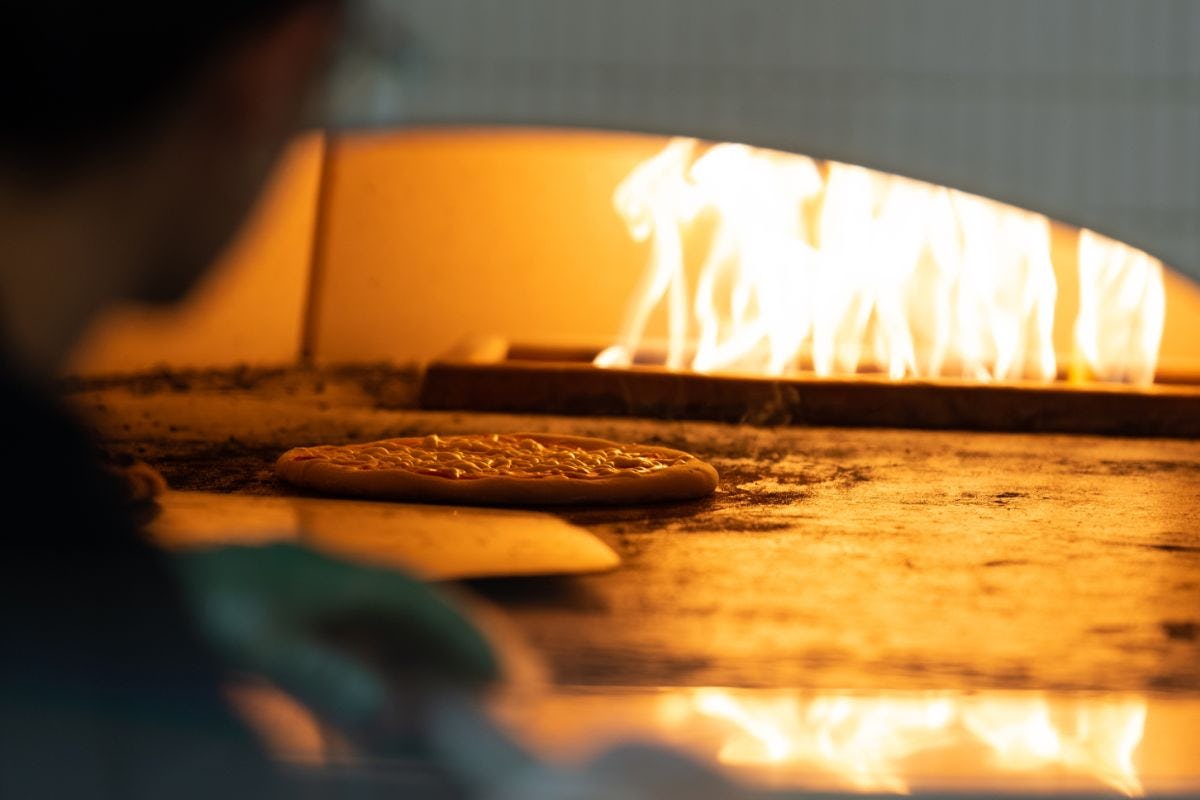 The sleek, subway-tiled, free-standing pizza oven is both an architectural feature of the Marketplace and a symbol of how seriously Stevens takes its slices. According to Dining Services’ annual survey, pizza is students’ number one cuisine of choice and satisfaction has long been high with the quality of the pies produced at Pierce Dining Hall. The new oven bakes personal pizzas made to order with a wide selection of toppings. 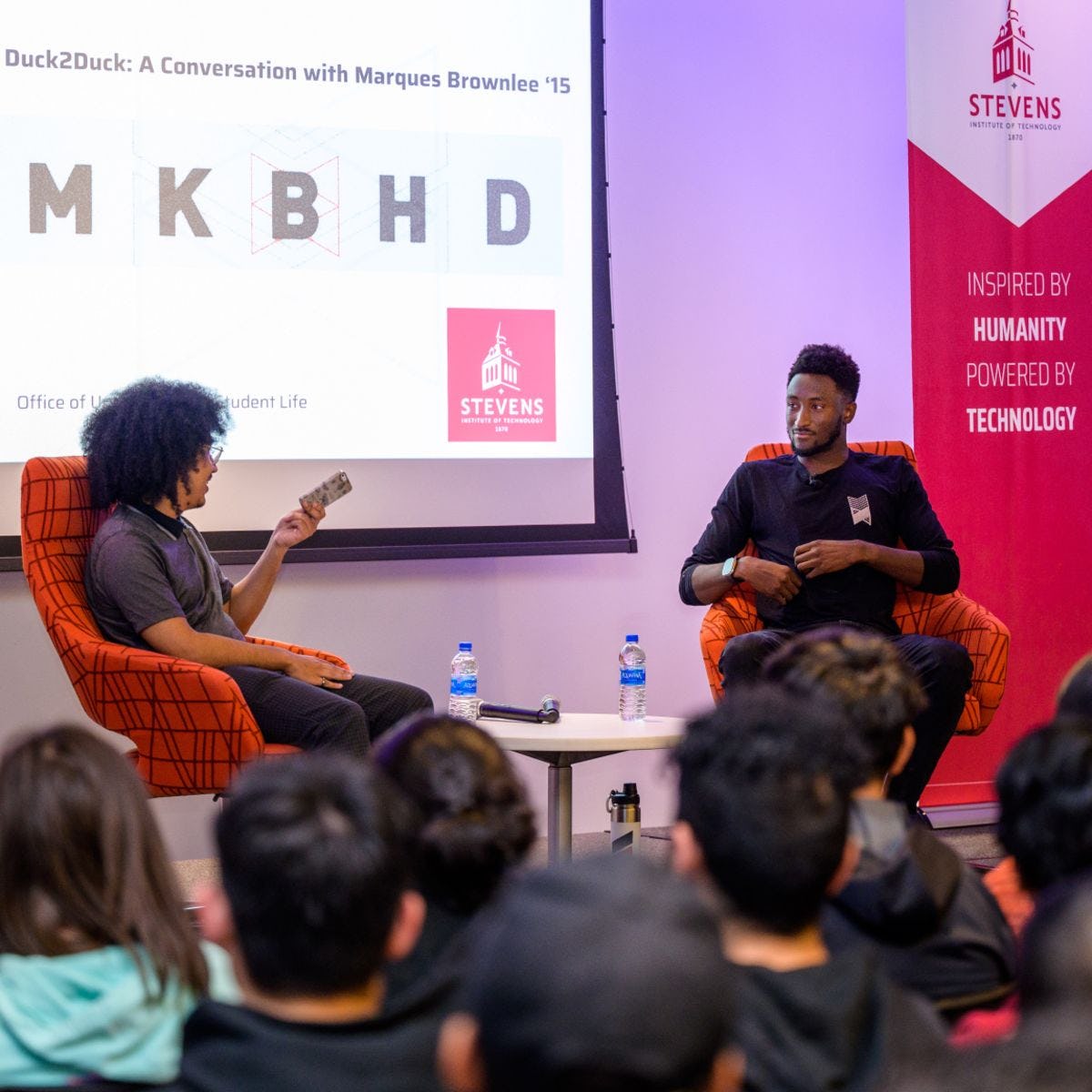 Who better to fully launch the UCC’s state-of-the-art, 4,500-square-foot “Tech Flex” space than MKBHD: Marques Brownlee ’15, the megastar media influencer and entrepreneur? Brownlee — with more than 16 million YouTube subscribers to his tech review videos, among his other tech ventures — headlined “Duck2Duck”: a dialogue with students about his incredible journey, among other topics, on September 28. And he did it in the UCC’s cavernous new multi-purpose event space, a venue which seats 400 and is equipped with a suite of tech features found nowhere else on campus. There’s a retractable projector screen on one wall, a ceiling-mounted projector, three large flat-screen monitors, ceiling-mounted speakers, pre-programmed lighting and an assistive listening system for the hard of hearing. The room can be divided into three separate spaces, to host even more student, alumni and university events. Students envision future art exhibitions and musical performances. 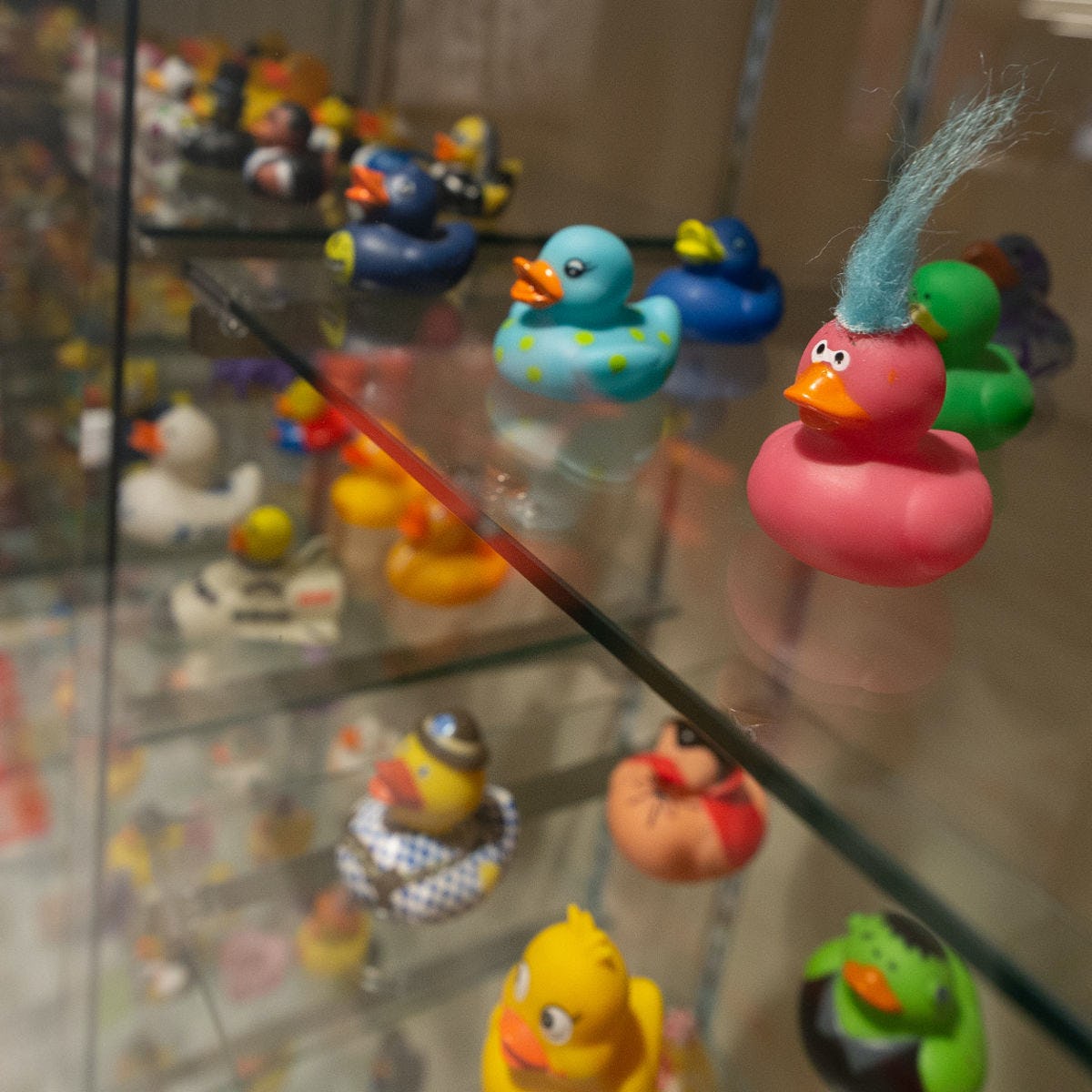 Jane Gilbarty was a beloved, longtime member of the Office of Student Affairs who retired in 2020 after 20 years with Stevens. Her job title may have been senior administrative assistant, but to the many students whom she helped over the years, she was the “Duck Lady.” Jane joyfully displayed mini rubber ducks all across her desk, around her computer and office space on the 10th floor of the Howe Center. Collected over many years, donated by students, staff, alumni and visitors, the toy ducks are of various colors and costumes, often mementos of happy campus events. Now, they fill the Museum of Ducks, on permanent display outside the Student Life offices at the UCC. The display case holds about 130 ducks — just a portion of the collection.