About the Davidson Laboratory

Founded in 1935, the Davidson Laboratory is one of the largest and most widely renowned hydrodynamic and ocean engineering research facilities in the nation, conducting physical experiments on marine craft and marine and coastal structures to determine how they interact with their environment.

The Lab's unique facilities and special expertise are utilized daily by more than 4,000 marine, aerospace and defense industry leaders, federal and municipal agencies, and a host of private and academic research groups.

The history of the Davidson Laboratory is closely intertwined with that of the nation, and the history of maritime commerce and national defense.

Experiments at Stevens began in May 1931. A professor of mechanical engineering with a passion for sailing, Kenneth S.M. Davidson, would use the Stevens swimming pool at to study scale models of ships. At the time, there were only two tow tank facilities available in the entire U.S. where scale models of maritime vessels could be evaluated. 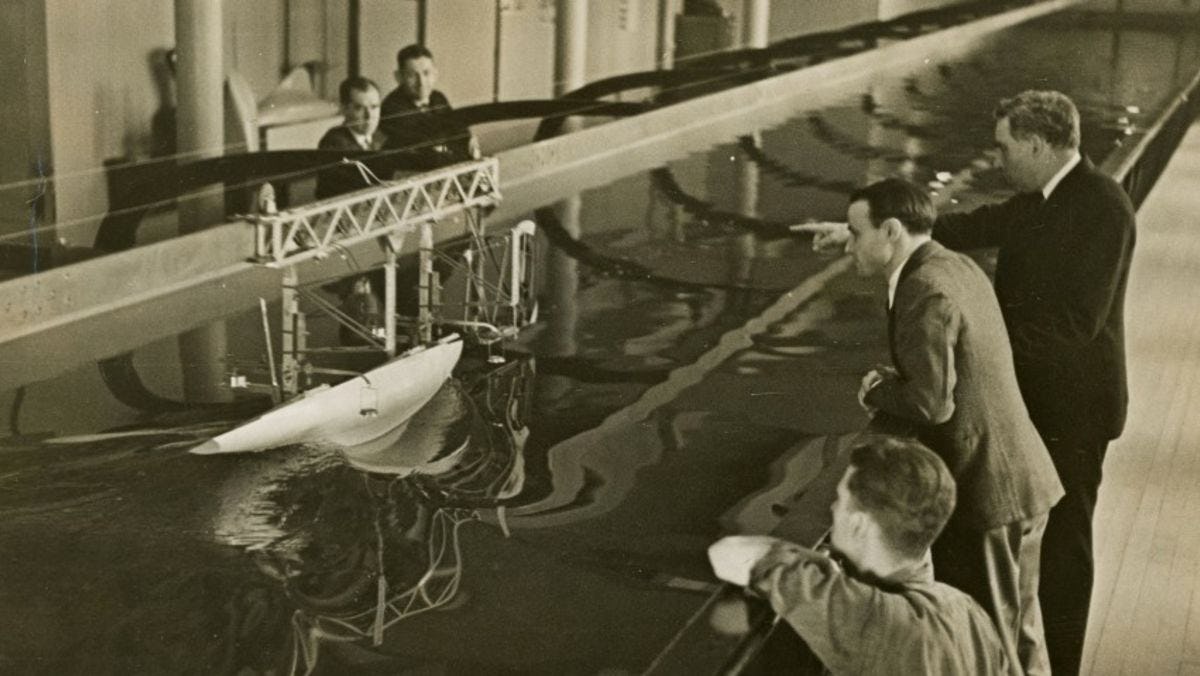 Davidson and his Stevens colleagues determined to create a third. Established in 1935, the largest and oldest lab of its kind, the Davidson Laboratory towing tank was constructed and opened as the Experimental Towing Tank. Measuring 101 feet long, with a semi-circular cross-section with a surface width of 9 feet and 4½ feet of depth, it was primarily used to evaluate yacht designs.

In April of 1936, the lab was the first facility in the nation used to design and test a racing yacht that would begin the facility’s long history of achievement in the America’s Cup race: the J boat Ranger, which won the America's Cup in 1937, bringing national attention to Stevens. 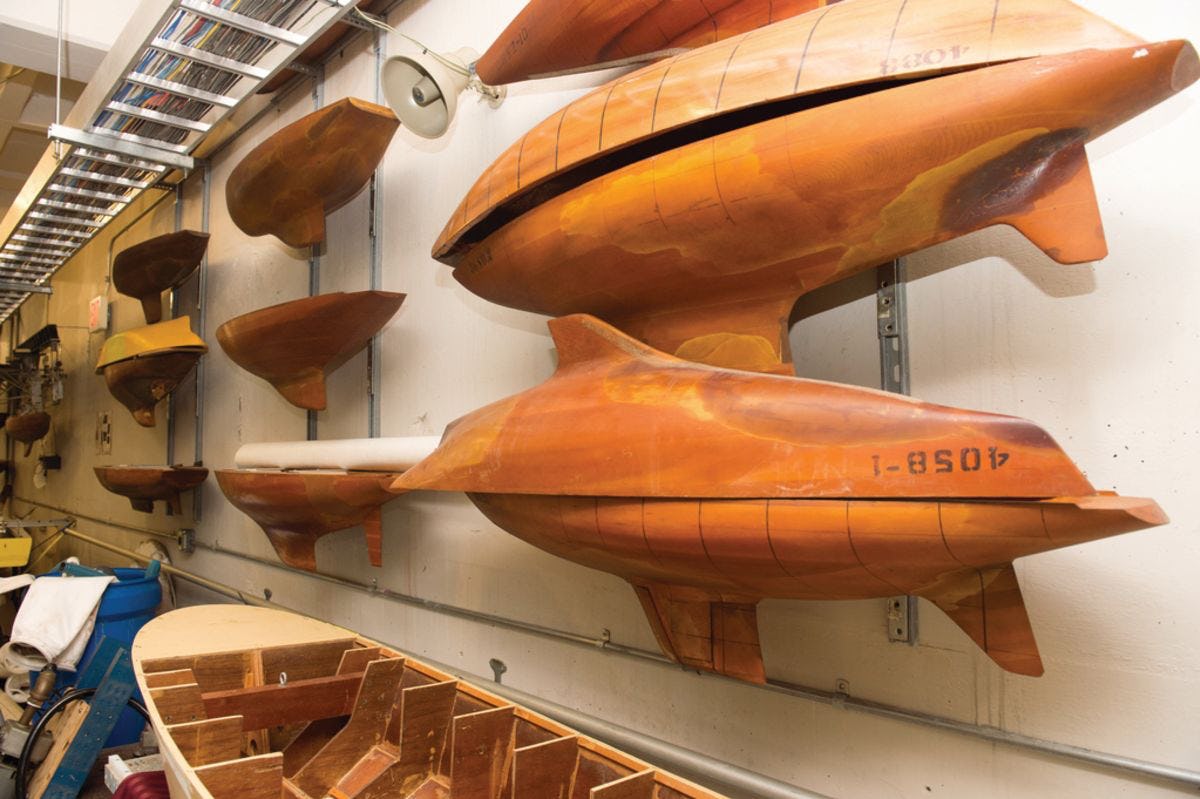 That victory led to a string of commissions testing vessels ranging from ferry craft and seaplane hulls to large, destroyer-type ships.

The Experimental Towing Tank later proved critical during World War II, when the lab was almost entirely devoted to supporting the American war effort. As a result of U-boat attacks on merchant vessels, Professor Davidson submitted a proposal to the National Defense Research Committee of the Office of Scientific Research and Development for construction of a maneuvering basin on Hudson Street, at the western edge of the Stevens campus.

Construction on this basin was completed in June of 1942. Attention then turned to the need to better understand seaplane dynamics. That need, coupled with the fact that the first towing tank was now in almost continuous operation, led Stevens to propose the construction of the world’s most advanced and highest-speed towing tank. This facility, measuring 313 feet long, 12 feet wide and 6 feet deep, was completed in less than 9 months, opening in November 1944. 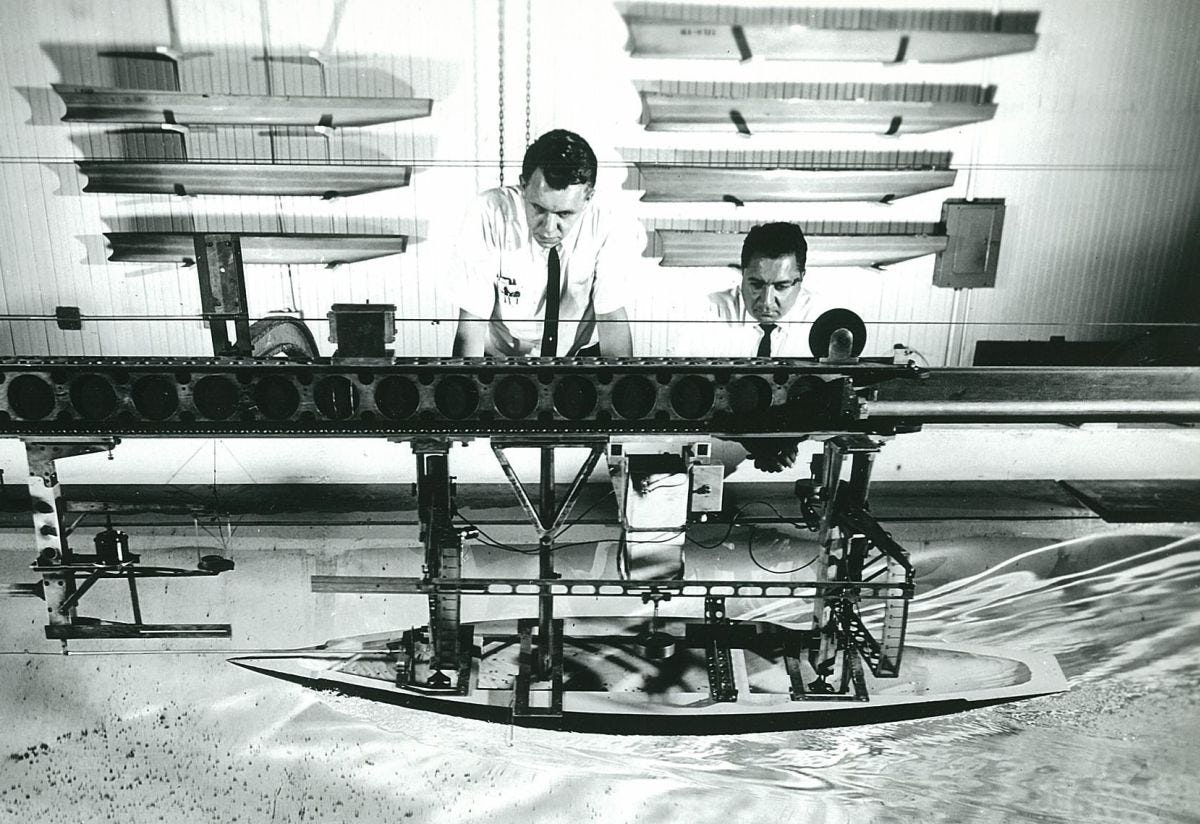 Daniel Savitsky M.S. ’52, right, and former Davidson Laboratory director John Breslin test a model of the yacht Constellation in 1964. When the war ended, work at the lab continued — sometimes even including research on land vehicles. Davidson was a primary player in the design of the first modern submarine (the Albacore), as well as continued testing on sailing yachts and other maritime craft. In the 1970s and 1980s, the Lab's facilities were even used to test NASA's lunar rover.

Today, the laboratory also works closely with the Department of Homeland Security and the National Oceanic and Atmospheric Administration (NOAA) on projects including sophisticated modeling and forecasting of wind, tide, current and wave conditions to better assist preparation for and response to storms, floods, accidents, and other emergencies on water.

In 2012, the Davidson Laboratory provided essential forecast models during Hurricane Sandy for flood levels and coastal conditions in and around the New Jersey, New York metro area. 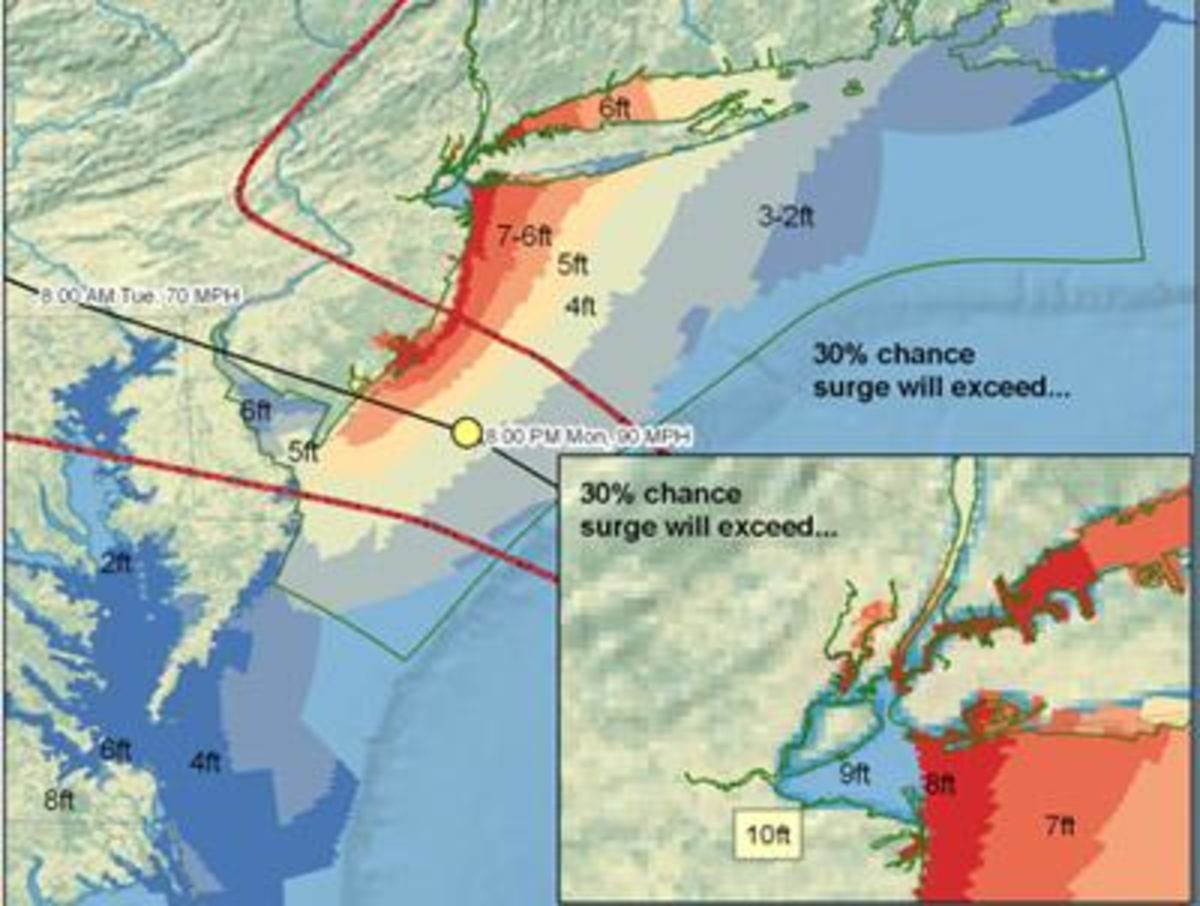 Credit: Davidson LaboratoryHurricane Sandy will forever be remembered as an extreme weather event that had devastating and cascading effects on the New York metropolitan region and throughout the east coast. From the initial destruction caused by the torrential rain, storm surge and furious winds to the massive flooding, loss of power and the impact on basic infrastructure and services upon which citizens depend each and every day, nowhere was this more apparent than Hoboken, N. J., hometown of Stevens Institute of Technology. The media, the public and policy makers turned to Stevens experts for advice on prediction and forecasting, real-time storm threat assessments, flood tracking and storm surge impacts, guidance on a smart and effective recovery, and innovative solutions to minimizing the impact of future natural disasters.

Stevens Institute of Technology’s campus in Hoboken, N.J. was directly in the path of the historic storm, and researchers and students at Stevens have contributed to the effort to mitigate Sandy’s impact in multiple ways—before, during and after the event.

The Stevens Center for Maritime Systems (CMS), a research center which focuses on assessing, predicting and mitigating the damage of natural and man-made disasters such as Hurricane Sandy, was in the spotlight in the initial stages of forecasting and continues to contribute to the ongoing national conversation about the serious global challenges presented by a changing climate, the impacts on coastline communities and citizens, and the broader implications for infrastructure resiliency.

Stevens researchers are informing policy discussions at the state and national level about solutions to mitigate the effects of the next “100-year” storm, to better protect lives and property and to ensure continuation of critical services during and after a natural disaster of this magnitude

When Hurricane Sandy was bearing down on the northeast, Stevens experts were playing a critical role in assessing and predicting potential damage from what promised to be unprecedented levels of coastal flooding and storm surge in the New York/New Jersey region. The Center for Maritime Systems’ storm surge modeling capability was a vital resource for New York and New Jersey government and emergency preparedness officials for up-to-the-minute flooding forecasts that informed their emergency response.

The Davidson Laboratory provided essential forecast models during Hurricane Sandy for flood levels and coastal conditions in and around the New Jersey, New York metro area.

The New York Harbor Observing and Prediction System (NYHOPS) was designed and installed by the Center for Maritime Systems to provide operations-critical information to the Port of New York and New Jersey. The system was developed with support from the Office of Naval Research and the State of New Jersey Department of Transportation, and through continuing partnerships with the National Oceanographic and Atmospheric Administration (NOAA), the US Coast Guard, the Port Authority of New York and New Jersey, the States of New York and New Jersey, and several maritime industry participants. These online, accessible visualization tools allowed responsible agencies and ordinary citizens to make more informed decisions based on the latest scientific information and technological tools available.

Dozens of national and regional media outlets, including “Good Morning America” and 20/20, reported data from the Stevens CMS storm surge model, along with perspective and expert predictions by Stevens faculty and researchers who were often braving the elements to appear on live news broadcasts or participating remotely using Internet videoconferencing, despite widespread power outages.

In the aftermath of Sandy, the Center for Maritime Systems is providing expert technical assistance to state and national organizations, with funding from and partnerships with agencies such as the Federal Emergency Management Agency (FEMA), the National Science Foundation (NSF), NOAA, the National Aeronautics and Space Administration (NASA), the New York City Office of Emergency Management (NYCOEM), the New Jersey Sea Grant Consortium (NJSGC), the New Jersey Department of Environmental Protection (NJDEP) and the University Transportation Research Center (UTRC). Research focuses on wide ranging and innovative products such as vulnerability maps to better anticipate coastal flooding and storm surges in low-lying areas in New York City and Boston, innovative technologies to mitigate flooding in urban areas, and systems-level approaches to improve infrastructure resilience and continuity of critical services. 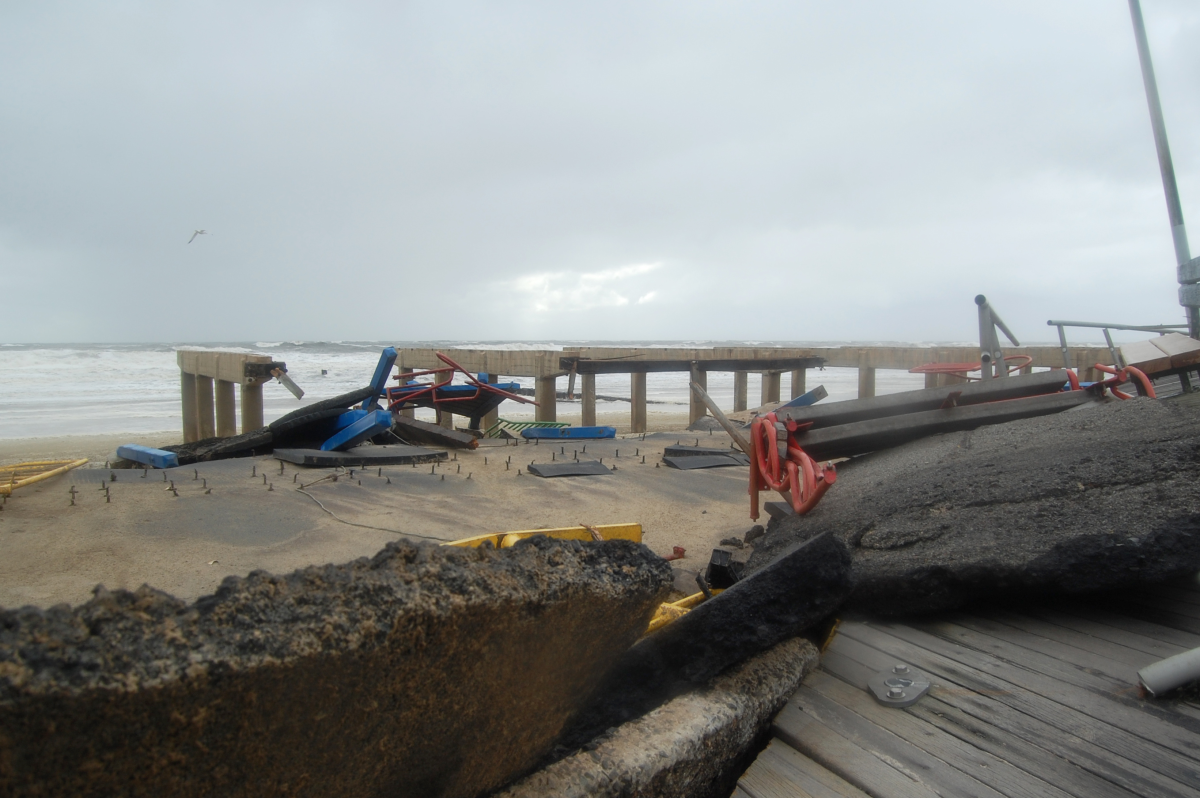 Hurricane Sandy made parts of the Jersey Shore region – the lifeblood of the state’s tourism economy – unrecognizable.

Immediately after the storm, Stevens coastal monitoring researchers carefully surveyed town-by-town damage to provide essential understanding of the storm’s impact to the New Jersey coast, delivered through media interviews with the New York Times, National Geographic, the Associated Press and many other national media outlets. Today, Stevens is leading the efforts of many shore communities to rebuild and recover, answering questions about where development should or shouldn’t happen and how to implement safety measures to limit vulnerability before the next hurricane season.

Through workshops and conferences in coordination with the New Jersey Sea Grant Consortium, Stevens experts are advising elected officials and local residents on best practices related to hurricane hazards, beach erosion, sustainability, climate change and the environmental consequences of redevelopment. The Coastal Protection Technical Assistance Service (CPTAS) informs and counsels New Jersey citizens and government officials regarding advances in coastal protection technology. By facilitating the free exchange of data and information among the various levels of government responsible for the coastal environment, CPTAS accelerates the implementation of advanced engineering technology in coastal protection projects.

Stevens is also providing its expertise on coastal patterns, beach erosion and zoning codes to the FEMA to inform the assessment of structural damage from future natural disasters.

Other Stevens-led research is focused on port protection and recovery, including methods to ensure that damaged deep-water ports can be safely, smartly and efficiently repaired and rebuilt.

The increased frequency and intensity of major hurricanes and other extreme weather events have made the call for innovation to mitigate their effects more urgent than ever.

Stevens is pioneering research activities designed to increase the world’s natural disaster preparedness and protection through novel science, technology and engineering advancements – research that has been covered in-depth by the New York Times, “PBS NewsHour,” and many other national media outlets. 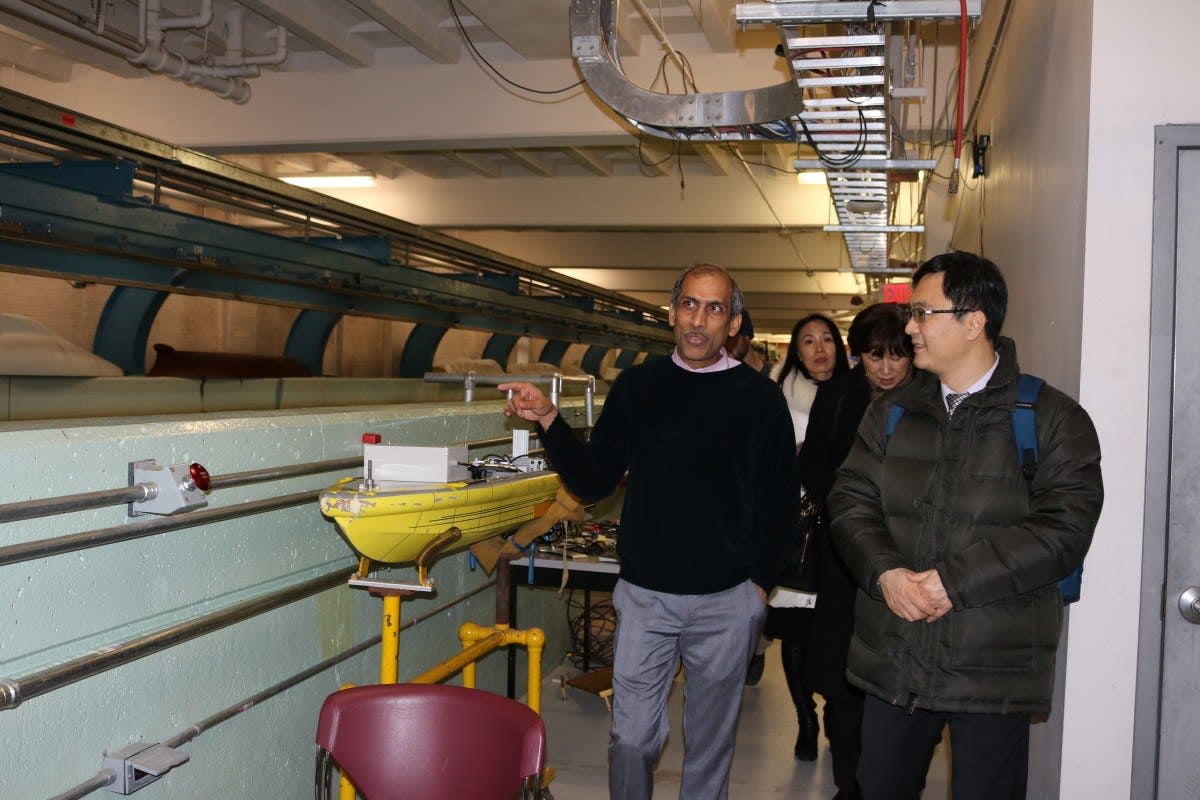 In the Center for Maritime Systems’ Davidson Laboratory wave tank, Stevens researchers are evaluating a unique method to lessen a storm’s strength by pumping cold water from the ocean’s bottom to its surface.

The Davidson Laboratory is also the testing site for the impact and effectiveness of removable flood walls, which are designed to protect coastal cities from major flooding caused by storm surges.

Stevens researchers are also investigating the potential of small-scale infrastructure adaptations, as well as building up coastal wetlands to better protect urban areas along the shoreline.

Stevens also hosted a field hearing organized by the U.S. Federal Communications Commission (FCC) designed to examine challenges to the nation’s communications networks during natural disasters and in other times of crisis.

In a Reuters.com op-ed co-authored by Stevens Professor of Systems Engineering, Dr. Ali Mostashari, the interdependency of complex systems—energy, transportation, and communications systems—was underscored with the recommendation to policymakers and citizens to take a systems-level approach when formulating solutions for the prevention or mitigation of future wide scale disasters.