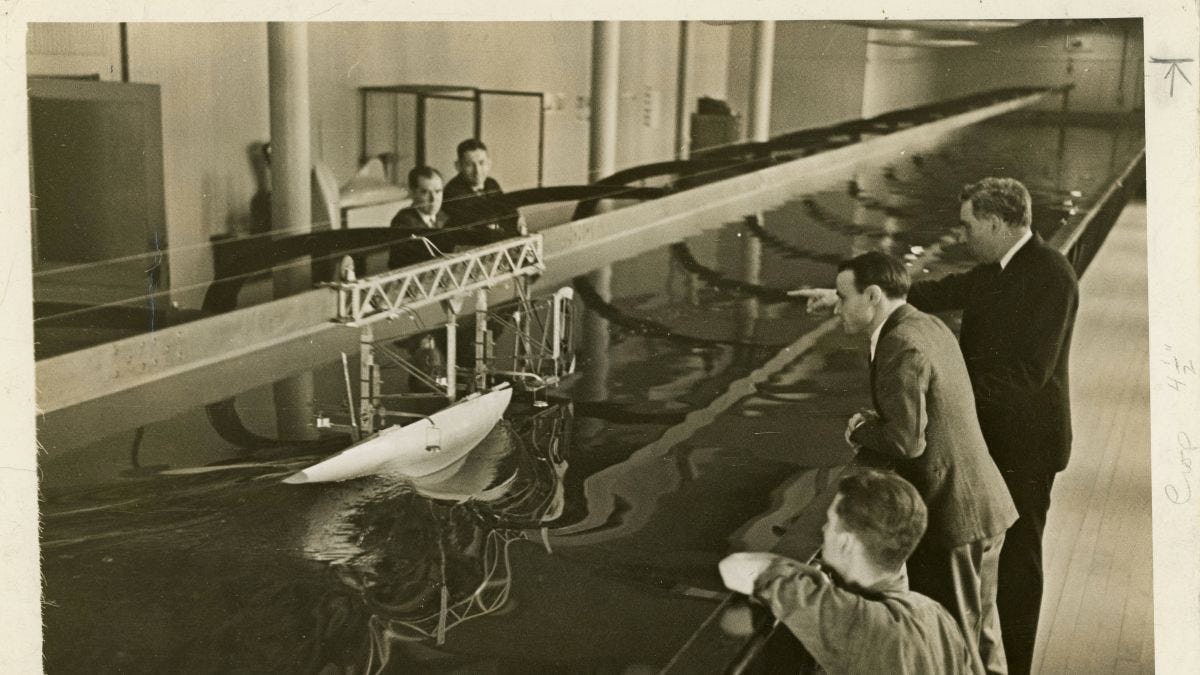 It was early 1942, in the dark days of World War II, and the U.S. Navy, under threat of submarine attack, needed a research facility that could test the maneuvering moves of a wide range of vessels. The only place in the world with this capability: an open-air pond in Germany.

Stevens’ own Experimental Towing Tank, known as Tank 1, was already devoted to the war effort, focusing largely on seaplane research. But professor Kenneth S.M. Davidson and his team answered the call from the Navy when the lab was selected to construct Tank 2, the world’s first indoor maneuvering basin, on Hudson Street. They built it in just four months.

Stevens would later build a third new tank — a high-speed towing tank — with two shifts of researchers and staff working day and night to help support the Allies.

This fascinating chapter of Stevens history — recalled in Davidson Laboratory and the Experimental Towing Tank: The History of Towing Tank Research at Stevens (1993) by former Schaefer School of Engineering and Science Dean and Davidson Lab director Michael Bruno — is just one of many in the renowned lab’s 84-year run.

The laboratory’s longtime testing of small ship models actually began in the Stevens swimming pool in 1931, led by Davidson, a former pilot in the Army Air Service.

Stevens’ original Tank 1 was housed in the old Navy Building, built by the U.S. government as a dormitory for the U.S. Navy Steam Engineering School during World War I. By 1936, the tank had become involved with the testing of racing yachts — the start of a long relationship with yachts competing in the America’s Cup that continues to the present day.

As war brewed in Europe, seaplane model testing began in 1938. Davidson and his colleagues had already been evaluating the “turning behavior” of ship destroyer models. But the Navy needed accelerated testing of seaplane hulls and looked to Stevens once again. The result was the construction of the 313-foot long High-Speed Towing Tank, or Tank 3, opening in November 1944, right next to Tank 2; it took nine months to construct. With young male test engineers and staff away in the service, women made up about one third of the laboratory staff during the war, many working in the key functions of model fabrication and testing.

In the post-war years and throughout the Cold War, the lab, renamed Davidson Laboratory in 1959 after Davidson’s death, expanded into testing of model torpedoes and submarines. Stevens researchers’ expertise led to their work in helping to design the Albacore, a forebearer of the modern submarine.

Another pivotal moment in the post-war research era was the hiring of Dan Savitsky M.S. ’52 in 1947. Joining as a researcher focused on seaplanes and crafts for the Office of Naval Research, he would serve, incredibly, nearly 70 years with the Lab — as a professor, researcher, lab director and consultant, well into his 90s. In 1964, Savitsky published a seminal technical paper that developed the “Savitsky Method” for predicting the horsepower requirements for high-speed planing boats; it remains a key breakthrough today for craft design. He and his team also produced important designs for landing craft for the U.S. Marine Corps, advanced planing craft for the Navy and floats for converting a Lockheed C-130 aircraft to a water-based aircraft.

The Davidson Lab even had a role in the nation’s space program, as researchers in the 1960s evaluated the behavior of the proposed Apollo Command Module in regular and irregular seas and the lab’s transportation group conducted a later analysis of the lunar rover. Indeed, an entire research group was created to work with the Army on the testing of road vehicles, amphibious vehicles and landing craft — research that continues today. That group actually helped in the development of the famed Bradley Fighting Vehicle tank, still in global use today.

Today, the Davidson Lab still works with military contractors and the Navy. But the lab’s work has diversified. Researchers work with New Jersey and federal agencies and industry partners on other marine systems including underwater autonomous vehicles and wave energy conversion, and on resilient/sustainable shorelines through studying long-term coastal evolution including the impact of climate change. The modeling and forecasting of wind, tide, current and wave conditions, to reduce loss of life and property, is also a focus area.