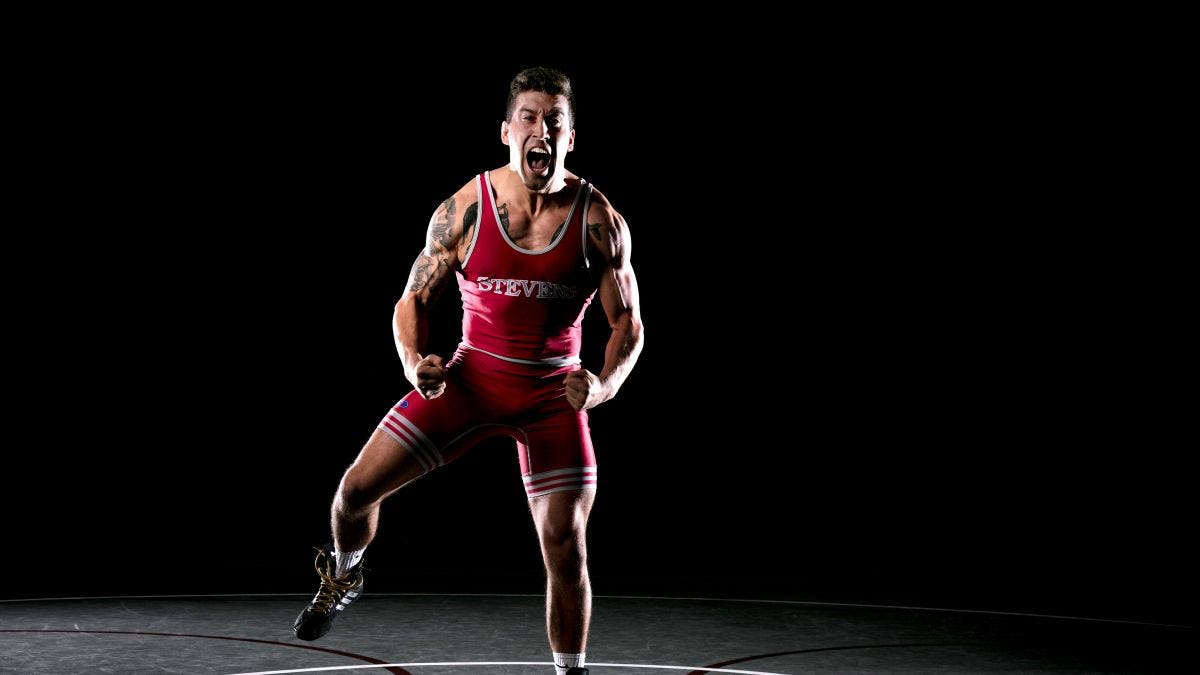 Despite the cancellation of the Division III National Wrestling Championships due to COVID-19, Dylan Van Sickell was named a Second Team All-American in recognition of his exceptional performance throughout the 2019-2020 season. Photo: Mike McLaughlin

Dylan Van Sickell ’20 comes across like so many other 22-year-olds — independent and ready for the challenges of post-graduation adulthood.

Unlike most of his peers, however, Van Sickell has spent his college career not only taking on rigorous academics, but also competing as a nationally ranked wrestler and preparing to serve his country in the United States Army.

Hailing from Little Silver, New Jersey, Van Sickell had an impressive career on the mats in high school and sought an opportunity to continue wrestling at the collegiate level. Stevens was the right fit. In order to help fund his education, he applied for an Army ROTC National Merit Scholarship. He was awarded a three-year merit scholarship which supplemented the support offered to him by Stevens.

Though he hadn’t considered military service before, Van Sickell saw the parallels between the training and mental toughness he developed throughout his life as a wrestler and the discipline needed to become a soldier. After careful thought and consideration, he accepted the scholarship and the serious commitment that came with it. 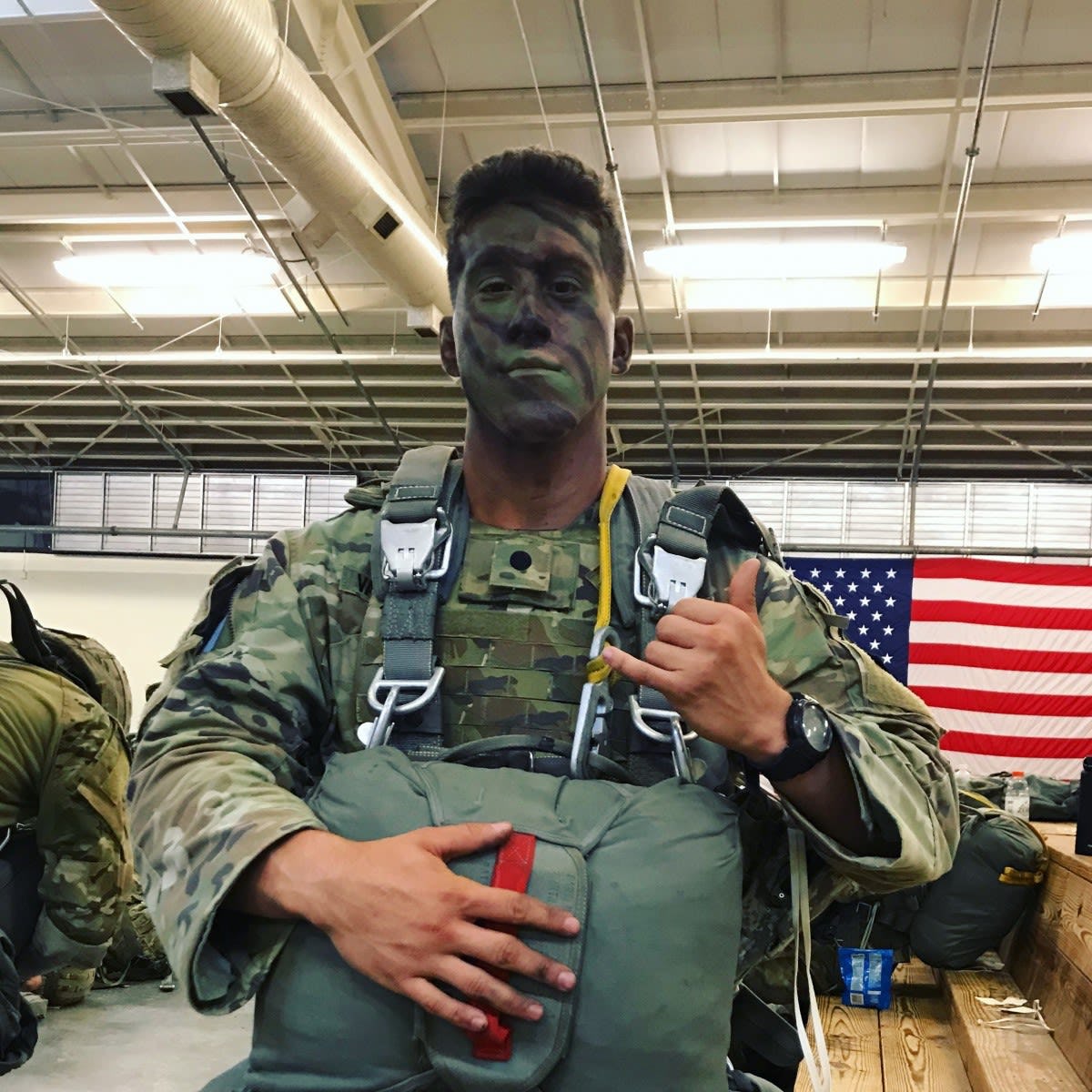 “It was a scary thing to decide [I wanted] to pursue the military at a young age, but people have made greater sacrifices and you have to keep that in perspective”  Van Sickell says. “Courageous people are courageous because they do things when they are afraid.”

“I told myself, ‘I’ll quit tomorrow,’” Van Sickell joked. “If you end up saying that every single day, you’ll never quite quit.” During that first year, Van Sickell felt pulled between his wrestling teammates and his fellow ROTC cadets, while recognizing the need to perform academically. Physical and mental exhaustion challenged his time management skills, resulting in “a lot of very early mornings and a lot of late nights.”

When he arrived on campus as a freshman, Van Sickell had to find balance as a student-athlete while commuting back and forth to Seton Hall University in South Orange, New Jersey, for cadet training. (Stevens has a joint agreement with Seton Hall to train its Army ROTC students.)

Despite his grueling schedule, Van Sickell posted an impressive 38 victories in his first season as a Duck. Throughout his college career, he would go on to amass 126 victories against just 44 losses during his four seasons, capturing three conference championships and earning three trips to the NCAA Tournament. He concluded his career ranked ninth at 157 pounds for all Division III schools by the National Wrestling Coaches Association (NWCA).

I am not the wrestler I am without ROTC, and I am not the cadet I am in ROTC without wrestling. I wouldn’t be the student [I am] without both of those.
Dylan Van Sickell '20

Van Sickell’s academic record stayed just as strong throughout his four years at Stevens; he maintained a GPA that earned him three NWCA Scholar All-America honors. He attributes his academic success in part to Stevens professors Lindsey Cormack and Ashley Lytle, along with dean Rosemary Dice — faculty members who played significant roles in his ability to balance multiple priorities throughout his college career. Van Sickell’s degree in social sciences blended psychology, public policy and governmental science — all lessons he’ll carry with him as he takes on leadership roles in the military.

“I am not the wrestler I am without ROTC, and I am not the cadet I am in ROTC without wrestling,” Van Sickell said. “I wouldn’t be the student [I am] without both of those.”

Unfortunately, Van Sickell’s senior year and final wrestling season didn’t play out as planned. The 2020 Division III National Wrestling Championships — where he was to be among seven wrestlers representing Stevens — was canceled because of the COVID-19 pandemic. Due to the unprecedented circumstances, the NWCA decided to announce its All-American honors based on performance through regional tournaments and up to the national championships. Van Sickell was named a Second Team All-American and is one of only 14 All-Americans in the history of Stevens’ wrestling program.

Another small bright spot was acknowledgment on ESPN’s SportsCenter, during which anchor Scott Van Pelt included Van Sickell and fellow wrestlers Troy Stanich ’20 (who was named the NCAA Division III Wrestler of the Year) and Thomas Poklikuha ’20 as part of a #SeniorNight segment, recognizing senior student-athletes who had their seasons cut short this year.

As his time at Stevens comes to an end, Van Sickell hopes that he was able to have a positive impact on other people’s lives and that his ability to manage three very different facets of collegiate life — academics, athletics and military service — paves the way for others to face similar challenges and find similar success. “I hope that I’ve been a good son, a good friend, a good brother, a good mentor,” he reflects. “I hope that people will look back on their time with me and think of it fondly. I just want people to know that I cared for them.”

The soldier-athlete now looks forward to a new beginning. With aspirations of becoming an Army Ranger, Van Sickell will commission as a second lieutenant this summer — the same rank as a graduate from West Point. As an infantry officer, he will attend Infantry BOLC (Basic Officer Leadership Course), along with ranger school.