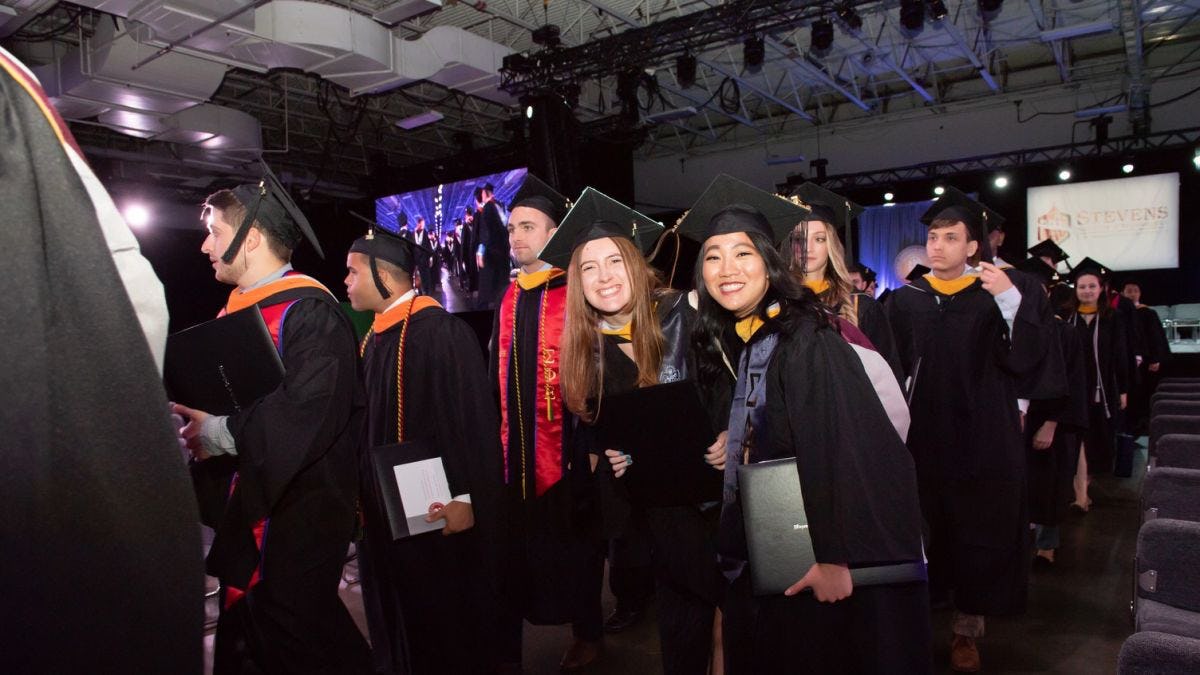 (Hoboken, NJ – Dec. 18, 2018) – In a powerful assessment of the value of a Stevens undergraduate education, 96 percent of the Class of 2018 has received employment, admission to graduate school or other first destination outcomes six months after graduation, with 79 percent of seniors finalizing their plans while still in school, according to 2018 Student Outcomes Report.

Global corporate giants such as EY, Google, Jet.com, Merck, NBCUniversal, Prudential, PwC and UBS each hired multiple members of this year’s graduating class, contributing to an average starting salary of $71,400, the highest in the university’s history and a 5 percent increase from the previous year.

“In a labor market driven by technology, it’s no wonder that Stevens students are recruited by some of the most influential and sought-after companies in the world,” said Lynn Insley, executive director of the Stevens Career Center, citing the most lucrative fields for Class of 2018 graduates as cybersecurity, computer science, quantitative finance, chemical engineering and computer engineering.

The report further revealed that while 78 percent of graduates entered the workforce, the military or returned to their home countries, 18 percent continued their education and pursued advanced degrees. Of the students pursuing advanced degrees, 85 percent are seeking a master’s or doctorate, with the balance pursuing medicine or law. Overall, 87 percent of the class reported first destination plans.

At 97 percent, women in the Class of 2018 also reported higher first destination outcomes than the overall class within six months of graduation.

“The goal for any student at Stevens is not just to pass exams, but to be competent and critical lifelong problem solvers who can transfer their classroom knowledge to outside situations,” said Insley. “Year after year, that’s what we consistently hear from employers and graduate programs: Stevens students have a knack for transferring what they learn in the classroom to advancing their workplace, their area of study and their field.”

The latest report comes less than two months after PayScale ranked Stevens No. 14 in the nation for graduates with the highest mid-career in its 2018-19 College Salary Report, placing it among institutions such as MIT, Stanford and Caltech.

Earlier this year, Stevens garnered an important distinction when it was ranked No. 2 in the nation for the smallest gender gap in earnings among its graduates, with women out-earning men by 1.6 percent, according to data reported by Forbes. That report highlighted Stevens as one of just three schools whose female graduates made more than their male counterparts.

To read the report and learn more about the success of Stevens graduates, visit stevens.edu/directory/stevens-career-center/career-outcomes.