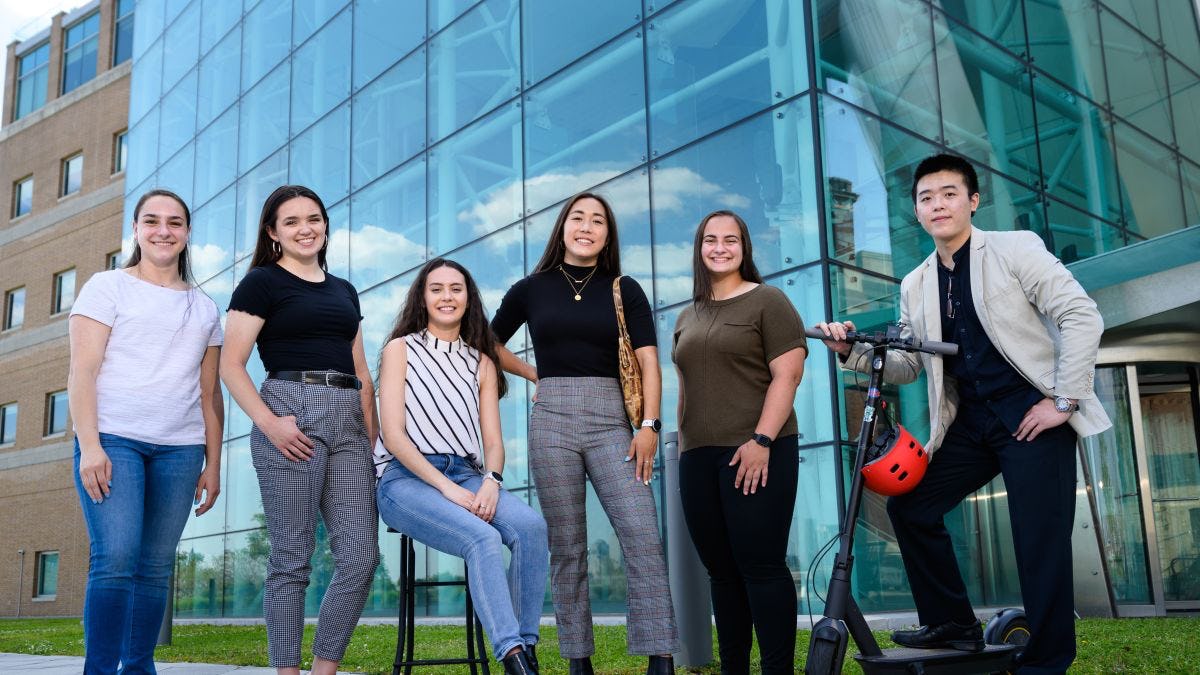 The women now leading Stevens’ Student Government Association (SGA) made history earlier this year without even knowing it. They were too busy doing their jobs.

This past spring semester, Stevens students elected five women to the top six leadership positions of the SGA Executive Committee, which oversees an approximately $850,000 student activities budget, works with more than 150 student clubs and organizations along with a student Senate, and serves as the student voice to the administration, faculty and staff. Only after they settled into their roles did they learn they are likely the largest group of women to hold these top student government spots over Stevens’ 150-year history.

“I don’t know if it’s something we think about,” says Victoria Agaliotis ’22. “I think that people thought we were really the best people for the job.”

But once they realized that bit of trivia — and taking into account that Stevens’ student body is about 70 percent male and 30 percent female — these women knew this was a special moment, says SGA President Liana Meyer ’23.

“It’s so incredible to see women taking significant leadership roles on campus,” says Sara Klein, assistant vice president for Student Affairs at Stevens. “For an institution that first welcomed women 50 years ago, no one could have imagined the powerful role women would have in our community. It is also notable that it did not even occur to the women of the SGA Executive Board that their taking office was a historical milestone for Stevens. The climate for women has improved so much in recent years that to our students, women in leadership roles within a STEM community is normalized.”

For their small population, women at Stevens have a high participation rate when it comes to student activities and clubs, with many involved as members and taking leadership roles. Athletics is an area where Stevens women shine in leadership, so it’s no surprise that all five of the female SGA executive women are also student-athletes.

“As an athlete, you have to be good at time management,” says Pinho, who runs both cross country and track. “There’s a general drive to get the job done.”

Getting the job done in student government this past spring was challenging, to say the least, with in-person club activities and events canceled due to the coronavirus pandemic. The club meetings that were held took place on Zoom, which “aren’t the most fun,” Murphy concedes.

With Stevens fully reopening for the fall semester, this SGA team is excited to sponsor in-person activities again and bring the campus back to life. They look forward with optimism.

“The (Spring 2021) semester was pretty rough on a lot of people, and they were disengaged. I think (this fall) people will get involved as much as possible and do it all,” Meyer says, adding that she and her team predict a surge in student involvement.

The SGA Executive Committee asked the student body to help identify its top priorities for the coming academic year and they include: improving faculty adviser relationships with students; providing more transparency on how certain scholar programs are operated; and increasing student participation with the SGA and Stevens clubs and organizations.

They hope their constituents got the message: We want to hear your ideas.

“We’re all open-minded people. We tell people — tell us what you want to see. We’ll make it happen,” says Agaliotis.

“I’m really big on making the change that you want to see,” Poska says.