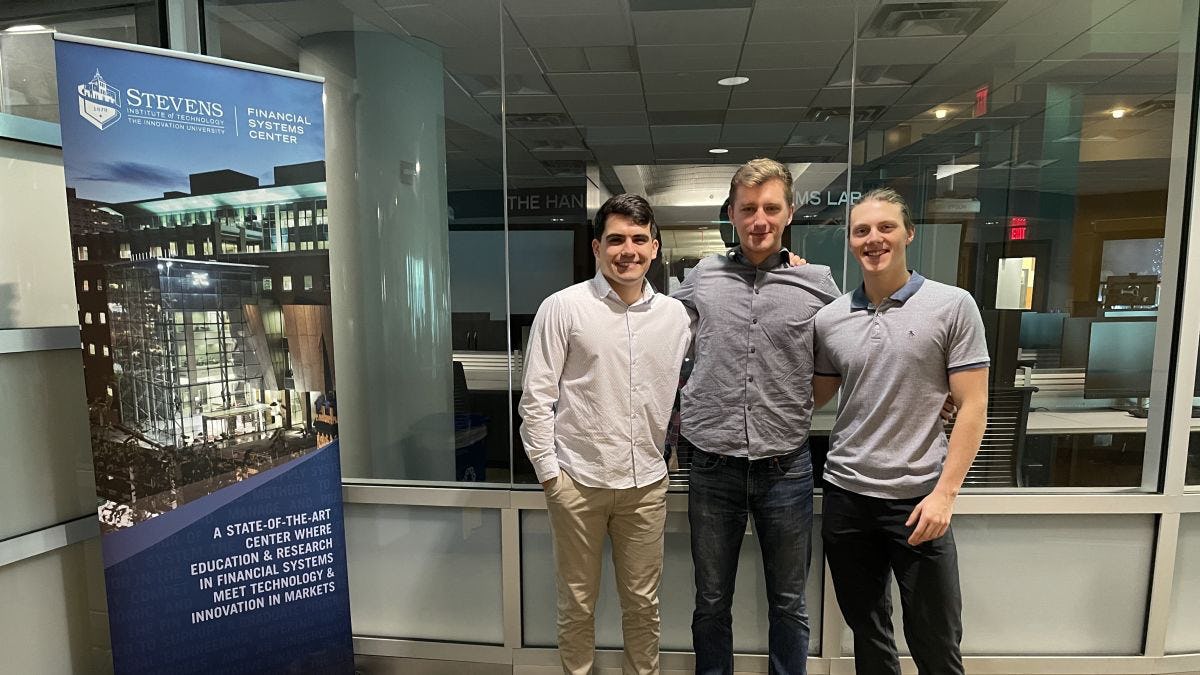 From left: Lech, Stepanyan, and Moszczynski outside the Hanlon Financial Systems Center

A team of finance students placed 50th in the world, beating the market with strategies they learned in the classroom.

How do you assemble a world-class team of stock traders? At Stevens, it’s as easy as knocking on your dormmate's door and calling up a long-time friend. Dmitiry Stepanyan ’24 recruited Damian Lech ’24, his friend from high school and a fellow finance student, and Adam Moszczynski ’25, his neighbor and fellow member of the Student Managed Investment Fund (SMIF) to compete in the 2022 Bloomberg Trading Challenge. They finished 20th in North America and 50th in the world, out of 1000 total teams.

Moszczynski and Stepanyan are quantitative finance majors and Lech a finance major. The trio competed under the moniker “Slavic Inc.” as an homage to their shared ethnic backgrounds. Moszczynski and Lech are Polish and speak the language. Stepanyan is Russian, yet he’s also fluent in Polish. If the Hanlon Financial Systems Center was crowded with their competitors, the team could conceal their strategy by swapping languages.

Bloomberg’s challenge simulates live trading in the market, giving these students a chance to apply their classroom knowledge. “We had four weeks to invest our one million dollars, and the purpose was to beat the benchmark,” said Stepanyan, the team’s captain. Dr. Donald Lombardi served as a faculty advisor to Slavic Inc., offering encouragement and support throughout the challenge.

"Whether it is in classroom discourse or while changing trains through Secaucus Junction, these three gentlemen have an unrelenting thirst for knowledge and an integrity that serves them well in all they do at Castle Point, including this competition,” said Lombardi. “Those qualities, along with their financial acumen, will be unquestionable assets in their careers.”

Over the four-week run of the trading challenge, Slavic Inc. used the Bloomberg terminals in the Hanlon labs to execute trades. Each week, Bloomberg distributed a report of the world rankings, and like any good stock pick, Slavic Inc.’s ranking trended upward.

Teams were scored based on their relative performance to the benchmark index. By the end of the month, Slavic Inc. had beaten the index by 5%, earning them a top-50 placement.

Not only did the team have time constraints but also limits on the types of trades they could make. Teams were only allowed to take long positions in stocks, meaning that they would only make money if the stock price increased. The challenge happened during a downturn in the market, which made it harder to make money. Slavic Inc. considered macroeconomic trends when deciding their approach, which helped them beat the market.

This team found stocks that were winners in the short term and sold before they became losers. “We chose short timeframes for our investments to capitalize on every upturn in the market,” said Moszczynski. “We had limited opportunities.”

The team knew that they would have to be quick and decisive to perform well in the challenge. It would have slowed them down to involve the whole team in every trade. Instead, they helped each other develop trading strategies, then executed them independently –– like three trading desks within a larger firm. "It's fast paced, so we had to give each other autonomy,” said Lech.

Stepanyan bought riskier stocks that he thought had been underperforming and would recover within the month. Lech traded on events, such as earnings reports. And Moszczynski, the team’s quant extraordinaire, built a mean-reversion model in Python, which identified stocks with momentum and indicated when to buy and sell. Moszczynski’s model required significant coding effort, but it paid off. “My strategy came from SMIF and from everything I learned in the last year,” said Moszczynski. “I just threw it all together.”

Despite these different strategies, the team collaborated throughout the month. Slavic Inc. regularly discussed how to allocate their funds, which “provided a good system of checks and balances that kept [the team] on course,” said Stepanyan.

This experience, which has made the members of Slavic Inc. closer friends, will also propel them towards successful futures in finance. This summer, Lech will work in wealth management as an intern at a family-trust firm; and Moszczynski has an internship at a commodities firm, trading derivatives. Stepanyan plans to pursue a master’s in financial engineering through the Accelerated Master’s Program.