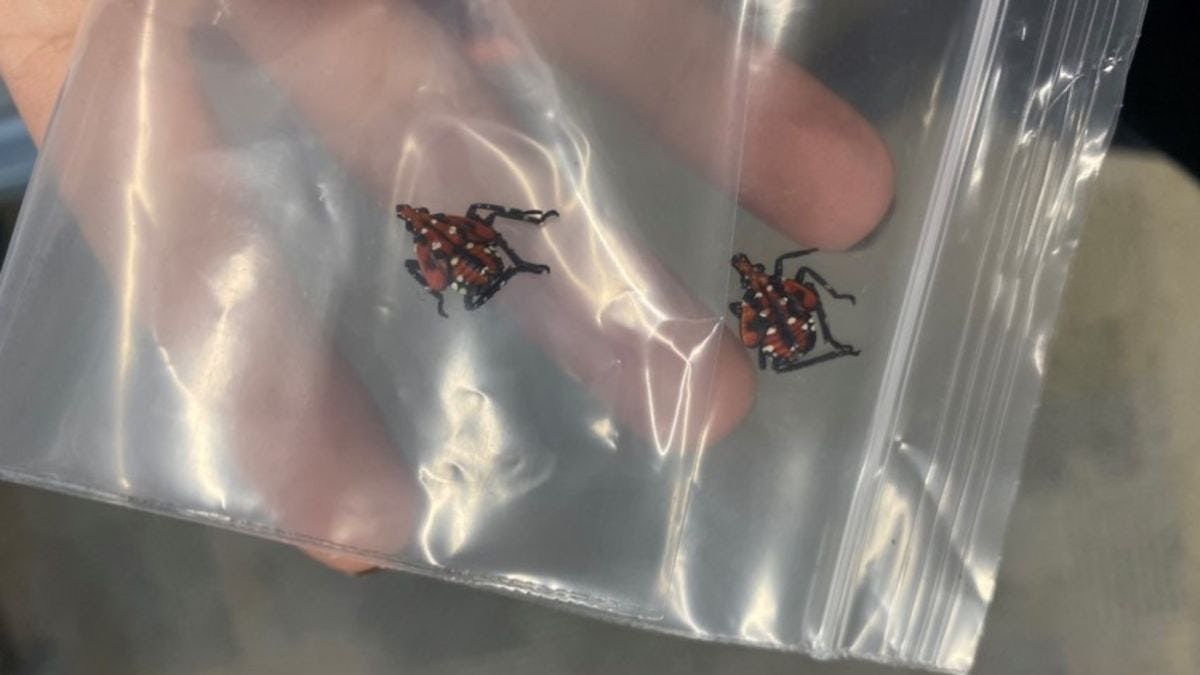 Ava Mroz ’22 recently received media attention for her efforts to combat the tree-infesting invasive pest as part of her role as environmental assistant for the town of Secaucus.

They may look beautiful with their delicate spots and sudden burst of crimson when they spread their hindwings, but spotted lanternflies (Lycorma delicatula) are invasive insect pests. And they’ve been wreaking havoc on native trees and valuable orchard crops since their first arrival in the United States in 2014. In her corner of New Jersey, Stevens Institute of Technology alumnus Ava Mroz ’22 is doing something about it.

What is the spotted lanternfly? 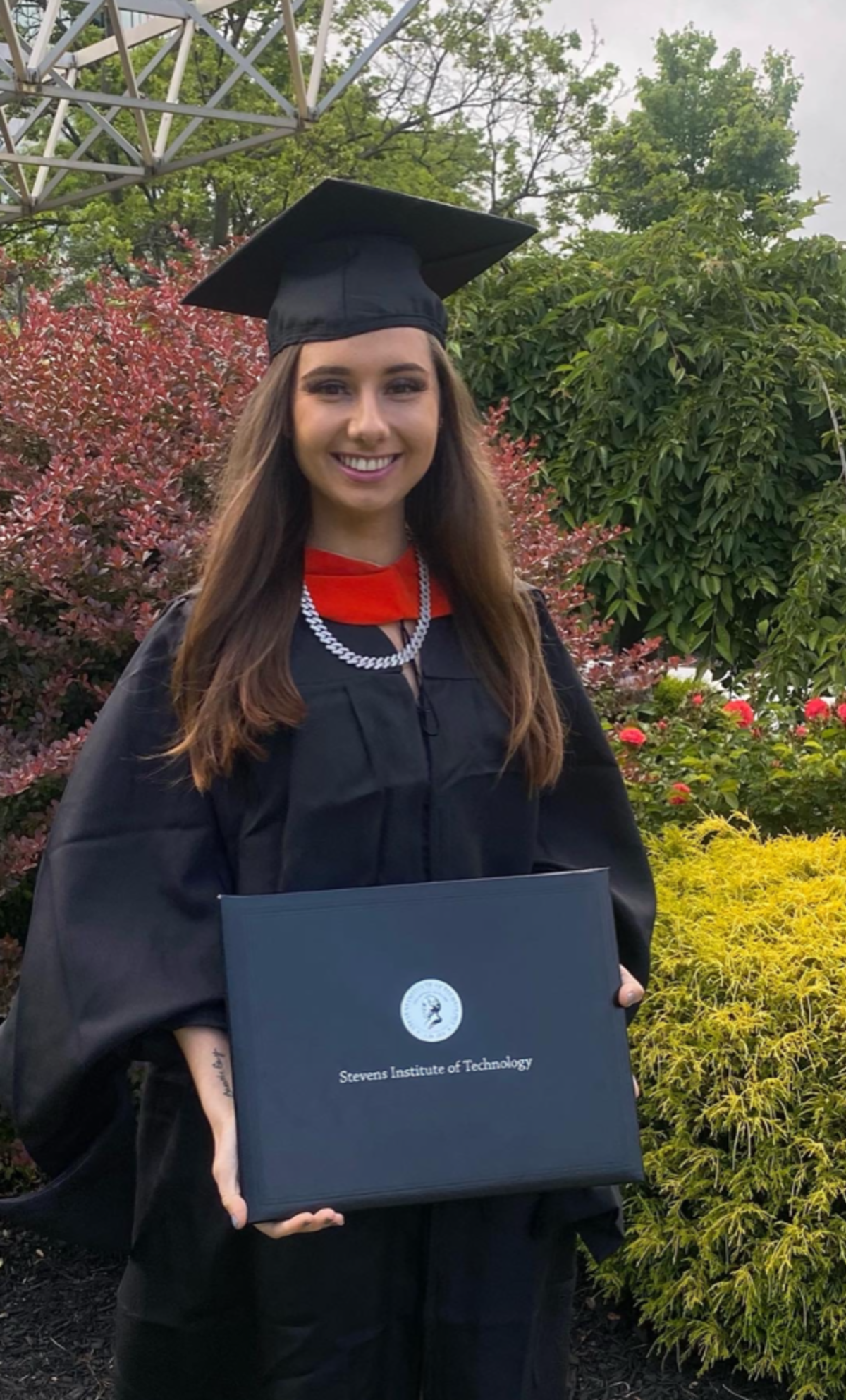 Ava Mroz ’22 serves as the environmental assistant for the town of Secaucus. She earned her M.S. in Sustainability Management at Stevens this spring

Each spotted lanternfly starts its life inside an egg mass that contains between 30 and 60 developing insects. In the spring, tiny juveniles—called nymphs—burst from those eggs. At just 1/4-inch long and boasting a stout, wingless black body with white spots, the nymphs look nothing like the adults they will become. And that’s a problem for identifying and removing the hungry juveniles.

“The issue is that there's not enough news coverage about what they look like in their nymph stages,” Mroz, who is the environmental assistant for the town of Secaucus, explained. “When they're nymphs, they look completely different, and a lot of people aren’t aware that that [nymph] is the spotted lanternfly—and that they're still killing the trees as babies.”

The nymphs will spend the whole summer feasting on trees, sinking their mouthparts into the tissue and sucking out the sweet sap. That weakens the tree and can even kill it over time. For young trees or those with massive infestations, the damage can accumulate faster. Plus, the nymphs excrete a sticky substance called honeydew while they eat, and that can encourage the growth of black mold.

Mroz says the native trees most affected in her area are maple, honey locust, black walnut, and sumac. And then there’s the ailanthus, or tree of heaven, which is native to the same part of Asia as the spotted lanternfly so serves as a primary host plant in the United States.

As the nymphs feed on those trees, they’ll pass through four substages (instars) until they’re about an inch long and bright red. After one final molt into adulthood, the spotted lanternfly will unfurl its characteristic speckled wings and take to the air to mate and lay a new generation of eggs. Each successful female will lay one to two egg masses on the hard, smooth surfaces of trees (and sometimes outdoor gear or vehicles). And the cycle starts over. 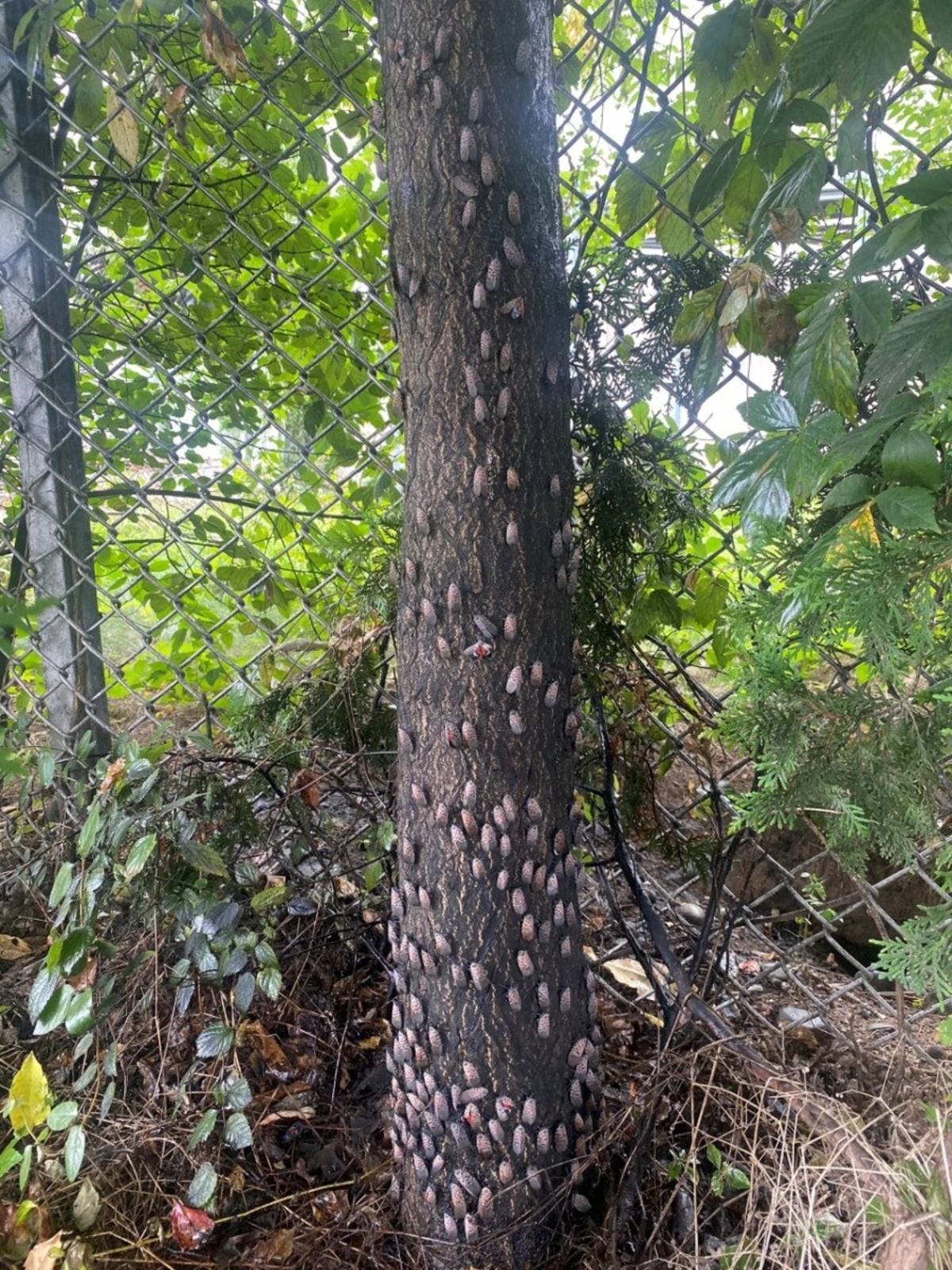 This year Mroz directed a powerful educational campaign to teach the public how to recognize and remove the egg masses. She visited all the local schools to recruit the youngest citizens and created a clever educational video to help “stomp out” the problem. Her work was recently featured on News 12 New Jersey and in the Hudson Reporter.

“We wanted to get rid of the issue before it started—with the eggs,” she said. “My colleague and I removed—I'm not even kidding—tens of thousands of eggs over this winter.”

Now, any undestroyed eggs have hatched, and nymphs are much harder to deal with. Even without wings, those juveniles pack a powerful jump, so they can travel a few miles to find the tastiest plants. Sometimes they hitch a ride on vehicles or recreational gear or even clothing.

Mroz says the most efficient methods for removing nymphs are a standard shop vac or circle traps. These traps were originally designed to capture pecan weevils as they scaled tree trunks looking for a meal, but they work just as well for immature spotted lanternflies, who are prone to falling from the tree’s canopy and then must climb back up—and hopefully into a trap.

“I'm scared for the spotted lanternfly season,” Mroz acknowledged. “I know it's going to be a lot worse now than we've ever seen, but hopefully with time, nature balances itself out. It's just going to take quite a few years, but I have faith that we’ll get there.”

Environmental and Social Governance in Secaucus

Dealing with spotted lanternflies is just one small part of Mroz’s job. She also manages the community garden program, which she’s seen triple over the past two years, and hosts the Secaucus Green Festival, which brings in three to four thousand people every year. She worked on the town’s Sustainable Jersey certification, directs environmental cleanups around town, and handles the Trex recycling program for flexible films—just to name a few of her responsibilities.

It was during a rain garden infrastructure project that Mroz first met Dibs Sarkar, professor of environmental engineering at Stevens and the founding director of the Sustainability Management graduate program.

Mroz, who began working in the Secaucus environmental department as an undergraduate, decided the program at Stevens was a solid fit for her passion for environmental and social governance. She says the field—which supports businesses aligning their corporate values with the United Nations’ sustainable development goals—is a booming one.

“The possibilities in the field are endless,” Mroz said. “Especially with a degree from Stevens. You can definitely do a lot with that.”

This summer in Secaucus, that means working for the environment one squished spotted lanternfly at a time. Tomorrow? Maybe the world.