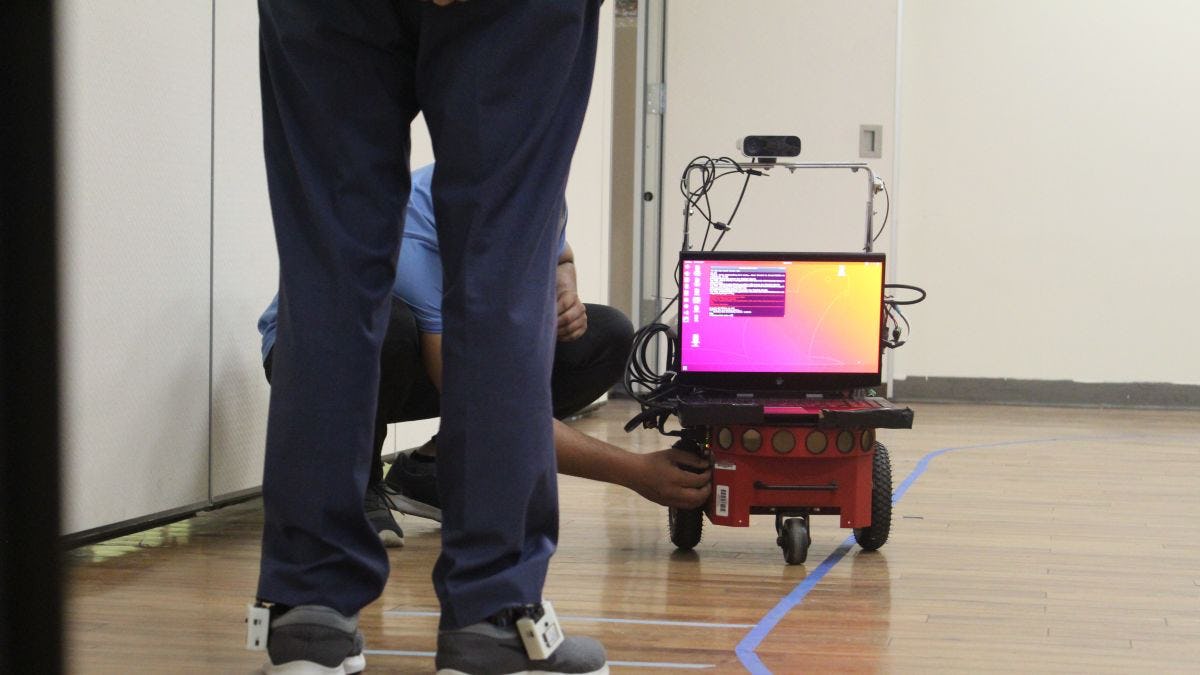 Ph.D. students at Stevens spent a summer fellowship getting hands-on experience at a New York community center testing their robotics technology that could improve how seniors exercise and communicate with each other

Falling is the leading cause of death to adults over the age of 65 and that rate is increasing, according to the Center for Disease Control. One-on-one physical therapy can help seniors to stay active, strengthen their muscles and improve aspects of gait such as balance, which can aid in prevention — but the key is that participants must practice in between appointments in order to build up a meaningful amount of strength and skill. How can a person stay on-task in-between meetings with their trainer?

Robot helpers, alongside humans, just may be an answer. 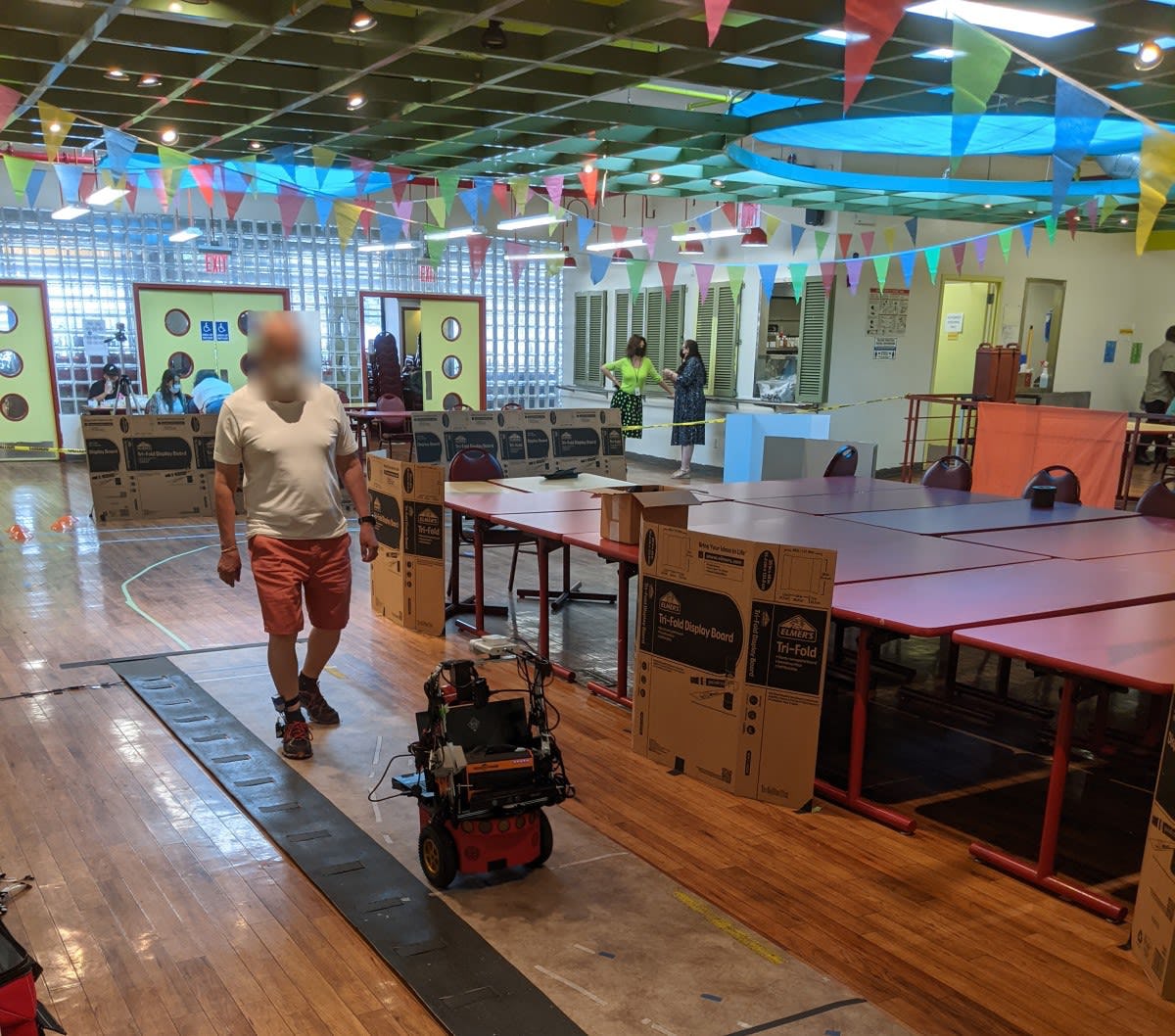 During the summer of 2021, two Ph.D. candidates at Stevens Institute of Technology traveled to the Sunnyside Community Center in Queens, New York, and used a mobile robot equipped with an RGB-D sensor that helped guide more than 30 senior citizens in walking exercises. Additionally, they collected biomechanical data that came from the sensors in the participants’ insoles as well as on the robot itself which were connected wirelessly. This is known as a robot-guided walking exercise.

The objectives of the project could potentially change how older adults thrive in their communities by supporting exercise and bolstering social connections. With elderly citizens, the fear of falling can be alarming, but regular exercises may increase muscle strength and improve balance.

Zhuo Chen, who received a Ph.D. in electrical engineering in the fall of 2021, and Qingya Zhao, who is pursuing a Ph.D. in mechanical engineering, participated in the Frank Fernandez Automation Summer Term Fellowship for Robotics Research.

“Aging is a big societal issue,” said Yi Guo, professor of electrical and computer engineering at Stevens and Chen’s faculty advisor. “We’re trying to develop the technology to help and robotics can’t replace workers but with some simple tasks it can help and have a positive effect.”

Guo emphasized how important it was to share this technology with the people who need it most.

“We worked in this direction for several years and this summer they (the students) brought the system to a new environment. I was impressed with the students, who brought it from a lab to the senior center.”

For Chen, who now works as a robotics engineer with Meteorolite Ltd. in Somerville, New Jersey, the fellowship award was life-sustaining by providing both educational and financial support. After being admitted into the Ph.D. program in 2015, Chen was given this assignment in 2018 as part of his thesis.

“I have been interested in computer programming and physics since a young age,” Chen said. “Robotics in my opinion is a perfect combination of the two subjects.”

Chen spent considerable time at Stevens writing code and working with sensors and actuators. He remembered how he first got involved with robotics and how that passion grew over time.

“The first robot I built in college was a two-wheeled self-balancing robot for a robot competition for college students,” Chen said. “I was fascinated by the state estimation and control problems involved in programming the robot and hence decided to pursue further academic study.”

Zhao was admitted to the Ph.D. program at Stevens in January 2021 after receiving her master’s degree in mechanical engineering from Columbia University the previous year. She started working on this project’s objectives on her first day at Stevens.

While Zhao had worked on similar projects in the past, getting hands-on experience outside the lab at the community center was valuable for her.

Both students recalled how they had to persevere through technical difficulties and how fixing unforeseen problems can often be the most important task. Chen reflected on a moment where a robot was struggling to localize itself in the dining area of the community center because of the restricted range of an RGB-D sensor.

“I value the troubleshooting experience,” Chen said. “Building robots that interact with humans can be a challenging task.”

Zhao had a similar takeaway from dealing with complications during the project.

“We had some problems and I got some experience with how to solve them when they happen. It’s challenging and the process is interesting.”

Damiano Zanotto, assistant professor and faculty advisor for Zhao, was impressed with her ability to not only resolve technical issues as they came up, but also connect with the members of the community center.

“Once the project moves from a lab to a real-world application, everything has to proceed smoothly in order to not discourage the study participants, and Qingya has been so successful at identifying and quickly fixing technical problems as they happened, while also cheering up our study volunteers.” Zanotto recalled.

The summer fellowship allowed the students to test the technology in a real-life setting and make a meaningful difference for senior citizens. The students received encouraging results from the study, and the hope is that more research will continue to provide even more information.