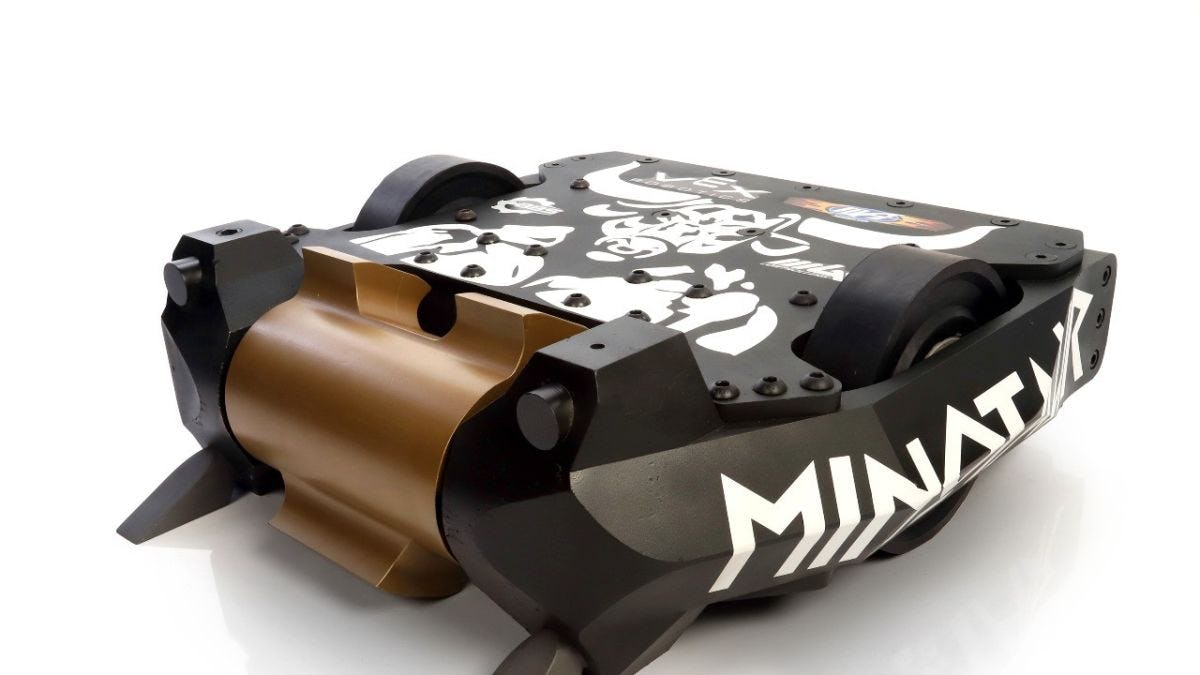 The Minotaur is available as a remote-controlled action figure as part of Hexbug's Battlebots toy line. Photo Credit: Hexbug

As BattleBots makes its return to television on June 7, so does Rodrigo Nogueira, a Stevens’ graduate student studying mechanical engineering. Serving as lead designer and fabricator of the robot Minotaur, Nogueira and his team RioBotz are hoping to beat last year’s second-place finish.

“Our robot is taller this year, from 188 mm to 220 mm, so that the wheels and drum became larger and chassis is much stronger,” he says. “We’re using 2-inch maraging steel 18Ni alloy for the weapon shaft, a material widely used in the aerospace industry for achieving very high strength, impact toughness and hardness.”

In BattleBots, two robots square off against each other in a 48-foot by 48-foot arena, on a mission to destroy one another for three minutes. The robots, which come from across the globe, are ranked on their win/loss record each week, eventually leading to the championship rounds. It’s a showcase of engineering, but it’s also good TV and gets kids interested about STEM fields.

“In addition to the robot needing to be reliable in extreme conditions, from an engineering standpoint, it also has to put on a good show. Parts breaking, titanium sparks flying and lithium batteries catching fire are common. It’s fun,” Nogueira says.

Through it, I made good friends and got to meet engineers from across the world doing something similar to me, but with a totally different background. There are plumbers and MIT grads, families with kids and aerospace industry people. It really is an amazing experience in every way.
Rodrigo Nogueira

Minotaur’s weapon, a 50-pound hardened steel drum spinning at 8000 rpm, is known to flip opponent robots and send their pieces flying through the air.

“You can’t see the drum, which spins from the floor upward. The ‘tooth’ of the drum comes from the bottom and hits the opponent head on, which throws the other robot in the air. The drum’s gyroscopic effect is so strong that we can unflip ourselves mid-battle, if needed,” Nogueira says. “As with any sport, you don’t know what’s going to happen and so much depends on luck and driver skills.”

And, of course, a strong and powerful robot. Minotaur boasts a 9-horsepower drivetrain (roughly the power of a go-cart, Nogueira says), 26 horsepower for its weapon (two 13-horsepower motors, one on each side) and its batteries can sustain a peak current of 1600 amps to speed up the drum. In this world, Minotaur is considered a “mean robot.”

Discovering and joining RioBotz early in his freshman year at Pontifical Catholic University of Rio De Janeiro, Nogueira says it helped foster his interest in electric vehicles. But the research and availability of electric vehicles is slow to happen in Brazil, he says, which is why he came to Stevens.

The world of combat robots has also given him a minor taste of fame.

“The arena is surrounded with fans and there are a lot of people, especially kids who come up to you in between battles, wanting to take pictures. During the events, we’re like celebrities,” he laughs. “There’s even a Minotaur remote-controlled action figure.”

The real appeal, though, is showing the fun side of engineering and the camaraderie, even among opposing teams.

“It’s a very nice competition and [all the competitors] help each other out in between battles, welding or lending parts. Through it, I made good friends and got to meet engineers from across the world doing something similar to me, but with a totally different background. There are plumbers and MIT grads, families with kids and aerospace industry people. It really is an amazing experience in every way.”

BattleBots kicks off its 2019 competition on Friday, June 7, on Discovery, with another airing on June 12 on Science Channel.