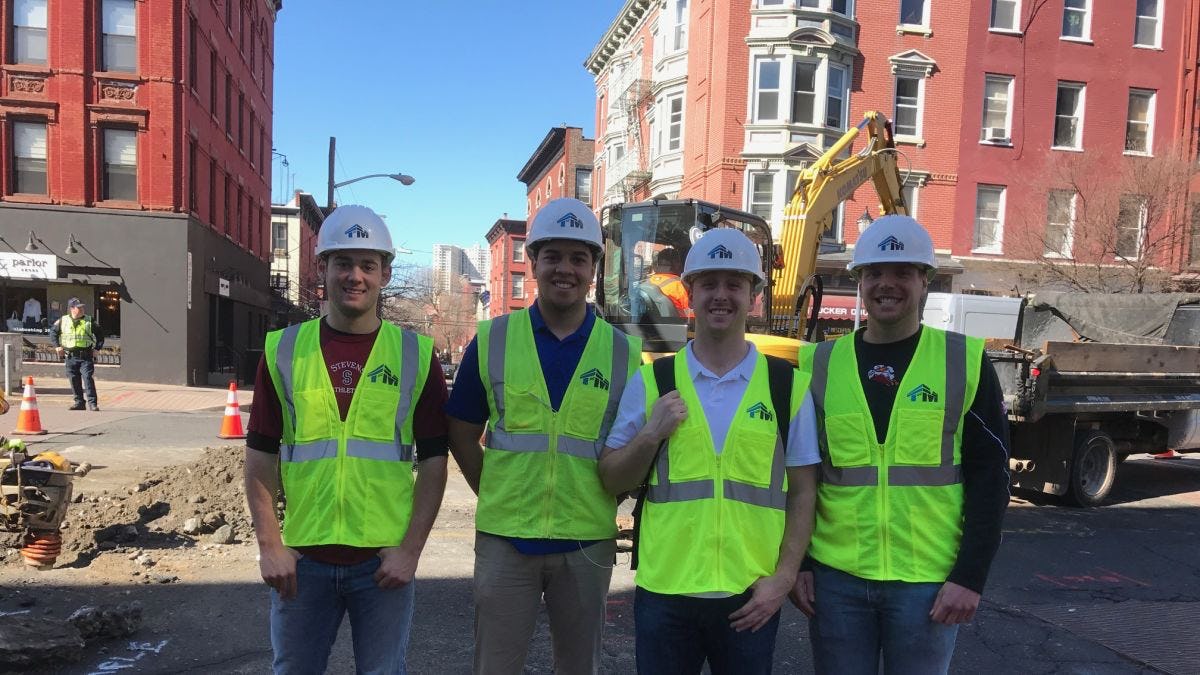 Water is a never-ending subject in Hoboken. The mile-square city along the Hudson River regularly floods during rainstorms. But the city suffers from another recurring water problem– aged water mains that are breaking at a higher rate than before.

For residents, as well as students from Stevens Institute of Technology, the impact of such disruptions on daily life can be severe.

“Thanksgiving of 2015 there was a huge water main break where we were out for a few days and classes were canceled. That was when we started to realize that this was a problem,” recalled Stevens senior Dennis Caramante.

Upgrading the city’s water mains will not happen overnight. With roughly 1,800 pipes in place throughout the city, any replacement would have to take place street by street.  In her annual state of the city address earlier this year at Stevens’ DeBaun Auditorium, Hoboken Mayor Dawn Zimmer announced that the city was investing a record $12 million this year to upgrade the water distribution system, beginning with water mains along Washington Street, the city’s iconic thoroughfare.

But Hoboken officials are not the only ones taking a closer look at the aging water main system.  A seven-member senior design team from Stevens – comprising of mechanical engineering majors Dennis Caramante, Brooks Lehle, Dan Nizolak and Brian Fratto, civil engineering majors Patric Wiegartner and William Korosec, and engineering management major James Park – will display their plans for replacing the water main along 9th Street, an area identified as one of critical concern, at the annual Stevens Innovation Expo on May 3.

With a project so broad in scope and complexity, the team worked under the close supervision of Stevens civil engineering professor Leslie Brunell, P.E., who helped connect the team to a design sponsor: SUEZ, the company that operates the water system for Hoboken.

“Without all the data and industry support, it would have been nearly impossible for the project to get off the ground. So I reached out to a couple of contacts at SUEZ, including a former Stevens student, who then connected the team to a group that mentored them throughout the project” explained Brunell.

“SUEZ helped us formulate how we were going to tackle this project, and gave us advice, as well as every tool we needed to be successful with the project,” said Caramante.

The multi-layered project, which spanned two semesters, split the design into smaller tasks. The first phase of the project led some of the team members into an exhaustive search into the city’s tax records so that they could determine the exact age of existing pipes, some of which were over 100 years old.  Using a geographic information system software, the team created a prioritization matrix to identify which streets were critical to address.

“We evaluated the priority of every single pipe based on factors such as age, demand and proximity to critical facilities such as a hospital, an electrical substation and schools. Stevens falls under that category. Then we rated every single pipe on a scale from 0 to 100 in terms of priority,” explained Lehle.

Something else the team factored into their prioritization matrix was the cost to local businesses during breaks and the impact of future construction.

“We went out and surveyed businesses to determine how much money they would lose per day without water, or if they had to shut down completely. That was something we added into the process that was different from standard procedure,” noted Caramante.

With the help of advisors Hetal Mistry, P.E. and Alberto Quiroz, P.E. of SUEZ, the team targeted 9th Street from Hudson Street to Grand Street, for their redesign.

“That street encompasses a couple of high priority pipes that we identified using our priority matrix,” said Lehle.

The biggest challenge in developing an accurate design and representing it using AutoCAD, they say, was getting up-to-date-plans of the city’s gas, water and sewer lines because any underground utility managed by the utility owner is proprietary.

“So we were out on the streets with a tape measure, measuring from gas cap to gas cap and water cap to water cap. Not being able to acquire that data was definitely a challenge,” said Korosec.

As for the proposed design of the replacement pipe, ductile iron would be used instead of the cast iron found on existing pipes.  It would be a drastic upgrade in terms of durability, according to the team.

Demand, soil conditions, fire codes, water tables, and the depth of cover needed to dig and install a water line are typical factors that go into a pipe’s redesign.  But in Hoboken’s situation, the team also had to consider the potential for corrosion from the salt water stemming from the Hudson River.

“If there’s going to be corrosion, we need to determine if we have to coat the pipe with something,” noted Wiegartner.

Determining the pipe’s thickness was perhaps the biggest engineering calculation in the redesign.

“There were some inputs that we needed for that, so Dennis [Caramante] actually ran a hydraulic simulation of the water system, and we took the highest, maximum daily pressure and applied that to our model,” said Lehle.

The team’s 9th Street redesign includes a full capital plan and calculations of what the actual implementation would entail, such as payment schedules, and costs related to contracting work and traffic due to construction.

“We wanted to take a section that matched up with our priority matrix and use that for the whole city of Hoboken, and our method of identifying key spots that need repair can be applied to other municipalities,” said Fratto.

As complex and frustrating the project seemed at times, the team says the experience of working on an infrastructure challenge was rewarding because of its impact on so many people.

“We wanted to do something to help Hoboken move forward with the needed upgrade to their infrastructure,” said Caramante. “This is the first time anyone at Stevens has worked on the project, so we hope teams in the future build off of what we’ve developed.”

Just as importantly, Brunell says the senior design project gives students who are pursuing a career in infrastructure a real-world experience.

“It gives civil and mechanical engineering students a multidisciplinary experience of what they will face as they move into their careers and the correlations between the utility, the city and the consulting firm.”

Visitors at Innovation Expo will have an opportunity to learn more about the team’s methods and findings and to ask detailed questions.