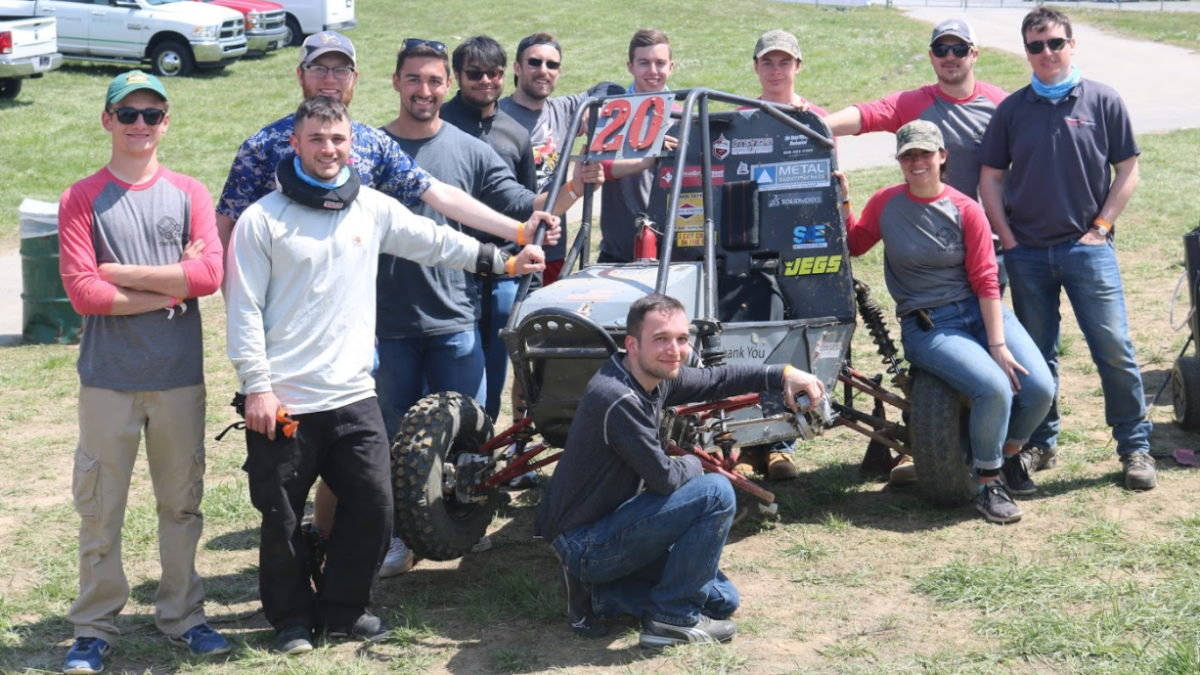 Henry Ford revolutionized the automobile industry with his moving assembly line that mass produced cars in less than three hours. One century later, a dozen Stevens Institute of Technology engineering students blazed their own trail by assembling a single car in less than three months.

The "Dirty Ducks" racing team–an homage to Stevens’ beloved mascot–designed, built, tested, promoted and raced a seven-foot-long, steel and aluminum Baja off-road car, which was a first for the school. According to the Society of Automotive Engineers (SAE), a Baja car is "a single-seat, all-terrain sporting vehicle that is a prototype for a reliable, maintainable, ergonomic, and economic production vehicle."

Last month, before displaying the Baja style car at Stevens 2018 Innovation Expo, the mechanical engineering student team took it to the SAE International’s Collegiate Design Series competition to prove its hill-climbing capabilities, maneuverability and endurance, as well as their own budgeting, communication, project and resource management skills.

"Stevens students have built Formula race cars before, but they usually had to outsource some work," says Joseph Farino, who founded the school’s SAE Club two years ago and captained both the overall car and the powertrain for his senior design project. "I wanted to bring the work back with a car made fully on campus, which we did–at a quarter of the price and a quarter of the time." 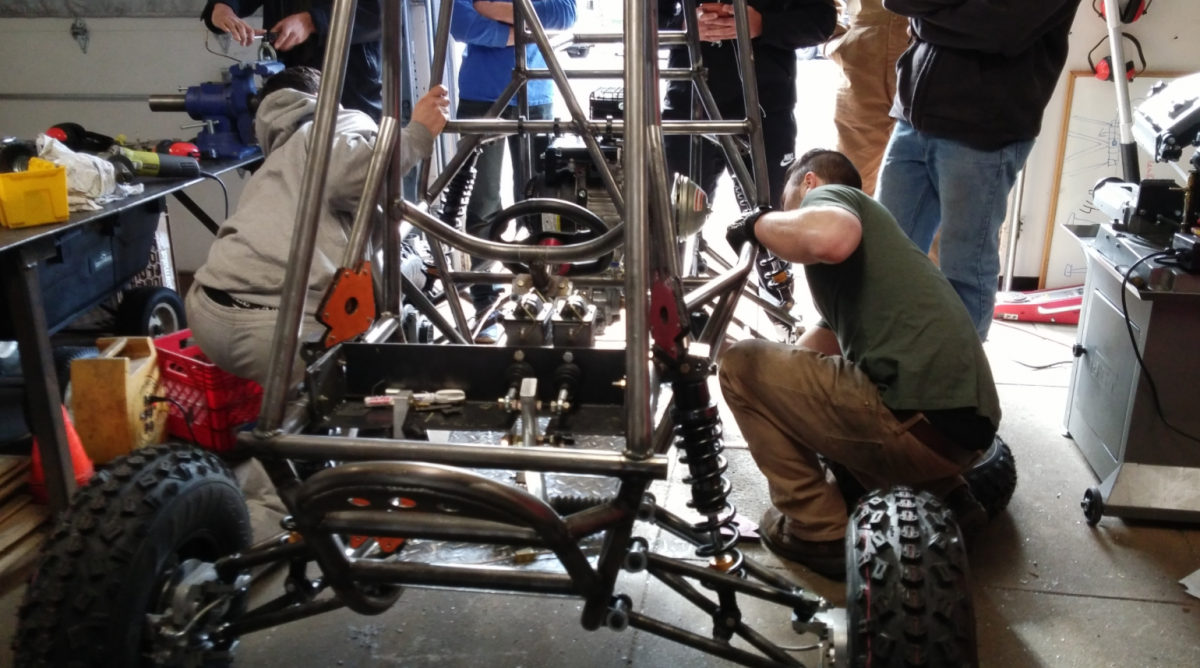 Farino and Raziano working on the car. CREDIT: FSAE team.

The Stevens SAE Club oversaw the project. Farino and his team handled the ten-horsepower engine, transmission and related power delivery. John Raziano, captain in charge of the car’s suspension, and his teammates took care of the tires, springs, shock absorbers and everything connecting the engine and wheels to the vehicle.

"We looked up forums about building Baja cars," Farino says. "We researched components and the competition. We sought advice from Stevens professors, advisors and external sources. For example, the continuously variable transmission [we wanted to use] looked simple but was hard to work with, so we talked to experts on campus and then reached out to an off-roading shop that services lawn mowers and snowmobiles for more support."

During the fall, the students transformed an empty shed into a fully-stocked automobile workshop. Then from January to April, they created a competition-ready car. "We had to be extremely resourceful to fund or find tooling through avenues such as a $2,500 Exxon Mobil sponsorship," Farino explains. Their persistence paid off, and in April they put their car through its paces against 99 other student-built vehicles at the three-day Baja SAE event at Budds Creek Motocross Track in Mechanicsville, Maryland. 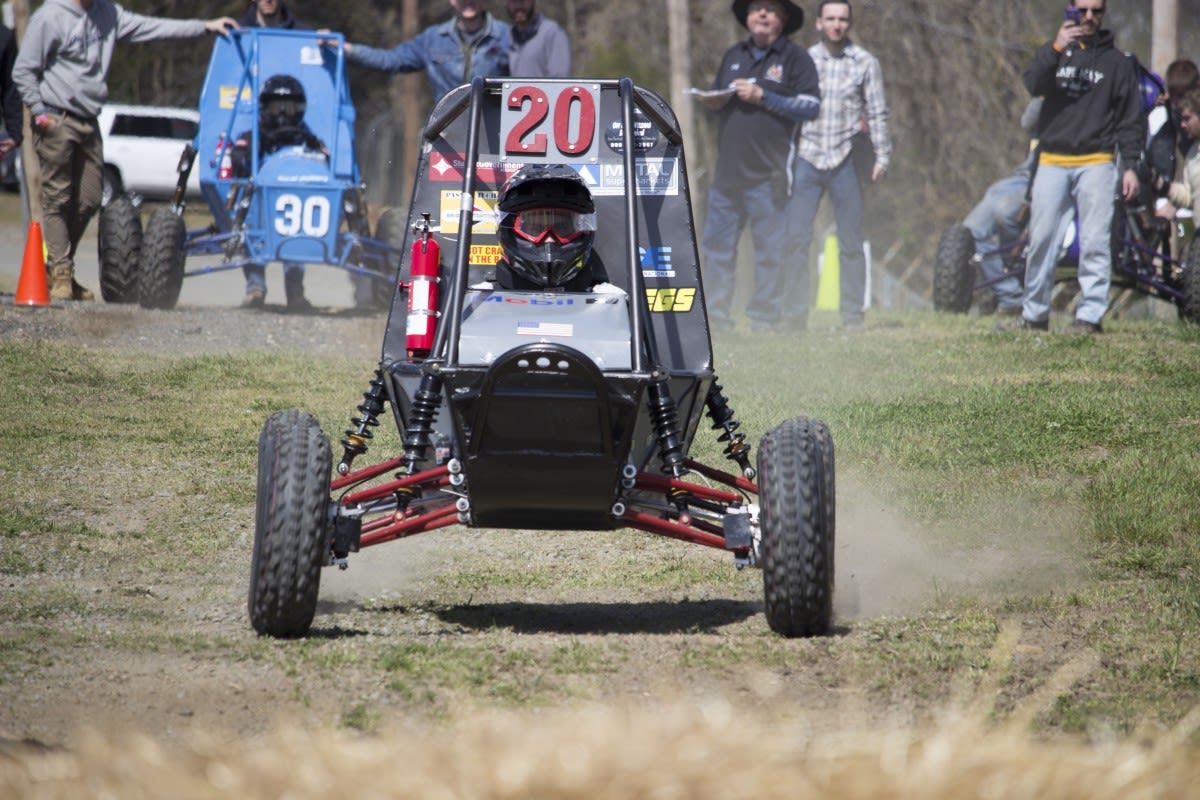 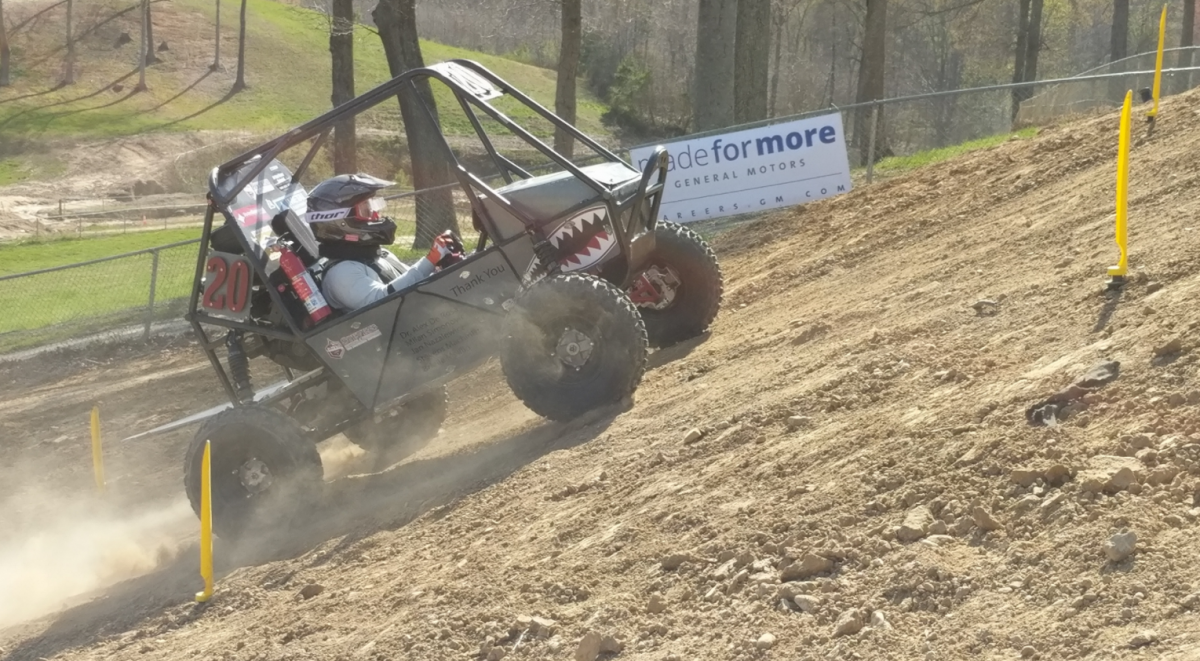 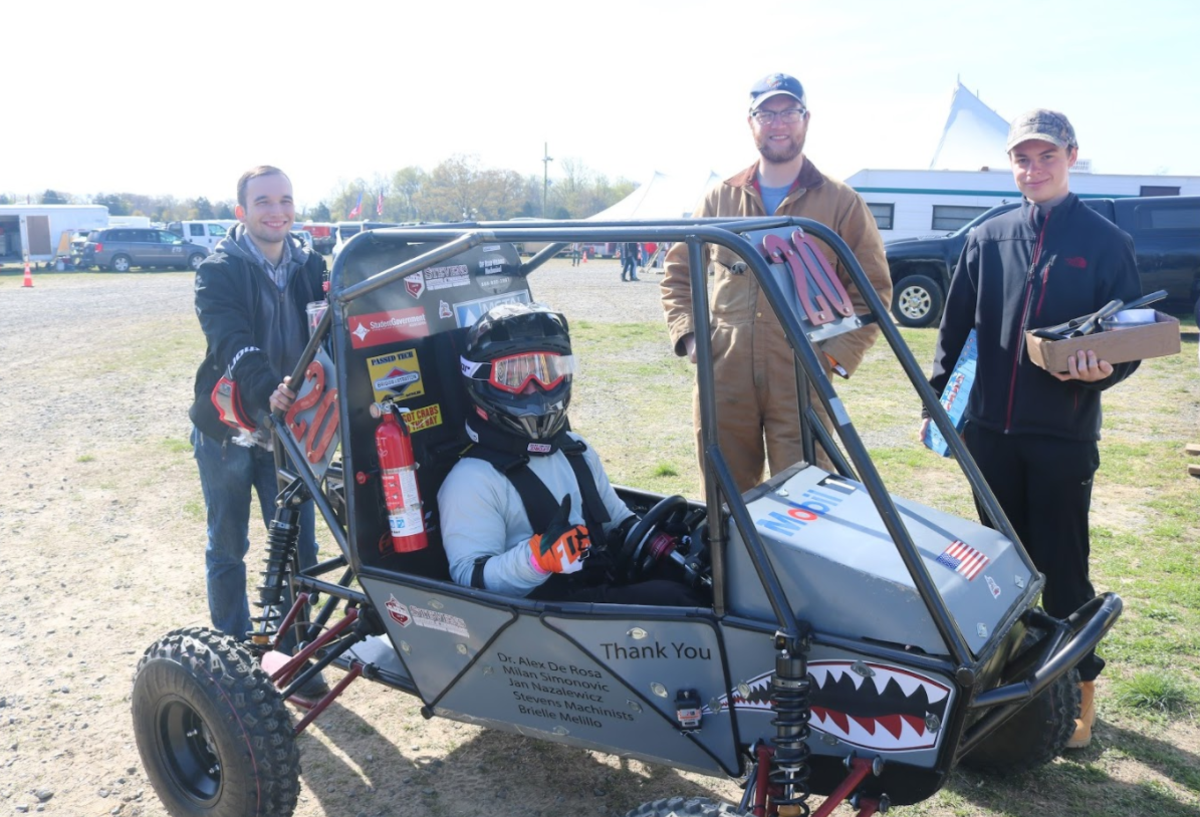 "I’ve been involved with motorsports for as long as I can remember, from driving quarter midget go-karts to working on my dad’s sportsman-class Sprint cup-style full-sized go-karts," says Frankie Thissen, a senior who worked on the Baja car’s powertrain. "Everyone was out to win and didn’t care about the other teams. At Baja, it was the complete opposite. The best teams, such as Michigan and Cornell, help the others the most, and everyone helps create a network of support so all the students can compete and enjoy their hard work. I learned so much from talking to sponsors and other teams. I’m about to graduate, but the Baja event left me wishing I had just finished my first year at Stevens so I could stay in the SAE Club and compete again!"

In addition to delivering sales and design presentations judged by General Motors representatives, the Dirty Ducks dipped their feet in the pond of three competitive events: ascending a 45-degree rise, navigating hairpin turns and obstacles, and persevering through a grueling endurance trial. While they didn't do as well as they might have hoped in the hill climb, they surprised themselves–and others–by finishing in the top half of the pack on the maneuverability track. 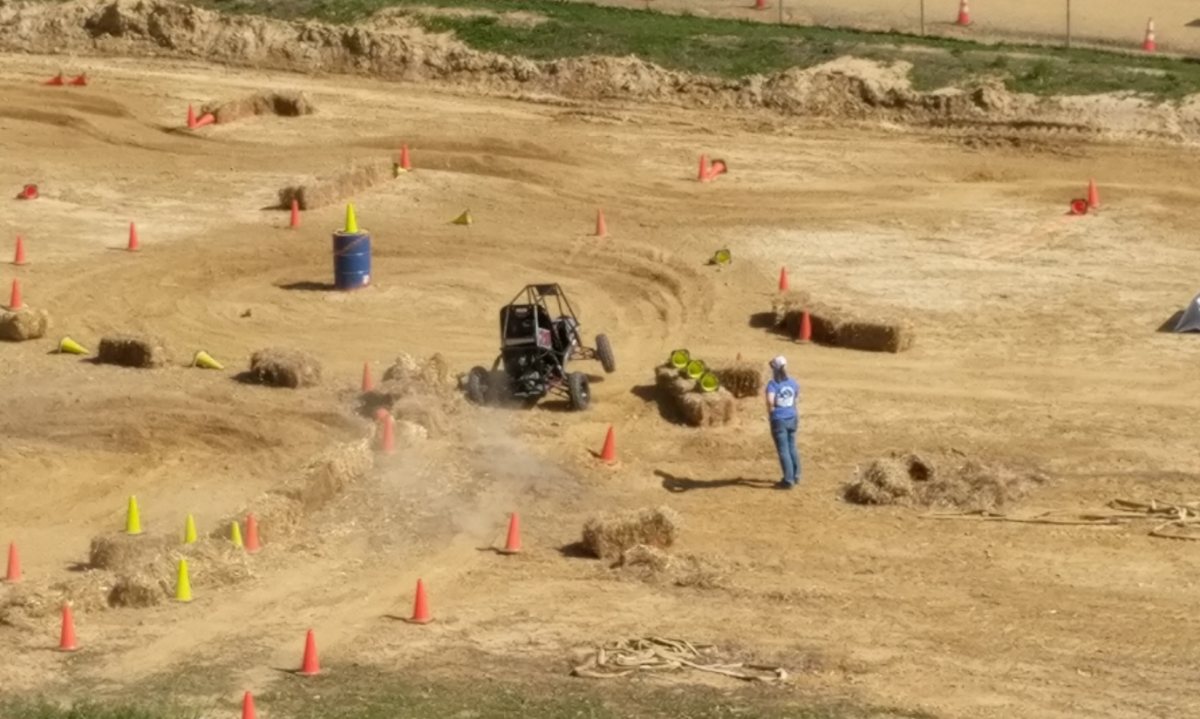 In the endurance race Farino and his alternate driver, Will Graham, a student on the suspension team, completed 16 laps in three hours around the rigorous 1.2-mile track before the bracket holding one of their wheels finally snapped.

"The car has to survive hazards including a pit of sharp rocks, six telephone poles and treacherous jumps," Farino says. "As a first-year team, making it three hours is a huge, amazing accomplishment. Most competitive schools have been involved for several years, and many still don’t make it. We even started in last place, but we made it up hills and through pits where many others got stuck."

A Drive to Leave a Legacy 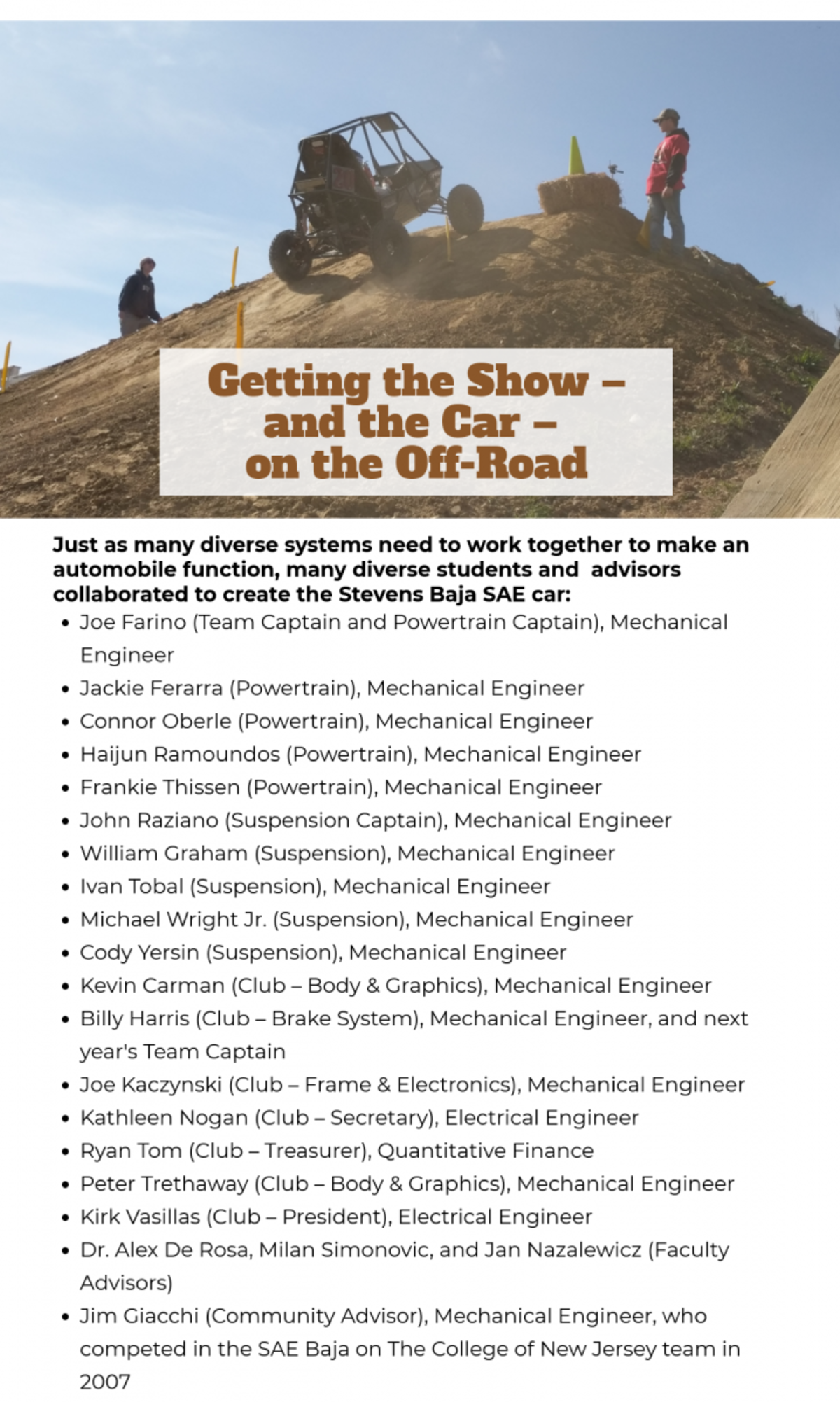 And the Dirty Ducks still aren’t letting grass grow under their tires. After the competition, the team replaced the sheared aluminum bracket with a steel one they made and replaced master cylinders to lock the wheels with less brake pedal force.

"I’ve always been interested in cars and fast engines," Farino says. "I grew up riding four-wheelers and dirt bikes. I drive a Mustang. I even worked on The Fast and the Furious set when it filmed at Picatinny Arsenal. But I had never built a car. It was a massive challenge, incorporating all the mechanical engineering and management principles I’ve learned at Stevens into a real-life application. It made me a better, more well-rounded engineer. And it was cool to put our design to the test on a real racetrack!"

"Joe and John have done an exceptional job involving and leading students across Stevens," De Rosa agrees. "Most schools take two or three years to develop similar cars, but they did it in one year with an extremely limited budget while ensuring that we have excited, knowledgeable undergraduates ready to push this project onward to greater heights."

The real reward, though, was blazing a trail for future generations of Stevens students.

"We beat the odds and got over the finish line, but our biggest accomplishment is the start we gave next year's team," Raziano says. "Now they have a car with our designs and simulations, a team with many members working on their second car, new people (because nothing attracts people to join a club like a completed race car!), a program with a proven framework, a fully-functional and stocked garage and the justified belief that this type of project is viable at Stevens."

"I taught younger students things I wanted to pass on and leave them where I wish I’d been in my second year," Farino says. "Now that we have the backing to continue, future students can create even more innovative designs that will get better every year, and extraordinary presentations as well. I can’t wait to see what they accomplish!" 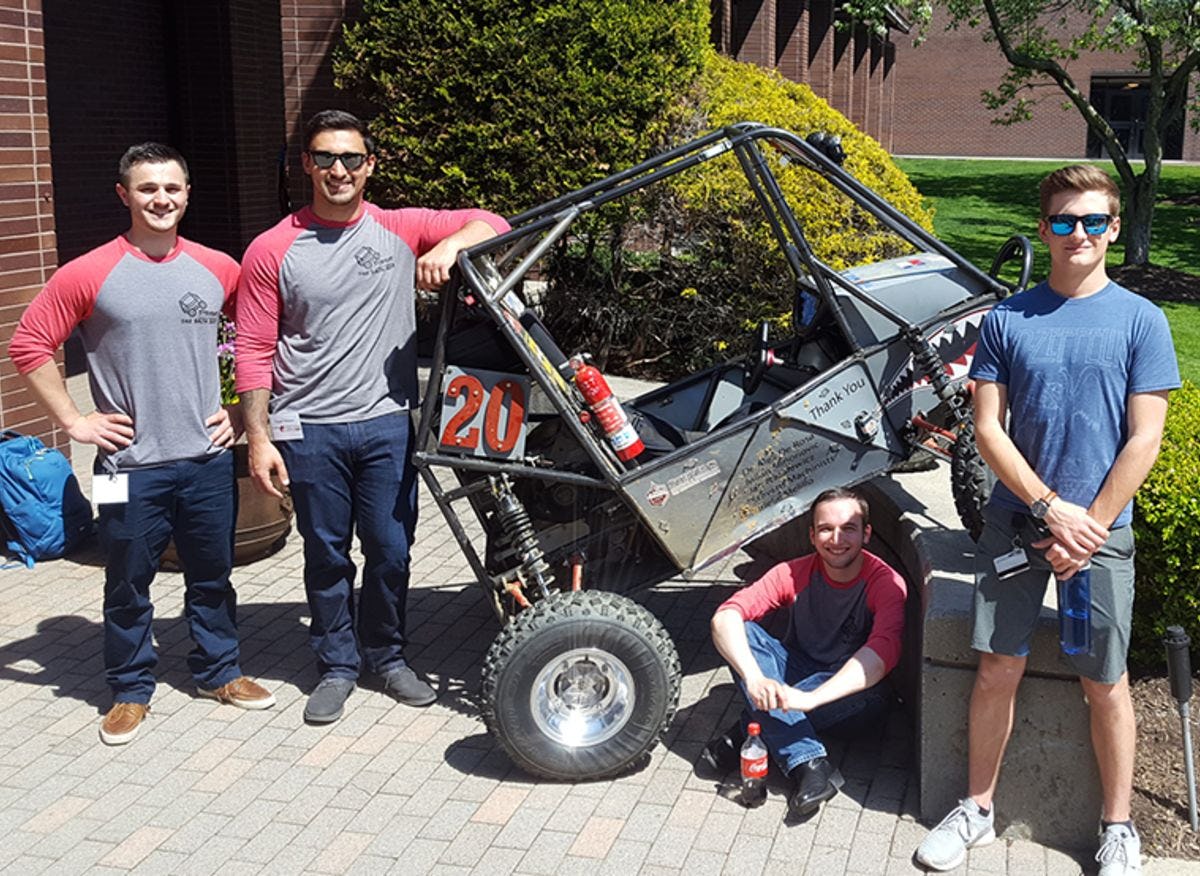 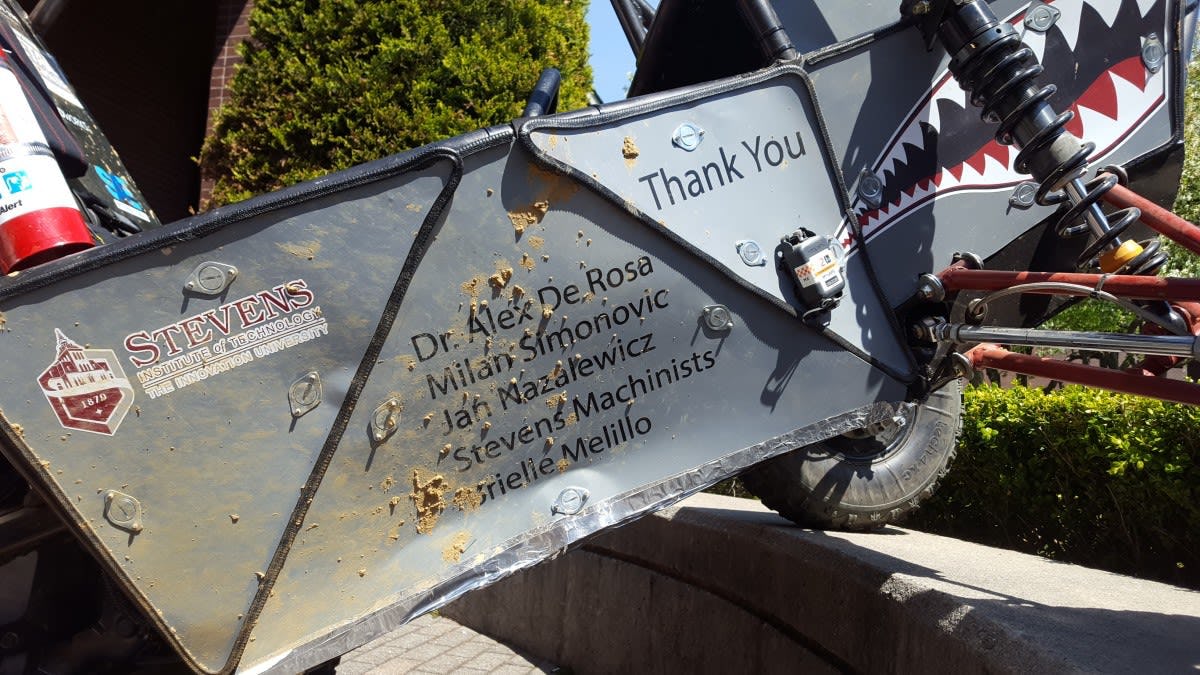 The side of the car after competition, displayed at the Stevens 2018 Innovation Expo. CREDIT: Stevens.